Trump allies tonight lined up to blast pro-Biden sections of the American media after predictions of a Democratic landslide crumbled in early signs of an electoral upset.

The president’s cheerleaders took to the airwaves to lampoon U.S. commentators for consistently writing him off during the course of the campaign.

Despite a strong showing in opinion polls and forecasts from pundits, Biden has failed to flip crucial battleground states such as Florida and Ohio blue.

Biden supporters are cautioning that an early rally for President Trump could be a ‘red mirage’ and that mail-in ballots will tip the balance for Biden when counted.

But Trump’s supporters were triumphant tonight that their man has defied expectations of a drubbing, as he did in four years ago.

Conservative radio host Rush Limbaugh (pictured with Trump in 2019) pointed to a gulf between liberal commentators and voters, heralding Trump’s upset tonight as watershed moment in the American media landscape 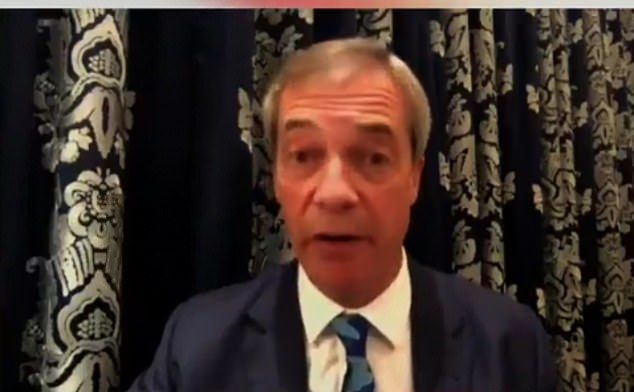 Nigel Farage, UK Brexit Party leader and friend of the president, waded into the American election to hammer the Establishment

He told Fox & Friends: ‘I look at the conventional wisdom and I make it a point never to follow it.

‘It’s always wrong and it is groupthink. Why you want to go along with what everybody else thinks.’

He added: ‘Everybody thinks it is a bunch of Democrats that hate Trump showing up because they hate the guy and they can’t wait to vote against this and that’s what the media has been telling us.’

In his acceptance speech he said: ‘Aren’t you glad this election is coming to an end? I’ve had two phone calls already. One from President Trump. He’s going to win! To all the pollsters out there, you have no idea what you’re doing. And to all the liberals in California and New York, you’ve wasted a lot of money.

Nigel Farage, UK Brexit Party leader and friend of the president, waded into the American election to hammer the Establishment.

‘They should have all been bankrupted after 2016 and they finally will.’

Actor James Wood, a staunch Trump supporter, tweeted: ‘At this very moment we simply do not know. One thing we DO know for certain, however, is that pollsters are a bunch of monkeys – ridiculous, biased, utterly inept, poop-flinging monkeys.’ 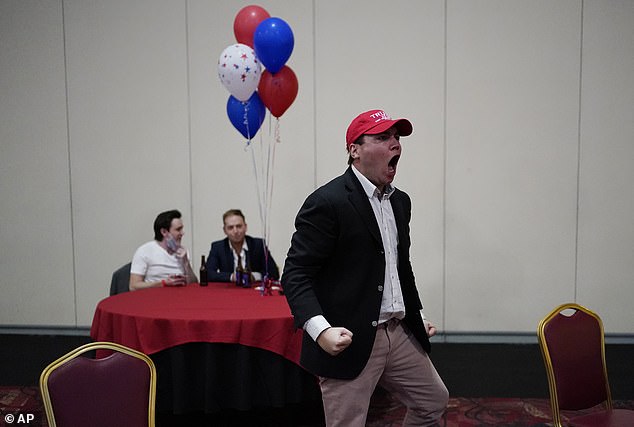 Fox News presenter Steve Hilton said wrong calls were made because American voters are sick to death of having anti-Trump rhetoric rammed down their throats and pulled in the opposite direction.

He said the result was a mass of ‘shy Trump’ voters who do not register their true feelings in opinion polls.

He said: ‘If all you hear day in day out is that Trump’s an evil racist monster then it’s going to make it less likely you’re going to admit to pollsters.’

Trump has repeatedly swatted away damning opinion polls and insisted he will retain the White House, flying in the face of as much as double-digit polling heading into the election.

Pollsters forecast voters deserting Trump, who has come under attack for his handling of the coronavirus crisis and racial tensions in America.