Andrew Sullivan wrote his final column for New York magazine, where he has worked since 2016, on Friday after revealing he was leaving for reasons that were ‘self-evident’

Conservative columnist Andrew Sullivan has revealed he is leaving New York magazine because he misses writing freely without being in a ‘defensive crouch’ – as he bemoaned mainstream media for no longer having diverse opinions.

In his final column on Friday for the magazine where he has worked for four years, Sullivan said that a ‘critical mass’ of staff at the company no longer wanted to associate with him due, in part, to his criticisms of critical theory or woke culture.

The self-described ‘anti-Trump conservative’ said some staff and management had come to believe that any writer who doesn’t conform to critical theory was harming co-workers ‘merely by existing in the same virtual space’.

Sullivan had revealed on Wednesday that he was leaving the magazine, which is owned by Vox Media, and said at the time that the reasons for his departure were ‘self-evident’.

The announcement came just weeks after he was allegedly banned by the magazine from writing about the riots across the US in the wake of George Floyd’s death.

It also came on the same day New York Times opinion editor Bari Weiss revealed she had quit in a scathing resignation letter that slammed the newspaper for fostering an ‘illiberal environment’ and allegedly allowing her to be bullied by coworkers for ‘wrongthink’. 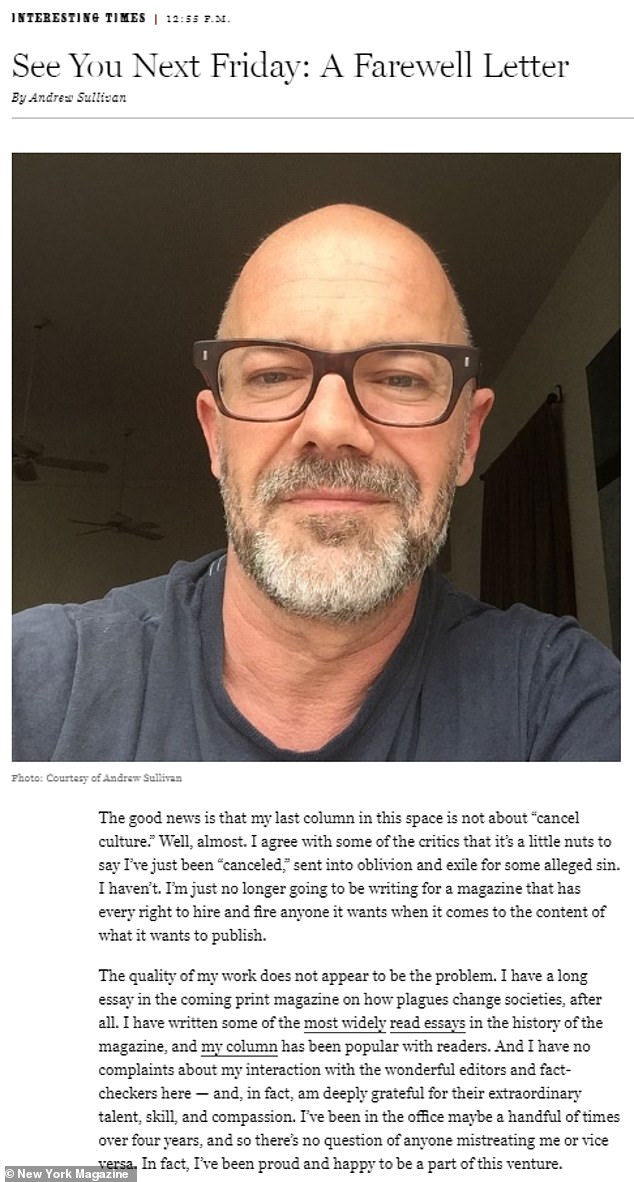 In his final column on Friday for the magazine where he has worked for four years, Sullivan said that a ‘critical mass’ of staff at the company no longer wanted to associate with him due, in part, to his criticisms of critical theory or woke culture 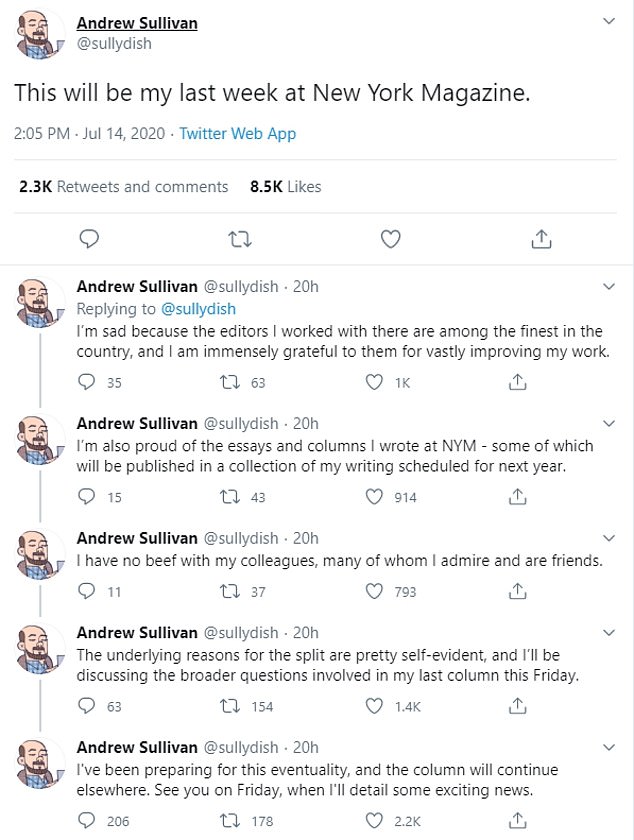 Sullivan had revealed on Wednesday that he was leaving the magazine, which is owned by Vox Media, and said at the time that the reasons for his departure were ‘self-evident’

In contrast to Weiss’ bullying claims, Sullivan started his final column saying he was ‘proud and happy’ to have been part of his venture with the magazine and that he had no complaints about his interactions with his editors and fact-checkers.

‘What has happened, I think, is relatively simple: A critical mass of the staff and management at New York Magazine and Vox Media no longer want to associate with me, and, in a time of ever tightening budgets, I’m a luxury item they don’t want to afford. And that’s entirely their prerogative,’ he wrote.

‘They seem to believe, and this is increasingly the orthodoxy in mainstream media, that any writer not actively committed to critical theory in questions of race, gender, sexual orientation, and gender identity is actively, physically harming co-workers merely by existing in the same virtual space.

‘Actually attacking, and even mocking, critical theory’s ideas and methods, as I have done continually in this space, is therefore out of sync with the values of Vox Media. That, to the best of my understanding, is why I’m out of here.’

The openly gay writer noted that, while he was a conservative, he opposed Donald Trump, supported criminal justice reform, pioneered marriage equality and supported laws to protect transgender people from discrimination.

He said he also plans to vote for Joe Biden.

‘It seems to me that if this conservatism is so foul that many of my peers are embarrassed to be working at the same magazine, then I have no idea what version of conservatism could ever be tolerated. And that’s fine. We have freedom of association in this country, and if the mainstream media want to cut ties with even moderate anti-Trump conservatives, because they won’t bend the knee to critical theory’s version of reality, that’s their prerogative.

Sullivan used his final column to announce he was re-launching his blog, the Dish, which he shut down in 2015 when he stopped blogging and started working for New York magazine.

He said he missed being able to write ‘freely without being in a defensive crouch’. 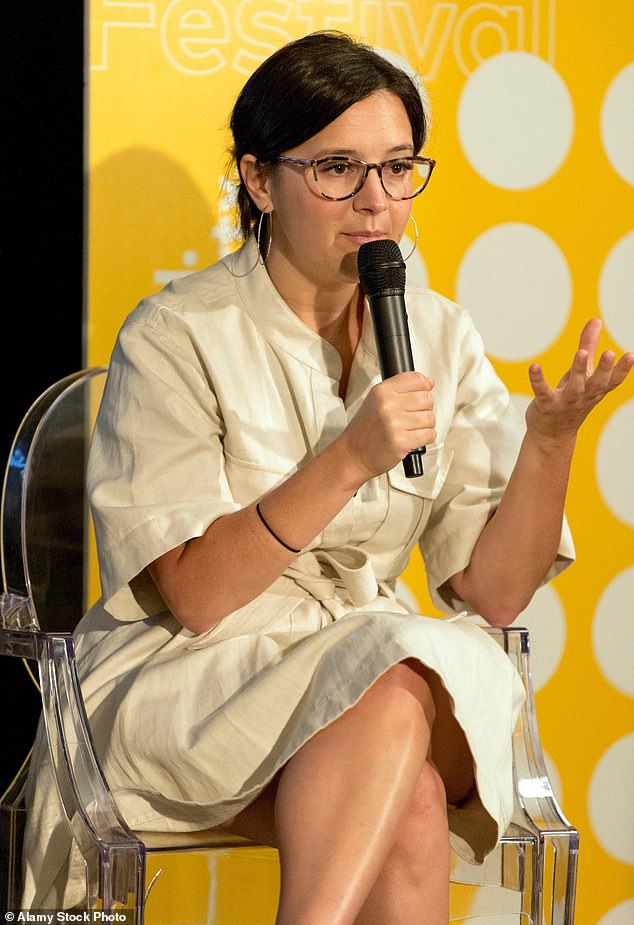 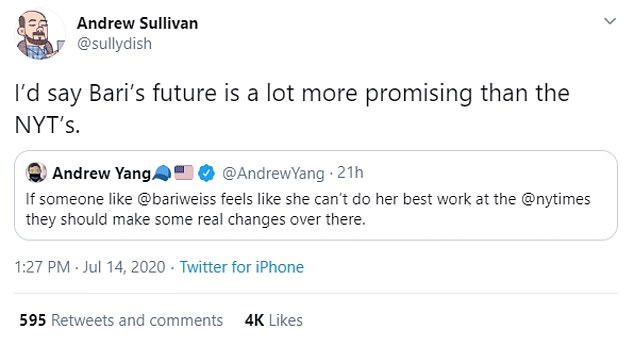 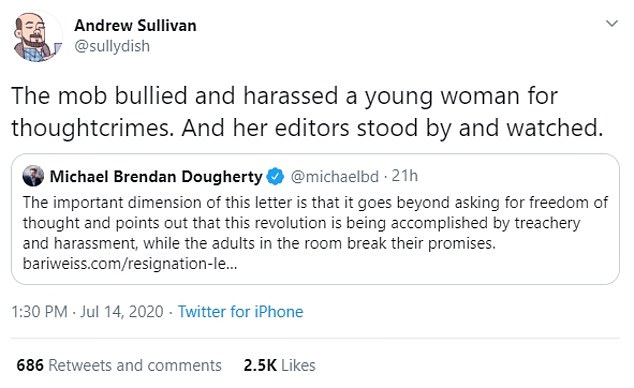 Andrew Sullivan, who is openly gay, is a conservative political commentator who lives in Washington DC.

He was born and raised in the UK but has lived in the US for decades.

Prior to joining New York magazine in 2016, he was an editor at The New Republic.

He founded the Daily Dish, which is a political blog published by Time and The Atlantic before going independent.

Sullivan, who has also written six books, retired from blogging in 2015 and became a writer-at-large at New York magazine the following year.

Sullivan, in his column, dismissed that he was simply being ‘canceled’ by leaving the magazine.

‘I agree with some of the critics that it’s a little nuts to say I’ve just been ‘canceled,’ sent into oblivion and exile for some alleged sin. I haven’t. I’m just no longer going to be writing for a magazine that has every right to hire and fire anyone it wants when it comes to the content of what it wants to publish,’ he said.

Sullivan, who was was born and raised in the UK but has lived in the US for decades, has previously expressed concern that a ‘woke’ culture is crowding out dissenting opinion.

In a June 12 column titled ‘Is There Still Room to Debate?’ Sullivan wrote about an increasingly furious campaign to quell dissent from the central idea that society’s evils stem from discrimination against blacks.

‘In these past two weeks, if you didn’t put up on Instagram or Facebook some kind of slogan or symbol displaying your wokeness, you were instantly suspect,’ he wrote.

New York magazine also faced backlash last month for allegedly banning Sullivan from writing about anti-racism protests across the US.

Sullivan had tweeted that his column wouldn’t be running in mid-June and Cockburn, an American blog run by UK-based news outlet The Spectator, claimed it was because editors didn’t want him writing about the riots.

The blog claimed, citing a source close to New York magazine, that Sullivan had to have his work vetted by sensitive junior editors to make sure it doesn’t trigger them before being published.

Neither Sullivan or the magazine commented at the time.

David Haskell, editor-in-chief of New York magazine, said earlier this week that he and Sullivan had both agreed that his ideas and the magazine’s were no longer a match.

‘Andrew and I agreed that his editorial project and the magazine’s, though overlapping in many ways, were no longer the right match for each other,’ he said in a memo to staff.

‘While I found myself often disagreeing with his politics, I also found it valuable to be publishing work that challenged my thinking.’

‘I am trying hard to create in this magazine a civil, respectful, intellectually honest space for political debate. I believe there is a way to write from a conservative perspective about some of the most politically charged subjects of American life while still upholding our values.’

Haskell went on to say that publishing conservative commentary in 2020 ‘is difficult to get right’ and that ‘thoughtful, well meaning people can come to different conclusions about it’.

Sullivan’s departure from the magazine came on the same day Weiss, who joined the Times in 2017, revealed she was resigning and accused the newspaper of only publishing stories that ‘satisfy the narrowest of audiences’.

President Donald Trump weighed in on Weiss’ resignation on Wednesday when he tweeted that people were fleeing the New York Times.

‘Wow. The @nytimes is under siege. The real reason is that it has become Fake News. They never covered me correctly – they blew it. People are fleeing, a total mess!’ he said.

In a lengthy resignation letter addressed to NY Times publisher A.G. Sulzberger and posted on her website, Weiss said the paper of record was among the media institutions now betraying their standards and losing sight of their principles.

Weiss, who has previously said she doesn’t support Trump, went on to claim that the opinions of those on Twitter had become the newspaper’s ‘ultimate editor’.

Weiss, who once dated SNL’s Kate McKinnon while studying at Columbia University, also accused the outlet of creating a ‘hostile work environment’ for employees that essentially had anything other than left-of-center views.

She claims this mentality resulted in her being constantly bullied by coworkers who have called her a ‘Nazi and a racist’ because of her ‘own forays into wrongthink’.

‘Showing up for work as a centrist at an American newspaper should not require bravery,’ Weiss wrote.