Conservatives would win a 34-seat majority if a General Election were held tomorrow, poll suggests

Conservatives would win a 34-seat majority if a General Election were held tomorrow – but LOSE if Jeremy Corbyn stepped down as Labour leader, poll suggests

The Prime Minister would storm to a 34-seat majority if a General Election was held tomorrow, according to the first authoritative opinion poll to be taken since three Conservative MPs defected to The Independent Group.

After a week of drama in which both of the main parties lost MPs to the new grouping, The Mail on Sunday poll puts the Conservatives on 39 per cent and Labour on 31 per cent.

Behind them come The Independent Group (TIG) on 11 per cent, with the Liberal Democrats on 5 per cent and Ukip on 4 per cent.

However, the picture changes dramatically upon voters being asked about their preferences if Jeremy Corbyn was no longer Labour leader.

The survey by Deltapoll says that without him the Opposition, on 40 per cent, would have a 3-per-cent lead over the Conservatives – enough to make them the largest party in a hung parliament.

Mr Corbyn was rocked by the loss of nine Labour MPs, eight of them to TIG, in protest at the culture of anti-Semitism in the party and his reluctance to work against Brexit.

A further three Tory MPs joined them, citing the ‘grip of Eurosceptics’ in the Conservatives.

The poll makes one of the leading defectors, Streatham MP Chuka Umunna, the most popular choice for leader on 13 per cent, followed by his Commons colleague Angela Smith on 5 per cent and Tory Anna Soubry on 4 per cent. But the size of the ‘Don’t Knows’ – at 63 per cent – illustrates the difficulty that the largely unknown MPs will have in achieving a public profile.

By way of illustration, when BBC sports presenter Gary Lineker was added to the options, he scored 7 per cent – above both former Foreign Secretary David Miliband and Tony Blair. 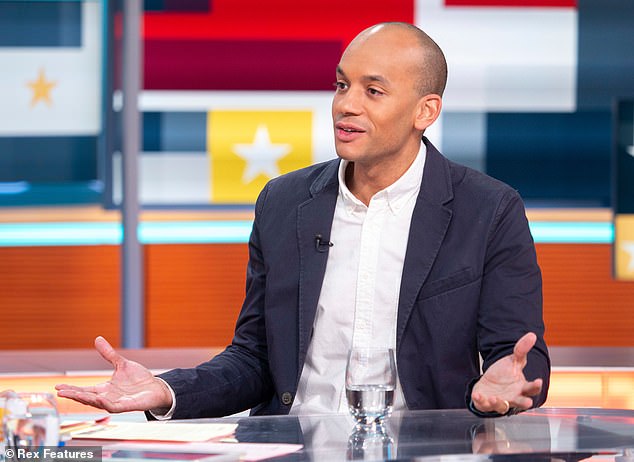 The poll makes one of the leading defectors, Streatham MP Chuka Umunna, the most popular choice for leader of The Independent Group on 13 per cent

Mr Corbyn’s personal ratings continue to sink, with his approval score falling from minus 32 per cent last month to minus 38 per cent following the defections. Meanwhile Theresa May’s ratings improved slightly, from minus 25 per cent to minus 22 per cent.

The dissatisfaction with both of the main party leaders is clear from the fact that, when asked if they wanted Mrs May to resign, half of respondents said they did, compared with 30 per cent who did not. If she were to go, former Foreign Secretary Boris Johnson is still the favourite candidate to succeed her.

Meanwhile a whopping 63 per cent wanted Jeremy Corbyn to quit, with just 20 per cent opposing the idea. 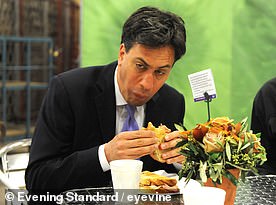 Environment Secretary Michael Gove has won a Cabinet battle to slap bacon and cheese with massive import tariffs if Britain leaves the EU without a deal.

To the delight of British producers and farmers, Danish bacon and foreign cheeses like brie will be exempt from the ‘zero tariff regime’ pushed by Trade Secretary Liam Fox. It should give bacon sandwich wrangler Ed Miliband, above, food for thought…

The poll also shows that public opinion remains effectively deadlocked on Brexit. If a second referendum on EU membership was held tomorrow, 41 per cent would vote to Leave while 45 per cent would choose to Remain.

And the prospect of a No Deal Brexit is a serious concern for nearly a third of voters, who say they are ‘very worried’ that Britain will not be able to cope, while in total 51 per cent are ‘worried’ about it and 31 per cent are ‘confident’.

Deltapoll’s Joe Twyman said it was difficult to calculate the long-term impact of TIG while they possessed ‘novelty value’ without either a leader or any policies, adding that they were likely to hit Labour the hardest.

Mr Twyman added: ‘These results show there is at least some potential for The Independent Group to have an impact on British politics and, so far at least, that impact appears to hurt Labour more than the Conservatives.

‘It is very early days, however, and this could all change very quickly. Only time will tell if The Independent Group are able to make a lasting difference.’

Deltapoll interviewed 1,027 British adults online between last Thursday and yesterday. The data has been weighted to be representative of the British adult population as a whole.