Builder who killed his children, aged 2 and 5, by strangling them then spraying insulation foam down their throats is sentenced to life in jail in Germany

A builder has been sentenced to life in prison for murdering his two children by strangling them then spraying insulation foam down their throats.

Laurent F, 56, who was born in France but lived in Dresden since 1992, was convicted Tuesday of murdering five-year-old Leo and two-year-old Maya in May 2019.

He was also convicted of the attempted murder of his ex-wife Marieta, who was the mother of the two children. He will serve a minimum of 20 years behind bars.

Laurent F, 56, (left) a French-born builder living in Germany, was jailed for life on Tuesday for the murder of his two children in May last year 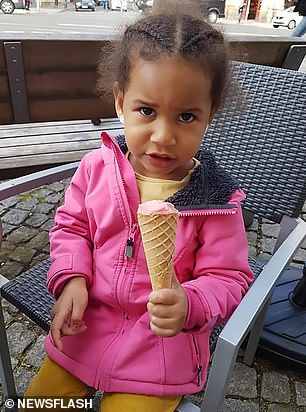 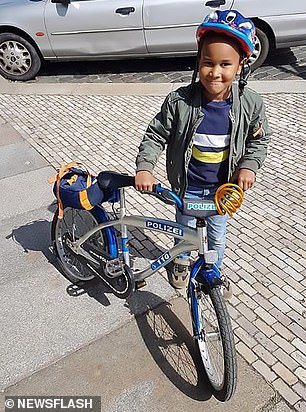 On the day of the murders, Laurent took photos of two-year-old Maya (left) and five-year-old Leo (right),

Prosecutors said Laurent killed his children in order to get revenge on his ex-wife after she separated from him and damaged his ego.

On the day of the murders, Laurent had been looking after the children took photographs of them both – Leo sitting on his bike and Maya licking an ice cream.

Shortly afterwards he called Marieta, who agreed to come to his house later that day and bring cuddly rabbit toys that Maya had left at her house.

Laurent then took the children home and strangled them. He then sprayed insulation foam down their throats, sealing their airways.

After that he placed the children into bed, as if they were sleeping.

When Marieta arrived at the property several hours later he refused to let her see the children, saying they were in bed.

When an argument broke out he attacked her – hitting her over the back of the head with a large stone.

Marieta, who is of Senegalese descent, survived the blow because she was wearing a wig and managed to crawl to the front door.

Laurent then began strangling her until the fight was interrupted by a witness.

Police and ambulance crews were called, but were unable to resuscitate the children. Marieta was taken to hospital.

A coroner told the trial that the children died from a combination of ‘massive, long-lasting compression in the neck area and airway [blockage]’.

Laurent was examined by psychologists during his trial, and was found to be an aggressive narcissist who showed a lack of empathy.

However, analysts ruled he was psychologically capable enough to face sentencing.

Laurent’s previous convictions included rape, arson and most recently drug smuggling when he was caught trying to take meth across the border from Poland in December 2018.

The court heard that his construction business had also run into major financial difficulties, which he blamed on his ex-wife.