Contaminated water that ‘could damage human DNA’ could be released into sea, Greenpeace claims

Contaminated water with the potential to damage human DNA could soon be released into the Pacific Ocean, Greenpeace claims.

The utility company operating the tsunami-devastated nuclear power plant in Fukushima, Japan, said last year it will run out of space to store massive quantities of it by 2022.

This has added immense pressure on the government and the public to reach a consensus on what to do with it.

The utility company operating the tsunami-devastated nuclear power plant in Fukushima, Japan, said last year it will run out of space to store massive quantities of contaminated water by 2022 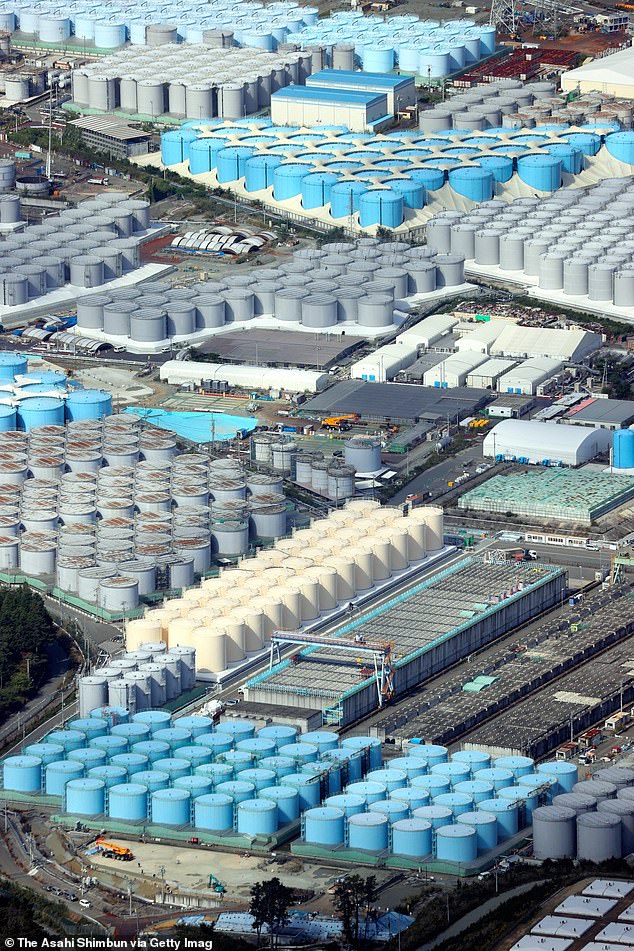 Three reactors at the Fukushima Dai-ichi plant suffered meltdowns in a massive 2011 earthquake and tsunami that devastated the north east of the country.

Radioactive water has leaked from the damaged reactors and mixed with groundwater and rainwater at the plant.

The water is treated but remains slightly radioactive and is stored in large tanks.

The plant has accumulated more than 1 million tons of water in nearly 1,000 tanks. Its operator, Tokyo Electric Power Co (TEPCO), says it plans to build more tanks but can accommodate only up to 1.37 million tons, which it will reach in less than two years.

Greenpeace has claimed in a new report that a decision has been made to discharge the water into the sea.

It was reported on Wednesday that Japanese Prime Minister Yoshihide Suga said he is aiming to make a ‘speedy decision’ on the disposal, with local fishermen said to be concerned that such a move would destroy their livelihoods.

Most radioactive isotopes have been removed by an extensive filtration process. But one remains, called tritium, which cannot be removed with existing technology.

Tritium is only harmful to humans in very large doses, experts say. The International Atomic Energy Agency argues that properly filtered water could be diluted with seawater and then safely released into the ocean.

The environment rights group says in the report, Stemming the Tide 2020: The reality of the Fukushima radioactive water crisis, that doing so will have ‘serious long-term consequences for communities and the environment’.

Greenpeace adds that the radioactive isotope carbon-14, which persists in the environment over thousands of years and concentrates in fish at a level thousands of times higher than tritium, ‘is especially important as a major contributor to collective human radiation dose and has the potential to damage human DNA’. 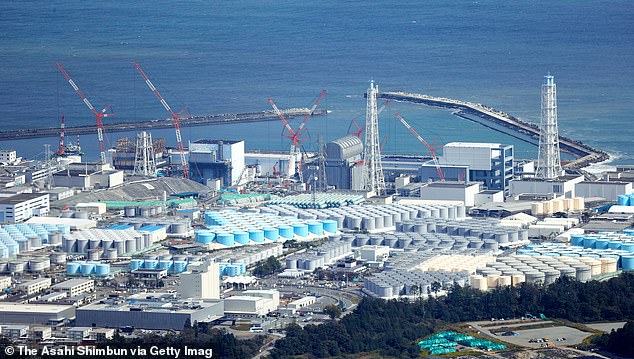 The plant has accumulated more than 1 million tons of water in nearly 1,000 tanks. Its operator, Tokyo Electric Power Co (TEPCO), says it plans to build more tanks but can accommodate only up to 1.37 million tons, which it will reach in less than two years

Shaun Burnie, author of the report and senior nuclear specialist with Greenpeace Germany, said: ‘Nearly ten years after the start of the disaster, TEPCO and the Japanese government are still covering up the scale of the crisis at Fukushima Daiichi.

‘They have deliberately held back for years detailed information on the radioactive material in the contaminated water.

‘They have failed to explain to the citizens of Fukushima, wider Japan and to neighboring countries such as South Korea and China that the contaminated water to be dumped into the Pacific Ocean contains dangerous levels of carbon-14.

‘These, together with other radionuclides in the water will remain hazardous for thousands of years with the potential to cause genetic damage. It’s one more reason why these plans have to be abandoned.’

However, a spokesperson for TEPCO told CNN that the concentration of carbon-14 contained in the treated water is low, adding: ‘Even if the water is continuously drunk by 2 liters every day, the annual exposure is about 0.001 to 0.11 millisieverts, which is not a level that affects health.’

He added that a secondary treatment will be carried out under regulatory standards to check that no radioactive materials other than tritium are discharged.

WHAT WAS JAPAN’S 2011 FUKUSHIMA NUCLEAR DISASTER?

Approaching a decade after the disaster, researchers are still struggling to clean up fuel in the waters of the wasting reactors.

Pictured is an aerial view of the reactors of the tsunami-stricken Fukushima Dai-ichi nuclear power plant stand in Okuma, Fukushima

It’s estimated that plant officials have only located 10 per cent of the waste fuel left behind after the nuclear meltdowns.

And the damaged plant is believed to be leaking small amounts of the radioactive waste into the Pacific Ocean, which could be travelling as far as the west coast of the United States.

Researchers are now pinning their hopes on remote-controlled swimming robots to locate the lost fuel in order to work out the safest way to remove it.

The government has lifted evacuation orders for much of the region affected by the meltdown, except for some no-go zones with high radiation levels.

Authorities are encouraging evacuees to return, but the population in the Fukushima prefecture has more than halved from some two million in the pre-disaster period.