Conversations With Friends was highly anticipated ahead of its release on Sunday – but it hasn’t quite sold all of the nation’s TV critics.

While The Telegraph’s Marianka Swain lavished five stars on the series, which sees former couple Frances and Bobbi end up enjoying a tangled affair with writer Melissa and her boyfriend Nick, The Independent’s Nick Hilton offered a more caustic appraisal, suggesting it was as slow as the late Captain Tom’s charity walking.

Critics have given it mix reviews with many hailing it a success, and better than 2020’s Normal People

Conversations With Friends might yet win over TV audiences but some critics were less than sold on it.

The Independent’s Nick Hilton wrote: ‘Though it is undoubtedly slow, solipsistic, and self-satisfied, the show has an ambient appeal. It is television designed to be watched out of the corner of your eye while scrolling through Instagram, peering in at strangers on two screens simultaneously.’

And The Irish Times’ Ed Power went one step further, describing it as ‘superior’ to Normal People, writing: ‘It feels more substantial than Normal People. Rooney fans will lap it up. For everyone else, the wow factor of a prestige television take on Dublin – albeit empty and lockdown-grim – is sure to bring is own pleasures too.’

Here, FEMAIL shares a selection of reviews of Conversations With Friends, so you can make up your mind whether it is worth tuning in to watch.

Marianka Swain writes: ‘The team behind Normal People reunite to bring another soulful, sexy and complex Sally Rooney creation to life on screen. Can the BBC’s second Sally Rooney adaptation possibly live up to Normal People mania? Well, if there’s any justice, this sensational follow-up should be just as big of a hit – if not bigger. 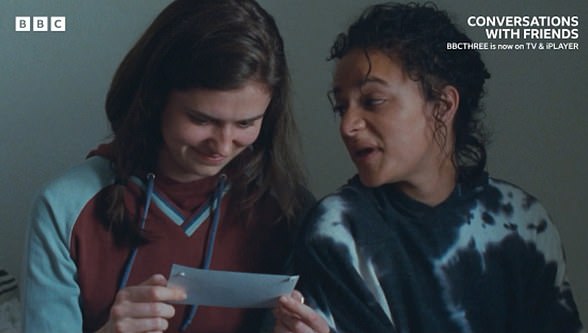 Marianka Swain was a fan of show ahead of its release on Sunday on BBC Three (Pictured: Frances and Bobbi)

‘Admittedly, it’s not as voraciously carnal as Normal People, but that’s because we’ve moved on from teen lust. Although Conversations with Friends (BBC Three) is actually Rooney’s debut novel, it’s a much more complex and challenging premise. Frances (played by magnetic newcomer Alison Oliver) is a bisexual student at Trinity College Dublin who performs spoken-word poetry with her ex-girlfriend, Bobbi.

It’s an inventive ticking time bomb of a ménage à quatre, and the fallout is thrilling – and constantly surprising.’

Phoebe Luckhurst writes: ‘As a novel, Conversations With Friends is extraordinary: intense; cerebral; political; exhilarating; a quiet tour-de-force that coined a genre of acerbic copycats. It experiments with form and text; its characters experiment with unconventional relationships. This adaptation is a watered down version of it.

‘The dialogue is sharp and the universe beautiful, and the whole show is in moments exhilarating, although often a little too pared back. At 12 episodes it is also long and can feel rather baggy.’ 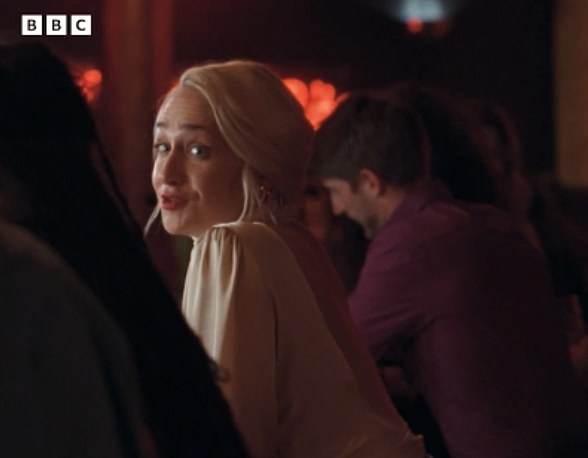 Metro’s Charlotte Manning said the chemistry was ‘all bang on’ in the latest adaptation of Rooney’s work (Pictured: The character of Melissa)

Charlotte Manning writes: ‘It’s one of a recently revived BBC Three’s biggest hopes of 2022, so it’s no surprise the broadcaster realise just how key Conversations With Friends will be in determining it a success.

‘The main four are all bang on with the chemistry, yet Oliver and Alwyn deliver a particular spark as Frances and Nick, perfectly encapsulating the frustration and deep emotional conflict amid the moral dilemma of starting an affair, with the exact person you really want to be with.’

Flora Carr writes: ‘Sally Rooney’s bestselling novel Conversations with Friends opens with the phrase ‘Bobbi and I’, introducing our narrator Frances as one half of a package deal: there is no Frances without Bobbi.

‘Likewise, the new, melancholic TV adaptation from BBC Three and Hulu opens with a shot of the two best friends sitting together, their heads bent over a new poem Frances has penned, as Bobbi reads it aloud.

‘Although the ex-lovers-turned-friends spend most of the series falling for other people, its their mutual love and will-they-won’t-they relationship that provides the cornerstone of the series.

Nick Hilton writes: ‘Though it is undoubtedly slow, solipsistic, and self-satisfied, the show has an ambient appeal. It is television designed to be watched out of the corner of your eye while scrolling through Instagram, peering in at strangers on two screens simultaneously. 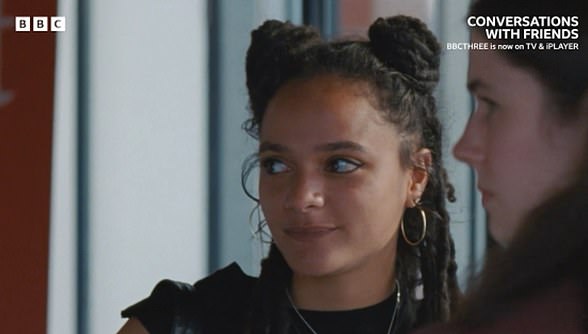 Nick Hilton suggested: ‘It is television designed to be watched out of the corner of your eye’ (Pictured: Bobbi, played by Sasha Lane)

‘And if the prospect of watching the lives of a group of rather entitled millennials unravel at a pace closer to Captain Tom than Mo Farah doesn’t excite you, there are plenty of close-ups of beautiful people kissing to keep you distracted.

‘The problem of protraction (or compression) is endemic in the adaptation of novels, but the pacing of Conversations with Friends feels so indulgently languorous, the milieu (whether in Ireland or Croatia) so oppressively repetitive, that the effect is, at best, hypnotic, and, at worst, soporific.

Conversations with Friends is released on Sunday 15th May 2022, appearing on BBC One, BBC Three and BBC iPlayer for UK viewers. Viewers based in the US can watch the 12-part series on Hulu.