An engine-revving, convicted stalker is tormenting his neighbours by repeatedly revving his deafening motorbike.

‘Wild’ Wayne Reynolds, who lives in Sarina Beach, Queensland, has been accused of causing havoc as other locals battled the threat of bush fires.

In footage captured by A Current Affair, Reynolds is shown firing up and revving his motorbike in the otherwise quiet street.

The vision shows Reynolds’ drive way billowing with smoke as the bike’s engine made an unmissable roar.

The behaviour is said to have continued well into the night as neighbours tried to sleep after banding together to fight the fires.

According to one fearful neighbour, the 50-year-old has angered residents across the neighbourhood.

‘(He) jumps on his bike randomly and does burnouts up and down the street in his driveway all the time I’ve had enough, I’m sick of it,’ she said.

And with a previous criminal rap sheet, locals have reason to be afraid. 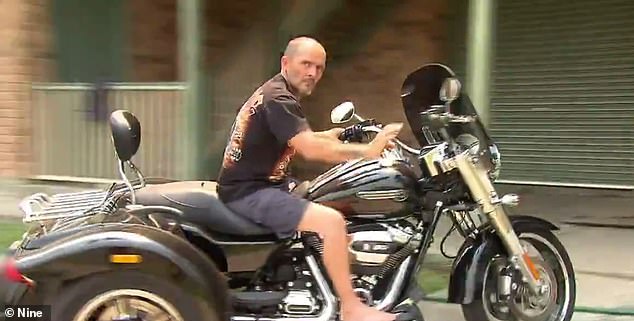 Reynolds’ past offences include stalking and placing a homemade bomb in an ex-girlfriend’s front yard.

When confronted by A Current Affair’s camera crew, he also reacted with a fiery temper, telling its reporter to ‘he’ll find out exactly who rang (the program)’ .

This feeling of animosity was compounded when neighbours called police with allegations he was drink driving the much-loved motorbike.

The action eventually led to police taking him away for further testing and he is set to face court for the charge in February.