This is the adorable moment a white Pomeranian puppy smiles as its groomer shapes it into a perfect snowball.

The dog’s fluffy fur was trimmed into the circular shape by a groomer in Singapore and it obediently sits through its pampering.

Using a pair of scissors, a man snips away little offshoots of hair to perfect the canine’s coat.

The white Pomeranian sits obediently as it waits for its haircut. It looks so comfortable that its eyes start to close and it looks like it’s going to sleep 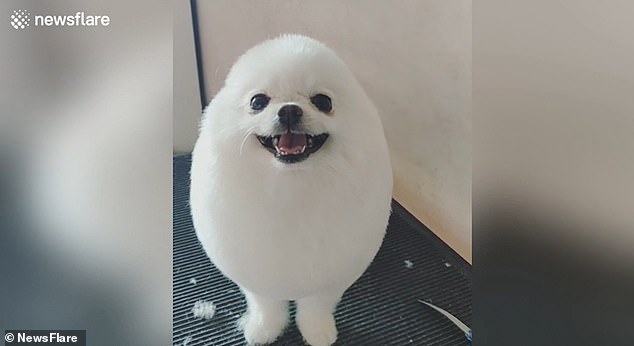 As the groomer admires his work, the dog lets out a huge grin and stares its bulbous marble eyes down the camera

The animal is so comfortable with the blades next to its face that at one point it closes its eyes and looks like its going to sleep.

The cutter takes a moment to check their work is equal – and the pooch lets out a massive grin.

But when the groomer comes in for round two – and tries to clip around the dog’s ears – it looks unsure and winces like a human. 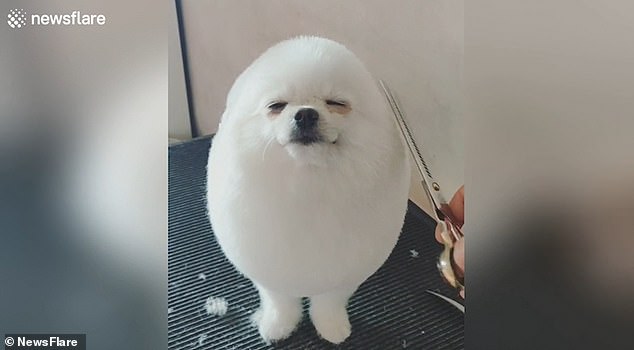 But as the groomer starts to cut away around the dog’s ears, it seems less sure and braces

It keeps its ears tucked tightly behind its head in a bid to keep them out of the groomer’s grasp.

Yet as the clip comes to a close, the Pomeranian smiles broadly again and stands proud in its newly cut coat.

The breed’s fur has to be trimmed every couple of months to keep their rounded shape.

It has to be done using a pair of scissors as they are double-coated dogs and shaving damages their undercoats and leave them unprotected from the elements. 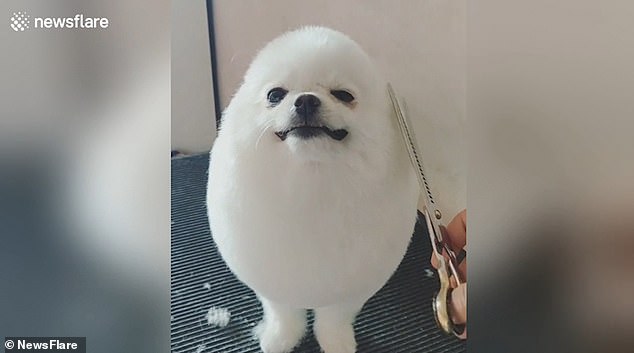 The outer coat can be trimmed to around two inches, so animal experts advise seeking a professional groomer’s help if an owner is nervous.

Pomeranian can have white fur – as shown in the clip – as well as red, orange, blue and brown, with black being the most common.

The rarest colour in the breed is a white Pom with coloured markings on it – called a parti-coloured.

There are also black and tan ones and orange and sable, which are less often sighted.