A Washington state police officer died after being accidentally shot by his training officer during crossfire as a suspect opened fire on them while they were inside their squad car.

Investigators said Bothell Police officer Jonathan Shoop, 32, was accidentally killed during a traffic stop in Bothell, Washington, on July 13 at about 9.40pm, after being fatally shot by his field training officer, Mustafa Kumcur.

The Snohomish County Multiple Agency Response Team said in a press release Friday that Shoop – a US Coast Guard veteran and ‘Student Officer’ who had been on the force for only a year – and Kumcur had pulled over a driver because his Pontiac G6 did not have a license plate.

After initially cooperating with the officers, authorities said the man – who has been identified as Henry Eugene Washington, 37 – drove off, crashing into a man on a scooter before hitting the center median. He then exited his car. 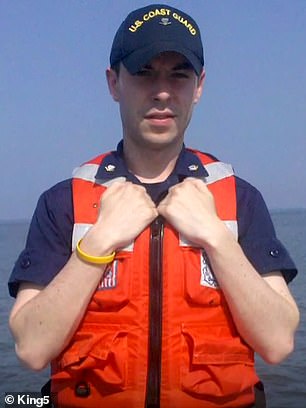 Bothell Police officer Jonathan Shoop, 32 (left), was accidentally killed by his training officer in the crossfire after a suspect opened fire on them. Shoop (right) was in the US Coast Guard before joining the police force 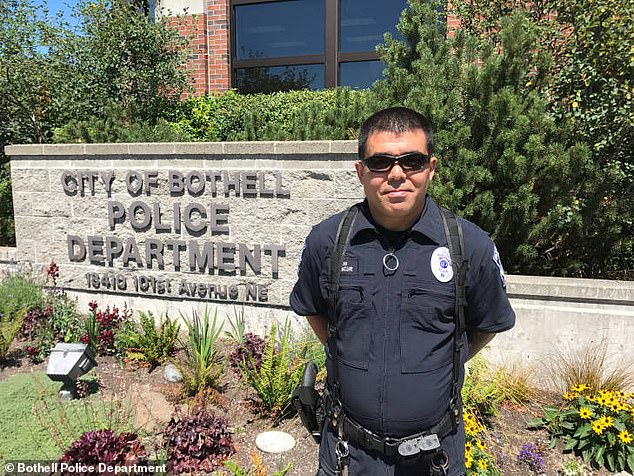 Investigators determined that Shoop died from a bullet that his training officer, Mustafa Kumcur (pictured), fired while shooting back at their suspect while they were in their SUV. Shoop was driving and the shooter was standing on the driver’s side of the car

When Shoop and Kumcur arrived at the crash scene in their police SUV, authorities said Washington, in the process of walking away, switched directions and approached their car from the driver’s side, before firing twice at the officers with a handgun.

Police said the first shot shattered the officers’ car window. The second shot supposedly ricocheted off Kumcur’s service weapon and hit him in the head.

Kumcur was in the passenger seat of the police car when he returned fire, shooting ‘multiple times’ at Washington.

One of Kumcur’s bullets hit Shoop, in the driver’s seat, killing him.

Police said that after the shooting, Washington fled the scene. He hid on the rooftop of a nearby business, at which time he called a 911 center in Kansas, ‘to advise his family he had shot and killed a police officer,’ according to authorities.

While attempting to get off the rooftop, Washington got stuck between two buildings and was taken into custody without incident.

Authorities said they recovered a handgun from Washington’s pants and that during his police interview, he admitted to detectives that he had been driving the Pontiac, hit a pedestrian, shot at the police SUV and called the 911 center. 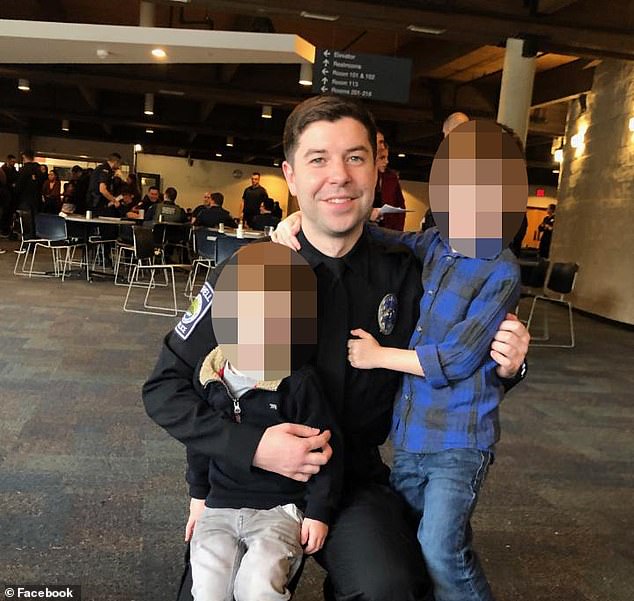 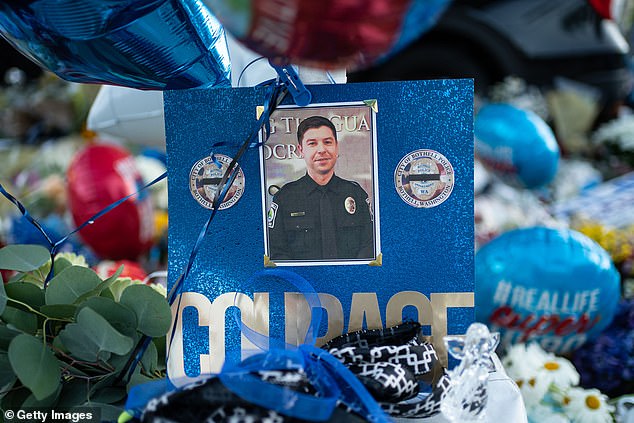 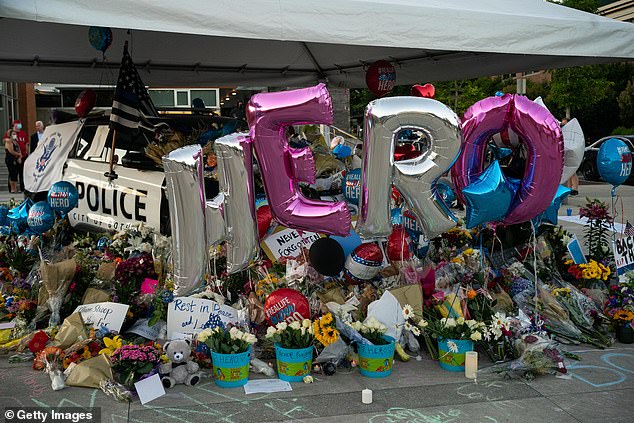 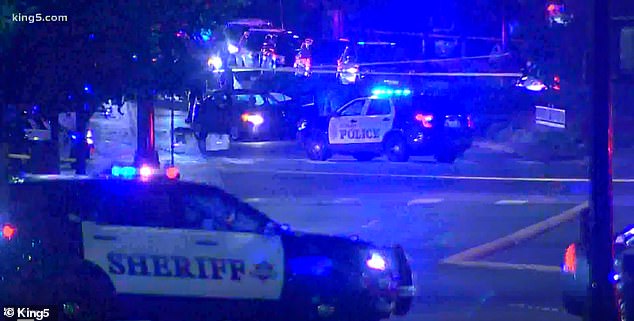 Police vehicles are seen at the location where the shooting took place. During the incident, Kumcur was hit in the head by a bullet fired by the suspect, that ricocheted off his own gun 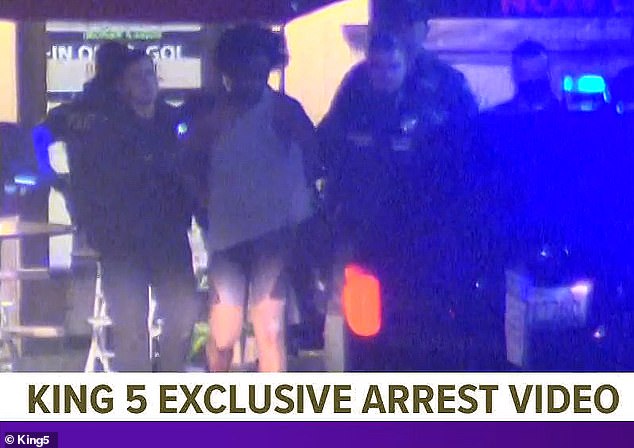 Authorities tracked down and arrested suspected shooter Henry Eugene Washington, 37 (pictured in white). His family have said that he has a history of mental illness

‘The fact that Mr. Washington did not fire the fatal shot is immaterial to his culpability in this crime,’ King County Senior Deputy Prosecutor Mary Barbosa wrote in charging documents, according to ABC News. ‘But for Mr. Washington’s directed attack on the officers, Officer Shoop would be alive today.’

Following the shooting, Kumcur was taken to the hospital where he was treated and then released.

Shoop’s brother told the news site that despite police’s determination that it was Kumcur’s bullet that killed Shoop, he didn’t blame him for the incident.

‘Honestly, it doesn’t change very much for me, that specific detail, it’s simply another detail and it’s a tragic situation,’ Evan Shoop said, adding that his brother hand spoken ‘very highly of his training officer and he loved his training officer, and so do I.’

Evan Shoop noted that if Washington hadn’t allegedly shot first, there would not have been crossfire that led to his brother’s death.

He added that he wanted Kumcur to know that ‘we’re thinking about him and that we love him. We don’t view this chaotic situation as his fault.’

Washington’s charging papers stated that he told detectives that he had shot at Shoop and Kumcur because he thought they might confiscate his car, marijuana and gun, the Seattle Times reported.

The charging papers also noted that when he approached the SUV prior to the shooting, he had shouted: ‘Come on pig.’

Police said in that during his interview, Washington had spoken of hearing voices in his head and making off-topic statements, but said that he ‘was able to understand the questions being asked of him and provided appropriate responses.’

The newspaper reported that Washington appears to be homeless and has had  criminal convictions in Texas and Kansas, dating back to 1997.

Court records in Kansas were reported to show that Washington had pleaded guilty to assaulting a police officer in Junction City, Kansas, in 2017. He was sentenced to time served in jail.

Washington’s family have claimed that he has a history of mental illness, according to KOMO News.

Washington is being held without bond and is expected to be arraigned on August 3.

Shoop leaves behind his fiance, mother and two brothers.