‘Here is all my luck being used ALL AT ONCE!’ Cop narrowly avoids being hit by a passenger train after the crossing barrier fails to lower

This is the shocking moment a police officer was almost wiped out by a train after the crossing barrier didn’t lower.

Peter Stanglewicz and several other vehicles narrowly avoided the passenger train in Mokena, Illinois on November 9.

The terrifying footage was captured on the police officer’s dashcam.

In the clip, officer Stanglewicz is forced to swerve to the left and into another lane to avoid the train.

A car crosses the railway line just in front of the police officer and also narrowly avoids being hit.

The police officer took to Facebook to share the video and express his shock at the near miss.

He said: ‘Throughout my life, I’ve had very little luck. I’ve bought tons of raffle tickets, from little league tickets to charity raffles. Every lottery ticket was a loser. 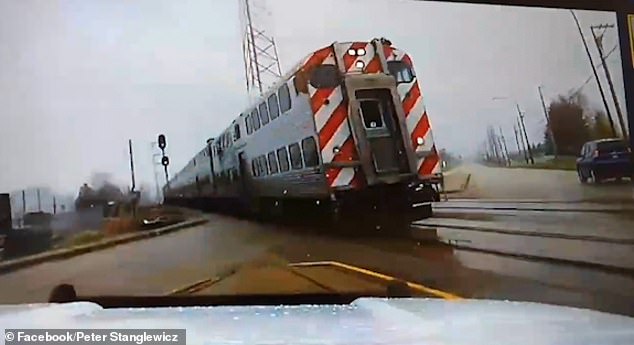 ‘I just thought I wasn’t born with luck at all. Little did I know, I had luck, I was just saving it all up for the perfect time.

‘Here is all my luck being used ALL AT ONCE. If I never win anything again, I’m perfectly fine with that.’

Local news reports said that the barrier failed to lower because a railroad switch shorted.