Police have fined a truck driver for parking in a disabled spot after they allegedly left their vehicle in a loading zone – sparking debate over who was in the wrong.

A video posted on TikTok shows the truckie arguing with a policewoman after he was slapped with a fine for illegally parking in Magnus Street, Nelson Bay.

In text imposed over the clip, he explains he was forced to circle the block four times to find a park after police pulled over in the loading zone – which are reserved for commercial vehicles carrying goods – such as trucks.

The man claimed the officers parked illegally to pick up coffees and he lost his job over the fine.

‘So what am I getting fined for?’ the man says to the police officer.

‘For parking in a disabled [spot], your vehicle being unattended, and it running as well,’ she replies.

The man questions why it would be an issue for him to leave his car running while he is unloading his truck.

‘Your car is doing the exact same thing!’ he declares.

‘Yeah well mate, I’m doing my job – I’m a police officer – and you aggravated that. I asked you to move your car,’ she says.

Under NSW laws, police and emergency vehicles have stopping and parking exemptions.

NSW Police said the incident took place in February this year but they could not provide further details about whether the officers were parked in a loading zone.

The video quickly went viral, racking up more than 37,000 views since it was posted on Tuesday.

But social media users were divided over who was at fault.

‘[The] cop shouldn’t be in a loading zone,’ one person said.

‘One rule for the police and another for everyone else,’ another added.

Others felt the driver should not have pulled over if there was no legal parking spots.

‘Just cop the fine. You won’t get out of it. You are illegally parked over a disabled park, plus keys in ignition and truck running,’ someone else said.

‘Don’t park in disabled spaces. What the f*** is so hard about that?’ another commented.

‘Illegal is illegal. Unattended and running is illegal for ALL regardless of your job,’ a third wrote. 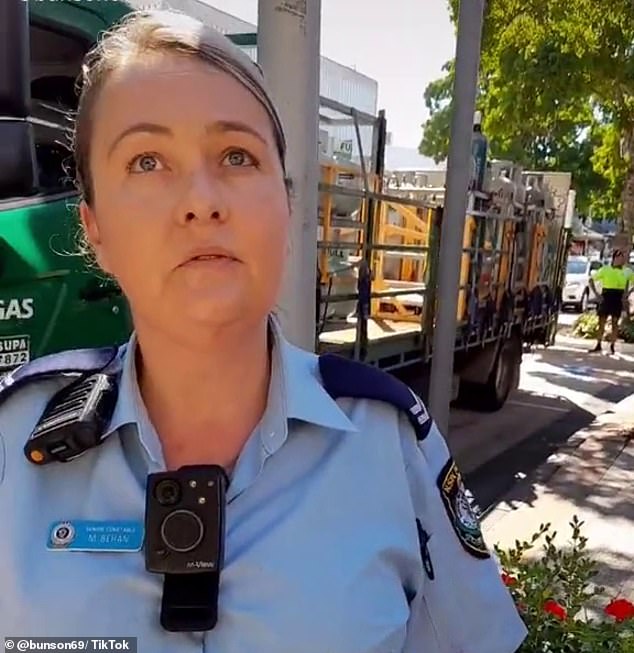 The incident sparked debate, with many saying it seemed unfair police had parked in the loading zone

Some discussed whether police are allowed to park in loading zones, despite NSW law stating only vehicles carrying goods can stop in the bays.

‘Police officers are exempt under the road rules,’ one man said.

‘They can only park there if it’s an emergency,’ another responded.

While it is unclear how much the truck driver will be forced to fork out, the three offences listed by the officer could cost a total of $750.

In NSW, parking in a disabled spot can attract an on-the-spot fine of $580 and the loss of one demerit point.

Meanwhile, leaving a car’s engine running and the vehicle unattended with keys in the ignition are each punishable with a $116 penalty.