Law and ODOR! Kindhearted cop helps to free a skunk that got its head stuck in a yogurt cup – and gets a very smelly thank you

This is the unfortunate moment a kindhearted cop tries to help a skunk with its head stuck in a yogurt cup – and ends up getting sprayed.

Officer Dan McGinty of Cambridge Police Department ‘heroically’ took on the task of trying to free the animal in Danehy Dog Park, Massachusetts.

He came to the aid after receiving a call about the distressed skunk who was wondering around a car park at around 6.30am on Tuesday.

Despite carefully approaching the monochrome mammal, when he flipped the yogurt cup off its head, the officer was gifted a ‘stinky punishment’ for his good deeds.

Flicking its long tail, McGinty was struck with the foul smelling odor.

Officer Dan McGinty (above) tried to help the unlucky skunk on Tuesday morning but unfortunately for him, he ended up with a ‘stinky punishment’ for his good deeds. 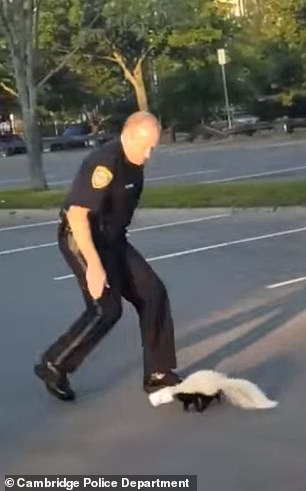 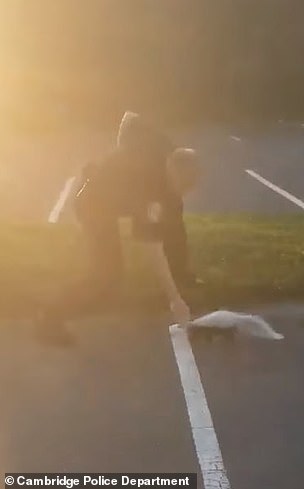 McGinty tried to approach the skunk multiple times (above), often having to back away so that he wasn’t outrun by the animal. Also, presumably to avoid being sprayed.

Police said it took McGinty ‘multiple showers’ to rid himself of the scent and also their fleet maintenance crew to ‘deskunk’ his vehicle.

In a Facebook post they wrote that the incident ended with ‘One lucky skunk – and one unlucky officer.’

‘While we are happy to report that the skunk was freed and uninjured, Officer McGinty’s good deed led to a stinky punishment (and multiple showers),’ they added.

In the footage, the skunk could be seen struggling as it tried to escape and eventually bumped its head into tiling on an embankment.

McGinty could be seen chasing after the creature, running backwards and forward in a bid to help and avoid getting sprayed.

But at the end, in a section also replayed in slow-motion, the skunk flings its tail forward which is when it’s believed the officer was struck.

‘Whoa,’ yelled the officer, to which another replied, ‘You get sprayed?’

McGinty’s reply is not clear but he runs further away from officers, in what could be an attempt to distance himself because of the smell.

Since sharing the clip on Tuesday it had been viewed more than 40,000 times, reacted to by nearly 800 users and shared by more than 400 accounts. 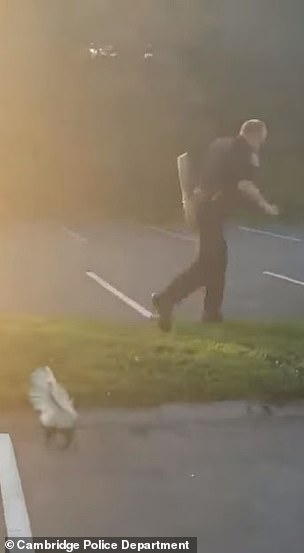 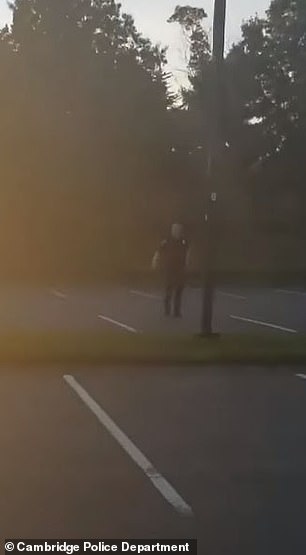 After knocking the yogurt cup off the skunk’s head (left) McGinty ran off. He maintained a suspicious distance from other officers after being sprayed (right)

While many social media users found the clip amusing, many also sympathized with the officer and thanked him.

Mei-Mei Miles wrote: ‘Good job! If I see him, I’m buying him a coffee…or maybe a jug of tomato juice!’

Dawn Macdonald Lordan added: ‘This is the greatest video I’ve ever seen!!!! Thanks so much for rescuing this animal!!!’ 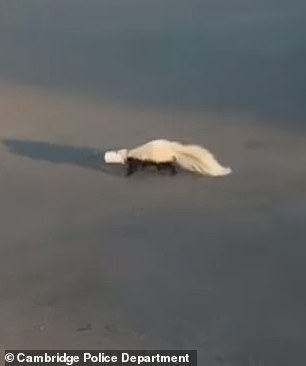 ‘Now that’s what I call above and beyond the call of duty. That officer deserves and award and when he receives it they should show the video,’ replied Frank Lange.

Jennifer Marie Toppi joked ‘That stinks,’ before writing: ‘nice work though putting yourself with in spray range all to protect that poor skunk.

Kate Bergeron praised the act as ‘hysterical AND ALSO so kind.’

She wrote: ‘If this officer was willing to risk being skunked to to help an animal in trouble, it says a lot about his humility and dedication to the community.

‘Such amazing community policing. Also thanks for the laugh.’

Skunks use their scent glands as a weapon against predators, it is the last thing they will do to defend themselves.

Typically they will try to escape but due to their bad hearing and sight often struggle, according to the Spruce Pets.

Other signs to watch out for including hissing, foot stamping and raising its tail.