Cop who faces 11 count indictment ‘should never been hired’

A New York City cop accused of assaulting a motorist in a fit of rage should have never been allowed to become a police officer.

Those concerns, however, were dismissed by a supervisor who allowed Michael Baror to join the NYPD despite warning signs discovered during a psychological review, according to The New York Post.

Baror’s mental evaluation administered in December 2014 paints a picture of a man who lacked ‘anger management’ skills and had ‘a tendency to behave in an impulsive, reckless and careless fashion,’ clear red-flags that should have given the department pause.

But those warning signs appeared to have been ignored, as a second evaluation conducted by different psychologist attested that Baror would ‘be an asset to the department.’

A source who spoke to the Post said that Baror’s case was indicative of an unfair system that grants favors to individuals with connections on the force.

Records attained by the Post show that on the night of December 31, 2017, Baror was involved in a traffic incident while off-duty that ended with him allegedly pistol-whipping another driver and beating him with handcuffs. 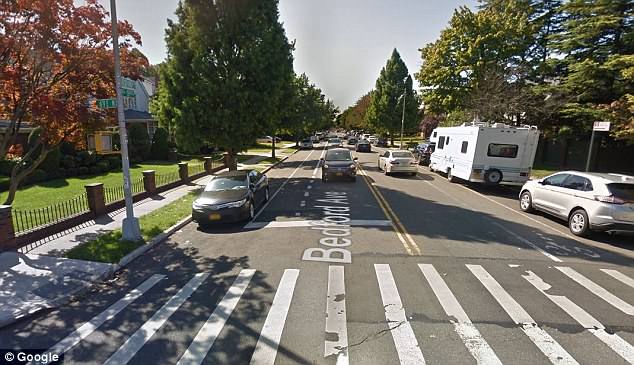 On the night of December 31, 2017, Baror was involved in a traffic incident that left a man with 10 stitches on his face  (Pictured: street where alleged altercation took place)

The incident began at 10.30pm, when Baror attempted to bypass a vehicle driven by James Nacmias on a Brooklyn street and instead rear-ended him. Nacmias’ girlfriend, Jaclyn Araiza, was also traveling in the vehicle.

That’s when Baror allegedly got out of his vehicle and left Nacmias with 10 stitches to his face, at one point shouting: ‘Don’t you know who I am? I’m NYPD!’

An investigation was open following the alleged altercation and eventually led to the Brooklyn District Attorney’s office filing an 11 count indictment against Baror earlier this month.

‘We never expected anything like this to happen, especially with New York’s Finest,’ Araiza told the Post. ‘The man attacked us both. It’s been a traumatic experience.’

Baror’s admission to the NYPD isn’t an aberration, the source who spoke to the Post said, revealing that NYPD officials occasionally get requests to help a friend or relative overcome a hiring obstacle. 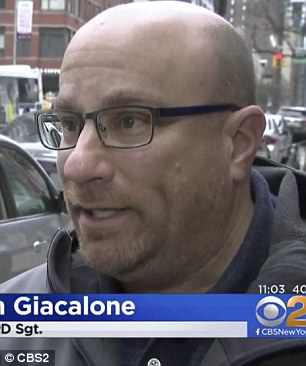 Joseph Giacalone (pictured), an ex-NYPD detective who teaches at John Jay College of Criminal Justice, said the NYPD should have been more cautious

‘The whole appeals process is a mess. There are different paths that candidates are moved along, depending on who wants to see them qualified or disqualified. And there are people you internally ‘go to’ to have an NQ [not-qualified] overturned if they want it that way.’

Just nine days after NYPD department psychologist Benjamin Appel expressed concerns over his history of violent altercations and short temper, Baror was given a ‘rejection review’ by Edward Fitzsimmons.

Fitzsimmons found character witnesses that described the now 24-year-old cop as ‘a well-behaved young man who poses no behavioral difficulty’ and a ‘professional.’

That sterling evaluation helped Baror get over the edge and into a uniform.

‘It sounds like he [Baror] was prepped for the second [evaluation] — he said all the right things,’ said Joseph Giacalone, an ex-NYPD detective who teaches at John Jay College of Criminal Justice.

It remains unclear if Baror had any connections to senior NYPD officials that would have granted him a second evaluation.

The Brooklyn DA has charged Baror with assault, fleeing the scene of an accident, weapon possession, reckless driving and menacing.

Baror faces up to seven years in prison if convicted. Despite the charges, the NYPD has not suspended Baror, who  is currently serving on desk duty.

His gun and badge have been taken away pending the criminal case.