Copa America 2015: Five South American stars who boosted their transfer value during the tournament in Chile

The Copa America has drawn to its close in Chile, with the host nation upsetting Argentina to secure an historic first triumph in the tournament.

We have enjoyed three weeks of magnificent goals, tense games and outrageous pieces of skill, with certain players standing out from the crowd.

As the dust settled on another tip-top Copa, we take a look at five players who have boosted their profile – and their transfer value – during the competition.

There was a clamour amongst European clubs for the signature of Charles Aranguiz before the Copa America and that has now intensified after the host nation’s stunning triumph.

With Arsenal, Manchester City, Bayer Leverkusen and others interested in the 26-year-old midfielder, it seems just a matter of time before he leaves his Brazilian club Internacional and takes the well-trodden path from there to Europe’s big leagues. 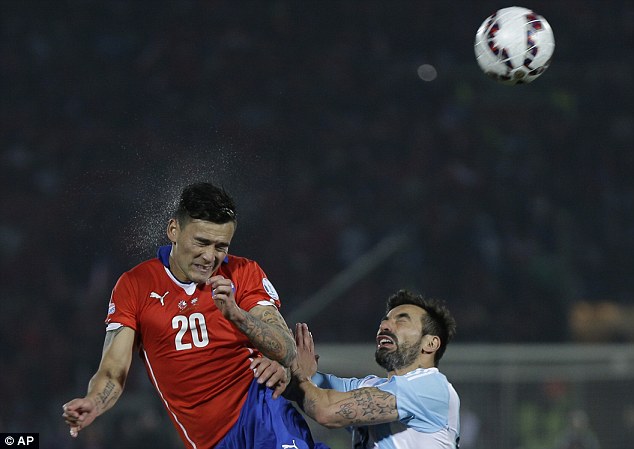 City’s sporting director Txiki Begiristain and manager Manuel Pellegrini watched on as Aranguiz scored twice in Chile’s 5-0 demolition of Bolivia in the group stage and he was one of those to hold his nerve in the final penalty shoot-out against Argentina.

Aranguiz certainly seems flattered by the interest from Europe, saying: ‘It’s something that makes me feel good, it makes me proud that I am doing things well. If it is true, I would love to go.’

While the £8m fee seems a snip for a man comfortable operating centrally or out wide, prospective suitors will have to negotiate a commercial rights minefield which could hike that price up considerably.

It was a bittersweet tournament for Derlis Gonzalez, whose jubilation at converting the winning penalty kick in Paraguay’s shoot-out victory over Brazil was immediately tempered by news that his uncle had died of a heart attack in the act of watching the dramatic moment on television.

While this sadness stole the headlines, the integral role Gonzalez played in defeating Brazil should not be understated. 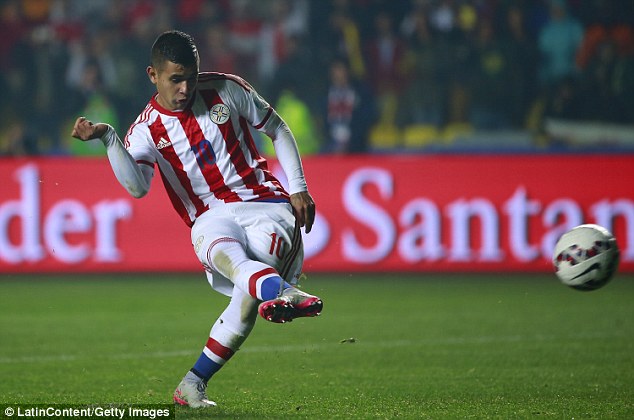 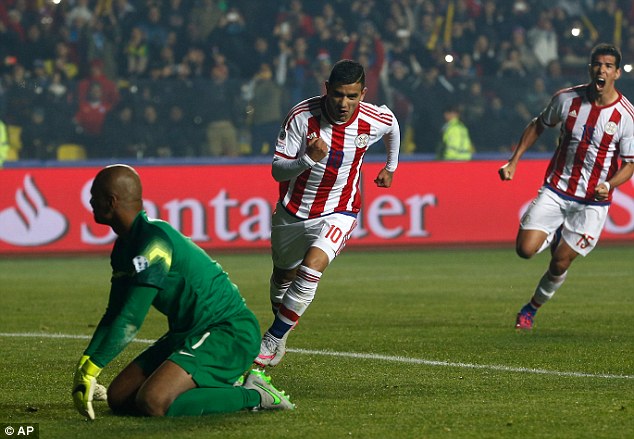 Gonzalez, the Basle forward, made a positive impression during the tournament as his team came fourth

The Basle forward converted a pressure penalty in normal time and had also been excellent as an impact player from the bench in the group stage comeback from two down against Argentina.

Gonzalez signed a five-year contract with the Swiss club after moving from Benfica in 2014 but if he continued this form into the next World Cup cycle, it surely won’t be long before bigger clubs come knocking.

Cueva proudly took his place on the left of midfield in the Copa America team of the tournament released over the weekend and there would have been few complaints.

Peru’s run to another third-place finish at the Copa was a pleasant surprise and while the four goals of Paolo Guerrero captured most of the imagination, the craft of Cueva helped raise his profile beyond his homeland.

The 23-year-old plays for Alianza Lima at the moment and this first taste of a major tournament for his country has been a positive one.

His most memorable moment came when opening the scoring after two minutes against Brazil in the group stage, though Peru’s lead lasted just a couple of minutes. 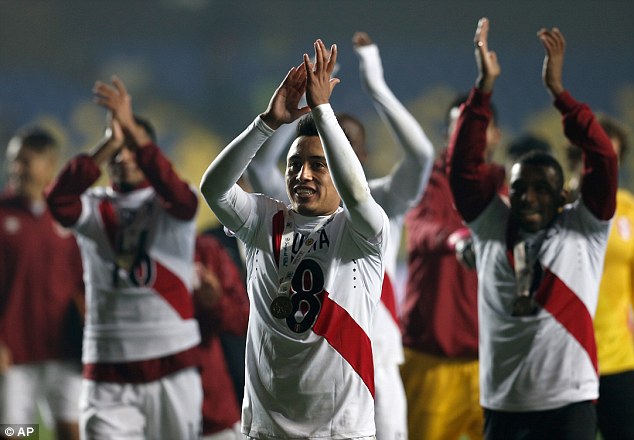 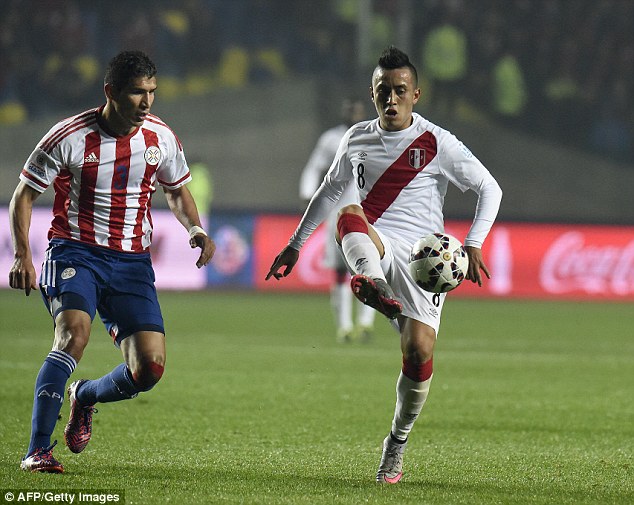 Cueva, who still plays in his homeland, was named in the Copa America team of the tournament

The Lazio defensive midfielder is hardly some undiscovered gem, but the Copa America has had the effect of convincing some of Europe’s biggest clubs that Biglia may well be the reinforcement they can’t do without

Interest from Real Madrid and Manchester United surfaced as the tournament went on and we could see a scramble for the 29-year-old’s signature now that the summer transfer window has opened.

Biglia operated on the right side of Argentina’s midfield trio in all but the opening game and it was apparent that he was an effective counterpoint to the abundant attacking talent in the team.

Biglia has been in European football for nearly a decade, initially with Anderlecht and then with Lazio, whom he helped into the Champions League at the end of last season.

He may well be about to move further up the food chain, though Lazio won’t let him go for peanuts. 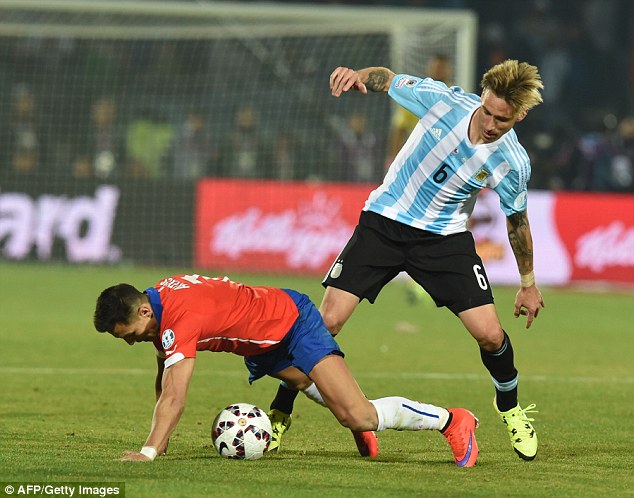 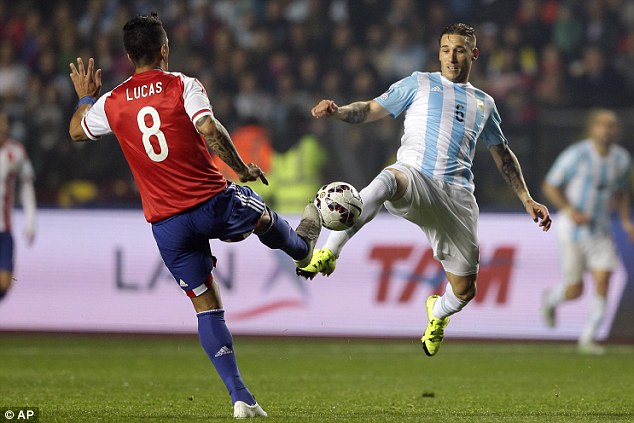 With no victories and just two points, few from Mexico’s second string emerged with a great deal of credit from the Copa America, which was always going to play second fiddle to the Gold Cup which starts this week.

One of the exceptions was Corona and it’s little wonder the 22-year-old is the only man in their squad to be playing in both tournaments this summer.

His coach, Miguel Herrera, recognised that the Twente player was one of the few to turn up, saying: ‘He shouldn’t be the only player to carry the team.’

Still, on a personal level, it’s been positive for Corona, who operated either in behind a front two or on the left and showed what he is made of.

A successful Gold Cup allied to another productive year in the Eredivisie may mean a big time move isn’t far away. 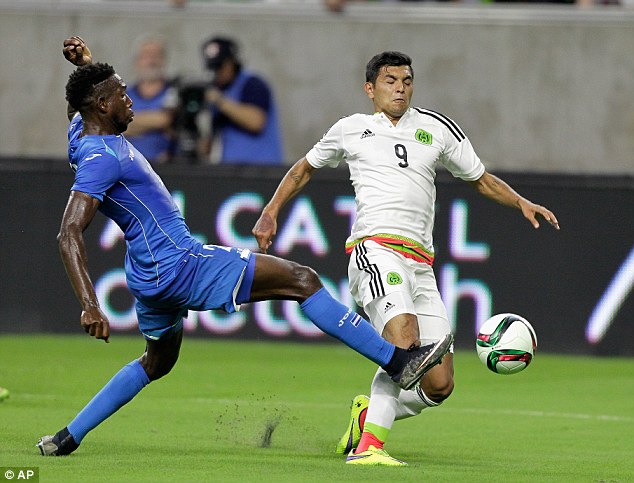