Just like in 2015 Chile and Argentina were inseparable over 120 minutes and the Copa America final ended up in a penalty shoot-out. And just like in 2015, Chile won. Lionel Messi missed a penalty after Arturo Vidal saw his spot-kick saved, but then Lucas Biglia’s miss condemned Argentina to a 23rd year without a trophy.

Although the final was short on goals, it wasn’t short on incident with two red cards, and the tournament as a whole was full of intrigue and controversy. Here are Sportsmail’s awards and analysis of this special 100th year edition of the Copa America.

Best player Lionel Messi: Yes, he blew it, sending his penalty into the New Jersey night sky, before retiring from international football after the game, distraught. But until that point he had enjoyed an almost flawless tournament.

A 19-minute hat-trick against Panama from the bench, a dazzling cameo against Bolivia, dominating performances against Venezuela and the USA, along with being the only player in his team that looked capable of creating anything in the final mean he was the tournament’s best player. Sanchez took the actual Golden Ball award, but he wasn’t even the best player in Chile’s team – that was Arturo Vidal, who curiously also missed from the spot as the final came to a head. 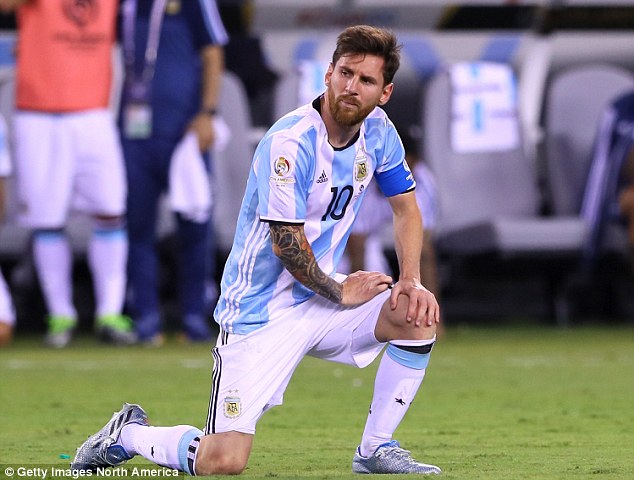 On his knees: A disconsolate Lionel Messi can’t believe he has just lost a fourth major final with Argentina 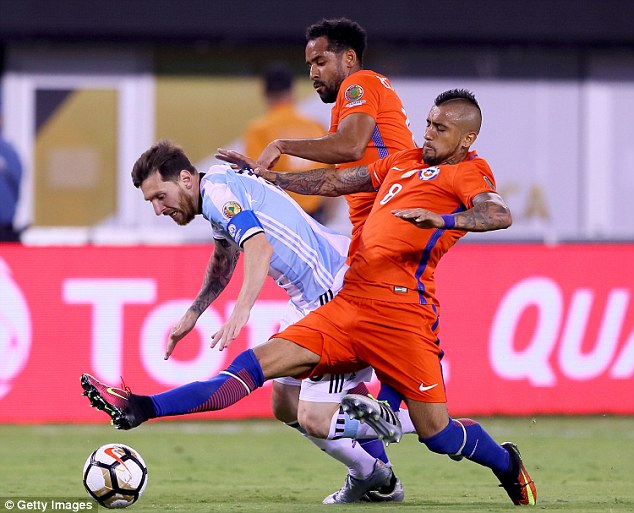 Unexpectedly impressive player Jose Pedro Fuenzalida: The versatile Fuenzalida was excellent for Chile. He came on as a substitute in their first game against Argentina, scoring a later consolation, but from then on was a key presence in their side. The 31-year-old plays in his own country at club level, for Universidad Catolica. Although it seems a bit late in the day for him to head to Europe, clubs would be advised to take a look as he probably wouldn’t set them back too much. He played in various positions in the tournament, although his best is as a right midfielder. 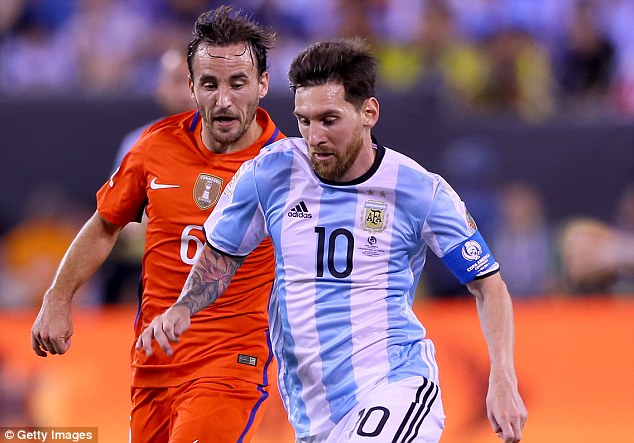 Surprise team Few expected Chile to reach the final again, let alone win the trophy, but considering their achievement last year, it wouldn’t be giving them enough credit to put their performances down as a total surprise.

So Venezuela were the most surprising package. They came within 10 minutes of topping Group C, with Mexico scoring a late equaliser to force them into a clash against Argentina in the quarter-final.

Even in that game they had a period of dominance. There was a 15-minute spell towards the end of the first half in which they could have scored on three or four occasions, including Luis Seijas attempting a Panenka penalty which was caught by Sergio Romero, who couldn’t believe his luck. 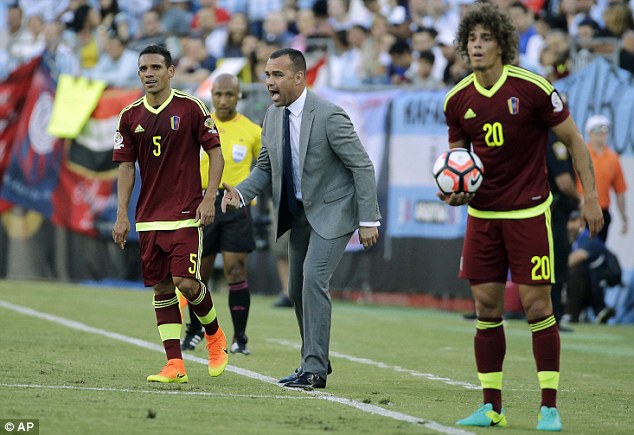 Rafael Dudamel cajoled Venezuela towards a terrific tournament, in which they gave Argentina a real test

Biggest disappointment That Luis Suarez didn’t get to make an appearance because of the hamstring injury he picked up in the Copa del Rey final was a shame. The Barcelona star was desperate to play, as this would have been his first tournament appearance for his country since he bit Giorgio Chiellini at the 2014 World Cup.

After his sensational form during the club season it would have been excellent to see him dazzle for the Celeste, too – this could have been the ‘summer of Suarez’. Still, Suarez managed to entertain us with his touchline histrionics after he wasn’t brought on as a substitute. He punched the dug-out wall in frustration, shouting furiously, and then started to sulk, having warmed up, taped his ankles and then been ignored. The funniest thing of all was he didn’t know he hadn’t even been picked on the bench because of his injury. 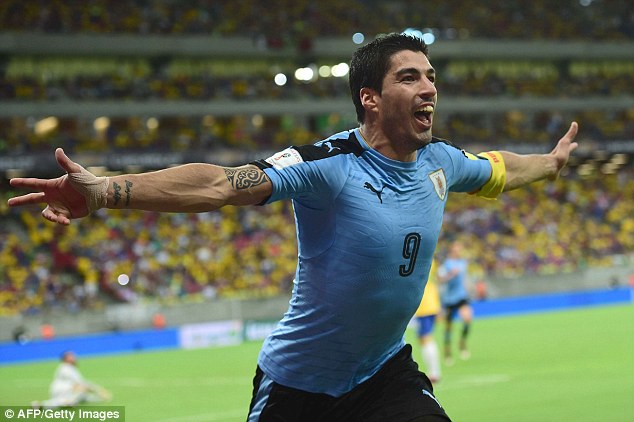 This is the Luis Suarez we’re used to seeing for Uruguay, but the Barcelona striker didn’t feature in the US

Best performance Chile’s 7-0 thrashing of Mexico will live long in the memory. Even at 3-0 they were already putting in the finest showing of the tournament up to that point, but the goals just kept coming as La Roja refused to relent, even as Mexico’s figurative head was smashed into the ground over and over. Eduardo Vargas was the star of the show, scoring a ‘poker’ – four goals. 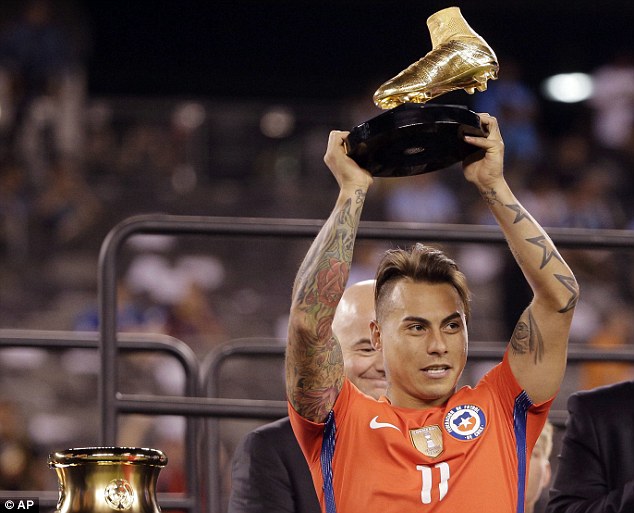 Eduardo Vargas hoists aloft his Golden Boot, an award largely won off the back of his four-goal haul vs Mexico

Best goal There weren’t many stunning strikes in this tournament but Lionel Messi’s rip-roaring free-kick against the USA in the semi-final was certainly one. He beat Brad Guzan on the side of the goal the stopper was protecting, with an effort that somehow managed to dip into the top corner while seemingly always rising. What’s more, it was the goal that made Messi Argentina’s outright all-time top goalscorer, taking over from the legendary Gabriel Batistuta.

WHO REALLY SHONE IN THE USA?

Sportsmail’s team of the tournament:

Hosting comments On one hand the USA have to be commended for staging the tournament without any major malfunctions, given they only knew they were going to host it seven months before the start. They can also boast a record attendance for a Copa America, with an average of more than 46,000 per game.

However, there are various complaints. From expensive tickets to half-empty stadiums – some MLS grounds should have been used for lesser games, instead of cavernous NFL arenas – not everything was a smooth ride. There were obvious problems for teams having to travel huge distances, while others like Mexico benefited from staying in one area. And some sides were forced to play in extreme heat.

There were two notable mistakes with anthems, Chile’s being played instead of Uruguay’s, while later the end of the Chile anthem was blasted over by Pitbull. Stewards didn’t all have a great grasp of where things were – perhaps a consequence of the short lead-in time to the tournament. Fans were often forced to shell out big sums for parking, and at some grounds still ended up a 20 minute walk away from the stadium itself.

Passion for the Copa America didn’t take over any of the cities. Unlike in Chile the year before, where entire towns were interested in games, here they seemed like just another show, which drew supporters who came and went. That’s obviously to do with the size of the cities and the lack of interest in ‘soccer’ from the general public. There was a rumour that the Copa America could be held in the USA every four years, but that was thankfully quashed.

One of the best things about the tournament, typically, in comparison to the World Cup and the European Championship, is that it doesn’t feel as identikit – the culture and sentiment of the host country really shines through. That wasn’t really the case in the US – it was one more act, passing through, instead of something that gripped a nation. 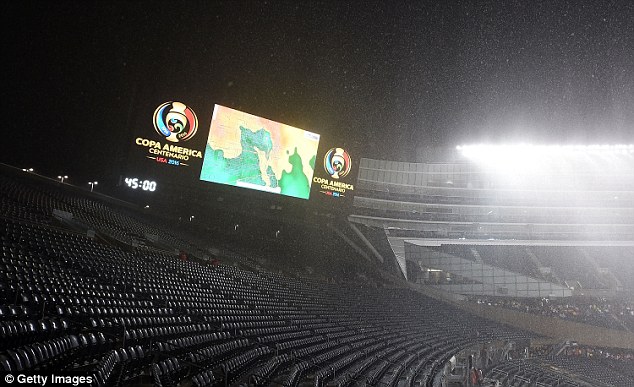 Worst refereeing decision Refereeing standards are never the highest at these tournaments and this year was no exception. Uruguayan official Andres Cunha took the biscuit, though.

Raul Ruidiaz’s handball which knocked Brazil out of the Copa being given as a goal was as bad as it got, with the player clearly punching the ball into the net. To make matters worse, the officials discussed what had happened for nearly four minutes, appeared to be consulting with a mystery party elsewhere, by earpiece, and still ended up making the wrong decision.

Best fans Colombia brought the party. From car park barbecues with food offered around and drinks flowing, to giant flags, face paint, full body suits and dance-offs outside the stadium, their fans made for vibrant viewing to say the least, and were friendly to boot. 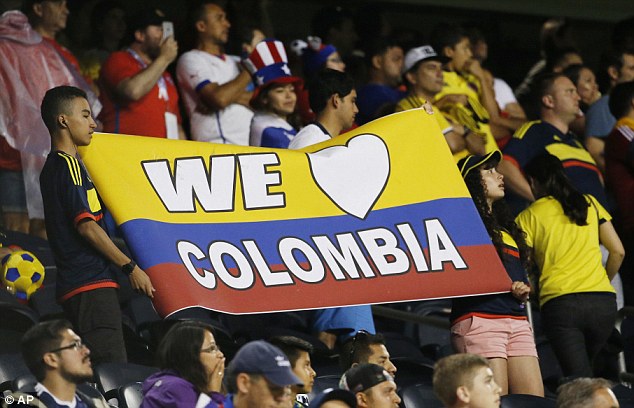 Worst fans Mexico supporters were in with a shout of being best fans too, given they turned up in numbers, joked around with Donald Trump piñatas and created a party atmosphere. But there was another element to their support too, which has to be mentioned. A dislikeable one. The type of fan who throws his drink onto the pitch at opposition players after they score. The type of fan who yells ‘puto’ (fag) at goalkeepers after a goalkick. A homophobic chant which was in very bad taste at the best of times and particularly inexcusable in the wake of the Orlando massacre. But still it came. And as they were crushed 7-0 by Chile, with many of their fans deserting the stadium, some of the remaining supporters started to chant it at their own goalkeeper, Guillermo Ochoa. 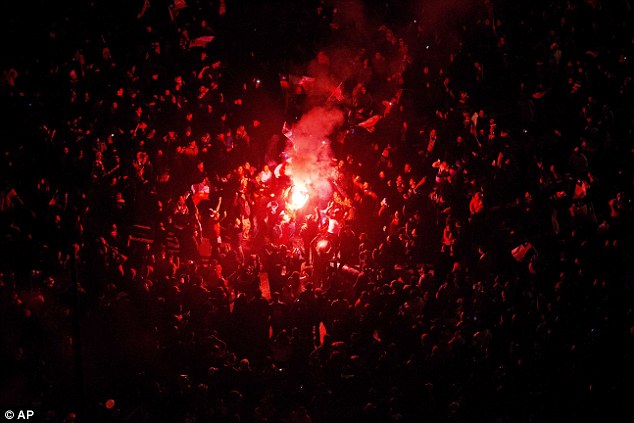 America wasn’t won over by the tournament, but in Santiago the national team’s triumph ignited joyous scenes