Texas police are offering a $4,000 reward to anyone who can help them catch ‘The Wedding Crasher’ – a female thief who steals gifts and cash from newlyweds.

The Comal County Sheriff’s Department in New Braunfels, Texas, first became aware of the scam last November when the suspect stole gifts from a wedding in Spring Branch.

The unidentified woman is known for arriving uninvited to weddings, mingling with guests and then swiping wedding presents when no one is looking.

‘The Wedding Crasher’ has hit weddings in several Texas counties.

Detective Scott Frankes told KSAT, ‘She comes in just after everybody is outside, walks in with a purse. She’s in there no more than about a minute, minute and a half.’

The woman doesn’t take large gifts, instead sticking to gift cards and cash.

‘Cause it’s easy to grab up a stack of cards. Most people know you go to weddings, you’re going to have gift cards or cash,’ Frankes said.

It’s hard to estimate just how much the wedding thief has taken over time, but investigators believes she’s stolen thousands of dollars.

And tracking the stolen gifts is almost impossible.

Frankes said, ‘The difficult part is not all of the victims retained their receipts so it’s going to be difficult in actually tracking everything that was stolen.’

But time may be running out for the suspected thief.

The president of the Braunfels Wedding Chamber, a group of ‘wedding professionals’, said she recognizes ‘The Wedding Crasher’.

Holland plans to check her records to see if she can identify the woman. 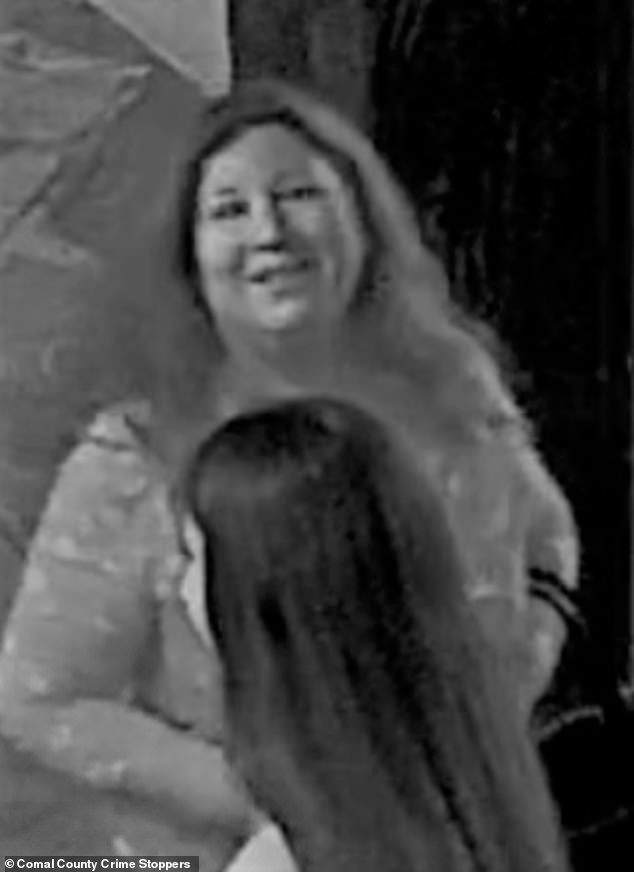 One women whose family members recently married say ‘The Wedding Crasher’ made an appearance at the ceremony.

Speaking to KENS 5 a woman named Amy said, ‘Taken cards from the venue … And we were able to talk to people whose cards were indeed missing.’

She added, ‘You might just have someone posted by the gift cards, but I will never take money or gift cards to a wedding again. I will buy off the registry [if] that’s what they want and it is safe.’

In a Facebook post with pictures, Comal County Crime Stoppers have urged anyone with information to come forward.

‘Let’s not let her ruin anyone else’s special day and bring this crasher to justice,’ they wrote.