Police in South Florida were shocked when a runaway kangaroo was spotted hopping through a residential neighborhood on Thursday.

Authorities with the Fort Lauderdale Police Department were in outright disbelief on Thursday morning when 911 calls reported that a kangaroo was on the loose.

‘I’ve been a police officer for 26 years. I’ve had snake calls and python calls, maybe an alligator, but never heard of a kangaroo around here,’ Officer Robert Norvis, who was part of the capture, told Local 10.

A kangaroo was on the loose in Fort Lauderdale, Florida, on Thursday morning as video shows it hopping through a residential neighborhood

It took authorities and park rangers just 30 minutes to track down and capture the unlikely marsupial near the 1300 block of NE 2nd Avenue around 9am.

Video shared to social media showed the kangaroo hopping through the city streets as cars whizzed by.

‘We just tried to corral it and keep it out of traffic,’ explained Norvis, who added ‘he’s very friendly.’

‘We were able to get a rope around his neck and get him in the back of the car.’

Photos shared by Fort Lauderdale police shows one police officer standing near the kangaroo as authorities try to move the animal to safety. 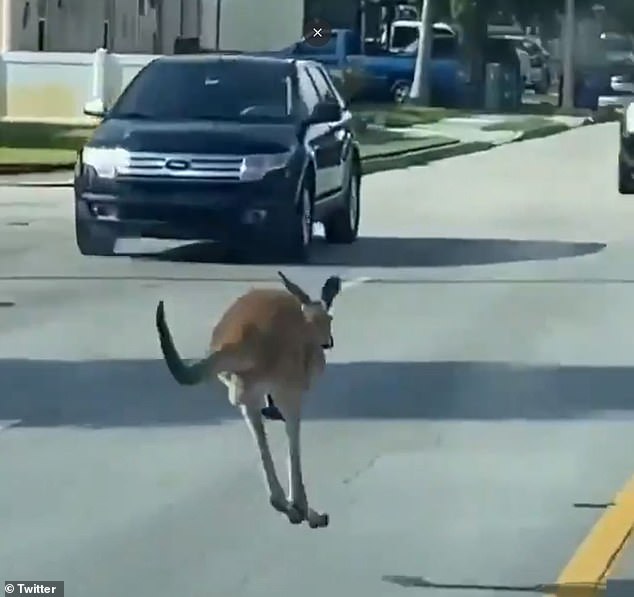 Authorities with the Fort Lauderdale Polcie Department were initially in disbelief as calls started coming in about the runaway marsupial.

Footage taken by Vanessa Morales of NBC 6 shows at least five officers at the scene and the kangaroo with a red leash around its neck.

Two officers then lift the kangaroo and place the furry fugitive into the back of a police cruiser.

Once inside, the kangaroo lounges across the back seat and begins cleaning himself.

The officers later appeared to be coaxing the kangaroo out of the car once they reached a secure location. The kangaroo was ‘jailed’ in the barn where police horses are kept. 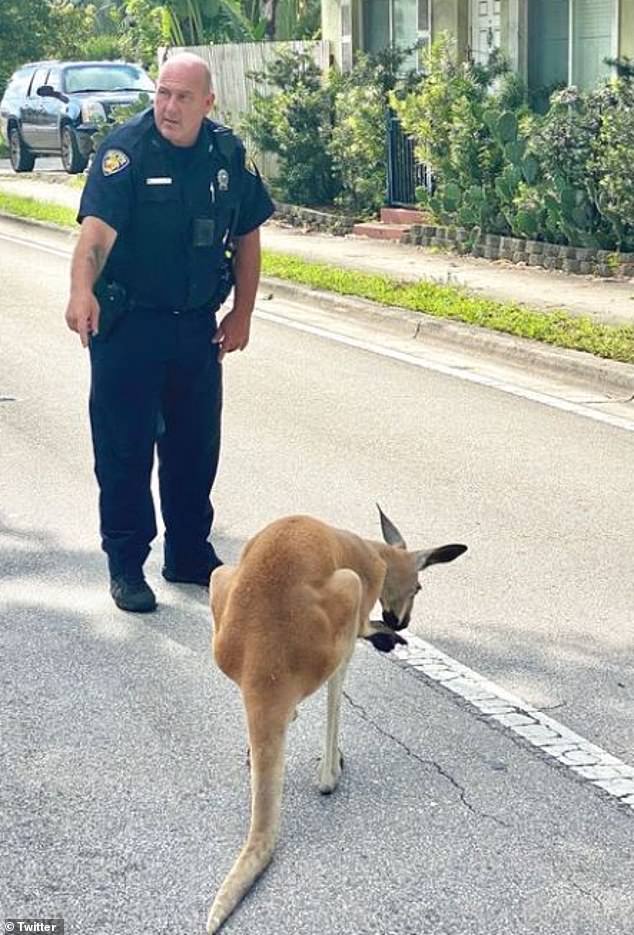 The kangaroo (pictured with a police officer) reportedly belongs to a local resident, but it’s unclear what consequences they’ll face 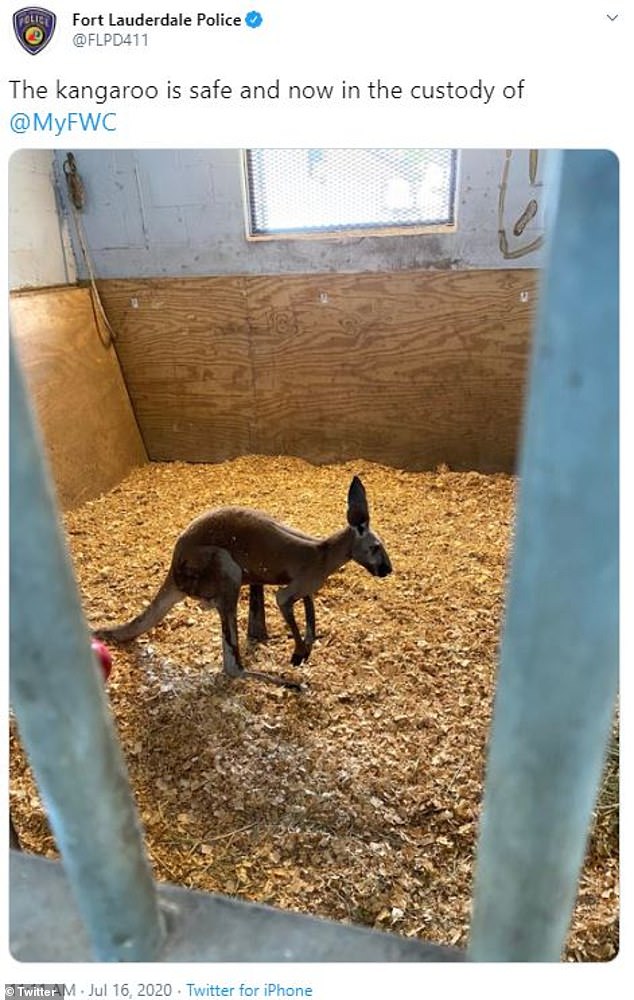 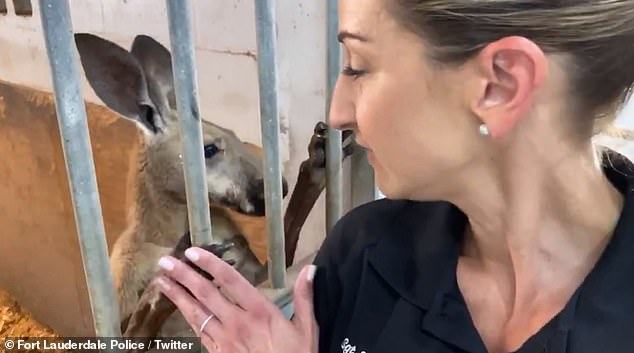 In Florida, it is illegal to keep exotic animals, like kangaroos (left), inside local residences

Authorities were initially confused about where the kangaroo came from since the animal is not native to Florida.

Local 10 confirmed that the kangaroo belongs to a local resident, which authorities assumed was the case since it appeared domesticated.

It’s illegal to keep pet kangaroos, and other exotic animals, inside residences, but it’s not clear what kind of consequences the owner may face.

The decision would be up to the Florida Fish & Wildlife Conservation Commission (FWC). 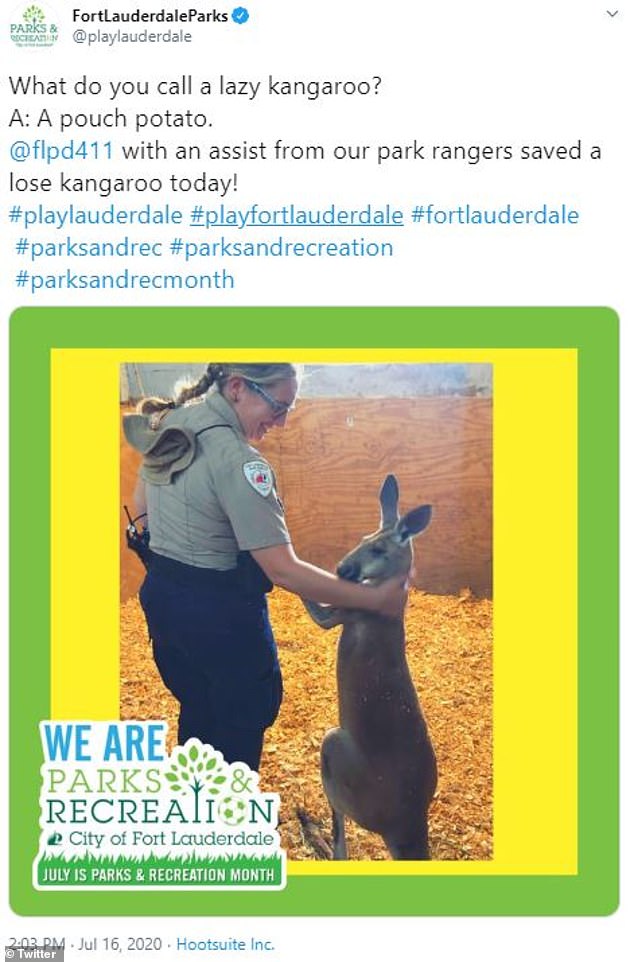 Pictured: The runaway kangaroo with a Fort Lauderdale Parks & Recreation ranger on Thursday

Fort Lauderdale police announced Thursday afternoon that the FWC would take in the kangaroo.

A video shared by authorities shows the kangaroo inside an animal holding cell with grass to eat and play things.

A photo from the Fort Lauderdale Parks & Recreation show the kangaroo with a park ranger in the holding cell.

The Australian Embassy in the United States thanked the Fort Lauderdale police for ‘looking out for Skippy!’ 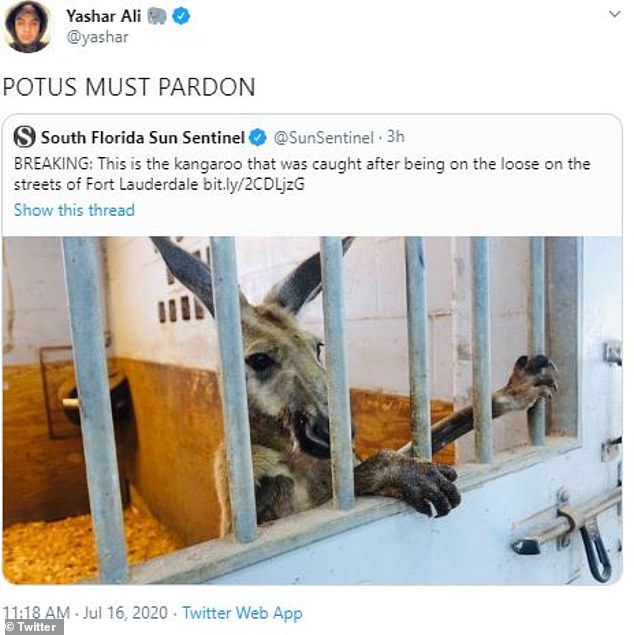 Cara Paiuk:’Convicted by a kangaroo court for jumping bail, he will now buy his way out with deep pockets’

Some people used this incident in Fort Lauderdale as ‘Peak 2020,’ in reference to the long list of unexpected things to happen this year

Naturally, social media was eager to crack jokes about the kangaroos day out in Florida.

‘POTUS MUST PARDON,’ wrote reporter Yashar Ali, sharing a photo of the kangaroo behind the holding cell bars.

Journalist Cara Paiuk responded to Yashir’s tweet, saying: ‘Convicted by a kangaroo court for jumping bail, he will now buy his way out with deep pockets.’

Some people described a kangaroo being let loose and captured in Florida as ‘peak 2020.’

The kangaroo appeared fine and no one was injured in the bizarre incident.