What a cheek! Times Square topless painted lady is charged with extortion after she and another scantily-clad woman ‘forced an autistic man to pose for photos before demanding he pay $100’

Police have arrested a topless painted lady who works in Times Square after she allegedly forced an autistic man to pose and pay for photos with her.

Emelia LaPorta, 26, was charged with grand larceny through extortion on Friday over the incident, which occurred on September 12.

According to police, LaPorta and another scantily-clad woman – who has not yet been caught – harassed the 30-year-old man as he walked through the bustling tourist district.

The Brooklyn native had just attended a program from people with autism when he was approached by the women who insisted he  stop for a snap.

Those who pose for pictures with the painted ladies – also known as desnudas – are usually obliged to pay for the service.

Emelia LaPorta, 26, was charged with grand larceny through extortion on Friday after allegedly forcing an autistic man to pose for photos with her before demanding her pay money for the privilege. She is pictured in 2015

The autistic man told the pair he didn’t have any cash, but they claimed that he would not be charged for a photograph.

However, after taking photos on his phone – in which he was flanked by the topless beauties – the devious duo demanded the man pay up.

They allegedly marched him to a nearby ATM, where they required him to withdraw $100, according to The New York Daily News. 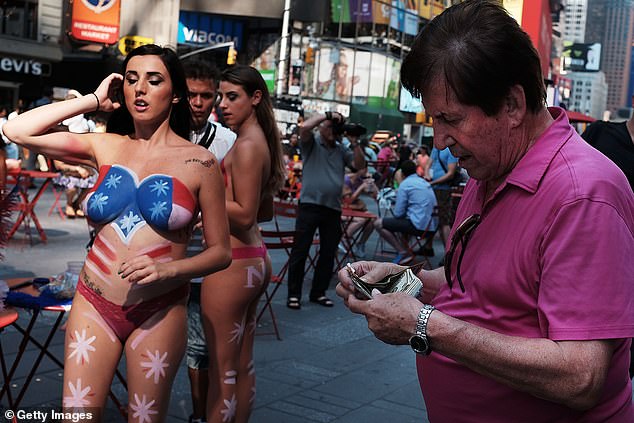 Those who snap a picture with the painted ladies – also known as desnudas – are usually obliged to pay for the service. LaPorta is pictured in 2015

The two topless women are alleged to have made $50 each in the scam.

Later, the man’s mother – who monitors her son’s bank account – noticed the $100 withdrawal and asked what happened to the money.

The man showed his mother the photos, and she promptly contacted police to report the incident.

LaPorta was subsequently arrested in Midtown Manhattan before she was taken into custody and charged.

She featured in a 2015 story on Spectrum News, defending her right to work topless in Times Square.

Investigators are still looking to track down the second woman involved in the scam. 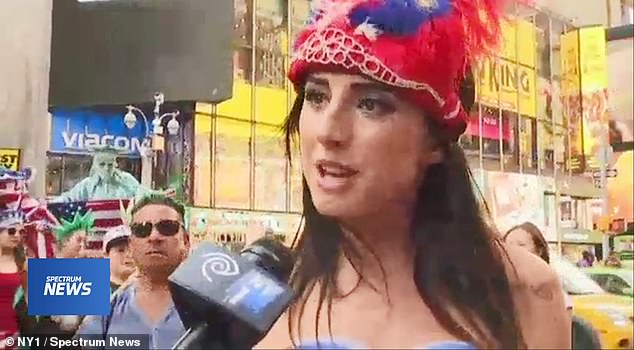 LaPorta featured in a 2015 story on Spectrum News, defending her right to work topless in Times Square