Cops drop heavy-handed tactics as they arrest protesters in NYC

Peaceful protests over the death of George Floyd and police brutality entered their eighth night in New York City despite threats of rain and the NYPD’s ‘no tolerance’ crackdown that saw more than 400 people arrested this week.

Thousands braved the wet weather and continued marching after 8pm on Friday following a day of demonstrations in Manhattan, Brooklyn, Queens, and cities across the country.

Police began moving in on crowds and carrying out arrests about an hour after curfew kicked in, but appeared to have dropped their heavy-handed tactics after videos emerged the previous night showing cops mistreating essential workers exempt from the order such as food delivery workers and journalists.

Mayor Bill de Blasio earlier said he had personally seen ‘no use of force around peaceful protests’ and cast doubt on people who had, belying social media posts and witness accounts of officers moving on demonstrators without provocation and bashing them with batons.

De Blasio made the comment in response to questions at his morning news briefing about teams of officers aggressively breaking up a rally in the Bronx on Thursday, leading to scores of arrests and cries of brutality.

The department did later announce the suspensions without pay for two officers, in connection to two separate incidents from the early days of protest. 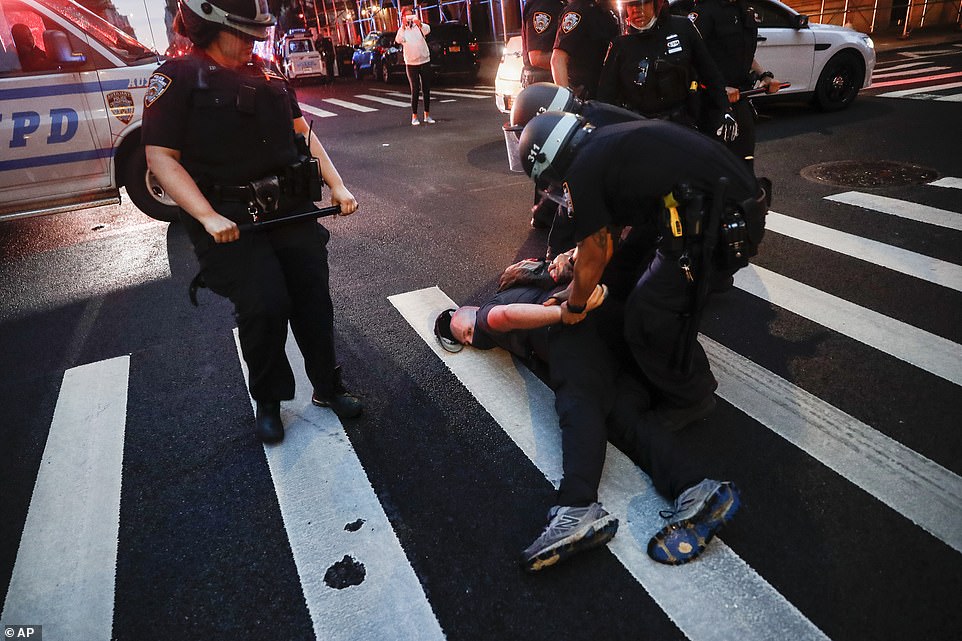 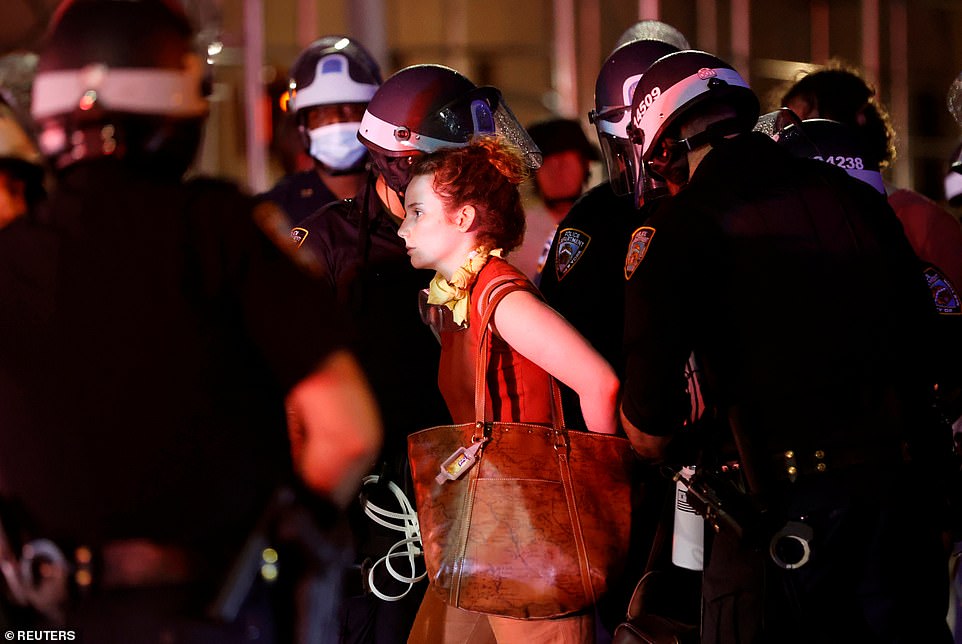 Police continued their crackdown on curfew violators on Friday, but appeared to drop their aggressive tactics 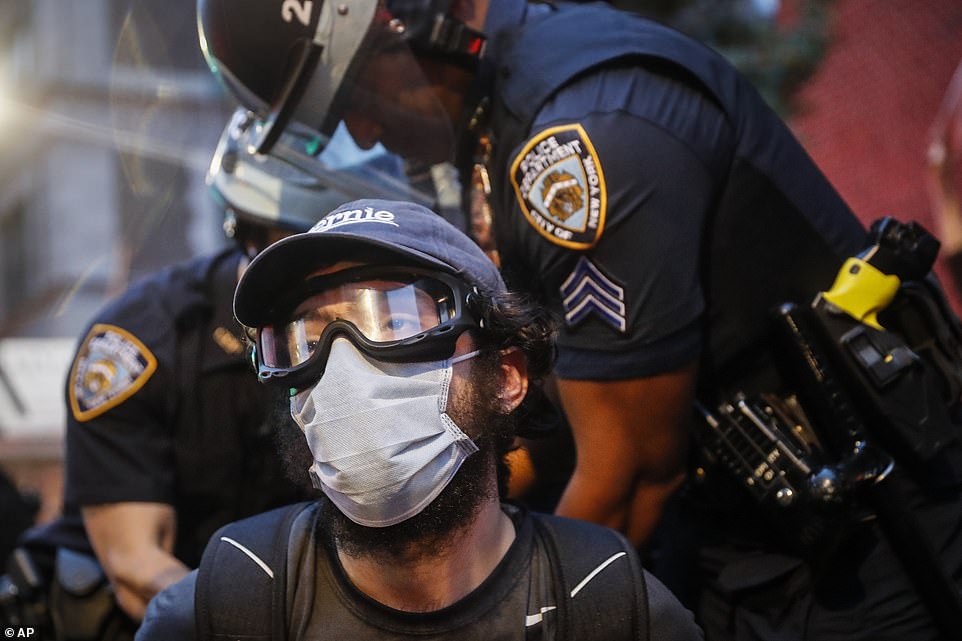 In one, on May 29, a video clip showed an officer shoving a woman to the ground.

In the second, on May 30, an officer was shown pulling a demonstrator’s mask down and spraying pepper spray. Both cases have been referred for disciplinary action.

Protesters marched through the city again Friday by the thousands. About three hundred people gathered in Union Square for a rally organized by medical professionals who have been battling the COVID-19 pandemic at its epicenter for the last three months.

One protester held a sign that read, ‘You Clapped For Us, We Kneel For You,’ referring to the ritual clapping New Yorkers do each night at 7 p.m. to salute health care workers.

Crowds also got together to sing happy birthday to Breonna Taylor, a black woman and EMT who was shot and killed by Louisville Police in March. A vigil was also held in Harlem, where 200 people gathered to mark her 27th birthday.

Earlier this afternoon, about 1,000 people marched down Flatbush Avenue and past Barclays Center in Brooklyn which has been the center of mass protests over the last week. 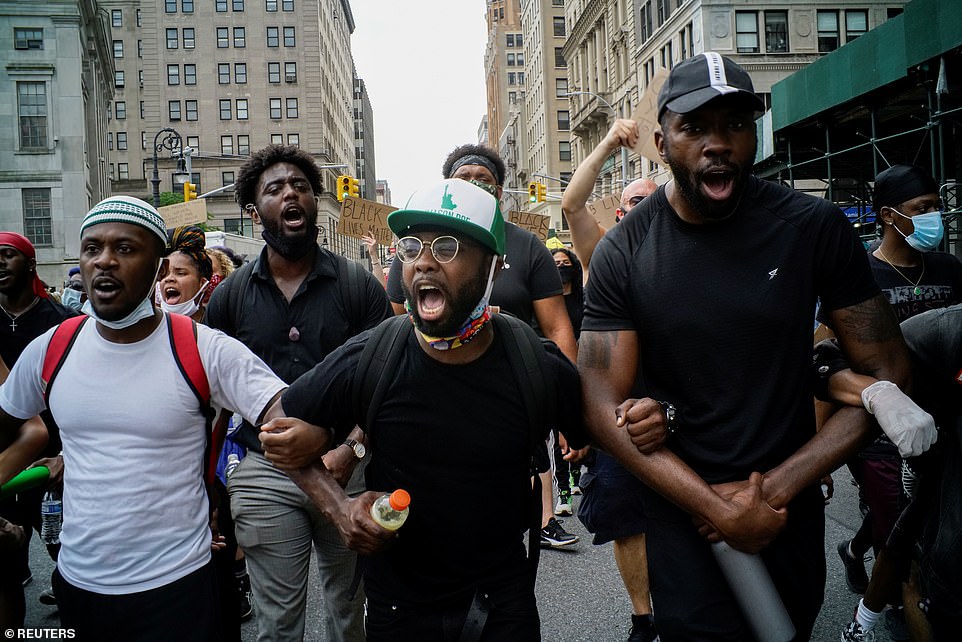 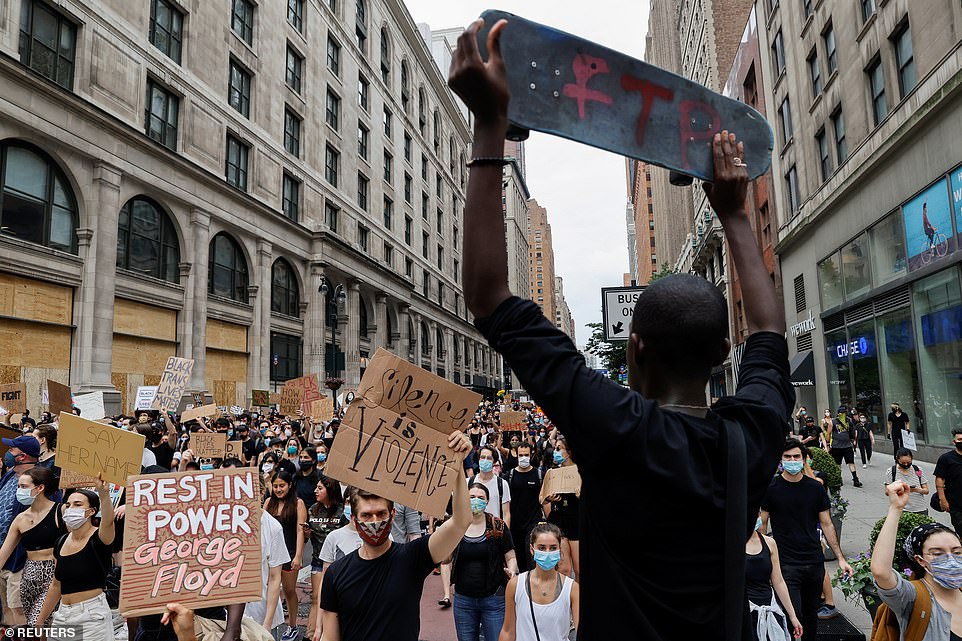 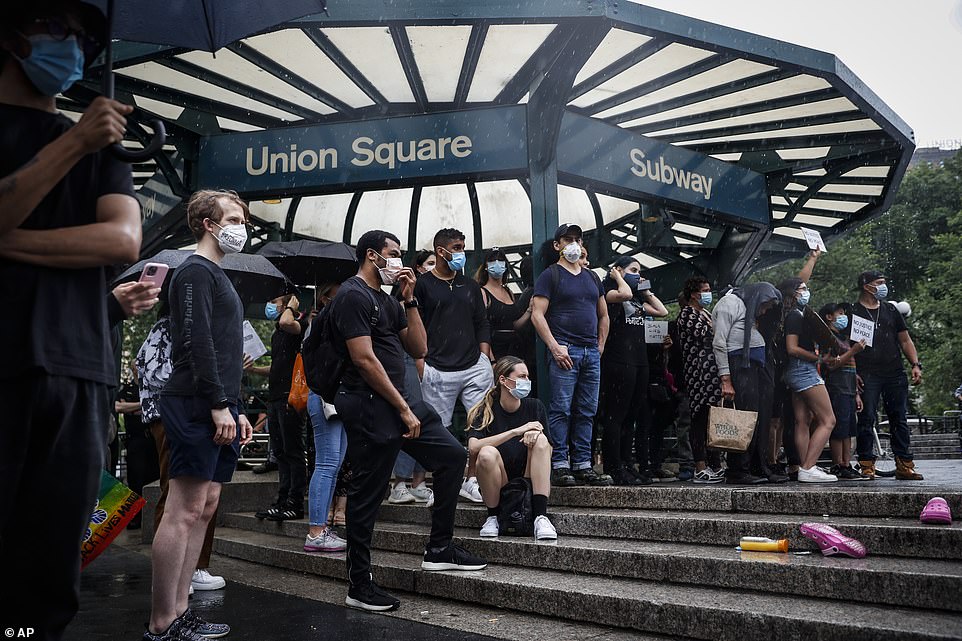 The mayor, however later downplayed their actions, saying officers were using ‘lots of restraint’ with protesters.

‘What an absolute disgrace. This is just not true,’ City Councilman Jimmy Van Bramer tweeted afterward. ‘You are gaslighting an entire City.’

Protesters marched through the city again Friday by the thousands, and once again, there were still demonstrators on the street as the curfew arrived.

The violent flareups that characterized some demonstrations last weekend have almost entirely given way to peaceful affairs. Looting that occurred on Sunday and Monday also appears to have ceased. 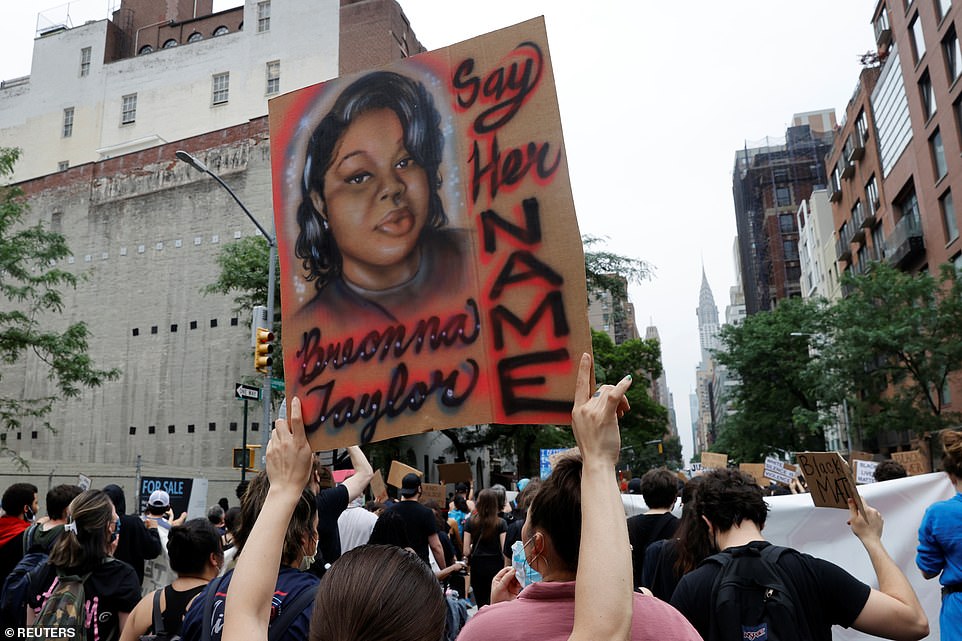 A woman holds up a placard of Breonna Taylor, who would have turned 27 today 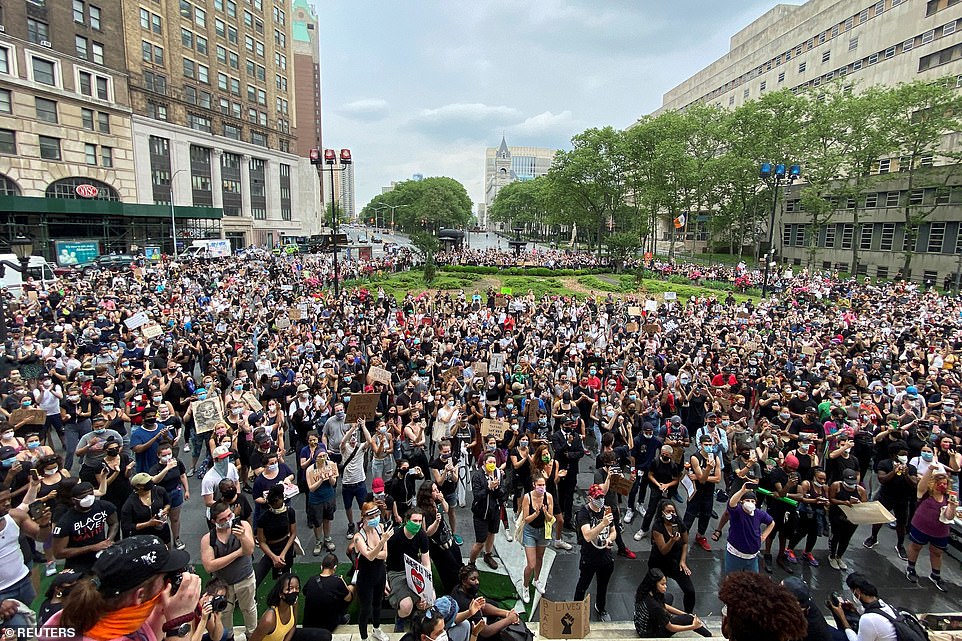 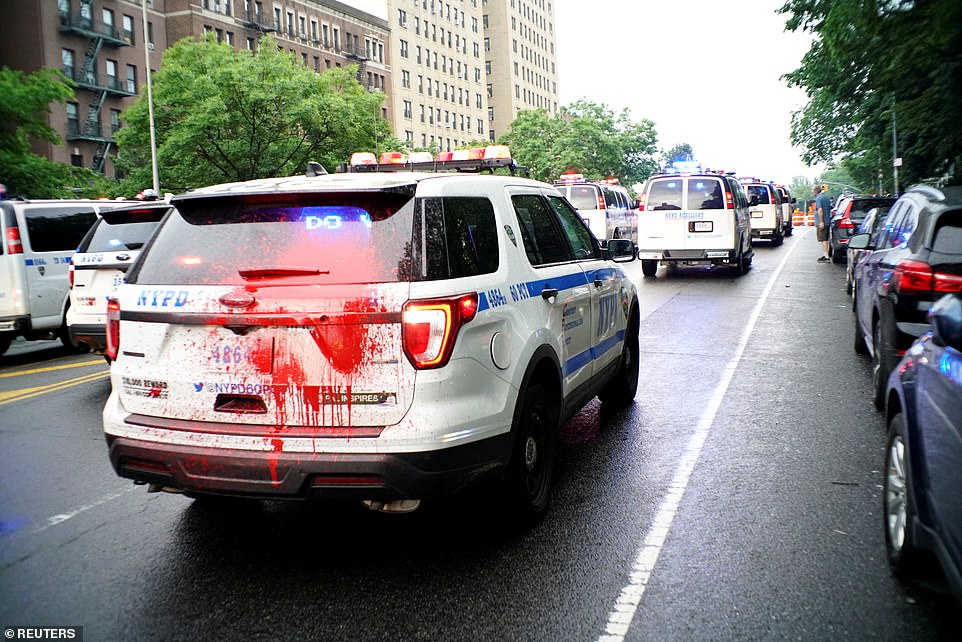 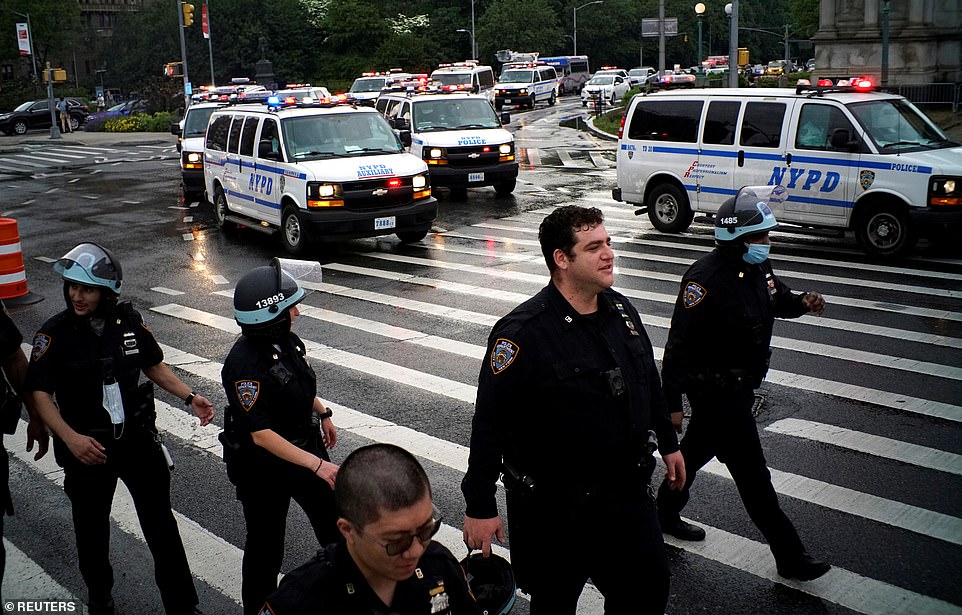 Donna Lieberman, executive director of the New York Civil Liberties Union, said by ‘willfully ignoring the evidence’ of bystanders, reporters, observers, and peaceful protesters being brutalized in plain sight, the mayor is emboldening the police to cause more harm.

‘I guess at this point the mayor is delusional,’ Public Advocate Jumaane Williams said.

Police Commissioner Dermot Shea said officers at the Bronx rally were acting on information that some in the crowd were plotting to destroy property and attack police, citing posters he said advertised the plan.

Shea said police recovered a gun, gasoline and other weapons at the event, adding that officers had done a ‘phenomenal job the last couple of nights.’

About 260 people were arrested, mostly for violating curfew.

Jake Offenhartz, a reporter for the news website Gothamist who was at the rally, challenged Shea’s account at Friday’s news briefing, saying what he saw firsthand ‘is nothing like what you´re describing.’

Videos posted on Twitter showed helmeted officers charging the vocal but non-violent crowd, pushing protesters back with bicycles and bloodying some with batons.

De Blasio was skeptical, saying unnamed observers from City Hall ‘saw a very different reality than what you saw.’

Shea, who gave a fiery speech Thursday denouncing a wave of vicious attacks on officers, said ‘sometimes when you’re in the middle of something, you don´t get to see the big picture too.’

On Friday evening, the department announced an arrest of two people in connection to a June 2 incident where a police officer was hit by an oncoming car, sending him flying into the street and leaving him in serious condition.

The police department’s treatment of peaceful protesters, amid smash-and-grab sprees and sporadic unrest, has come under fire as demonstrations stretch into a second weekend, spurred by George Floyd’s May 25 death in Minneapolis after a white police officer pressed a knee into Floyd´s neck.

After officers were recorded Wednesday shoving and hitting peaceful protesters as they enforced the curfew, it was Gov. Andrew Cuomo who doubted it happened, telling an Associated Press reporter that her question about the use of force was ‘a little offensive’ and ‘incendiary rhetoric.’