Cops hand out fines worth $305,000 to 56 adults who broke Melbourne’s lockdown at St Kilda party

Victoria Police have handed out $305,000 in fines to attendees of the illegal engagement party that triggered the state’s latest lockdown and saw an outpouring of vile anti-Semitic abuse.

Young Jewish couple Michal Franck and Yoni Rubin hosted the illegal celebration earlier this month in their St Kilda home with 69 family and friends turning up.

Authorities have since responded handing out 56 fines worth $5,452 to the partygoers, coming to a whopping total of $305,000.

‘Victoria Police has now issued 56 x $5,452 fines to people who attended the Caulfield North engagement party,’ the department said in a statement.

‘The remaining party guests were children and will not be fined. Victoria Police is satisfied all guests have been accounted for and the investigation has now concluded.’

Daily Mail Australia has learned the pair are now in hiding after being targeted in an anti-Semitic campaign since they were publicly exposed last week.

Michal Franck (left) and Yoni Rubin (right) sparked outrage after hosting an engagement party for 69 people inside a Melbourne home in direct breach of the city’s lockdown rules. Ten people who attended have since tested positive to Covid 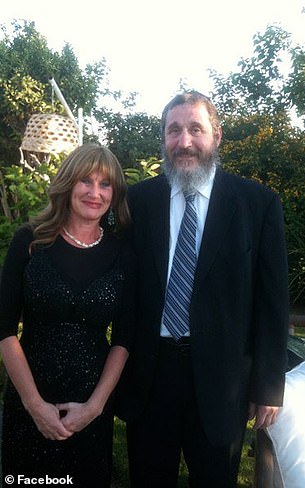 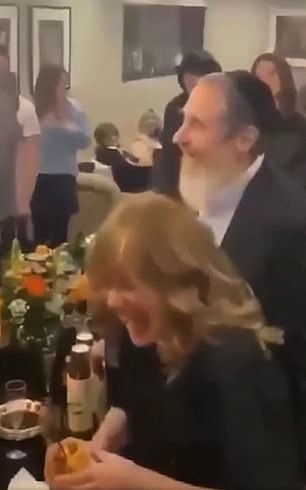 Social media has always been a hive anti-Senitism, but it has exploded in the past week

Victoria has recorded 50 new cases of coronavirus on Tuesday including an outbreak at a major hospital that forced dozens to isolate.

Mystery cases not yet linked to others in the outbreak halved from Monday to just 10 and 11 were infectious in the community.

The number of Covid-19 cases now linked to their engagement party grew to at least 10 over the past few days, with the story making international headlines.

Sixty-nine people had attended the illegal gathering on August 11 in St Kilda.

The children of a prominent psychologist and a cancer specialist doctor, Daily Mail Australia has been told the orthodox community has rallied behind the families in the days following their public outing.

A source within the tight-knit Jewish Orthodox community has revealed the much-loved couple has been forced to hire private security to protect them after receiving numerous death threats.

The party had initially been condemned by St Kilda Rabbi Ronnie Figdor, who said the couple ‘should have known better’ and his community was upset and disappointed.

Jewish leaders have since gone to ground as angry Australians turned their hatred on the entire community.

The video of the party, which was taken by a close friend of the couple, showed guests crammed into a small room as Yoni Rubin mocked the lockdown laws they were flouting.

Daily Mail Australia can reveal the video had been shared among friends in a WhatsApp messenger group.

Someone within that group shared the video and within hours it went viral.

The hate campaign swung into full gear days later when an unusually angry Victorian Premier Daniel Andrews during his Covid press conference on Monday slammed attendees for their ‘selfish choices’.

‘They are sh**ty choices and they keep us all locked down for longer than we should be,’ Mr Andrews said.

‘Every time even a small number of people make really bad choices, selfish choices, it take away from the hard work that so many millions more are doing, and it extends these lockdowns because it makes it more likely that we will have more cases.’ 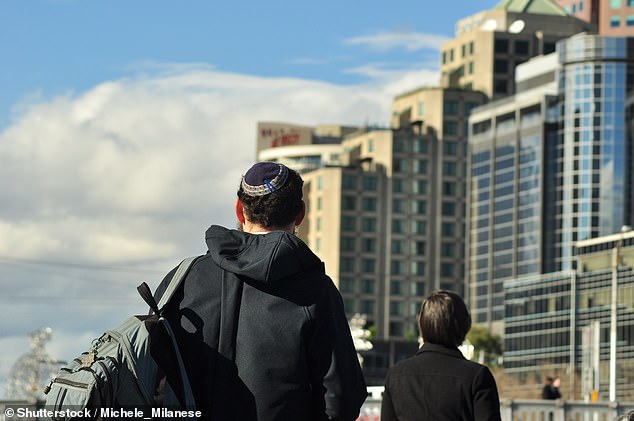 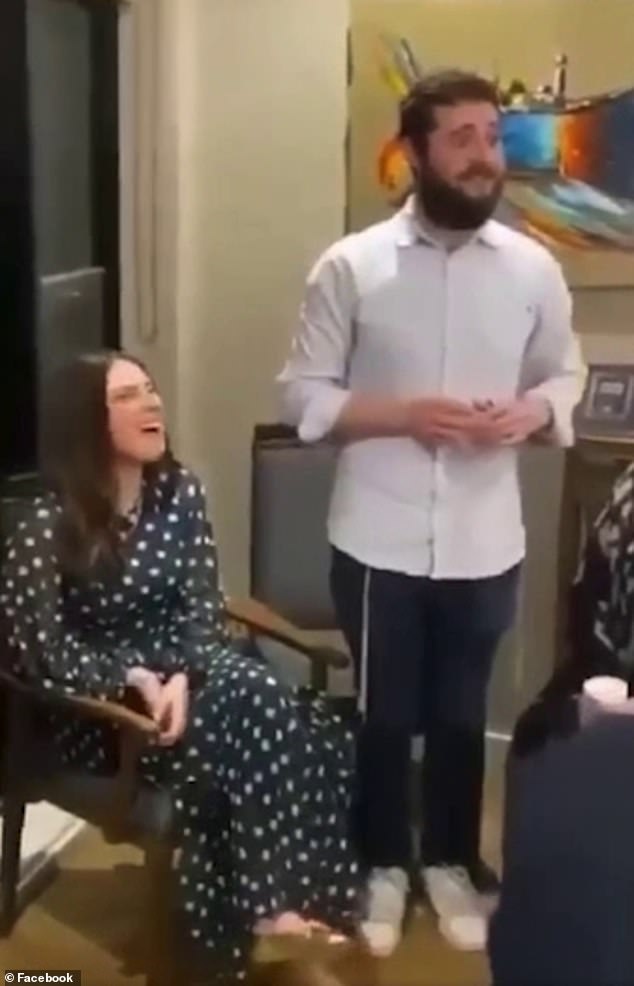 The groom-to-be mocked Victoria’s lockdown laws, saying: ‘Clearly this is legal because this is a group therapy session’. He then pointed out his father, who is a psychologist, as another reveller jeered ‘he’s a mental health clinician’

So furious was Mr Andrews, he turned-up at Monday’s press conference with Victoria Police Commissioner Shane Patton, who read Victorians the riot act in a display of solidarity with his political master.

Mr Andrews inadvertently fanned the flames of hate further when he deliberately made note that those who attended the party had all shared a religious affiliation.

‘This is not an act of faith. This is not part of any cultural practice. This is just bad behaviour,” he said.

Staff continued to refer to the ‘Jewish community cluster’ for days until Covid commander Jeroen Weimar took a bullet for the team and apologised.

‘I am hugely disappointed that my words have been interpreted as a slight or criticism of the Orthodox Jewish community – this was absolutely not intended,’ he said on Thursday.

‘I apologise to Melbourne’s Jewish community for the hurt and harm that my words have done.’ 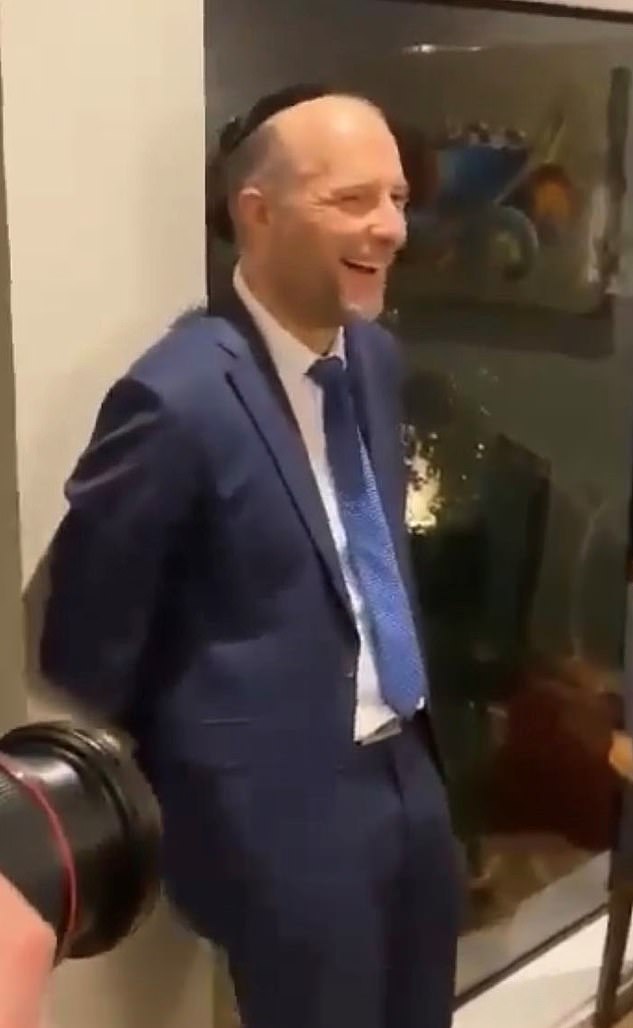 Michal’s father Dr Mark Franck (above), 52, is a skin cancer expert. He laughed as his future son-in-law made a joke about Victoria’s lockdown

CALL FOR CALM FROM JEWISH LEADERS

Chairman of the Anti-Defamation Commission, Dr Dvir Abramovich, has witnessed open slather against the Jewish community.

‘This erodes the unity our state needs now more than ever. We know that in times of crisis, those wishing to sow discord can drown out the voices of reason, and this singling out and disparaging of Jews is dangerous,’ he said.

‘I applaud the swift and decisive action by the RMH, sending the unmistakable message that antisemitism will never find a safe haven in their institution.

‘There is never any excuse or justification for this kind of disturbing and ugly rhetoric. I also welcome the strong and principled condemnation by Victorian Premier Daniel Andrews and Chief Health Officer Professor Brett Sutton of the tsunami of antisemitic expression and abuse directed at the Jewish community.’

‘Leaders need to lead, and I urge all elected representatives to call out this racist blame-game because if they don’t, there is risk that this kind of hateful rhetoric and harassment of the Jewish community will take on a life of its own and end in tragedy.’

‘This threat cannot go on unchecked, and we must make sure that a further escalation in antisemitism does not become a side effect of this virus.’

But the floodgates were already open.

The comment was made on a Facebook post where people were discussing how the party had the potential to create a superspreader event that could keep Melbourne locked down longer.

It had suggested the couple be ‘put in the gas chamber’.

Since then, things have gone from bad to worse for the couple and parents of the bride, who all copped a $5452 fine.

The Australian Health Practitioner Regulation Agency has launched its own investigation into the party, with the power to suspend the licenses of negligent medics.

‘We are aware that Victoria Police have stated that they intend to take action with respect to individuals who attended the event,’ an APHRA spokesperson said this week.

This week, the Victorian premier attempted to clean up the fallout from his scathing press conference.

‘Anti-Semitism is unacceptable and evil,’ he said. ‘We have a zero tolerance approach to that in our state.

‘There’s no sense that anyone needs to be harassing anybody and there is never, ever, a place in Victoria for anti-Semitic behaviour or language, it’s simply evil.

‘We called out some bad behaviour yesterday, we didn’t call out a community, because that would be simply unfair and wrong.’

Chairman of the Anti-Defamation Commission, Dr Dvir Abramovich, told Daily Mail Australia the entire Jewish community had been stunned by the level of anti-Semitism following the St Kilda incident. 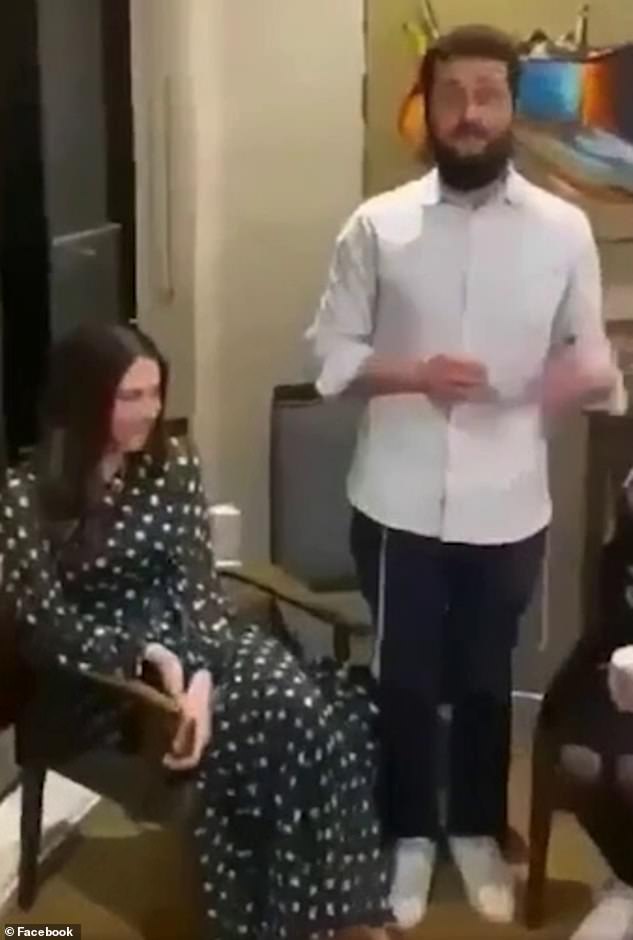 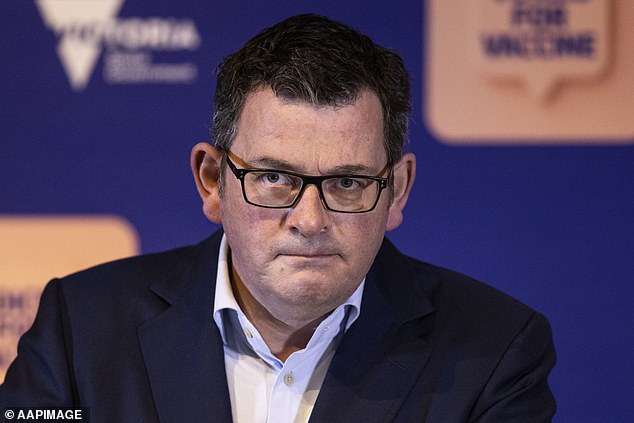 ‘The genie of antisemitism is out of the bottle. Words do not exist to describe the rage I feel right now. As this pandemic disrupts and takes a toll on our lives, we are seeing the outright scapegoating and the pointing of fingers at the Jewish community for this extended lockdown spiral out of control,’ he said.

‘A good shower would sort em out,’ one man posted – in reference to the gassing of Jews in false shower blocks during World War II.

Dr Abramovich said the degree of anger from some Australians had ‘rocked the Jewish community to its core’.

‘We know that anti-Semitism is at record highs in this country, but the volume and the viciousness and the cruel comments that have been posted, I think it has taken a lot of people by surprise. It’s quite chilling,’ he said.

‘Seizing on fear and existing anti-Semitic sentiments, this engagement party has become a vehicle for malicious stereotyping and generalising, demonisation and calls for violence which are frightening in their intensity.’