A new surveillance photo has helped more clearly identify the vehicle the Los Angeles Police Department says may have used to kidnap a woman earlier this month.

The LAPD said they also had received more than 30 tips about the incident, and that the department is now asking for the public’s help in finding the victim and a suspect who was driving the vehicle.

Ring surveillance video already had shown how the woman, making blood curdling screams for help, is driven off just after 11pm November 12 down a residential street in the city’s Leimert section. 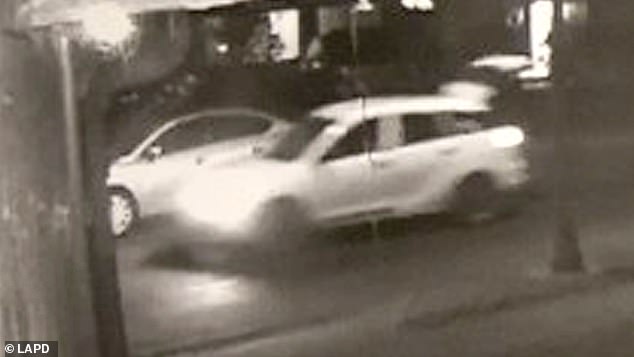 The new photo, released by the LAPD on Wednesday, shows the car (pictured) which originally was believed to be a Toyota Prius is more likely a Toyota Matrix, model years 2003 to 2008

The new photo, released by the LAPD on Wednesday, shows the car which originally was believed to be a Toyota Prius is more likely a Toyota Matrix, model years 2003 to 2008, the Los Angeles Times reports.

The vehicle was last seen near Greyburn Avenue and Obama Boulevard, and appeared to have its front passenger window covered in plastic after it was punched out, witnesses told cops, reports the Times.

At roughly the same time, police had responded to reports of a kidnapping in the 3800 block of Third Avenue. LAPD officers did not find any evidence of a crime, however.

The original video shows residents standing on their front porch as a car drives past their street.

A woman’s loud, piercing screams appear to come from the vehicle and she can be heard begging: ‘Somebody help me, please!’

The screaming continues for a full 30 seconds as the car drives out of sight.

The video is time-stamped as 11:11 p.m, just minutes after police had been alerted to a possible kidnapping in the neighborhood.

The owners of the doorbell footage can be seen looking on in confusion as the vehicle speeds past them.

A witness told KTLA that in addition to the woman’s screams, she could hear a man’s voice saying ‘I’m sorry’. 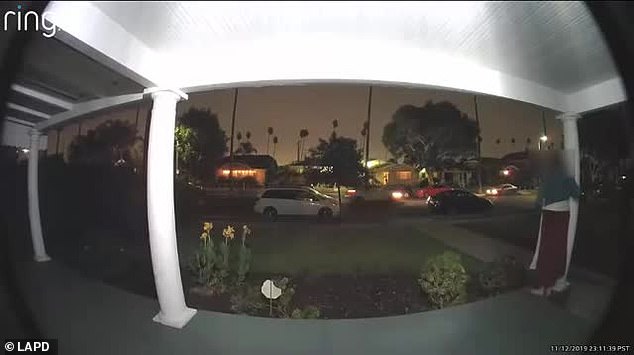 The LAPD said they also had received more than 30 tips about the incident, which was caught on Ring surveillance video footage (pictured) from a neighbor’s home

People online said the video had ‘sent chills down their spine’.

After being alerted to the footage on November 14, police reopened the investigation into a possible kidnapping.