New York authorities are seeking the public’s help in identifying a man who poured red paint on the Black Lives Matter mural in front of Trump Tower in Midtown Manhattan.

The NYPD released footage of the vandal pouring the red paint on Monday and shared that he is wanted for criminal mischief.

Video shows the mans at approximately 12.03pm pull the paint out of a bag as he approaches the mural on 725th 5th Avenue.

He can then be seen pouring the paint on various letters of the mural before headed off in an unknown direction.

The suspect appears to be a white man who could be in his mid-20s or early-30s.

Police described the vandal as being medium build and said that he was last seen wearing a black t-shirt, black shorts, black sneakers and black sunglasses. 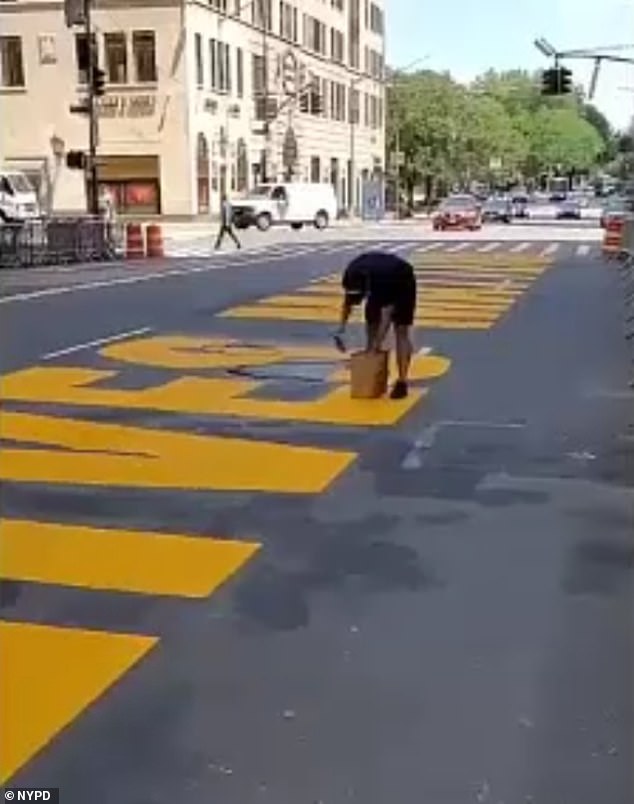 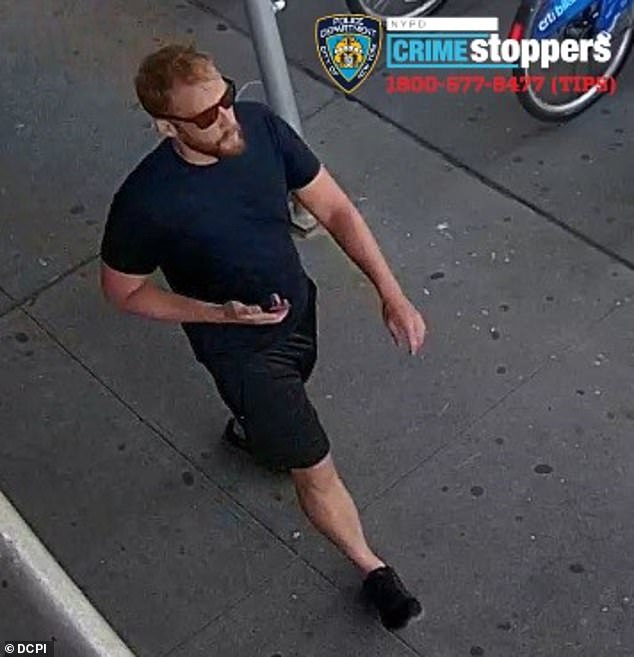 Police described the vandal as being medium build and said that he was last seen wearing a black t-shirt, black shorts, black sneakers and black sunglasses

De Blasio hit out at the person responsible on Monday night, tweeting: ‘To whoever vandalized our mural on 5th Avenue: nice try @NYCDOT has already fixed it.’ 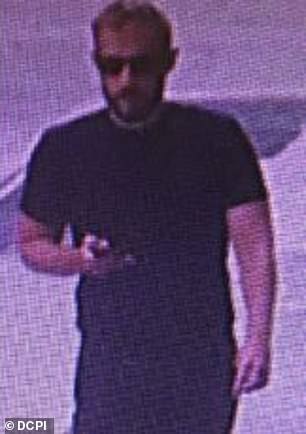 The unidentified man fled the scene after throwing the paint

Trump Tower has been the site of dozens of protests since Donald Trump was elected – including one on Saturday where anti-racism protests clashed with the president’s supporters at the new mural.

One of the witnesses to Monday’s defacement was a man wearing and selling ‘Dump Trump’ gear on the street.

He was pictured standing nearby a man holding up a sign seemingly intended to gaslight people highlighting racial inequalities. It read: ‘The only time black lives matter is when they are shot by a white policeman or an Oreo cookie. Defend all policemen.’

An ‘Oreo’ is a derogatory term used against people of color, comparing them to the cookie which is classically brown on the outside and white on the inside. The slur suggests the person exhibits behavior that the person judging aligns with being characteristically white.

The Black Lives Matter mural outside Trump Tower was one of five that de Blasio promised to paint across New York City last month as part of an initiative to honor civil rights activists. 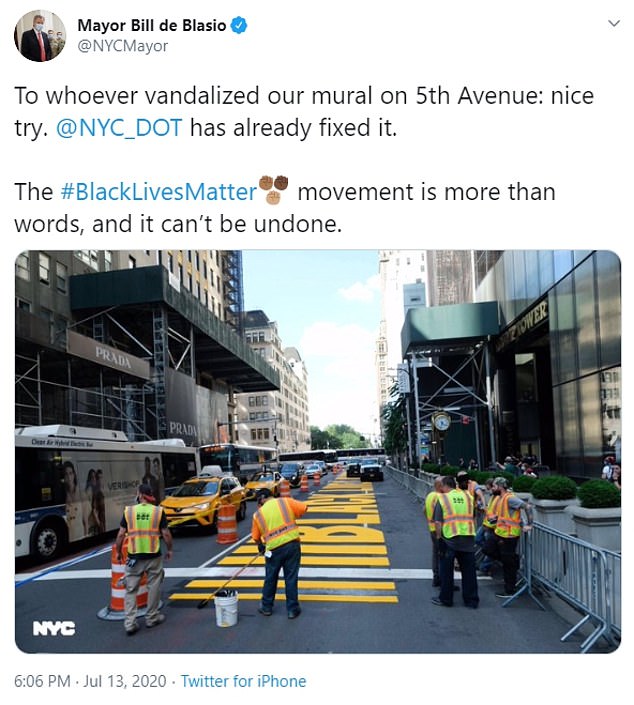 Mayor Bill de Blasio, who joined the community effort to paint the mural in large yellow letters last Thursday, hit out at the person responsible for the defacement in a tweet 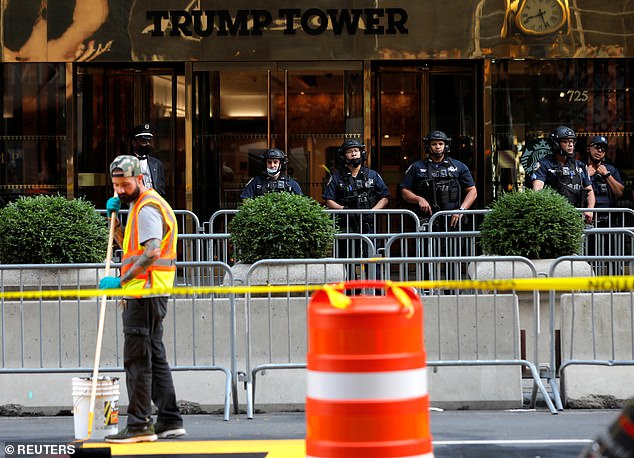 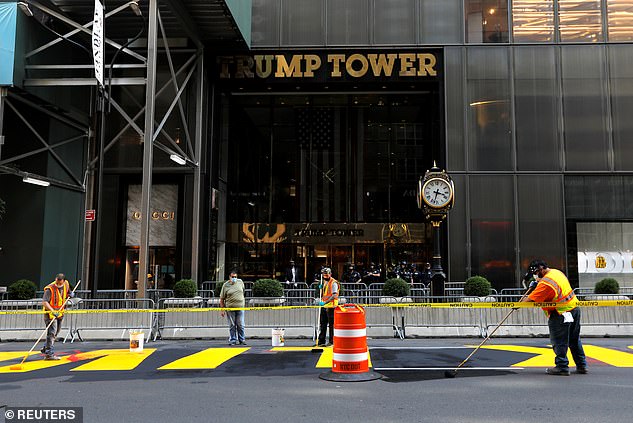 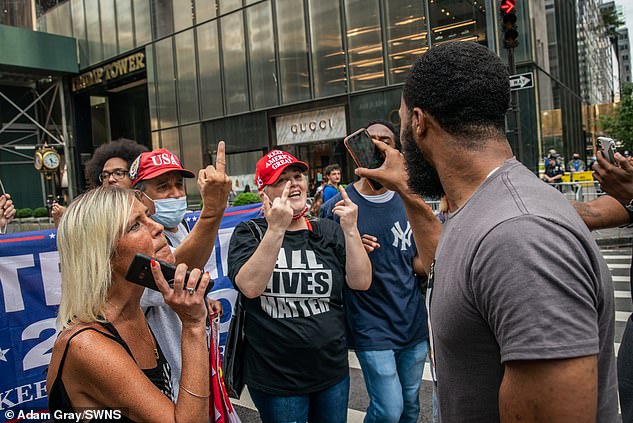 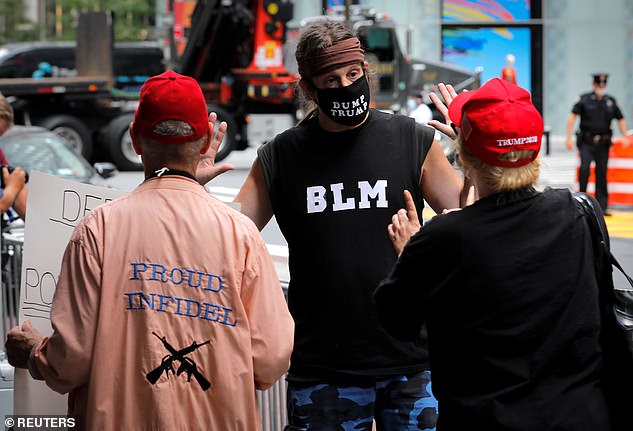 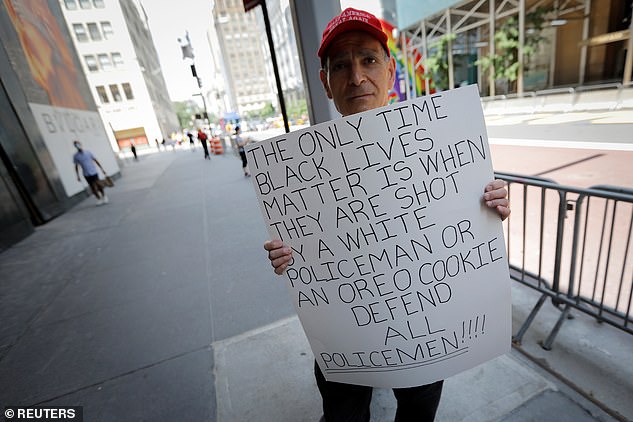 ‘We are acknowledging the truth of ourselves as Americans by saying “Black Lives Matter”. We are righting a wrong.’

Trump expressed his opposition to the mural earlier this month, saying it would denigrate the luxury shopping area. He also said it would ‘further antagonize New York’s finest’.

‘Maybe our GREAT Police, who have been neutralized and scorned by a mayor who hates & disrespects them, won’t let this symbol of hate be affixed to New York’s greatest street,’ Trump tweeted on July 1.

But police appeared to ignore the president’s remarks and were seen protecting the people painting the mural from counter-protesters on Thursday. 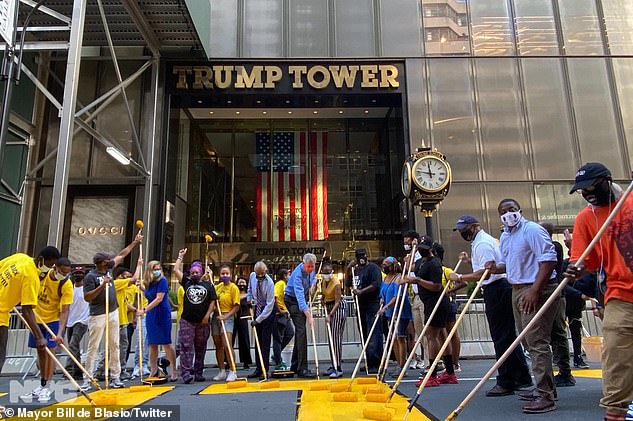 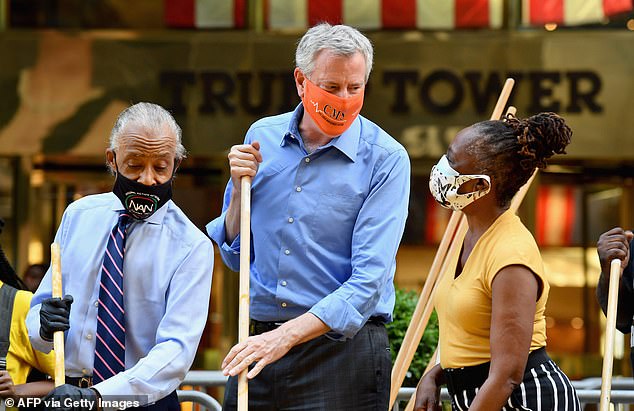 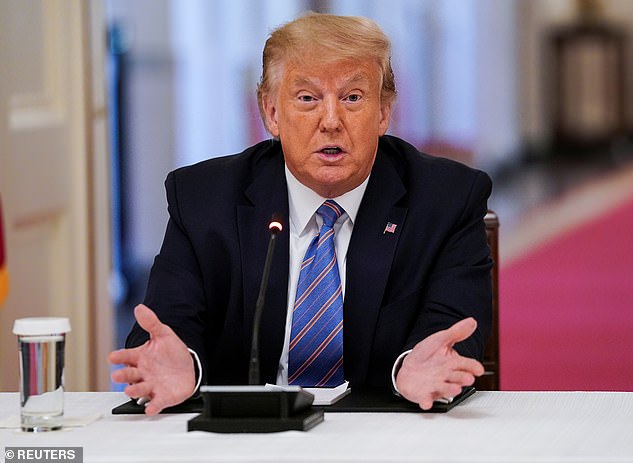 President Donald Trump expressed his opposition to the mural outside his building earlier this month, saying it would ‘further antagonize New York’s finest’

Black Lives Matter murals in other cities have been similarly defaced in recent weeks, including in Chicago, Milwaukee and Washington, DC.

Last week a couple in Martinez, California, were charged with a hate crime after they destroyed a mural there.

‘We must address the root and byproduct of systemic racism in our country. The Black Lives Matter movement is an important civil rights cause that deserves all of our attention,’ Contra Costa District Attorney Diana Becton said in a statement announcing the charges against David Nelson and Nicole Anderson.

‘The mural completed last weekend was a peaceful and powerful way to communicate the importance of Black lives in Contra Costa County and the country. We must continue to elevate discussions and actually listen to one another in an effort to heal our community and country.’

The decision to paint the murals came as Americans across the country expressed their hurt at statues and memorials to Confederate soldiers and slave-owners that have loomed over public places for decades.

Trump recently signed an executive order that would see anyone found to have tampered with a statue or monument face up to 10 years in prison.