Jeremy Corbyn will use billions of pounds of foreign aid to spread Left-wing and feminist ideals across the world, Labour said last night.

He would also abandon the Tory principle of spending the aid budget in the British national interest.

The Department for International Development has been criticised in the past for supporting certain projects intended to empower women.

This included spending £9million on Ethiopia’s version of the Spice Girls, Yegna, which the DfID has now stopped funding, admitting the money could be better spent elsewhere.

Mr Corbyn would oppose privatisation, push for a global wealth tax and ‘tackle the root causes of inequality’. Labour said taxpayers’ money would be spent on a new Social Justice Fund to support political activists in the developing world.

Funding for schemes involving fossil fuels would be scrapped to promote a climate change agenda. And DfID would be represented on the government body responsible for sanctioning arms sales.

Following abuses of power and sexual exploitation in the aid sector, Labour’s new aid plan – A World For The Many Not The Few – promised to transfer power away from the aid industry and into the hands of people and communities. ‘We must find ways to unite across borders in solidarity against elite control of our global economy,’ it says.

Regarding its support of women, the party said it would ensure all foreign and trade policy had ‘positive gender impacts’.

‘A Labour government will implement the UK’s first explicitly feminist international development policy,’ it said. The report pledged a ‘gender transformative approach’ across all of DfID’s work as well as ‘gender budgeting’.

It called for an international commission to explore the possibility of a global wealth tax, as proposed by Left-wing economist Thomas Piketty. 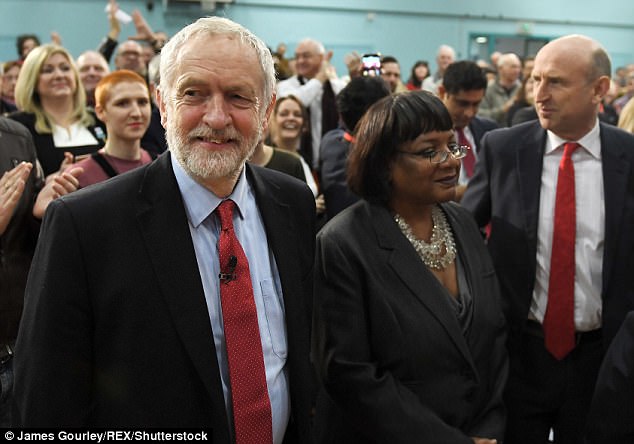 Jeremy Corbyn and Diane Abbot at the Labour local elections campaign launch in Stretford Sports Village, Manchester. Corbyn said he would oppose privatisation and push for a global wealth tax

Aid money would be channelled towards helping countries tackle tax avoidance, and low income countries would be given preferential trade access.

Labour would end British support for public-private partnerships overseas and privately-funded aid firms. There would be no more cash for fee-paying schools and private finance initiative healthcare schemes. The party accused the Conservatives of ‘simplistic charity’ rather than promoting social justice – and criticised Tories for ‘shifting the focus of the aid budget from poverty reduction alone to what it called the national interest’.

Aligning the DfID’s funding to the ‘short-term’ national interest would end and Labour would focus on the ‘moral purpose of poverty reduction’.

The report also claimed Britain should be happy to continue giving financial support to India, even though it is now rich enough to afford its own space programme, because aid cash can help tackle inequality.

Mr Corbyn said in the foreword to Labour’s report: ‘The Conservatives won’t challenge the rigged system that has created global crisis because they are at the heart of that system.

‘They reduce aid to a matter of charity, rather than one of power and social justice. Worse, they seem ever too ready to abandon our development commitments to the world’s poorest. We don’t have to accept the world that global elites are building for us. Let’s take on the root causes of poverty, inequality and climate change, and not just their symptoms.’

David Cameron enshrined in law the pledge that the UK spends 0.7 per cent of national income on foreign aid. British aid spending now far exceeds the average among other developed economies.