Labour would seek to complete Brexit if it won a snap general election in the new year, Jeremy Corbyn has said.

The opposition leader said he would ‘go back and negotiate and see what the timetable would be’ with Brussels if Theresa May triggered a vote and lost.

Mr Corbyn has resisted the growing calls from his party’s grassroots to back a second referendum on the Brexit deal.

His latest comments in an interview with the Guardian will further dismay the pro-Remain Labour MPs who have backed a ‘people’s vote’.

Labour would seek to complete Brexit if it won a snap general election in the new year, Jeremy Corbyn (pictured) has said, in comments likely to dismay his party’s pro-Remain wing

Mr Corbyn told the paper a Labour government would ‘go back to the EU with a discussion about a customs union’ if it came to power before March 29.

Asked about Labour’s position if there was a fresh popular vote, he said: ‘It would be a matter for the party to decide what the policy would be.’

‘My proposal at this moment is that we go forward, trying to get a customs union with the EU, in which we would be able to be proper trading partners.’

Mr Corbyn said it was in the ‘national interest’ for Parliament to decide on Mrs May’s Brexit deal after the vote in the Commons was cancelled last week.

He has described the withdrawal agreement as a ‘miserable failure of negotiation’ and vowed to vote against it in Parliament.

But he has so far stopped short of tabling a full-scale vote of no confidence which could trigger a general election. 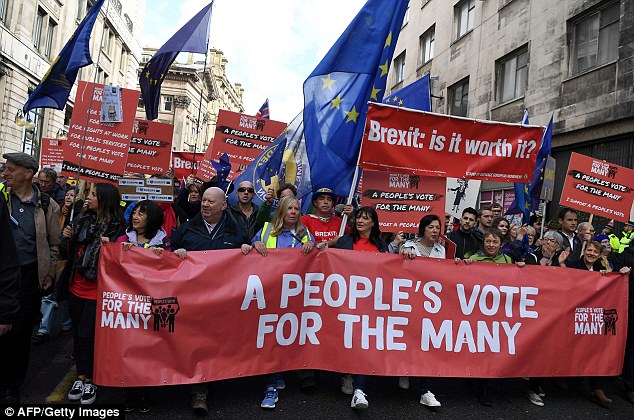 Mr Corbyn has faced pressure from Labour members, pictured here marching in Liverpool during the party conference in September, to back a second referendum on Brexit

This week he was embroiled in a Commons row after he was accused of referring to Mrs May as a ‘stupid woman’, which he denied.

In the interview Mr Corbyn also attacked the European Union over its tight rules on state aid and competition, suggesting it would stop a Labour government from ‘regenerating’ the economy.

The Labour leader has long faced pressure from pro-Europe MPs who regard him as a Eurosceptic.

During the 2016 referendum campaign he said his support for Britain’s EU membership was no more than ‘seven or seven and a half out of ten’.

In the aftermath of the Brexit vote he faced a leadership challenge from MPs who accused him of doing too little for the Remain campaign.