Zarah Sultana blasted ’40 years of Thatcherism’ in the UK as she addressed parliament for the first time – including 13 years when her party was in government between 1997 and 2010.

It is a Commons tradition that maiden speeches do not make party political attacks but the Corbynista 26-year-old told MPs she would not be stopped from lashing out at the Conservatives, accusing them of pitting communities against each other.

In a speech later praised by Labour deputy leadership front-runner Angela Rayner, as well as shadow ministers John McDonnell and Diane Abbott, she said: ‘Ten years ago I was sitting my GCSEs at school. I was a teenager and I never dreamed I would be here today.

‘In ten years’ time, at the start of the the next decade, I want to look teenagers in the eye and say with pride – my generation faced 40 years of Thatcherism and we ended it.’

Her remarks prompted mockery from former ministers and MPs who served under Mr Blair and Gordon Brown.

Several took to Twitter to highlight the New Labour government’s left-wing achievements, including massive funding increases for the NHS.

‘Her Sure Start programme and Tax Credits were also deeply unpopular. She also had record police levels and almost ended rough sleeping.’ 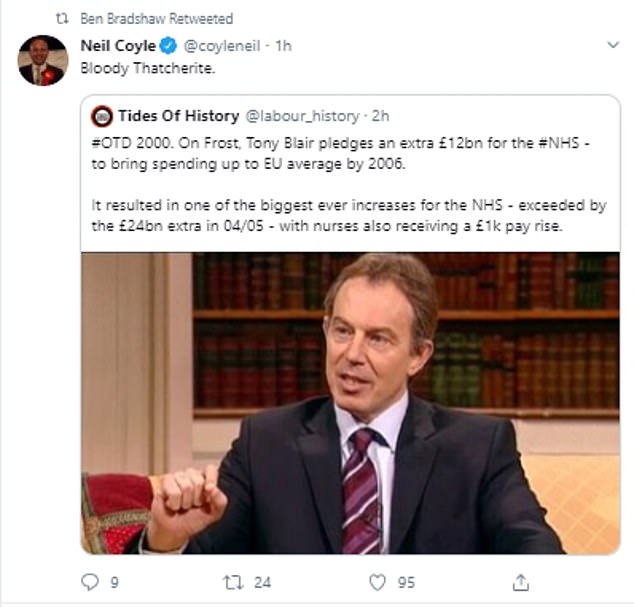 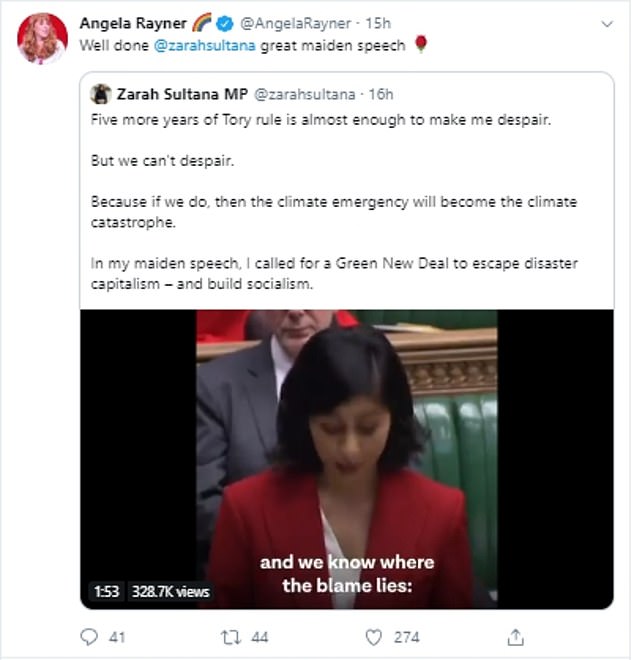 Angela Rayner, who is the runaway favourite to become Labour deputy leader, was among those who praised Ms Sultana’s speech. But MPs including former minister Ben Bradshaw and Bermondsey’s Neil Coyle hit back

It is not the first time Ms Sultana, whose family came to the UK from Kashmir, has attacked Mr Blair, who led her party to three election victories during her childhood.

Scottish Labour MP Ian Murray posed alongside his mum today as he kicked off his campaign to become the party’s new deputy leader.

The Edinburgh South MP embraced Lena Lavery as he unveiled his attempt to take the post despite trailing miles behind favorite Angela Rayner. 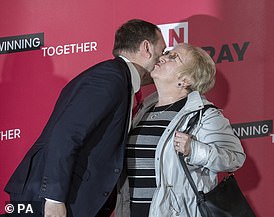 The 43-year-old, Labour’s only remaining MP in Scotland, came second in the ballot of party MPs behind the Ashton-under-Lyme MP.

But a poll of party members last night showed she would win convincingly after just one round of voting, with 60 per cent of ballots.

He kicked off his campaign at Wester Hailes Education Centre with a pledge to visit every corner of the UK to try to win back support for his party if he becomes deputy leader.

In November, before she was elected, she was forced to apologiuse for saying she would ‘celebrate’ the deaths of Mr Blair and Israeli leader Benjamin Netanyahu.

In one of the posts, Miss Sultana took issue with the suggestion that it was wrong to ‘celebrate the death of any person regardless of what they did’.

The former Birmingham University student wrote in 2015: ‘Try and stop me when the likes of Blair, Netanyahu and Bush die.’

She also wrote of her support for ‘violent resistance’ by Palestinians and used the hash tag ‘extremistmuslim’ online.

Flanked by hard Left Labour MPs including Leicester East’s Claudia Webbe and Brighton Kemptown’s Russell Lloyd-Moyle she also used her speech to warn of the widening class gap and take a potshot at Boris Johnson.

‘The gap between the ruling class and the working class has widened and is widening, and the response from members opposite, as it always has been, is to divide and rule,’ she said.

‘That’s what’s happening when they compare Muslim women to bank robbers, when they call gay men tank-topped bum boys, and when they blame events like the Hillsborough disaster on drunken fans.

‘They are pitting our communities against each other. They are diverting attention away from the billionaires that fund their party, dodge their party and rig the economy. 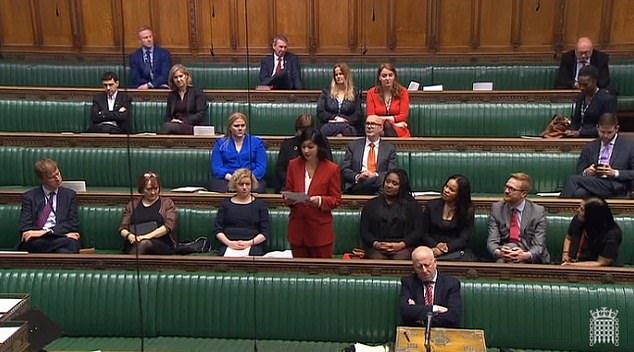 ‘Well, Mr Speaker, I’m a working class Muslim woman, and I know the Bullingdon boys will never be on my side, and they will never be on the side of the shop stewards in Coventry, the cleaners in Carlisle, the migrant workers in Manchester, teachers in Tottenham.

‘I know my Muslim brothers and sisters, my Jewish comrades, my friends in the gypsy, traveller and Roma communities, and people of all faiths and none, are safer when we unite to defeat the far right – even as this Government has given them new-found confidence.

Ian Lavery, the Labour chairman, and Jon Trickett, the shadow Cabinet Office minister, have joined forces to swipe that the party is ‘now disproportionately one that voted to Remain’ and is ‘drawn from the South’.

They also bemoaned the fact that much of the party’s membership now comes from ‘metropolitan areas and from the middle classes’.

Their comments are likely to be seen as a direct attack on Sir Keir Starmer’s leadership bid with some on the left of the party deeply sceptical about the Holborn and St Pancras MP and former director of public prosecution’s Labour credentials.

Their intervention came after a bombshell poll showed Sir Keir – the bookmakers’ favourite in the race to replace Mr Corbyn – is trailing behind Rebecca Long-Bailey.

A Survation survey of party members for the LabourList website showed Ms Long-Bailey would win 42 per cent of first preference votes while Sir Keir would win 37 per cent. 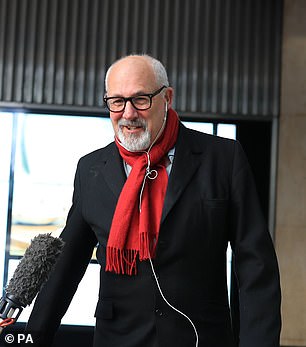 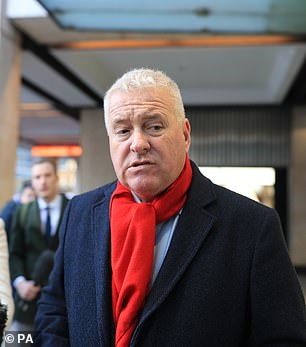 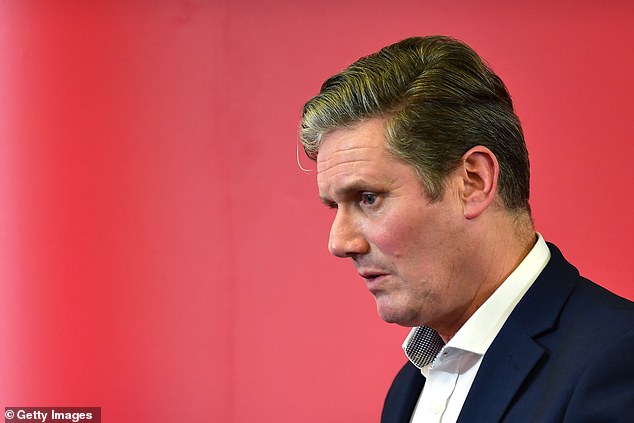 Mr Trickett’s and Mr Lavery’s comments are likely to be seen as an attack on Sir Keir Starmer’s leadership bid. Some in the party are sceptical of the former director of public prosecution’s Labour credentials

The numbers suggested Ms Long-Bailey – the candidate backed by the current Labour leadership – would then win the top job in the second round after second preference votes have been counted with 51 per cent of the vote to Sir Keir’s 49 per cent.

The numbers indicate that the battle to be named Labour leader on April 4 is on a knife-edge between the two frontrunners.

Meanwhile the remaining three candidates – Jess Phillips, Lisa Nandy and Emily Thornberry – all appear to be facing an uphill struggle to emerge victorious.

Ms Long-Bailey is viewed as the so-called ‘continuity Corbyn’ candidate in the race while Sir Keir is seen as a more moderate figure.

Ms Long-Bailey, the shadow business secretary, is the choice of leading figures such as John McDonnell and Diane Abbott.

But she has had a slow start to her campaign while Sir Keir has won the support of Britain’s largest union, Unison.

Non-Labour members have until 5pm today to become a £25 registered supporter of the Labour Party in order to secure a vote in the contest.

Mr Lavery and Mr Trickett used a joint column for The Mirror today to urge working class voters to sign up and help to ‘rebalance’ the party.

They said voters have a ‘generational chance’ to influence the direction of British politics as they said Labour needed to rebuild a ‘coalition of working and middle class’ in order to win elections.

‘However our membership is now disproportionately one that voted to Remain and drawn from the South, mainly from metropolitan areas and from the middle classes.

‘To win again, the coalition of working and middle class people within our own party must be rebalanced.

‘We want Labour supporters from working class backgrounds and from the North to become members of the party by January 20 and have their say in the leadership election.’ 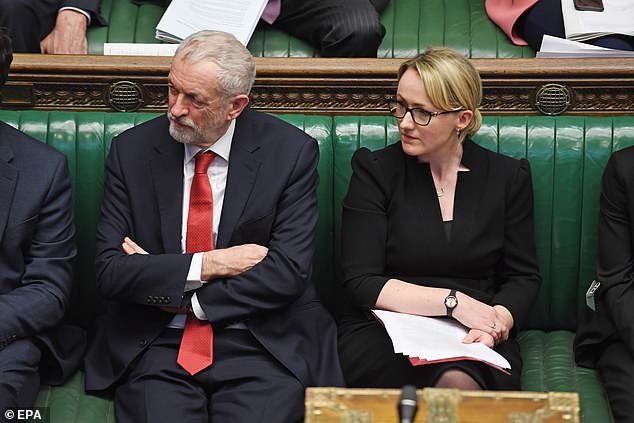 Rebecca Long-Bailey, pictured alongside Jeremy Corbyn in the Commons yesterday, has the backing of the current leadership in the race for the top job

The five candidates who are still in the race after securing sufficient support from Labour MPs must now win trade union or constituency endorsements to make it on to the final ballot paper.

Party members will then vote between February 21 to April 2 with the winner then announced on April 4.

The Survation survey also shone a light on the deputy leadership battle with Angela Rayner far ahead with 60 per cent – enough to avoid a second round of vote counting.