Corey Lewandowski on Tuesday stonewalled Democrats who were questioning him about possible obstruction of justice charges against Donald Trump as the president praised his former campaign manager’s tough stance.

Lewandowski took a combative and aggressive stance from the start of his testimony before the House Judiciary Committee, claiming the president was a victim of ‘haters’ and resisted Democrats’ efforts to ask him about his conversations with Trump.

The hearing is part of the Democrats’ strategy to prove there is enough evidence to impeach President Trump and they’ve issued a round of subpoena to witnesses from special counsel Robert Mueller’s report.

‘Don’t ask me a question I won’t answer,’ he told her when she pressed him on his conversations with the president.

‘This is House judiciary – not a house party,’ she shot back.

And when Jackson Lee pressed him to answer a question about a section of special counsel Robert Mueller’s report, which was projected on a screen in the hearing room, Lewandowski snapped back: ‘ You’re welcome to read it, congresswoman.’

‘You’re welcome to be stalling, and I’m not going to stall. Either answer the question yes or no,’ Jackson Lee responded.

‘I don’t believe there was a question, congressman,’ Lewandowski responded. ‘Just a rant.’

White House Counsel Pat Cipollone warned the Judiciary panel in a letter that Lewandowski would not discuss conversations he had with President Trump about government matters.

Lewandowski has remained a close adviser to the president even though he has no formal role in the Trump White House. He is often seen in the White House and on Air Force One, acting as an informal adviser to Trump.

And he is the first impeachment witness to appear before the committee since Mueller testified in July.

He came out fighting in his opening statement.

‘As the special counsel determined, there was no conspiracy or collusion between the Trump campaign and any foreign government, either on my watch or going forward. Not surprisingly after the Mueller report was made public, interest in the Fake Russian collusion narrative has fallen apart,’ he said.

‘Sadly the country spent over three years and 40 million taxpayer dollars on these investigations. It is now clear the investigation was populated by many Trump haters who had their own agenda – to try and take down a duly elected president of the United States. As for actual ‘collusion’ or ‘conspiracy, there was none. What there has been however, is harassment of the president from the day he won the election,’ he added.

He later said the ‘the Russian collusion narrative’ is one of the ‘greatest crimes’ perpetrated upon the American people.

‘Such a beautiful Opening Statement by Corey Lewandowski! Thank you Corey!,’ he wrote. 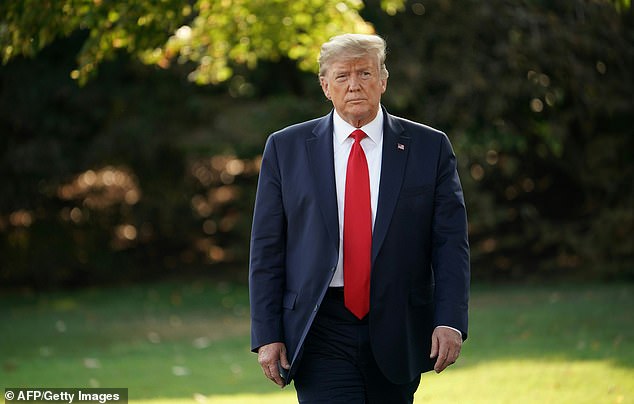 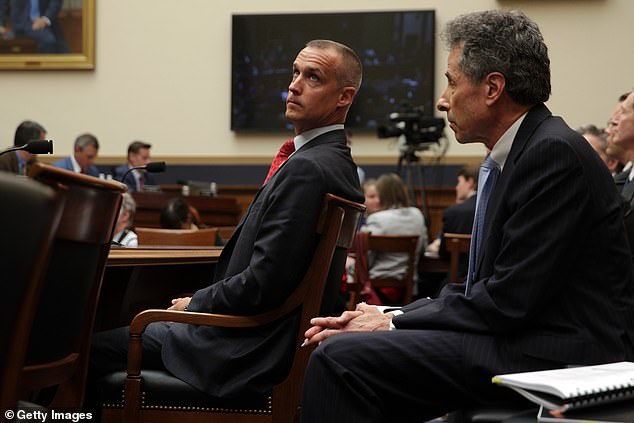 After his opening statement, Lewandowski began his stonewalling, telling Nadler he could not answer his questions about parts of Mueller’s report as he did not have the report in front of him. Committee staff provided him with a copy.

House Democrats wanted to ask Lewandowski about an effort by the president to get then-Attorney General Jeff Sessions to redirect the Mueller probe away from Trump’s 2016 campaign – a part of the Democrats’ investigation into whether the president obstructed justice.

The episode is outlined in Mueller’s 448-page report: In June 2017, Trump met with Lewandowski at the White House and gave him a message to pass along to Sessions – that the attorney general should shift the focus of the Russia probe to future elections.

Sessions had recused himself from overseeing Mueller’s investigation.

A month later, Trump asked about the matter and said Lewandowski should ‘tell Sessions he was fired’ if he would not meet with the former campaign manager, according to Mueller’s report.

Lewandowski asked then-White House aide Rick Dearborn to deliver the message instead but Dearborn, uncomfortable with it, did not do so, Mueller’s report noted. 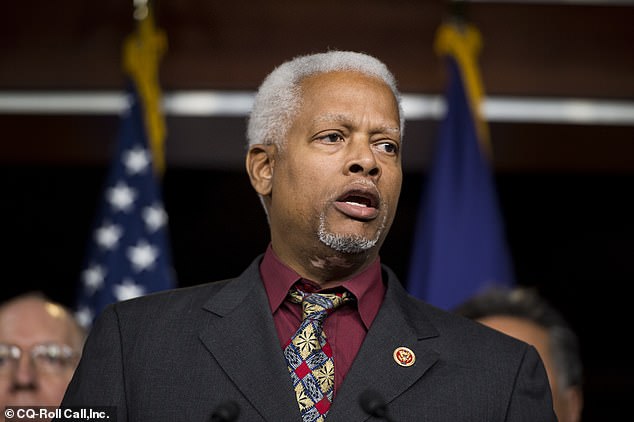 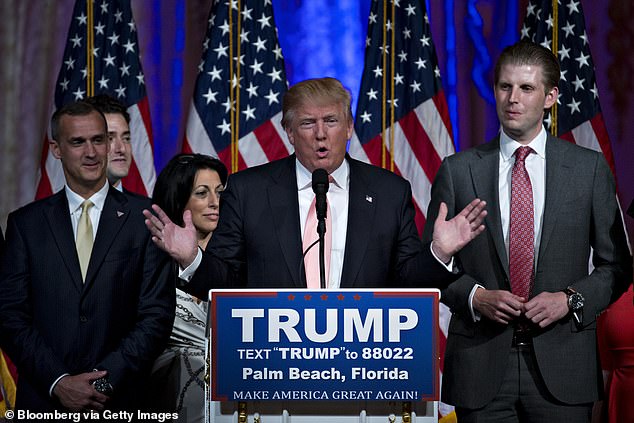 Democratic Representative Hank Johnson asked Lewandowski about that specific incident, saying to him: ‘You are about like a fish being cleaned with a spoon. It’s very hard to get an answer out of you.’

‘I believe he asked me to deliver a message for Jeff to consider delivering himself,’ Lewandowski said of Trump’s request for him regarding Sessions.

‘And it was a message that he intended for Jeff, meaning Jeff sessions, to deliver out loud and publicly. He wanted the public to know what he was saying but he wanted Jeff to say it. Correct?,’ Johnson asked.

‘I believe the Mueller report accurately depicts that,’ Lewandowski replied.

Johnson asked him about his decision to ask Dearborn to deliver the message instead: ‘And you felt kind of squeamish, like a, like that fish that you are trying to be right now, being scaled, you felt a little squeamish about delivering that message. Correct?’

‘You chickened out,’ Johnson said.

‘I went on vacation,’ Lewandowski replied. ‘I took my kids to the beach, congressman. More of a priority.’ 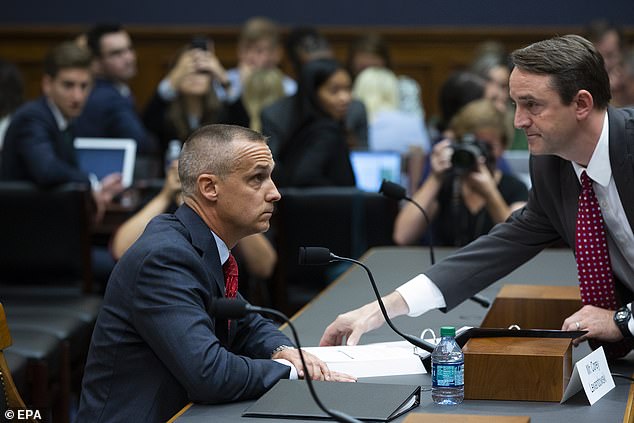 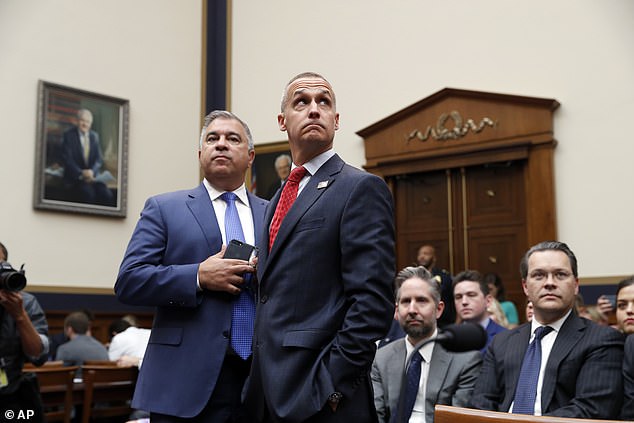 He also pushed back with Democratic Rep. David Cicilline also asked him about the incident

‘I can’t comment on a private conversation with the president, asserting executive privilege,’ Lewandowski said.

‘I can read you the exact statement if you’d like. The White House direct I not disclose any comments with the president,’ Lewandowski began.

Cicilline interrupted: ‘You’re not going to stonewall me in my questioning.’

‘Would you like me to answer your question,’ Lewandowski shot back.

At one point in the hearings Lewandowski said he’s never read the Mueller report.

‘I’ve never actually read the report,’ he said, adding ‘no one has.’

He even used some resistance tactics with Republicans.

‘We could’ve talked about your football team,’ Republican Congressman Doug Collins told him.

He also resisted efforts from Democratic Rep. Hakeem Jeffries to define what role or job he has with President Trump.

‘No. I don’t believe so,’ Lewandowski said.

‘Let me ask the question another way,’ Jeffries said. ‘Are you the hit man, the back man, lookout are all of the above?’

Ahead of Lewandowski’s testimony, Judiciary Chairman Jerry Nadler charged the president with obstructing their investigation.

Nadler, in a letter to White House counsel Pat Cipollone, blasted the president’s decision to forbid former White House aides Rick Dearborn and Rob Porter from testifying Tuesday and to limit Lewandowski’s ability to talk about conversations he had with Trump after he became president.

‘Having avoided a charging decision from the special counsel’s office due to the Department’s policy precluding indictment of a sitting president, President Trump now appears to be using the powers of his office to obstruct all investigations by the only branch of the federal government currently capable of holding him accountable,’ Nadler wrote to Cipollone. 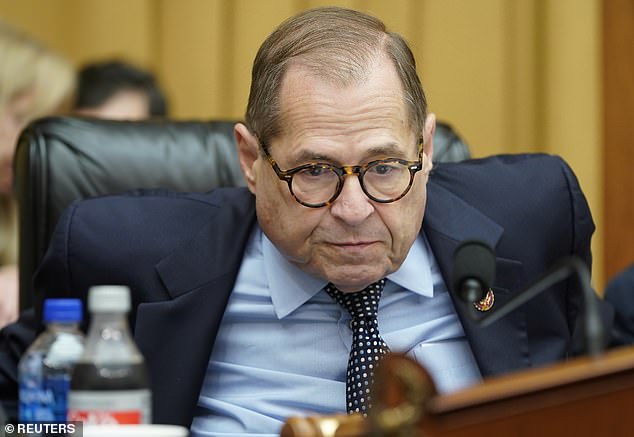 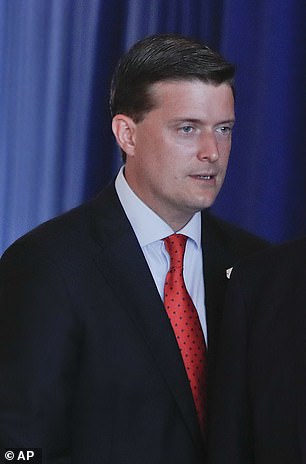 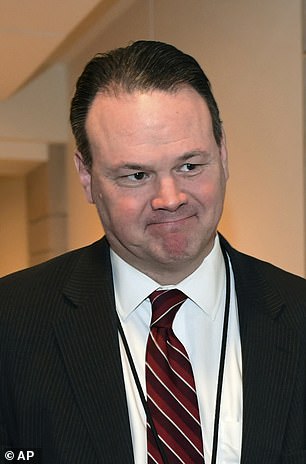 Cipollone told the committee in a letter Monday night that Lewandowski – who is mulling a New Hampshire Senate bid – would not to discuss conversations he had with Trump about government matters unless those subjects were already mentioned in Mueller’s report.

‘The White House has directed Mr. Lewandowski not to discuss the substance of any conversations he had with the President or senior Presidential advisers about official government matters, unless the information is expressly contained in the Report,’ Cipollone wrote.

‘Mr. Lewandowski’s conversations with the President and with senior advisers to the President are protected from disclosure by long-settled principles protecting Executive Branch confidentiality interests,’ Cipollone argued.

Additionally, Cipollone, in a separate letter, ordered former Porter and Dearborn not to testify, arguing they are ‘absolutely immune’ from congressional testimony.

The White House already forbid former White House counsel Don McGahn from testifying before Nadler’s committee. McGahn defied his subpoena and the matter is now before the federal courts.

Nadler blasted the Cipollone in his opening statement.

‘Mr. Lewandowski, you are here under subpoena. That means you are required to answer our questions, all our questions, completely and truthfully,’ he said. 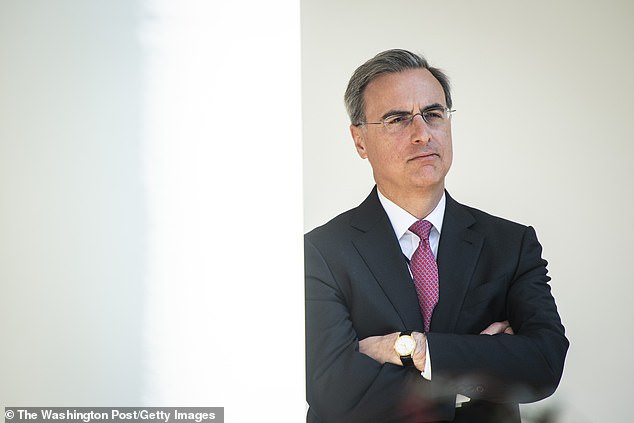 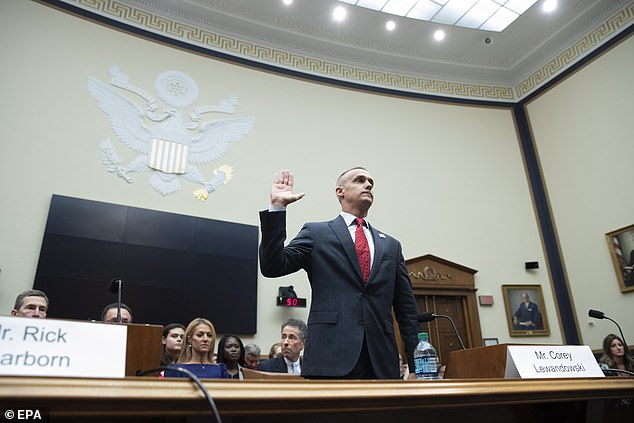 Corey Lewandowski came out fighting in his opening statement

The New York Democrat also questioned if Dearborn – who served as Deputy Chief of Staff for Legislative Affairs in Trump’s White House – had a high enough ranking in the administration to fall under executive privilege.

‘I question how Mr. Dearborn fits under those rules. According to DoJ opinions, actual immunity applies to, quote, the president’s immediate advisers who serve as the president’s alter ego, closed quote. To extend this already dubious adoption to Mr. Dearborn is a dangerous stretch. I think we should call this what it is, an absolute cover-up by the White House. Mr. Lewandowski is here and has vital information about presidential obstruction of justice. The White House wants to limit our and your ability to hear it all,’ he said.

‘The White House is advancing a new and dangerous theory, the cronie privilege. It makes absolute immunity look good by comparison. Where are the limits? This is a cover-up, plain and simple. If it were to prevail, especially while the Judiciary committee is considering entering articles of impeachment, it would end a separation of powers as envisioned by our founders,’ Nadler added.

Lewandowski has remained close to Trump even after he left the job of campaign manager during the 2016 election.

Trump has indicated he would support Lewandowski should he run for New Hampshire’s Senate seat next year.