Thirsty work! Reece the corgi leaps up and down to drink from water sprinkler in adorable game

A determined little dog takes his self-appointed job very seriously as he tries different tactics, speeds and distances to get hold of water sprayed from a sprinkler.

Charming footage shows Reece jumping from side-to-side trying to grab the water on a sunny day in his garden in Panama City, Florida.

Reece braves the force of the water when he stands as close to the sprinkler as he can for as long as he can in his garden in Panama City, Florida

The corgi tries barking at the water and running at it from a further distance but nothing works.

Eventually he braves a new tactic and determinedly stands directly in the way of the water as he repeatedly closes his mouth over it.

Frustrated he jumps and tries to grab the water a bit further away from the sprinkler itself.

He continues to bark and bite at it until his fur is dripping wet.

At one point he runs as far out as he can to end of the garden to see if he can grab hold of the water from there.

The video ends with him resorting to his original method of running side-to-side and biting at the water. 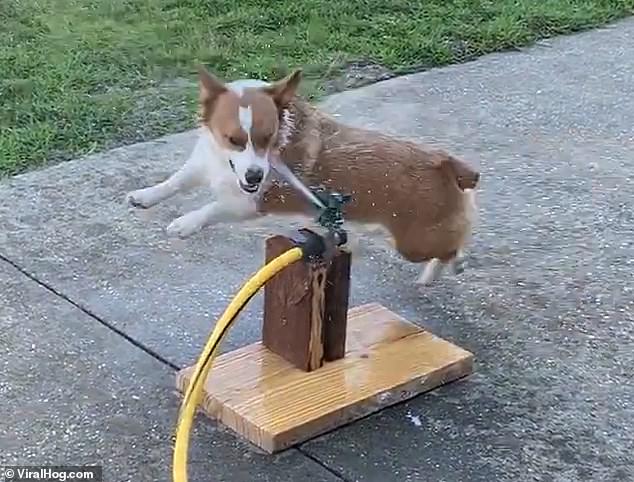