A dog owner has captured the moment his corgi tried to play with his own reflection in a mirror in a heart-warming video.

Eric Smith, a literary agent in Ann Arbor, Michigan, shared the video of his pet dog Augustus playing with a toy bone on Twitter where it quickly went viral.

In the video the playful pooch, nicknamed Auggie, can be seen approaching his own reflection, which he has mistaken for a second corgi, and attempting to interact with it.

Auggie scratches the bone when his reflection doesn’t respond to him, in an attempt to start playing.

He can be heard whining and stares at his mirror-image, becoming increasingly frustrated that it won’t play with him.

In the end the pup picks up the toy and lies down in a huff, finally giving up on his game.

Eric Smith, a literary agent in Ann Arbor, Michigan, shared a seriously cute video of his pet corgi Augustus, nicknamed Auggie, trying to play with his reflection in the mirror 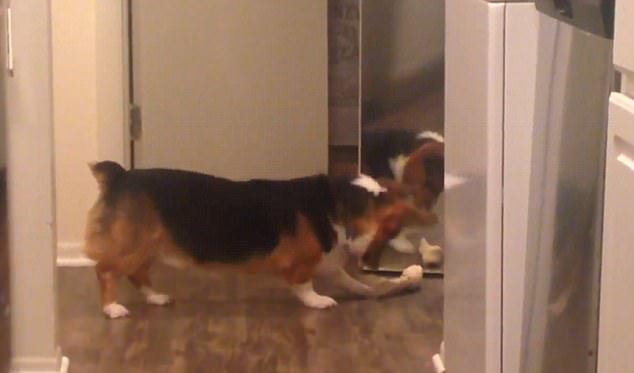 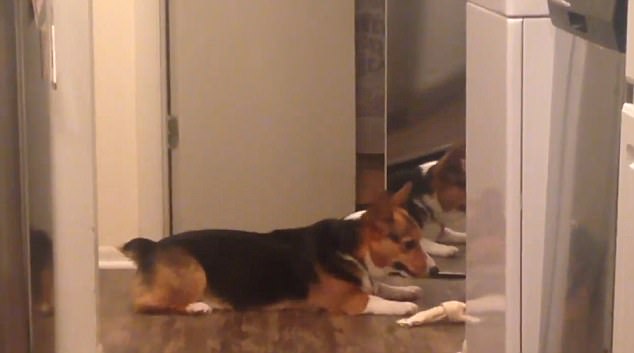 In the end the pooch got fed up and lied down next to the bone looking grumpy, still not realising it wasn’t another dog

Smith shared the video on Twitter to prove to his followers how ‘pure’ the dog breed is.

He said: ‘I don’t think any of you understand just how pure corgis are. He keeps trying to share that bone with his reflection in our closet mirrors.’

Smith’s tweet in which he shared the clip has since gone viral and racked up 66,000 retweets and 166,000 likes on Twitter.

Another posted: ‘What a wonderful weirdo.’

Twitter users found the clip adorable, with one person saying it was the ‘most pure’ thing they’d ever seen

‘Wish people took a page from that pup’s playbook,’ a third said.

‘His face at the end,’ another wrote, followed by a string of crying face emojis.

After the tweet went viral Auggie was noticed by celebrities, including actor George Takei, which delighted Smith.

Smith posted: ‘Oh @GeorgeTakei watched the video of @agentauggie. I have peaked on the Internet. I can retire from it. Farewell.’