The owner of a café favoured by famous faces – including former prime minister David Cameron – is facing closure because of its cheeky name.

Roadside café ‘Nice Baps’ which sits in a layby in Cornwall, is under threat of closure and owner Kevin Baker, 54, blamed people taking offence to its name.

Mr Baker who was once homeless and living in a van opened the business, made to look like a log cabin, with his wife Laura, 34, ten years ago after converting an old shipping container. 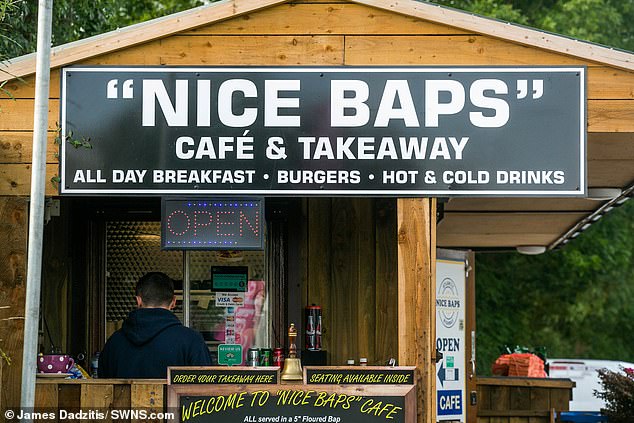 The couple have made such a success of the project that it became the highest rated of all 2,218 places to eat in Cornwall and has been subject to three takeover bids by Costa Coffee.

The feedback left by customers has even pulled in a few celebrity fans, including former Prime Minister David Cameron, ex-Eastenders actor Joe Absolom and the cast of Poldark.

But the future of the business in the A39 outside Wadebridge is now in jeopardy.

Kevin said they are facing issues to get his street trading licence renewed once again and face a hearing of Cornwall Council on December 12.

He said: ‘It has broken us.

‘Two councillors have put in an objection to the renewal of our street trading license and are trying to have Nice Baps Cafe closed down yet again because of its name and because they say we have made it bigger.

‘It is no bigger than we have been for all the years we have been here. They have revoked our license and put us in front of a panel to ascertain whether they are going to give us our license. 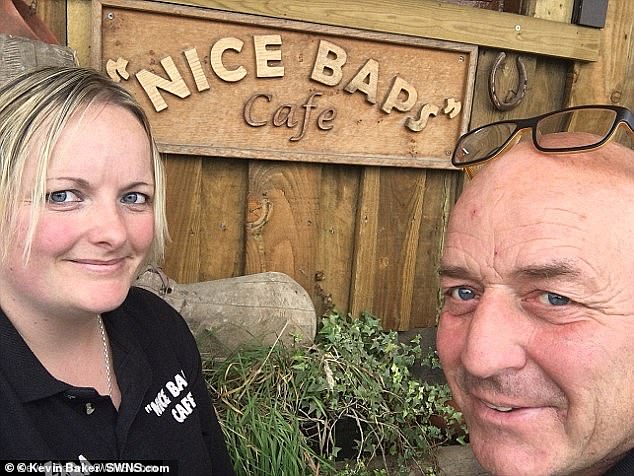 The father-of-two, who use to be homeless and lived in a van, said they haven’t changed the size of the business but that they’ve simply ‘smartened it up’

‘How on earth can they possibly say it’s the name when there are three other businesses in the country with the same name?

‘The English dictionary depicts the name ‘baps’ as a bun.

‘And you can’t make a shipping container any bigger than it is – we have smartened it up a bit to make it look like a cafeteria but we haven’t changed the size.

‘I’ve got a three-year-old son at home and a ten-year-old daughter – we don’t need this.’

The cafe was almost forced to close two years ago after the Highways Agency raised an objection to their trading licence, but locals launched as campaign to save the café.

An emotional Kevin added: ‘After all the work that Laura and I have done for the local community and raising over £15,361 towards helping house Cornwall’s homeless and being a hub for all walks of life to come and visit it’s tearing us apart knowing that a council committee on the December 12 could possibly close us down.’ 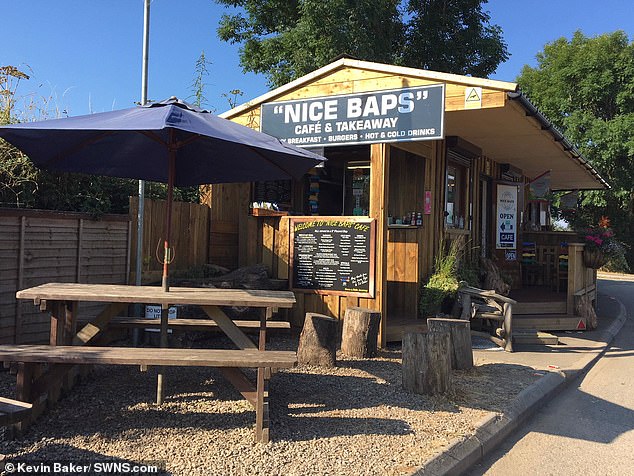 The cafe, which looks like a log cabin, has helped to raise over £15,361 towards helping house Cornwall’s homeless during the last ten years

Laura said: ‘If we had breached one of the conditions of our license why have we not had a letter to say can you do something to change it?

‘Anything they have ever asked us – we have done it at the drop of the hat. We do everything to go by the book and the rules.

‘It is heartbreaking. We are only little fish in a big ocean. I don’t know why they are against us.’

John Pomeroy, the clerk to Egloshayle Parish Council denied Kevin’s claims that the objections were down to the name of the business but rather concerns over breaches of the diner’s licensing agreement.