A mother of two embroiled in a battle with her council after she racked up £800 in parking fines claims she was told to leave her baby home alone before finding a space if she wanted to avoid future charges.

Emma Hawkins was handed 11 tickets after she chose to ignore new parking restrictions outside her home.

To avoid the fines she said she would have to park at the other side of the village of Polruan, in Cornwall, and walk a long way with shopping, pushchair, and her children, four-month-old Charlie and three-year-old Oliver.

Warden nightmare: Emma Hawkins (pictured with baby Charlie and three-year-old Oliver) said when she appealed her tickets, Cornwall Council told her to drop her children at home before finding a space in their home, Polruan village

Mrs Hawkins, an accounts clerk, has unsuccessfully challenged her fines and claims Cornwall Council told her to dump her newborn baby and three-year-old child at home before going to find a space.

The 32-year-old said: ‘They suggested that I should deliver my children to our house and then leave them to find a place that I could legally park in. That would mean leaving them by themselves for 10 to 15 minutes.’

A Cornwall Council spokesman said people are advised how to avoid fines during their appeal process, but that it was ‘never suggested’ Mrs Hawkins should leave her children unsupervised.

Mrs Hawkins, who lives with her husband Ross, a boatyard manager, says the parking problem is caused by the number of tourists and second homeowners who flock to the picturesque riverside village.

She said: ‘The local council decided to have parking restrictions put up all over the village. Literally overnight we found that the place that we have been permanently using to park our car for the last three years was also affected.

‘It’s also affected other home owners who have been using the area for nearly 30 years.

Mrs Hawkins’s house is at the other side of Polruan to the car park, making it ‘inconvenient’ and ‘unpractical’ for her to park there with her children.

She said she is now embroiled in a battle with Cornwall Council over the fines because, she claims, there was ‘no alternative’ given when the council brought in the new restrictions. 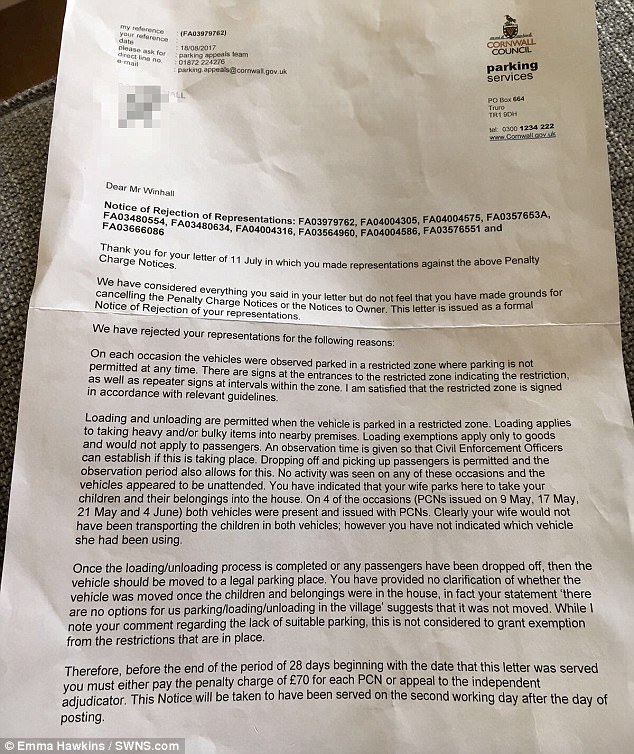 Cornwall Council said people are advised how to avoid fines during their appeal process, but that its letter (pictured) ‘never suggested’ Mrs Hawkins should leave her children unsupervised

But part of the letter from Cornwall Council rejecting Mrs Hawkins’ appeal read: ‘While I note your comment regarding the lack of suitable parking, this is not considered to grant exemption from the restrictions that are in place.’

Mrs Hawkins said: ‘Polruan is becoming a slowly diminishing village that is now largely made up of second home owners, which is understandable considering how difficult the local council seem to make it to lead a modern day life here.

‘We battled the chairman of our local council, who was completely unsympathetic, and now upon appealing these fines with Cornwall Council, had our appeal rejected upon the grounds that loading and unloading children was not an acceptable reason to leave the car in a restricted zone.’

Mrs Hawkins claimed that there are areas in the village which are part of the restricted parking zone that don’t appear to be patrolled by parking enforcement.

She added: ‘The council have shown no compassion for our case, bearing in mind when this started I had a two-week-old baby and was still recovering from giving birth so my mobility was rather limited.

‘I feel that parking enforcement and the local council pick and choose their rules depending on who you are in the village and if your face fits. As a family we’d like to fight for the survival of local residents in the lower half of the village and like our voices to be heard.’

A Cornwall Council spokesman said: ‘The Civil Enforcement Officer must issue a Penalty Charge Notice (PCN) to any vehicle that is parked in contravention of the waiting restrictions in place.

‘As part of the appeals process, we advise drivers on what is and isn’t allowed and that could include advice to drop off passengers and move the vehicle to a legal parking place.

‘It is never suggested that if those passengers are children that they should be dropped off and left alone.’