A man was left trapped under rubble after a suspected gas explosion destroyed a bungalow in a Cornish village.

Residents were ‘blown from their beds’ when the explosion ripped off the side of the home in Carnkie, in Cornwall, at around 1.00am.

A second blast minutes later spread debris up to 200 metres away.

The trapped man, named locally as Mike Coddington, 71, was rescued from under the rubble and taken to hospital. His condition is not yet known.

One witness said exploding gas cylinders were behind the ‘earthquake-like’ blast. 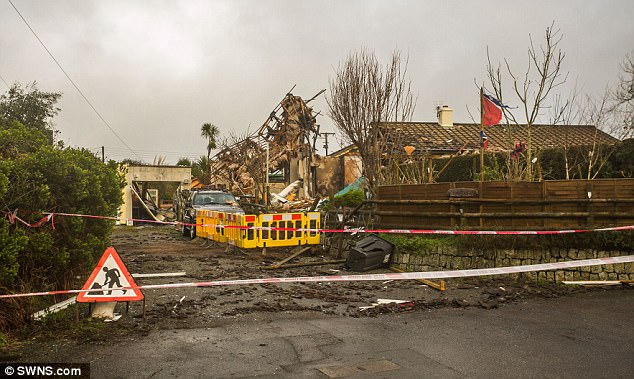 A man was left trapped under rubble after a suspected gas explosion destroyed a home in a Carnkie village, in Cornwall 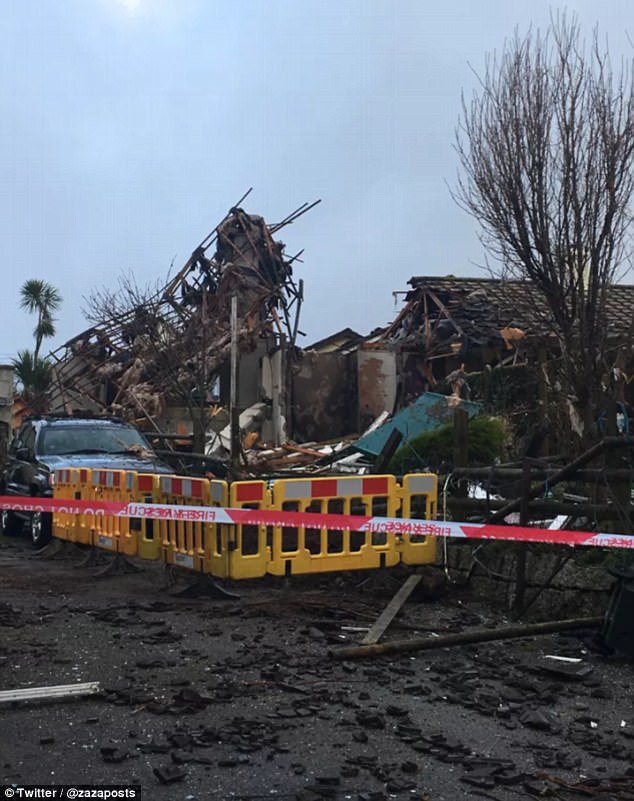 A man was rescued from under rubble after a huge explosion at a home in Carnkie village, in Cornwall, just after midnight

Neighbour Brian Kneebone, 65, said he was woken by a loud bang just after midnight.

He said: ‘I heard a great bang and looked out the window and saw lots of glass so called the fire brigade.

‘We got out of bed and we could see flames coming out of our neighbour’s bungalow.

‘The windows in what used to be my daughter’s bedroom were all shattered by the explosion.

‘We could see flames. I called the fire brigade but other people had already called them. The next thing I know is the firefighters turned up and started tackling the fire. They were here all night.’

He said neighbours from the adjoining bungalow, which is part of the same building, were in bed when their wardrobe collapsed on them.

‘They’re OK, they’re staying with another neighbour overnight at the moment,’ he said. 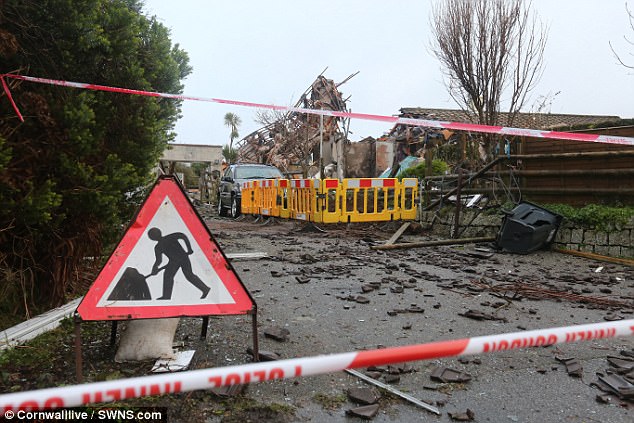 Richard Chalkley, a former marine, was still awake when the first explosion went off.

He said: ‘I went to the neighbours and they were in shock…the woman seemed to be hyperventilating.

‘I started waking neighbours and got them outside. When I came back, that’s when the second explosion happened.

‘Later I saw the bloke who seemed to be on fire. They managed to put him out and the clothes seemed to be burnt on his skin, and his head was open.’

Mr Chalkley said he felt guilty for not trying to rescue Mr Coddington.

He said: ‘I had been shouting but I couldn’t hear him because the fire was so loud. I should have gone in there but I didn’t know anybody was in there. I was in the military, so you know not to go in.

‘I just feel so bad. I managed to get everybody else out, but I should have helped the other guy. I just thought he were trying to turn the gas out.’

The bungalow is opposite the former Bible Christian Chapel and metres from Carnkie Village Hall.

The couple in the other half of the semi-detached bungalow, which has also been seriously damaged, were taken in by neighbours across the road and were said to still be in a state of shock this morning. 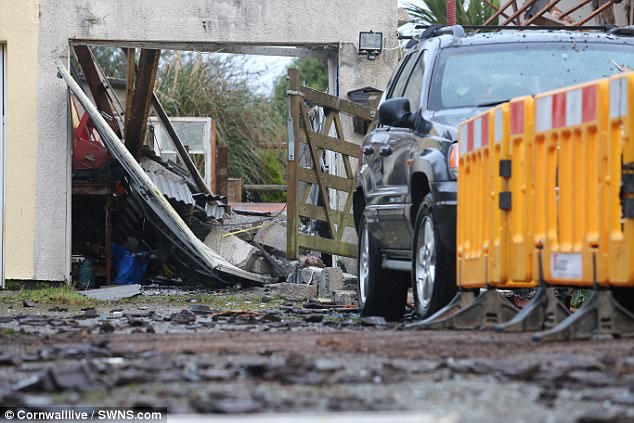 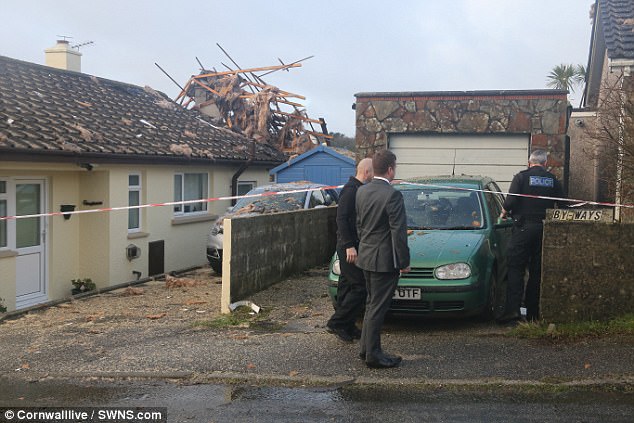 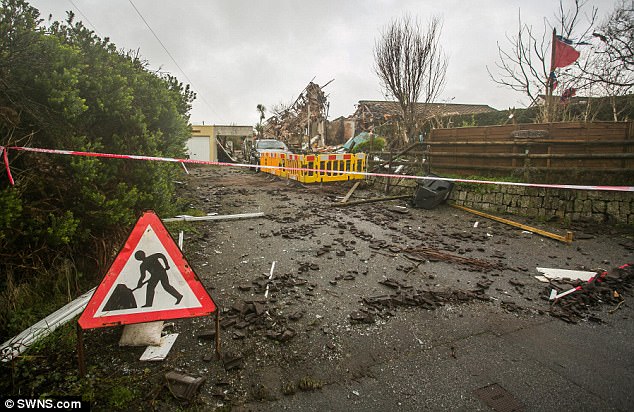 He said: ‘We live about 200m away and heard a huge bang and the house shook, then looked out the window and could see a house was on fire.’

Another neighbour wrote on Twitter: ‘One man was injured from neighbouring bungalow. It has removed half the side of the bungalow…the whole village was woken at 12.15am.

‘Some residents were blown from their beds by the vibrations.

‘[The] second explosion happened minutes later causing debris 200m away. The man was trapped under rubble and carried out by Mr (Martin) Mitchell.’ 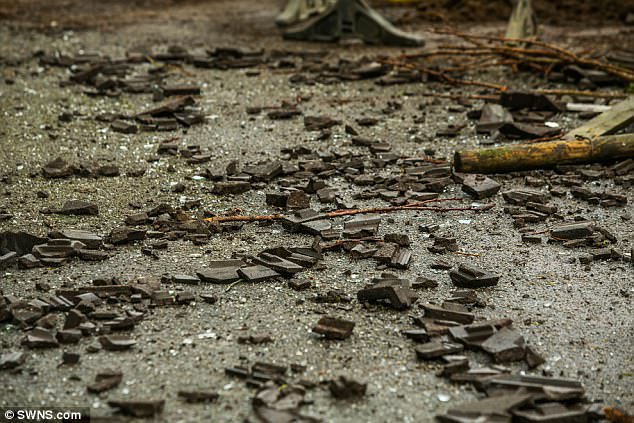 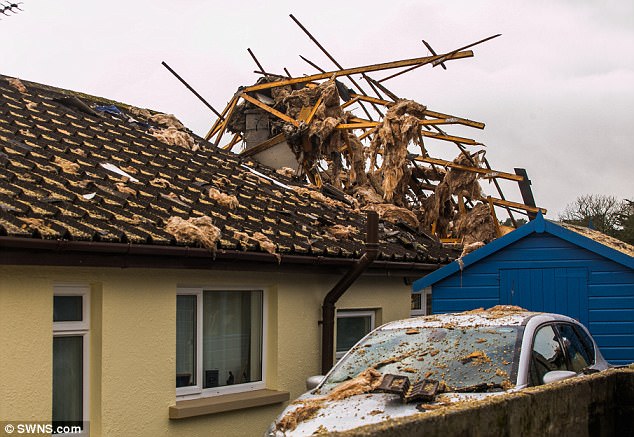 She said: ‘I thought it was a thunderbolt. My sun lounge and dining room had holes in the ceiling.

‘We went into the kitchen and there was water everywhere. It’s an awful situation.’

Her garden was pockmarked with embedded roof tiles from the bungalow.

‘We were lucky no-one was hit,’ she added. 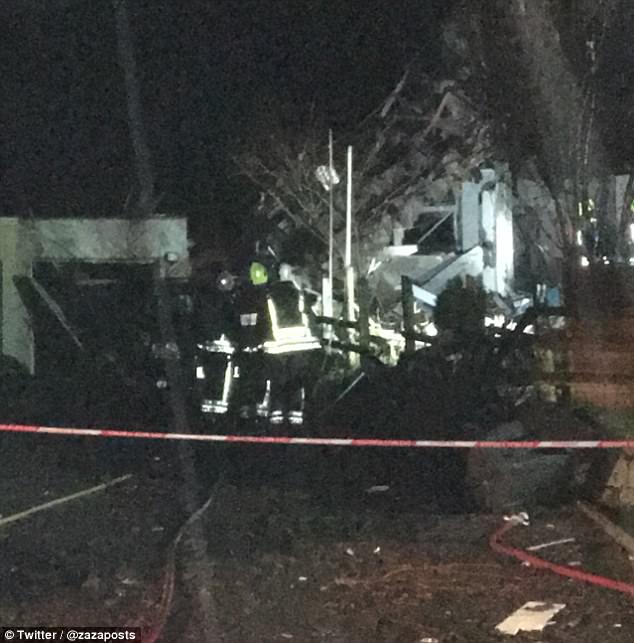 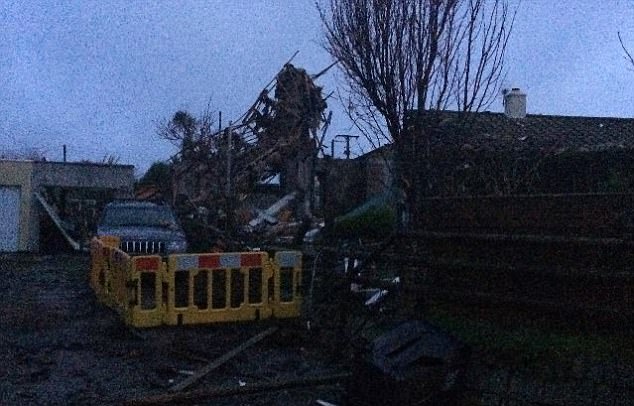 Residents were ‘blown from their beds’ when the explosion ripped off the side of the home at around 1.00am

Devon and Cornwall Police have confirmed the man suffered burns and the building was badly damaged.

Martin Wellington, force incident manager, said: ‘At 12.30am, we received a report of an explosion and fire at a house in Carnkie near Helston. A male casualty has been taken to Treliske Hospital.

‘Police and the fire service are currently investigating the cause of the explosion.

‘The gentleman was taken to Treliske with burns. It is my understanding there was ‘significant damage’ to a property’.

A Cornwall Fire and Rescue spokesperson said the fire was put out by 5.20am and an investigation will take place today.