Shane Galliers, 51, went to scatter the ashes of his late sister Michelle, 44, at her favourite Cornish beauty spot

A grieving man drowned when he tried to scatter his sister’s ashes and was swept into a raging sea, an inquest heard.

Grandfather Shane Galliers, 51, went with his family to scatter the remains of his 44-year-old sister, Michelle at her favourite beauty spot.

But he left the group on the beach to venture onto rocks so he could have ‘one final chat’ with his sister.

He disappeared from view when his mother, Patricia Howells, read out a letter by Michelle on Trebarwith Strand, near Tintagel, Cornwall.

Mr Galliers was swept into the turbulent waters by 15ft waves and drowned shortly after, the inquest heard.

His body has never been found since the tragedy on January 31, 2015.

Detective Constable Richard Martin told the inquest in Truro, Cornwall DC that Mr Galliers had put himself in an extremely risky position.

He said: ‘Shane Galliers and his family had been to the beach to scatter the ashes of his sister.

‘The water that day was severe, with 12 to 15ft waves. The strong waves of the Atlantic Ocean make it a popular surfing beach.

‘The state of the tide makes a massive impact on the beach area.

‘At 3.30pm the family were at the pub which overlooked the beach, and on this day they realised it was too stormy to scatter the ashes directly into the sea.

‘His sister’s ashes had been put into separate containers that had been decorated, and Shane left the group and was seen walking along the rocks by a passerby.

‘Shane was alone on the rocks by the sea. A large wave knocked Mr Galliers into the waters. 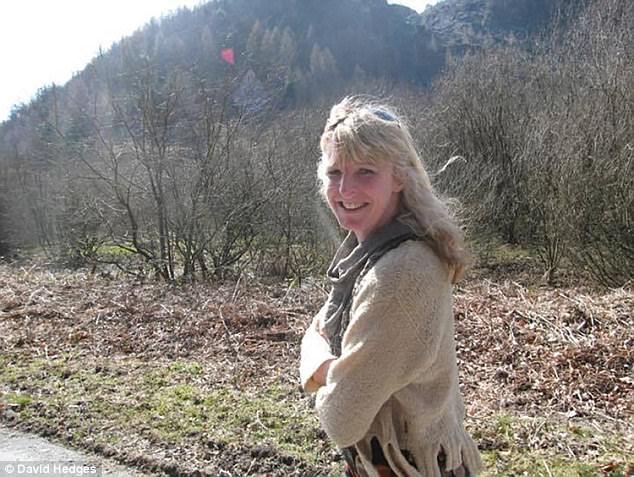 Mr Galliers was trying to scatter the ashes of his sister Michelle, pictured, at Trebarwith Strand, near Tintagel when he slipped off rocks into the stormy sea and drowned 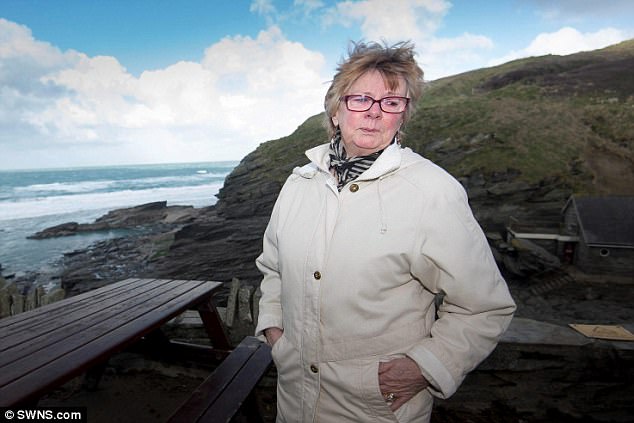 Mr Galliers mother, Pat Howells, pictured standing near the spot where her son died, said her daughter wanted her ashes spread on the beach at Trebarwith Strand in Cornwall 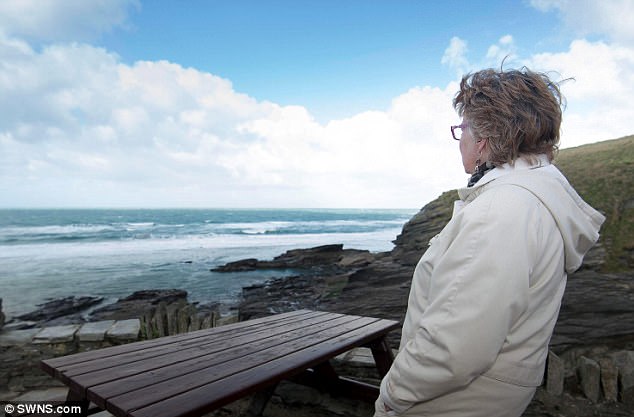 ‘The family realised and tried to help Mr Galliers. A life buoy was used but by this time he was overcome by the cold sea.

‘His brother-in-law jumped in to try and help but he was washed inshore.

‘A wave forced Mr Galliers into a rock and he was forced under the water.’

The coastguard was told that Mr Galliers could be seen in the water facedown and the lifeboat continued to search the sea in treacherous conditions.

DC Martin added: ‘He was not depressed but was grieving the death of his sister at the time.

‘The facts are that Mr Galliers put himself in a risky position that day.

‘He was alone on the rocks, he was dressed in warm clothing, he was of slight build and had a back operation that left him disabled.

‘It was clear he was on his own, it is my opinion that he died in the sea moments after falling in.’ 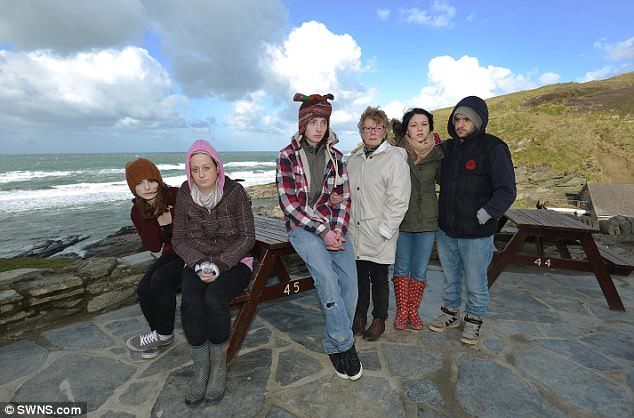 Members of the family, pictured, gathered to scatter the ashes on January 30, 2015 when Mr Galliers tragically slipped from a rock and fell into the ocean. His body has not been recovered

He said: ‘On January 31, 2015, Mr Galliers was on the rocks at the edge of the sea at Trebarwith Strand.

‘He was a group that was there for the scattering of his sisters ashes.

‘He ventured close to the sea and he was then hit by a large wave that dragged him into the sea.

‘He drowned and regrettably his body was never found.

‘This was not a suicidal act.’

Coastguards, an RAF helicopter and lifeboat crews were all involved in the initial rescue operation.

It is feared Mr Galliers would not have been able to survive in the freezing waters in conditions described by rescuers as ‘turbulent and chaotic’.

Speaking previously, Shane’s mum Patricia Howells, told how the family had gone to scatter the ashes of Shane’s sister who had died three months earlier.

Mrs Howells , from Camelford, Cornwall said: ‘The family were all meeting at Trebarwith Strand so we could scatter the ashes of my daughter, Shane’s sister, who died a couple of months back.

‘We were waiting for the tide to go out quite a bit as the sea was very rough. In the end we decided it would be safer to go up to a little river on the beach and do it there.

‘Michelle died a couple of months ago and she wanted her ashes scattered on the beach as that’s where her grandmother and uncle are.

‘It was where she grew up – we always used to come down to this beach – so she wanted her ashes scattered there.

‘Each member of the family had their own pot of ashes to scatter. For some reason Shane decided he wanted to go the other side of the river to all of us.

‘I think he wanted some space to have one last chat with his sister. We didn’t even know he was there.

‘He just wanted a private moment with his sister. The first we knew about it was when someone shouted ‘there’s someone in the water’.

‘We didn’t think it could be any of our group as we were all together, but then we realised it was Shane.

‘It’s all a very big shock for all of us. First I lost my daughter and now I have lost my son, it’s so difficult to come to terms with.’