She has been keeping her pregnancy under wraps from her family.

But Coronation Street fans are baffled the Eva Price’s pregnancy still hasn’t been discovered, as her growing bump becomes more difficult to hide.

Taking to Twitter after Thursday’s show, viewers asked how Eva had managed to keep her pregnancy a secret for so long, as the blonde beauty took herself to the doctor’s over fears for her baby’s health.

Hard to hide: Coronation Street fans have been wondering how Eva Price’s huge baby bump has still gone unnoticed by her family, rushing to Twitter to express her bewilderment

Fans know that Eva (played by Catherine Tyldesley) is keeping her unborn child a secret from the rest of the Street, with only her sister Toyah (Georgia Taylor) in the know as part of her plan to adopt the baby.

The siblings have gone to great lengths to keep their families from finding out, lying about antenatal classes, throwing away alcohol, and even failing to defend Leanne (Jane Danson) in a fight against Tracy Barlow (Kate Ford).

But fans took to Twitter on Thursday to say the soap is beyond logic, as Eva’s bump went completely unnoticed by Leanne, Peter Barlow (Chris Gascoyne) and their son Simon (Alex Bain).

Getting bigger: Eva has been struggling to hide her growing baby bump, as she keeps her pregnancy a secret before the baby is adopted by her sister Toyah Battersby

One fan wrote: ‘Your telling me that no one has spotted Eva’s massive baby bump?’ while another added: ‘Eva is 7 months pregnant and NOBODY has noticed. Are they all blind?!?’

A third tweeted: ‘How has Leanne or anyone actually not worked out that Eva is pregnant?’

Another fan commented: ‘Your telling me no one has spotted Eva’s massive bump under that coat??’

Tough time: Fans also saw Eva rushed to hospital on Thursday as she worried something may be wrong with her baby 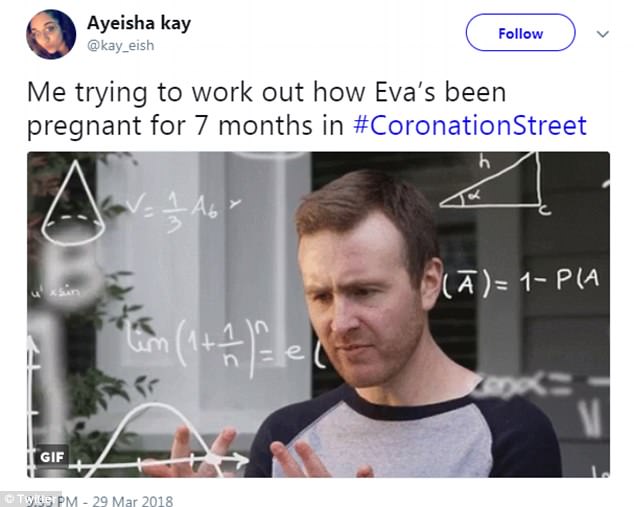 That’s not right! Viewers of the ITV soap rushed to Twitter wondering how Eva’s pregnancy had been kept under wraps for so long, with her growing bump becoming harder to hide 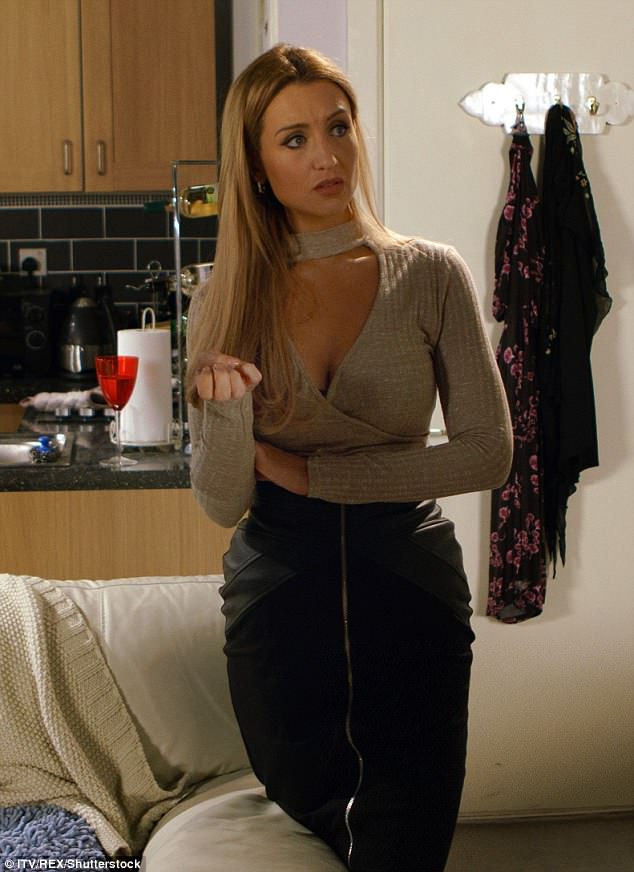 Not-so slim: Eva’s latest looks have been a far cry from her usually skimpy ensembles

Eva’s attempts to hide her pregnancy come as fans saw her realise that something wasn’t right with the baby, heading to the doctor’s in tears for an emergency scan in Thursday night’s show.

Fans will have to wait and see whether the baby is OK, but this storyline is set to heat up over the coming weeks as they build to actress Catherine’s exit this summer.

Eva fell pregnant with Aidan Connor’s (Shayne Ward) baby soon after their wedding was called off, and decided to hide the news as she was in a relationship with Adam Barlow at the time.

But should her pregnancy progress, it seems the blonde beauty will have more of a challenge in keeping the news a secret. 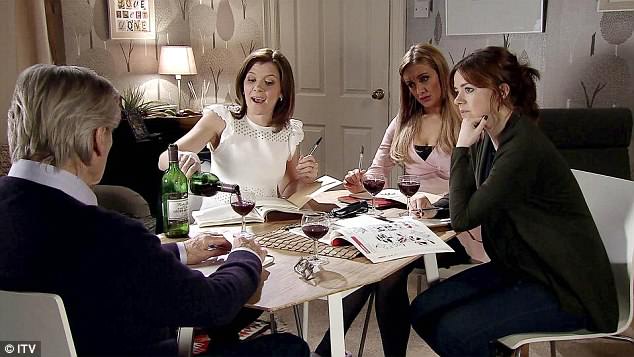 Harder to hide: Eva’s pregnancy comes as part of actress Catherine Tyldesley’s exit storyline, with the blonde beauty set to leave the soap this summer after eight years in the role