Many viewers were outraged by the ‘appalling’ violence in the pre-watershed episode which aired at 8.30pm, with some saying the soap had ‘gone way too far’ and the distressing scenes were ‘more like a horror movie’ than a family-friendly TV programme.

Having already set his sights on framing Anna Windass (Debbie Rush) for the attempted murder of Seb Franklin (Harry Visinoni), Pat blackmailed Andy by telling him he could can have his freedom back if he killed Vinny.

Chilling scenes: Coronation Street fans were in for a double shock this evening as evil Pat Phelan (pictured) murdered his hostage Andy Carver moments after forcing him to kill fellow conman Vinny Ashford

Pat had convinced Andy that he would let him go if he helped him to take Vinny hostage as his ‘replacement’. With freedom in mind, Andy co-operated, but he was unaware that Pat had a dark twist set in store for him.

Phelan sought revenge on Vinny after he made off with all the money from the duo’s plans to scam Weatherfield’s residents by selling flats they had no intention of building.

The chilling episode saw Vinny battered and bruised and covered in blood, as he lay gagged and tied up, before Pat yelled at Andy until the terrified hostage shot Vinny.

Then, when Andy considered shooting Pat in revenge after being locked up for months, brainwashed and tortured by the cobbles’ resident villain, Pat lost his temper and shot Andy dead in turn. 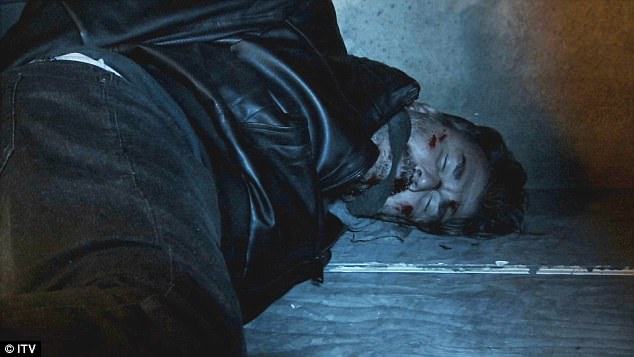 Batterd and bruised: Pat sought revenge on Vinny (pictured) after he made off with all the money from the duo’s plans to scam Weatherfield’s residents by selling flats they had no intention of building 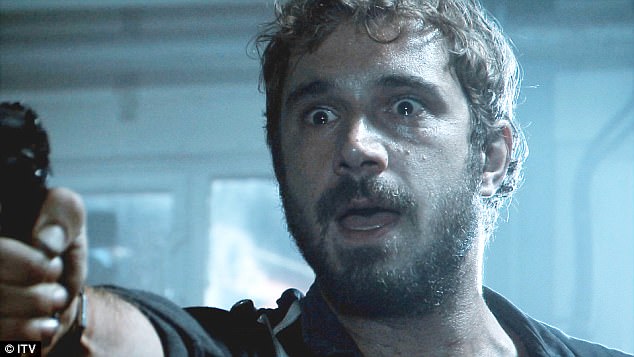 Murderer and murdered: Andy was seen wielding a gun with a crazed look in his eye, as Pat goaded him into committing the crime, before shooting him dead himself

Viewers compared the episode with the horror film, SAW, as well as remarking on the high level of violence despite the show airing before the 9pm watershed.

One Twitter user said: ‘When did #Corrieturn into SAW 4?? Intense.’ Another added: ‘Vinny and andy are re-enacting the first saw film #Corrie.’

An outraged viewer said: ‘More like a horror movie & before the watershed? NOT the coronation street I know and love #gonewaytoofar #Phelan #Corrie #murder’

Another added: ‘In my opinion this story line with Pat Phelan on @itvcorrie needs to stop it is getting to annoying and too violent for before 9 o’clock.’ 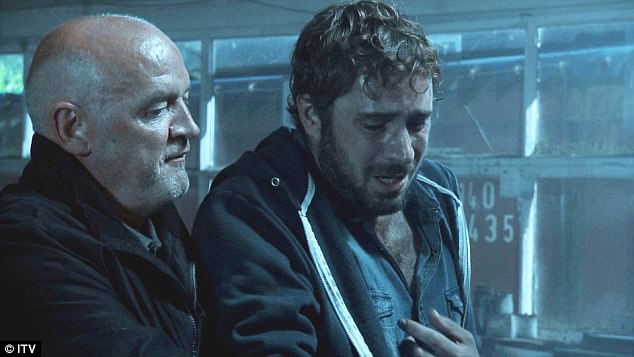 Murder twist: Pat convinced Andy he would let him go if he helped to take Vinny hostage as his ‘replacement’ – but actually he wanted him to kill Vinny 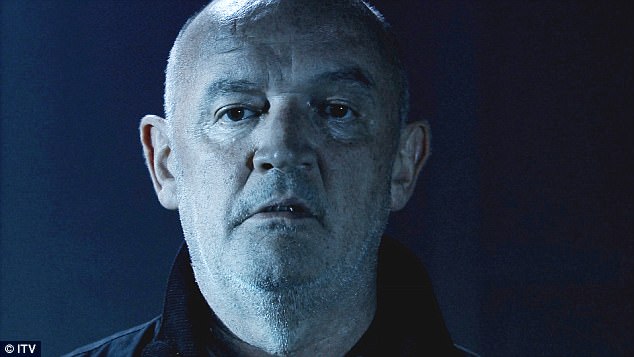 Seeking revenge: Evil Phelan has set about framing Anna Windass for the attempted murder of Seb Franklin after he was left lying in a pool of blood on the cobbles

It comes after Coronation Street viewers were left on tenterhooks on Wednesday night as Seb lay in a pool of blood on Weatherfield’s cobbles. But some eagle-eyed fans were more concerned with working out how Anna had managed to dial 999, after coming across the teen, without actually inputting a single number.

Viewers took to Twitter to query why Anna hadn’t dialed a single digit or even looked at her phone during the incident.

One person tweeted: ‘Who are these directors on Corrie? Another amateurish mistake Anna not dialling 999 #Corrie’. 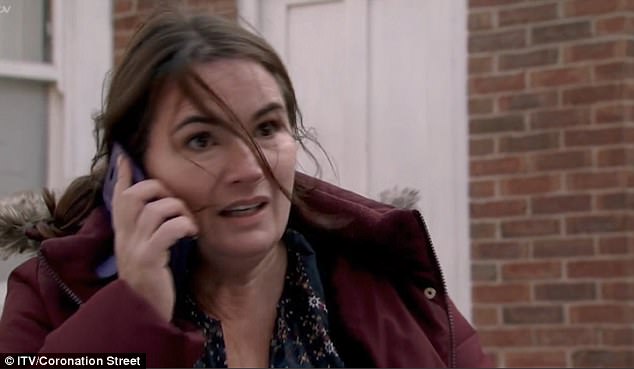 ‘Just watched @itvcorrie and saw a mistake! Anna Windass not dialling 999 when calling an ambulance! #whatsgoingon’, another posted.

A third said: ‘Anna must have 999 on speed dial because she just put the phone next to her ear #corrie’.

The villain set up a fight between Seb and Anna, and then ensured Seb fell from his ladder while window cleaning. 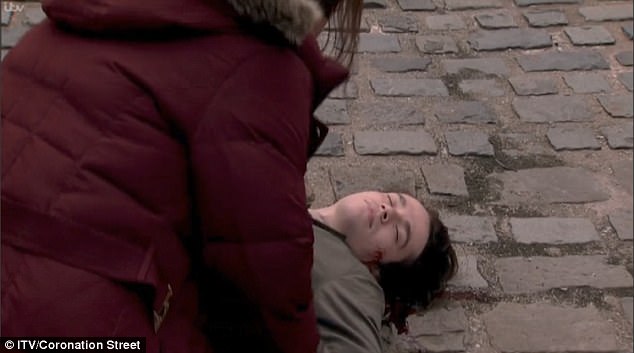 Emotional scenes: Viewers were left on tenterhooks on Wednesday night as Seb Franklin lay in a pool of blood on Weatherfield’s cobbles 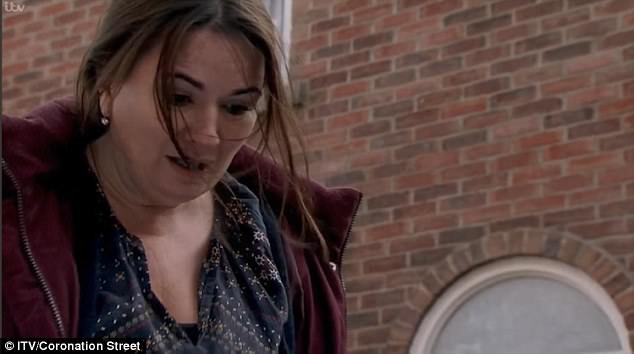 Framed: Pat set up a fight between Seb and Anna, and then ensured Sam fell from his ladder while window cleaning

Meanwhile, actor Connor McIntyre, who plays Pat Phelan on the soap, has spoken candidly of how his outlook on life has changed following a ‘massive’ heart attack he had suffered from a few years ago.

Speaking to The Mirror, he revealed the near-death experience has helped him to emit any negativity from his life, after confessing he ‘should have been gone’, but was luckily saved by hospital staff.

‘I had a stent fitted and here I am, still kicking,’ he said. ‘I have become increasingly philosophical about things… I have had a near-death experience and that gets your priorities sorted.’

Connor added: ‘I have stared death in the face. Life is short.’ 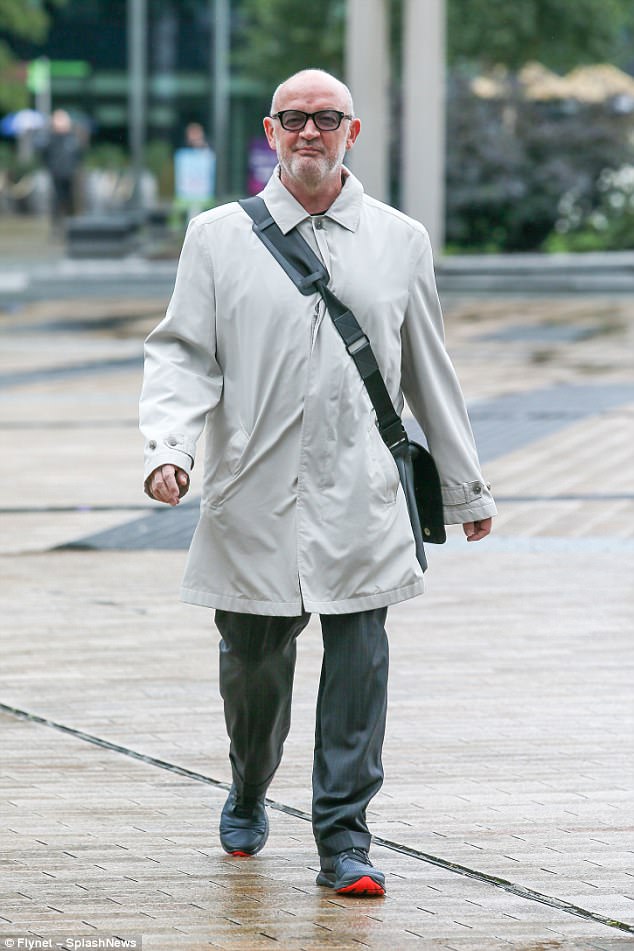 ‘I stared death in the face’: Actor Connor McIntyre, who plays Pat Phelan on the soap, has spoken candidly of how his outlook on life has changed following a ‘massive’ heart attack