Her future on Coronation Street is said to be at risk under the eye of new soap boss, Iain MacLeod.

Yet Katie McGlynn didn’t appear to have a care in the world as she enjoyed a night out partying with her best friend Lee Bennett in Manchester on Friday.

Dressed to impress for their night out, the 24-year-old actress – who plays Sinead Tinker on the soap – dazzled in a fitted top and mini skirt that showcased her figure.

Loving life: Her future on Coronation Street is said to be at risk. Yet Katie McGlynn didn’t appear to have a care in the world as she enjoyed a night out partying in Manchester on Friday

The blonde bombshell flashed a hint of her bra beneath her fitted black shirt, that she tucked into a grey plaid mini skirt.

Sheathing her toned pins in tights, the starlet boosted her frame with a pair of heeled ankle boots, whilst a Gucci belt accentuated her slender waist.

Upping the glamour, the stunning soap star wore her glossy golden locks in retro Hollywood waves that framed her pretty features, whilst she sported a pair of fluttering fake eyelashes.

And Lucy wasn’t the only Corrie babe out on the night, as across town, Lucy Fallon, 21 – who plays Bethany Platt – was celebrating her boyfriend Tom Leech’s birthday with a romantic dinner. 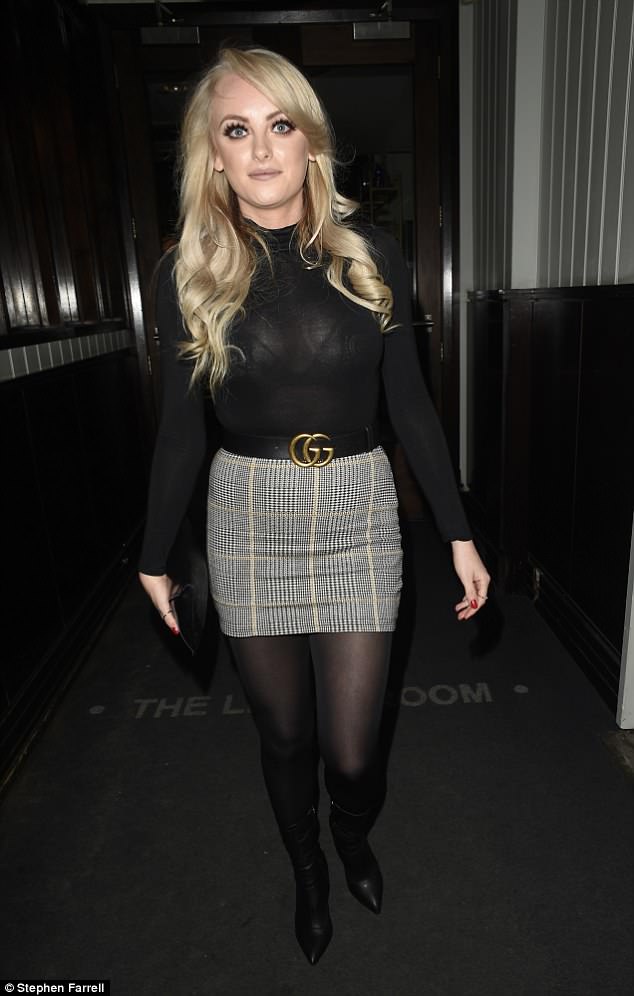 Legs eleven! Dressed to impress for their night out, the 24-year-old actress – who plays Sinead Tinker on the soap – dazzled in a fitted top and mini skirt that showcased her figure 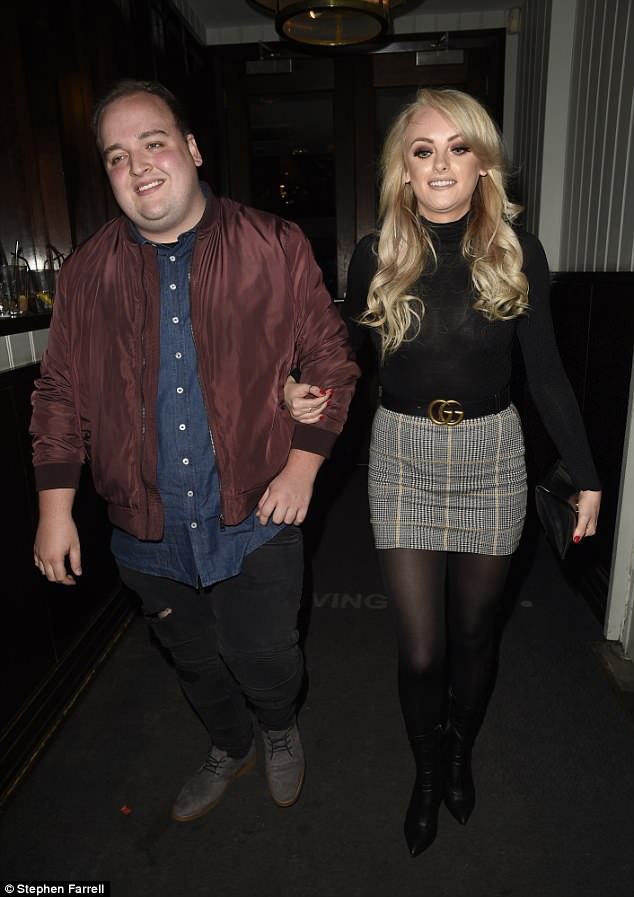 Leggy lady! Sheathing her toned pins in tights, the starlet boosted her frame with a pair of heeled ankle boots as she teetered along arm in arm with her best friend Lee Bennett

The youngsters were out enjoying the weekend amid claims their jobs could be in jeopardy in order to give the older and longer serving characters on Coronation Street better storylines.

Iain MacLeod was announced as the replacement for boss Kate Oates last week, and a source told The Sun that the cast of the ITV soap were concerned over the changes Iain might bring to the soap.

The source said: ‘Kate was particularly popular with the younger stars.

‘Her departure has left people worried the new producer will want to end the violent stuff and start again. And lots are worried about a cull.’ 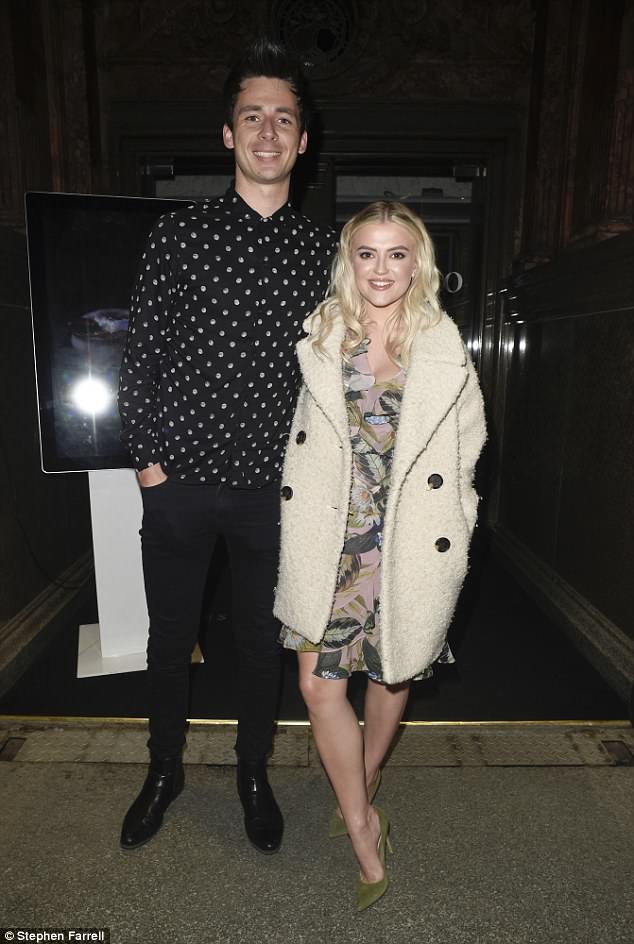 Cute couple: Lucy wasn’t the only Corrie babe out on the night, as across town, Lucy Fallon, 21 – who plays Bethany Platt – was celebrating her boyfriend Tom Leech’s birthday with a dinner 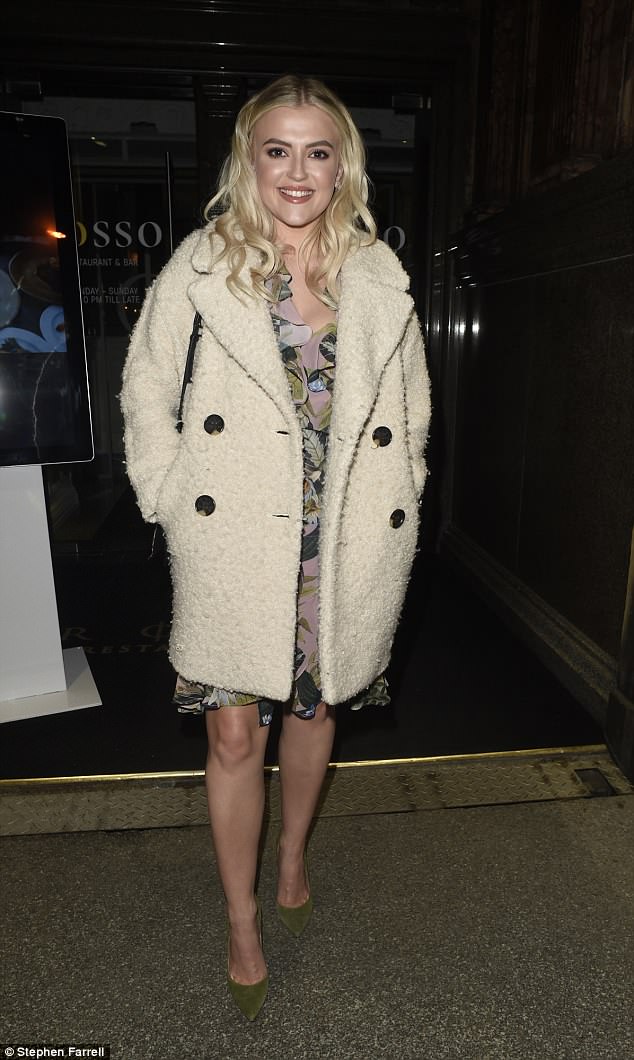 Legs eleven! Lucy dazzled in a floral midi dress that she wore beneath a cream teddybear coat

Another source added: ‘I think they might have a rude awakening in store.’

A Coronation Street spokesperson told MailOnline: ‘This is speculation as Iain MacLeod is on paternity leave and hasn’t had any meetings relating to the programme and the cast.

‘He won’t be doing so until he joins Coronation Street in June.’ 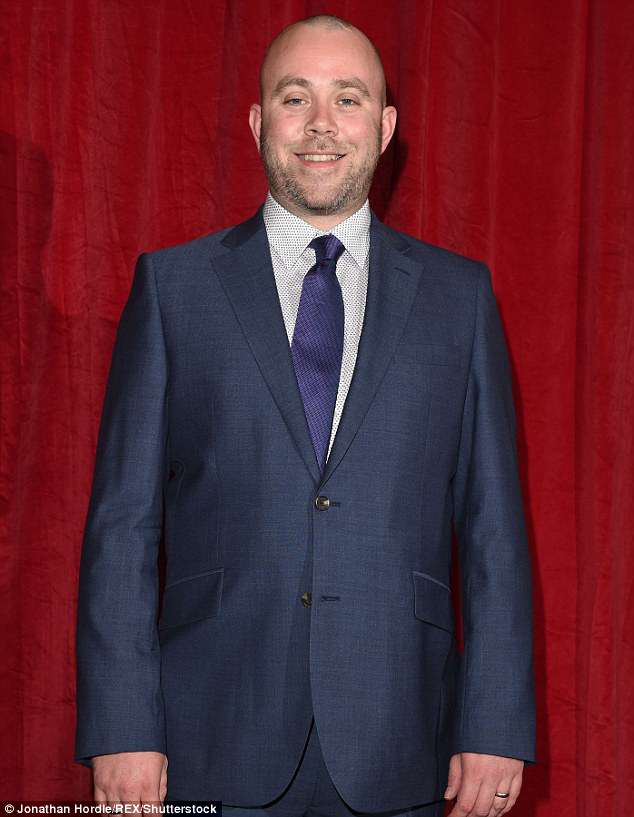 For the chopping block: Coronation Street’s new boss Iain MacLeod is reportedly planning to axe younger stars to give long-serving characters better storylines, according to The Sun 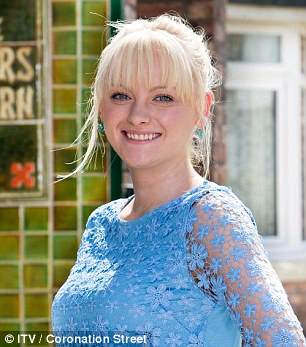 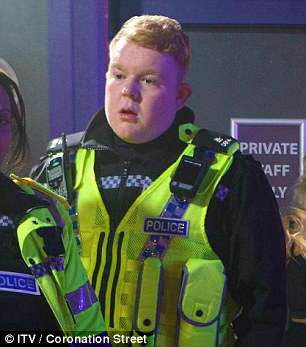 Out: Katie McGlynn and Colson Smith who play Sinead and Craig Tinker will reportedly be at risk following Iain’s appointment as producer

Iain was announced as Kate’s replacement on Tuesday just a day after the boss tended her resignation.

The 38-year-old departed amid ongoing criticism for controversial plot choices, along with record numbers of complaints to media watchdog OfCom. 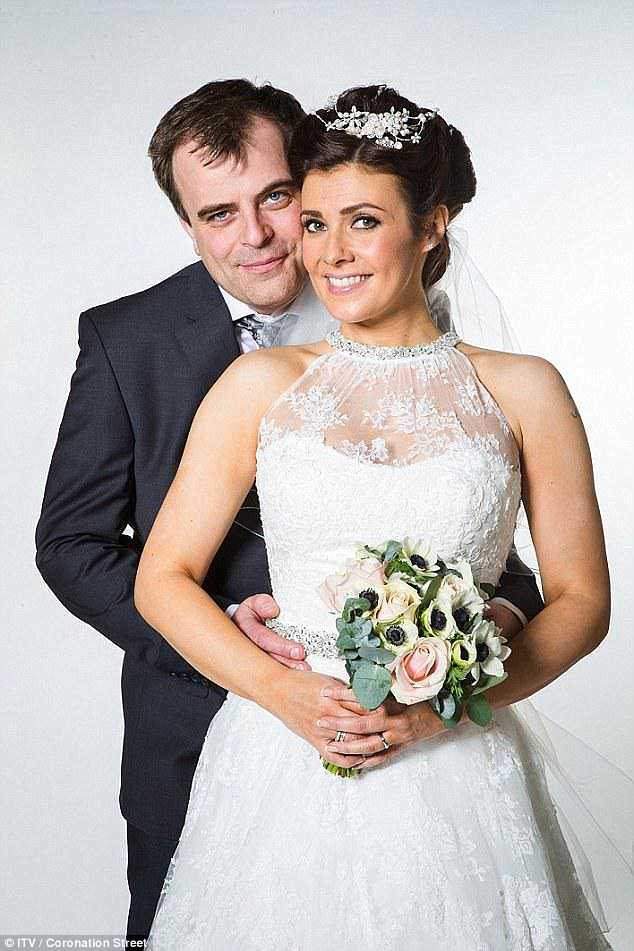 Safe: Meanwhile long-serving stars such as Simon Gregson and Kym Marsh (Steve McDonald and Michelle Connor) are reportedly not in line to be axed 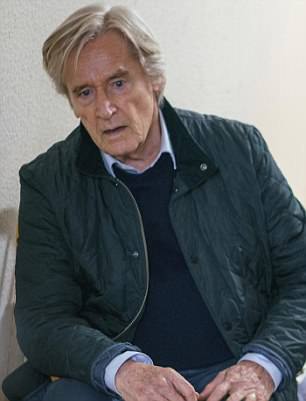 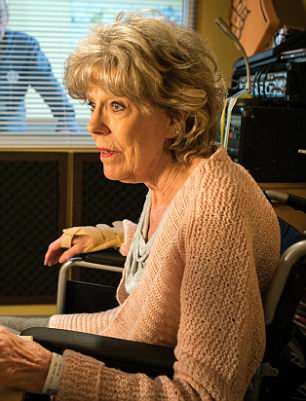 Kate is responsible for such storylines as David Platt’s male rape ordeal, Pat Phelan’s murderous spree and Bethany Platt’s sex trafficking, all of which have earned ITV a barrage of official complaints from viewers.

Confirming the news, Kate told The Sun: ‘I’ll be forever grateful for this opportunity and all it has given me, but I’m also excited to try something new.’

On Monday, ITV told MailOnline: ‘Iain MacLeod had been appointed as the new Producer of Coronation Street, following Kate Oates’ decision to leave the soap and move into drama series production.

‘Kate is moving to work with ITV Studios owned label Tall Story Pictures, where she will produce the forthcoming second series of Bancroft, starring Sarah Parish. 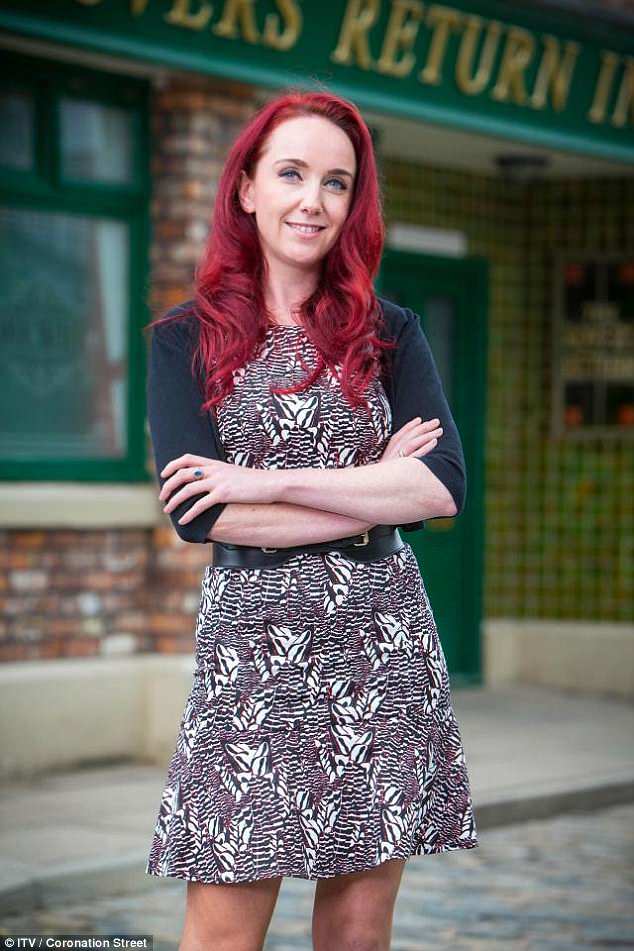 Departing: Kate Oates, 38, announced she had resigned as producer on Monday after two years in the role, following an onslaught of criticism for controversial storylines 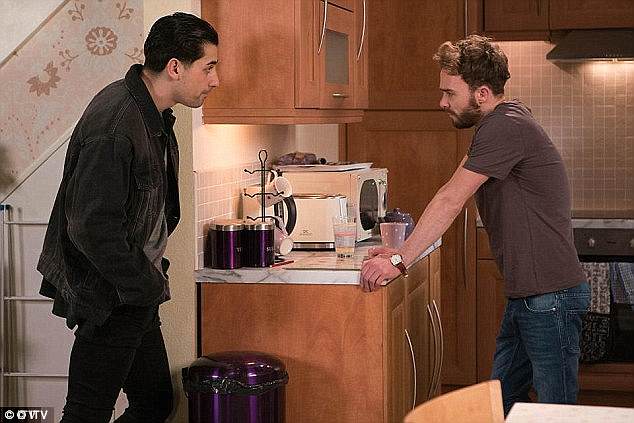 Controversial: One of the most talked about plotlines of the last six months, has been the male rape plot involving David (right, played by Jack P. Shepherd) and perpetrator Josh (Ryan Clayton)

‘Kate and Laura will produce blocks of episodes on a rotational basis and take responsibility for the day to day running of the programme. The Emmerdale appointments will take effect from the beginning of June, to coincide with Iain taking the helm at Coronation Street.

‘Kate and Iain leave their respective soaps in strong form, as each is up +5% year-on-year for volume, on both consolidated and overnights ratings. In 2018 to date, Emmerdale has increased its average audience in the consolidated ratings, pulling ahead to become the UK’s second most popular soap. 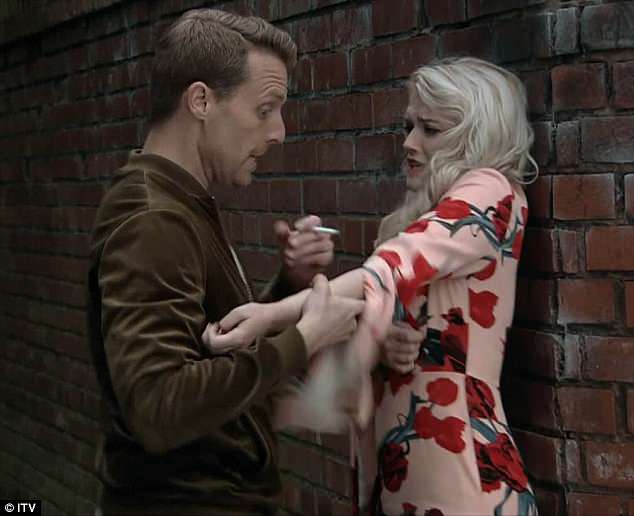 A source told The Sun: ‘There’s a feeling of jumping before she [Kate] was pushed. But she is staying within the ITV family.

‘The storylines she worked on, while rating successes, were very divisive among viewers and the cast and crew. Everyone is looking forward to seeing what the future on the soap looks like now.’

She said: ‘We’ve got a new boss. It’s always sad to see someone go. Kate has done very well and we wish her the best. 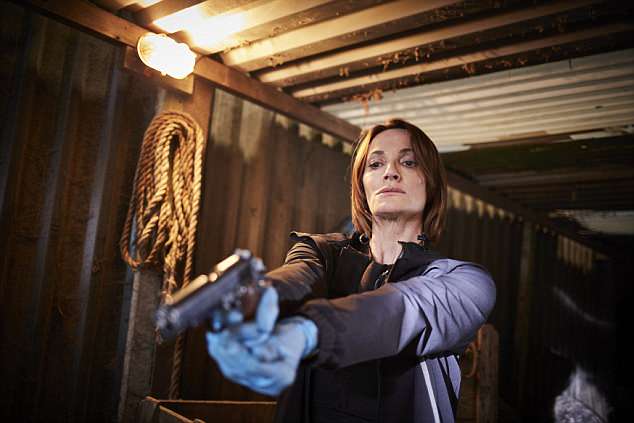 Emmerdale producer Iain MacLeod will depart the Dales in June to replace Kate, and Sally cannot wait to see what he has in store for ‘Corrie’.

She added: ‘We’re looking forward to working with Iain MacLeod in June. It’s all changes, as usual on ‘Corrie’. It’s all very exciting.’

Kate hinted at a departure last month when she told metro.co.uk : ‘I am only ever keeping the seat warm, as is every producer.

‘I am incredibly proud of what we have achieved – from tackling some seriously important storylines to opening up a brand new set and making a smooth transition to six episodes.’ 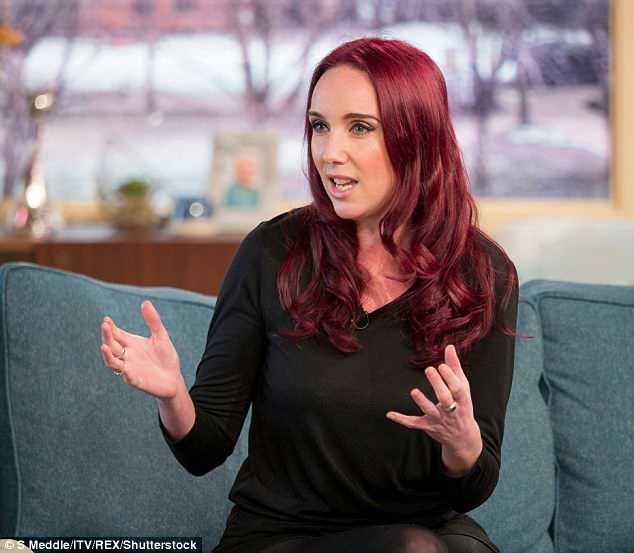 Backing her up: Kate appeared on This Morning last month to talk about the soap’s dark new tone, defending the storylines for tackling taboo issues

Despite climbing viewing figures for the 58-year-old soap, complaints have overshadowed Kate’s success.

Dark scenes saw David led to the bedroom by the character Josh (Ryan Clayton) after being drugged.

In the aftermath, the soap mainstay has struggled to cope and is falling into deeper trouble with violence, the law and one night stands. 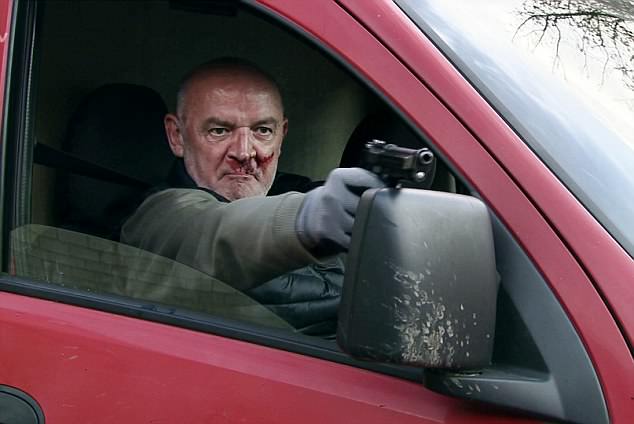 Violent: Pat Phelan’s murderous rampage has also left viewers shell-shocked but the long-running storyline is expected to descend into yet more dramatic violence after he returns from the dead

The OfCom complaints followed outrage from fans surrounding Pat Phelan’s violent murder of mechanic Luke Britton in January. This alone sparked 541 complaints, of which the soap has now been cleared.

In the explosive scenes, after turning a gun towards Luke (Dean Fagan), Pat (Conor McIntyre) trapped the character in his car before it was engulfed in an explosion.

Soap chief Kate made a dramatic impact on the soap soon after taking over as producer in August 2016, setting the stage for Bethany Platt’s grooming ordeal which left fans shell-shocked with the uncomfortable scenes. 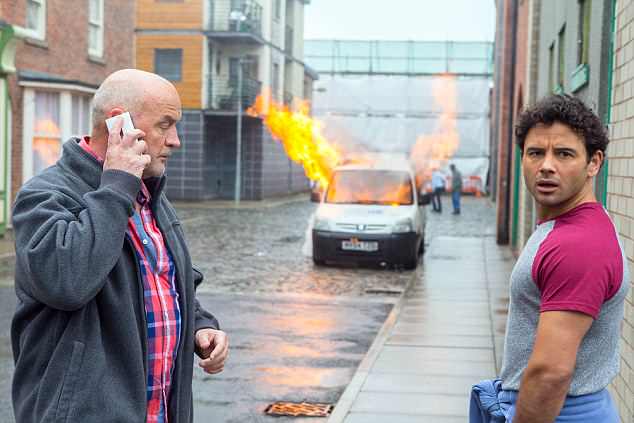 Explosive: Many have tried to end Pat’s reign of terror, yet things keep getting darker for the soap’s well-loved characters

Kate spoke on This Morning in March to defend her choice of dark plots, amid calls for her to resign.

She said: ‘I think it’s because it’s a male rape it’s in a different category. It’s a double standard against male.’

Adding that the plot is formulated to focus on male mental health, and spark the difficult conversations among families, she admitted: ‘It’s not about shocking visual, we’re pre-watershed and we make our decisions very carefully.’ 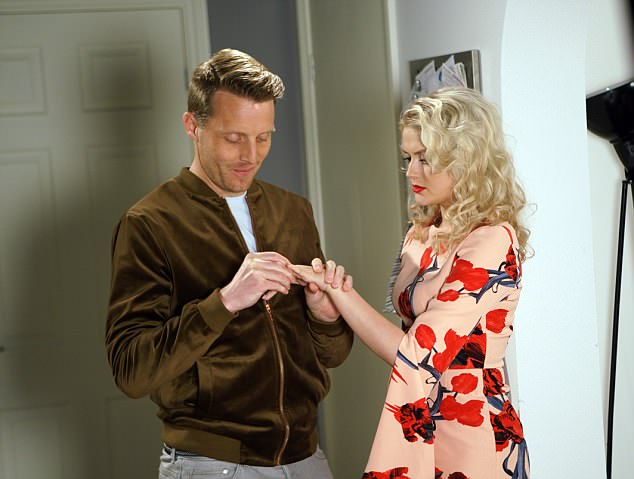 Grooming: Not long after her arrival, Kate was responsible for the controversial plotlines involving Bethany

‘There’s a lot to praise here! Kate Oates has transformed Coronation Street during her tenure. This has been reflected both in the huge critical acclaim the show has been getting and in the ratings.

‘We are now used to opening the overnights and seeing Coronation Street has delivered its highest ratings for many years, a herculean achievement in this box set era. Kate has done this whilst putting on screen some groundbreaking and socially important stories such as the Bethany grooming story and David’s rape story.

‘It is a testament to her brilliant editorial touch that these stories, though difficult, have been both credible and engaging. Meanwhile, Kate has unleashed on us one of the finest villains in soap history with Pat Phelan and his dastardly deeds. 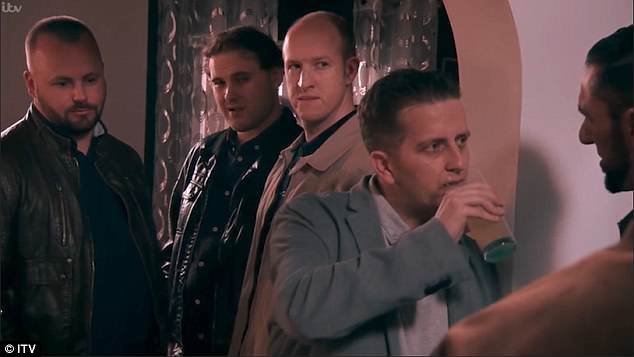 Complaints: Levels of complaints have reached a record high, just a year after the soap featured a sex ring and gang rape plot

‘And the show has continued day in day out to provide the viewer with top notch Corrie humour from Liz to Moira, from Steve to Tracy, from Sally to Tim. Doing all this while taking the show from five episodes to six episodes a week is a phenomenal achievement by Kate and something of which those who work on the show and those who watch it are hugely appreciative.’

On Iain MacLeod’s time at Emmerdale, John commented: ‘Meanwhile, over the Pennines, Emmerdale has been going through its own golden period under Iain MacLeod’s aegis. It too has built its audience volume and share.

‘And it has delivered some truly memorable storylines. Ashley’s dementia was notable not just for the strength of the story, but for the way it was told with some soap defining drama, such as the episode all seen through Ashley’s point of view.

‘Equally hard hitting, though in a different way, was the multi car pile up on Hotten bypass. Emmerdale has a reputation for delivering big stunts and this one was the biggest and most spectacular, as well as the most intricately plotted and it came from the perfect soap brain of the supremely talented Iain MacLeod.

‘It is no wonder Emmerdale has won pretty much a clean sweep of the awards in the last year, a run interrupted only by Coronation Street’s RTS Award.’ 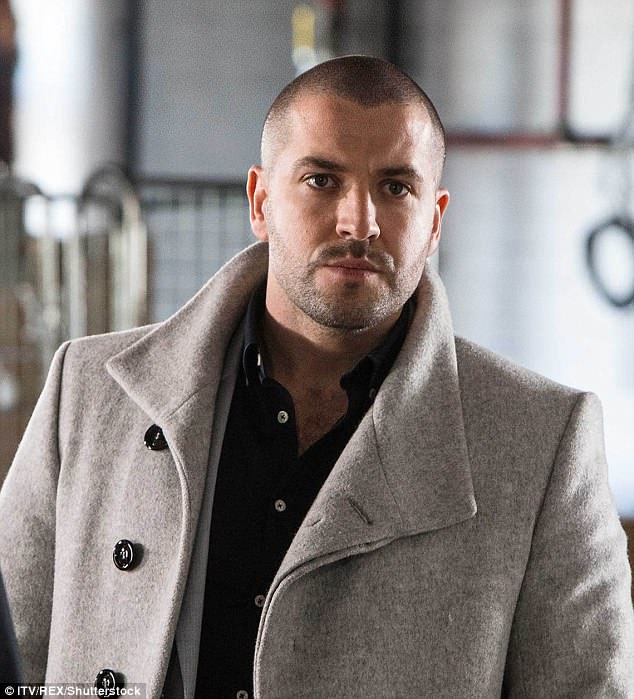