Coronavirus Australia: Anti-vaxxer claims to be a journalist to travel to regional NSW

An anti-vaxx Sydneysider who claimed to be a journalist after travelling into regional New South Wales livestreamed himself being busted by the cops, who slammed him for ‘putting lives at risk’.

Self-proclaimed journalist Chris De Bruyne, who shares videos under the account Chriscoveries, was filming himself attempting to travel north to support a rumoured truck blockade stopping traffic heading south on the M1 motorway towards Sydney on Tuesday.

De Bruyne sets up a chair in the bush overlooking the freeway at a Wyong rest stop and films himself watching traffic before he is approached by an officer.

‘You’re not a real journalist, you’re not undertaking paid work. So what you’ve done is you’ve left the Greater Sydney area, come to regional NSW, you’re unvaccinated, you haven’t been tested,’ the policeman calmly says as De Bruyne continues to glance at the camera.

‘You’re putting people’s lives at risk. For what? What are you trying to prove here?’ 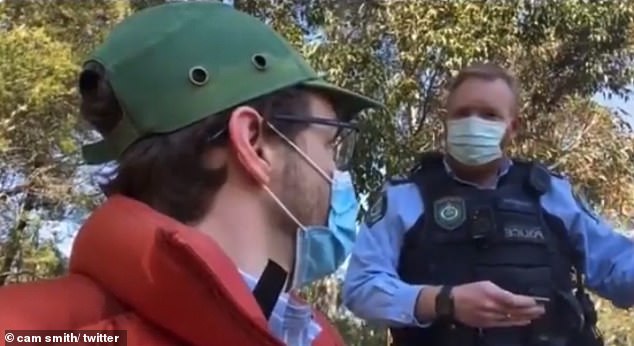 ‘Take your identification. The officer over there has told me he’s already issued you several infrigement notices and committing criminal offences here,’ the officer tells De Bruyne

De Bruyne, who has been described as a ‘far-right vlogger’, has just 700 subscribers on YouTube and barely 4,000 likes on Facebook.

He has shared videos from various anti-lockdown rallies around Sydney and drew attention when he gatecrashed a Black Lives Matter forum at Sydney University in 2020.

A truck blockade in Queensland earlier this week stopping food distribution throughout the country sparked rumours of a similar demonstration on the outskirts of Greater Sydney, with De Bruyne heading up to ‘cover’ the potential event for his measly following.

‘This morning I headed north to check out the rumored truck protest/blockade said to be happening on the M1,’ he posted to Facebook.

‘After checking the restrictions the day before, I felt confident I met the covid restrictions, rapidly changing as they are.’

He parks at the popular rest stop in Wyong, noting half a dozen police cars stopped in the car park.

De Bruyne takes out a foldable chair and walks into the scrub to a point overlooking the freeway where he says he is waiting to see if the blockade is established.

The vlogger is initially approached by an officer who politely asks why he is there and if he can show a form of accreditation.

De Bruyne hands the policeman a card, before he asks questions about the identification.

‘I don’t know what the rules are, and it seems a lot of people don’t know,’ he says in the footage.

The ‘far-right’ activist is then asked to return to Sydney where he could receive a fine at a later date, but instead he sits in his foldable chair for what De Bruyne describes as 20 minutes. 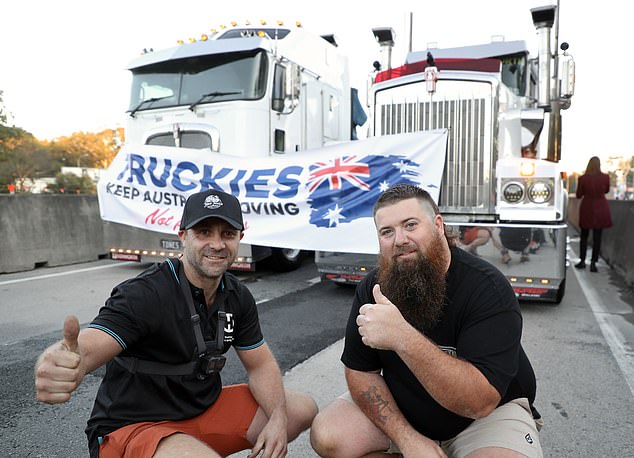 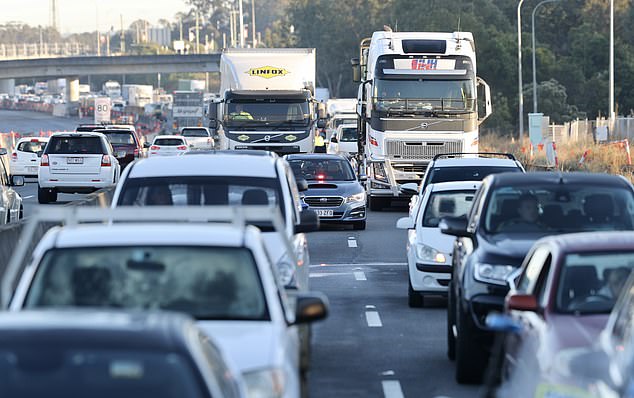 Pictured: Traffic backed up on the M1 at Reddy Creek, south of Brisbane. The protest was announced only an hour earlier to thwart police

He is then approached by another officer who is less accepting of his presence and the card he attempts to pass as proof he is a journalist.

‘So we’ve done some research into this press pass, it’s not worth the plastic it’s written on,’ the officer says.

‘All it is, it’s a simple website of an alliance of people who say they belong to the media.’

The policeman calmly scolds De Bruyne as he sits on his foldable chair, continually glancing at the camera and back at the officer as he questions the vlogger’s motives.

‘You’ve come from Greater Sydney area to a rest area where we’ve got a lot of people, truck drivers, coming in and out who that are now going to travel all over the country,’ the policeman says.

‘What are you trying to prove? All you’re doing here is putting people’s lives in danger.’

De Bruyne sits in silence as the officer notes that he has already been issued infringements in the past and tells him to leave immediately or face further consequences.

‘Take your identification. The officer over there has told me he’s already issued you several infrigement notices and committing criminal offences here,’ he says.

‘You need to get in your car and move on or you’re going to be arrested.’ 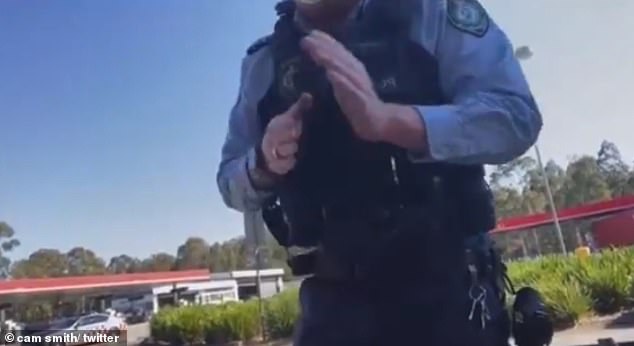 The policeman calmly scolds De Bruyne as he sits on his foldable chair, continually glancing at the camera and back at the officer as he questions the vloggers motives

De Bruyne posted a reactionary video to his Facebook account reviewing his own footage later on Tuesday, claiming its ‘impossible’ to know who was in the wrong.

‘Who’s right and who’s wrong? It’s not in the moment you can make a firm judgement. Emotions are so high, adrenaline, hormones,’ he said.

‘Is this the best way to do to this? Is this getting compliance? Are we really getting there?’

De Bruyne then suggests the officer was ‘short on sleep’ or may have ‘come from a difficult arrest’ and that they were factors in their confrontation.

The footage was shared across social media, with commenters less supportive of his behaviour and theories.

‘I simply could not muster the patience this cop displays,’ one person said.