Hooded anti-lockdown protesters have marched through the streets and clashed with cops who arrested four in Sydney’s south-west in an open revolt against crippling Covid-19 restrictions on Sunday.

And on Monday morning, the fear continued, when locals started a run on banks, with long queues forming outside several banks  in the Chester Hill area as worried residents lined up to withdraw cash as uncertainty grows about the length and severity of the lockdown in the weeks ahead.

Premier Gladys Berejiklian tightened lockdown rules for 810,000 residents in the local government areas of Fairfield, Liverpool, and Canterbury-Bankstown on Saturday due to disproportionately high case numbers of the highly infectious Indian Delta variant in those areas.

On Sunday, 79 of the 105 new cases came from the three locked-down local government areas – but the figures didn’t stop dozens of furious residents from taking to the streets claiming the south-west was ‘unfairly targeted’ by the strengthened rules.

Protesters directed their anger at Ms Berejiklian chanting ‘freedom, freedom’, ‘no to the vaccine’, ‘no more lockdown ‘ and ‘f**k off Gladys’ as they marched through Paul Keating Park about 5pm on Sunday.

Footage uploaded to TikTok showed a series of men hiding their identities behind hoodies with black bandanas over their faces and a woman holding a sign saying: ‘Not every1 is on Centrelink. We need work’ (pictured)

Fiery photos show men, women, and teenagers marching with a megaphone, and mostly without face masks, coming up against police who tried continually to quell the demonstration.

Footage uploaded to TikTok also showed a series of men avoiding the camera while hiding their identity behind hoods and hoodies with black bandanas over their faces as those around them chanted ‘no more lockdown’.

A woman is also seen holding a sign saying: ‘Not every1 is on Centrelink. We need work.’

In one image, cops confronted group members as others crowded around filming the altercation with their phones. 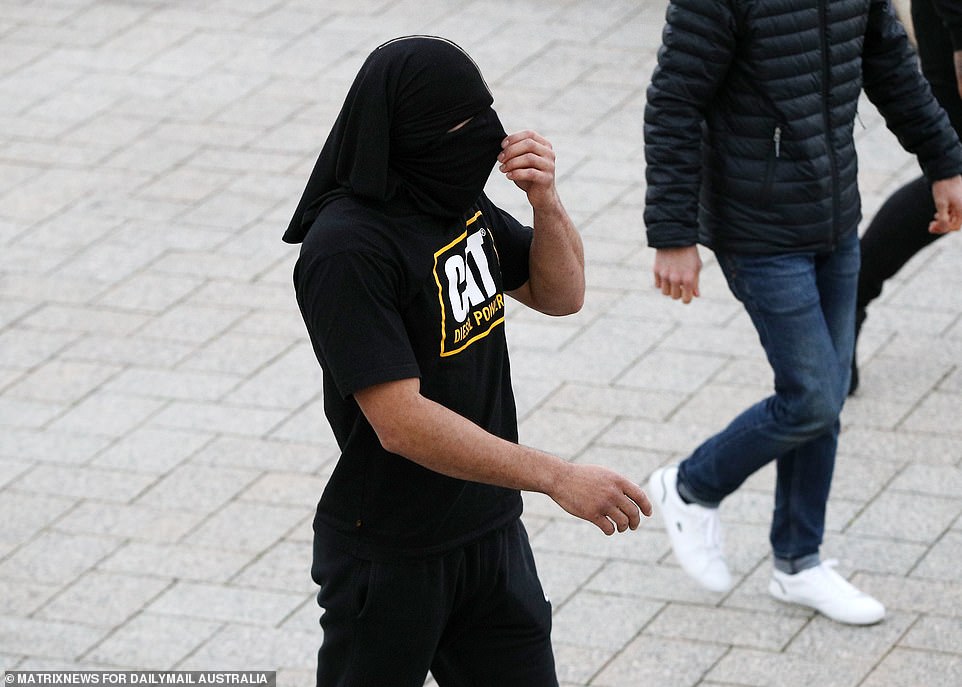 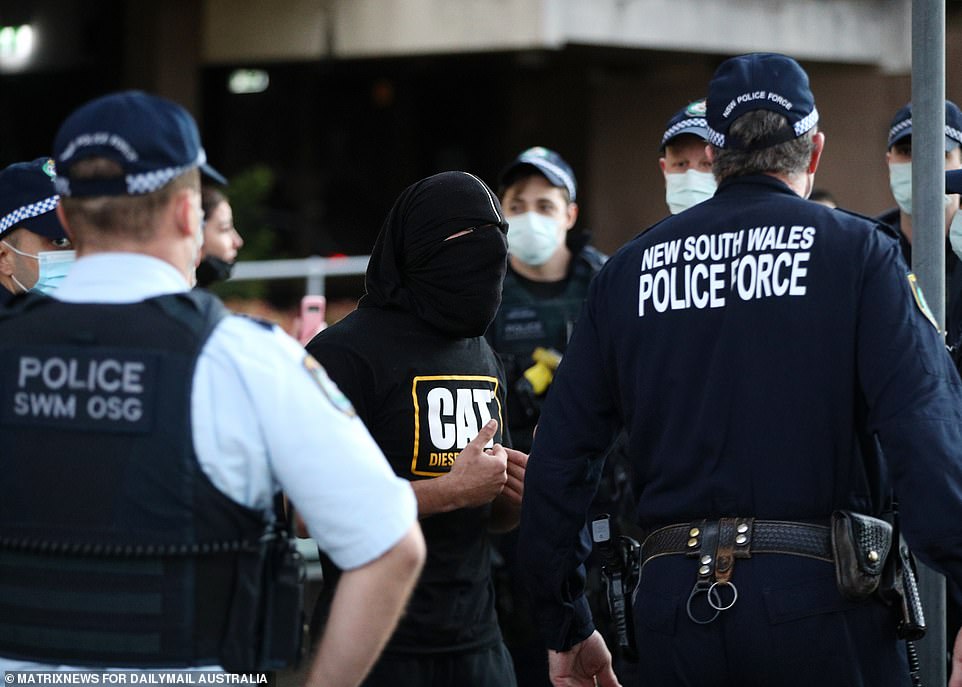 Police arrested four men during Sunday’s Bankstown protest. Pictured here, police talk to a man who’s obscuring his identity with a hood and a bandana over his face 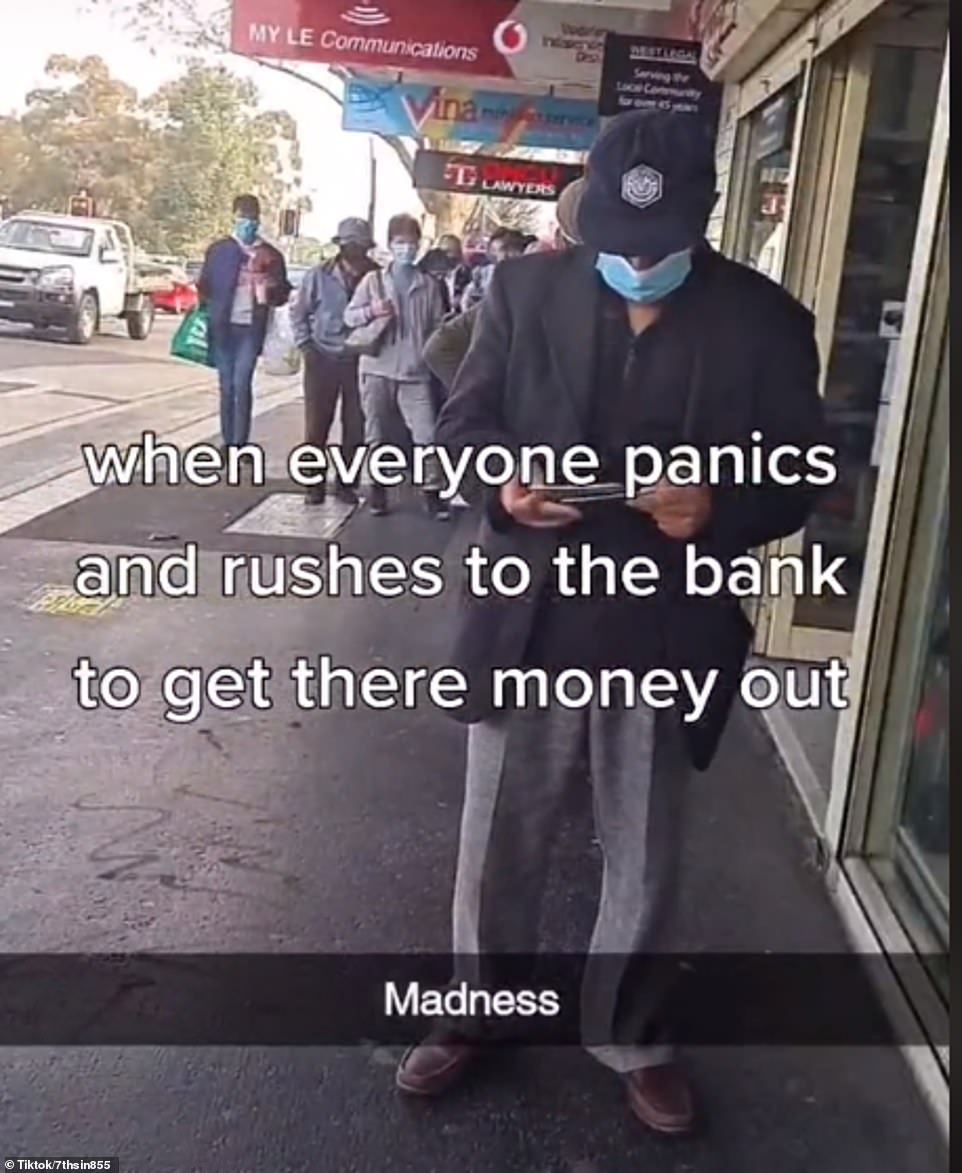 Another showed a small parade of people marching through the park behind chanting men.

‘Everyone’s against everyone, man. It’s f***king disgusting. I had the police asking me to help disperse people. I said we’re here for the right purpose, we’ve got masks on and everything. We’re trying to do our best.’

‘About 40 people gathered at a park when officers attached to South West Metropolitan Operations Support Group who were already at the location attempted to disperse the group,’ it said. 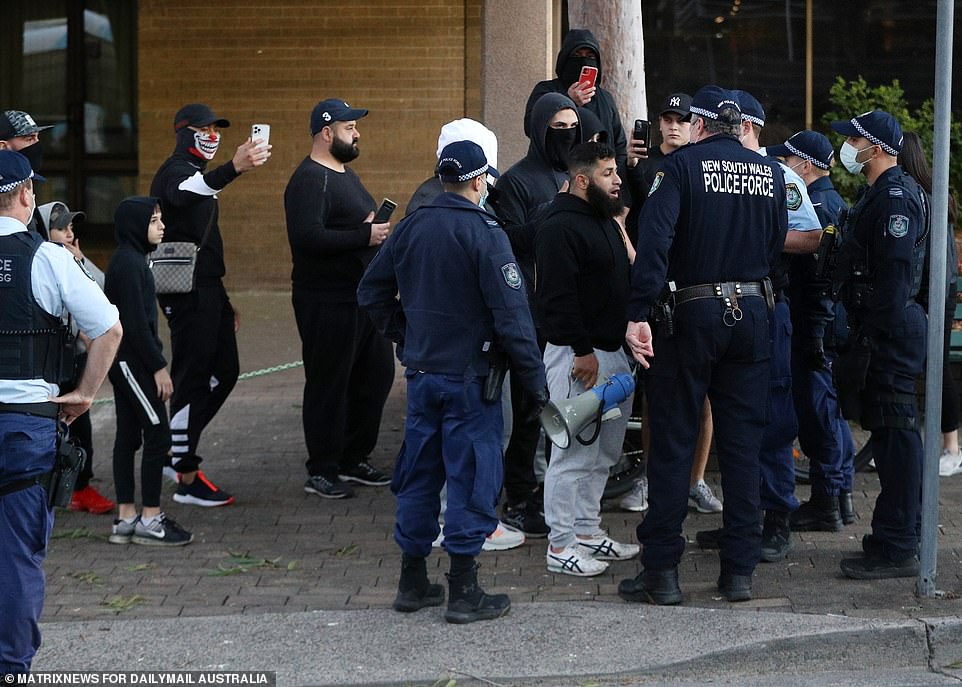 Pictured: Police trying to reason with a protester in Bankstown at an anti-lockdown protest on Sunday afternoon 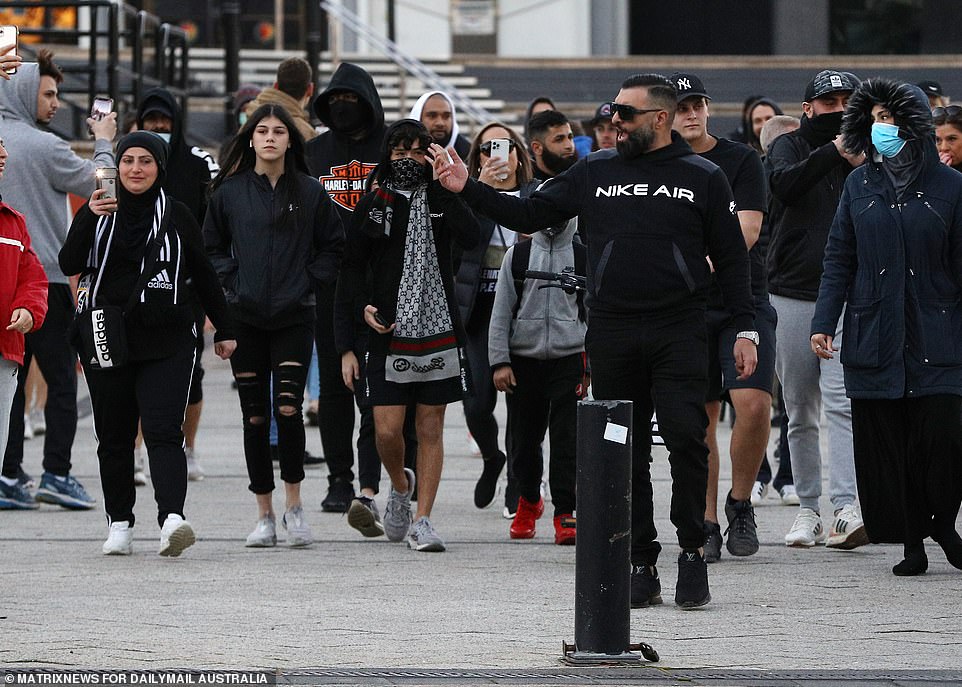 Pictured: A group of demonstrators in Bankstown, in Sydney’s west, marching against lockdown on Sunday afternoon 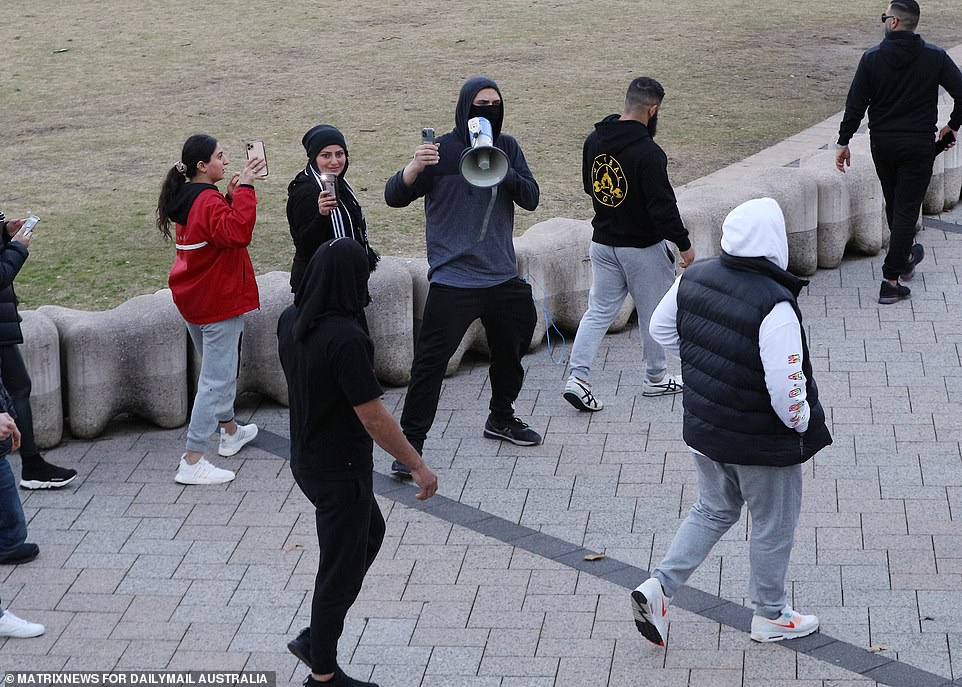 ‘Four men, aged 20, 23, 27, and 32, were arrested and taken to Bankstown Police Station where they are expected to be charged.’

A TikTok video of part of the parade got a mixed reception on social media with some praising those taking part but many ridiculing the reaction so soon into Sydney’s second major lockdown.

‘It’s obvious that you people have been leading the princess life,’ one posted . ‘It’s only been two weeks. Stay home, so we don’t have to be in it for long.’

Others said demonstrations like this were more likely to cause an extension to the lockdown rather than shorten it.

‘All you’re going to get in an extra five weeks,’ one user wrote. The person who shot the video @muzzi agreed. ‘OMG I swear I think that too,’ he posted. 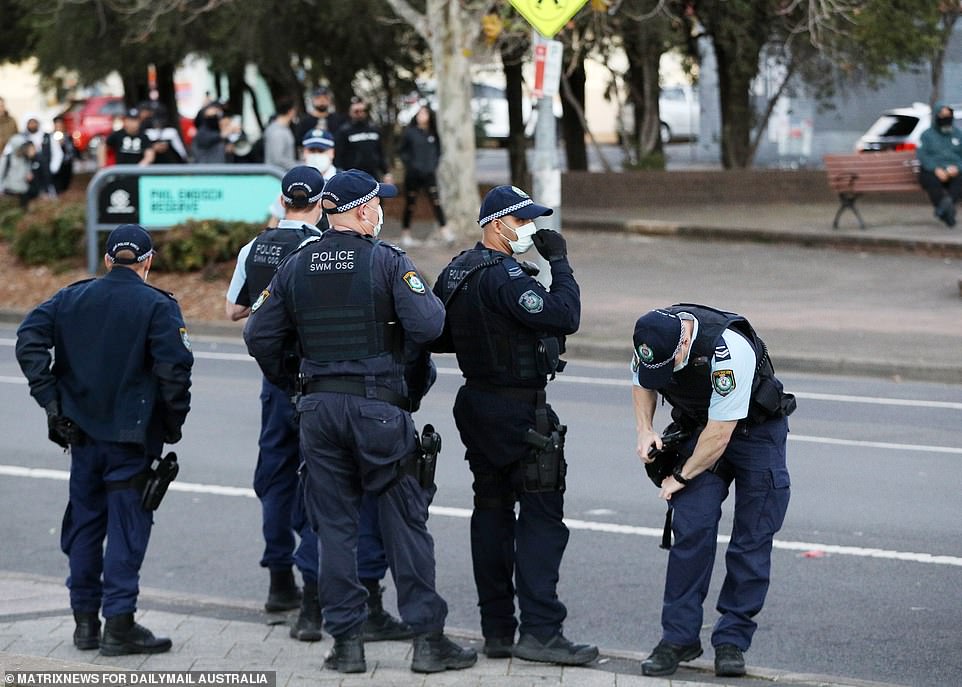 Pictured: Police in face masks watching an anti-lockdown protest in Sydney’s west on Sunday. Demonstrators took to the streets in Bankstown 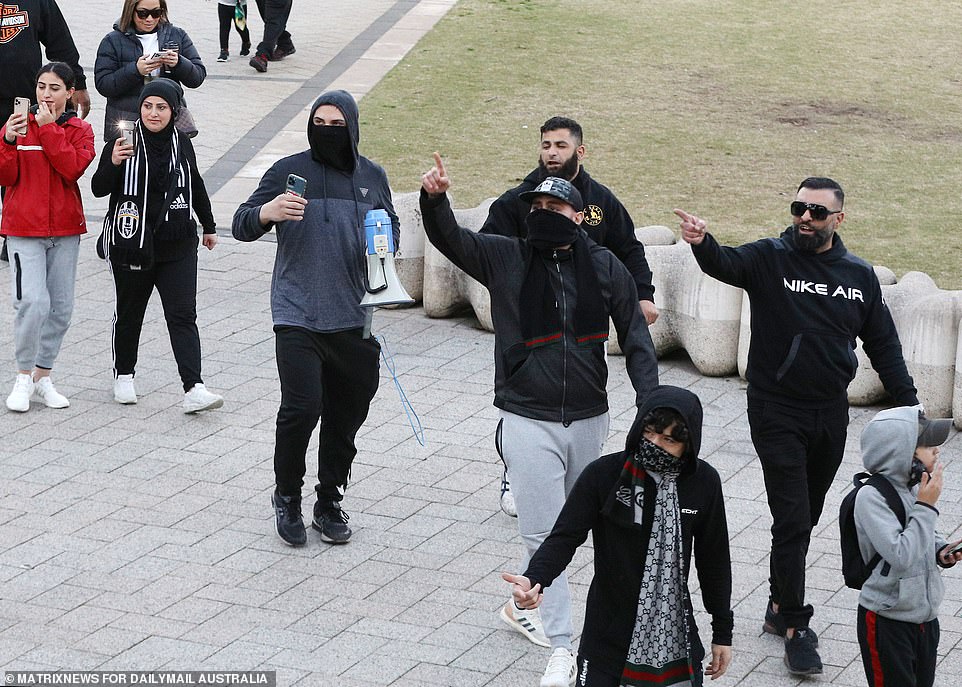 Pictured: Men and women marching in Bankstown on Sunday afternoon, claiming the lockdow in Sydney’s west is ‘unfairly targeted’

The 810,000 people living in those regions were told they cannot leave their suburbs even for work unless they’re employed in healthcare, aged care or emergency services until at least July 30.

Any essential employees who are permitted to leave their suburbs for work are subject to the same restrictions previously in place, including taking a Covid test every three days.

Local leaders have already slammed the police blitz in her area to enforce Covid lockdown restrictions, instead advocating for more health workers.

‘We need the health response rather than the police response,’ Liverpool Mayor Wendy Waller told the Today show.

The mayor said people in her council were mostly complying with Covid restrictions and deploying the army in addition to higher police visibility would be ‘overkill’.

‘[People] are very concerned that we’re being singled out,’ Ms Waller said. ‘We know from previous lockdowns [that people complied].

‘If we got an extra hundred health workers in our local area giving out the vaccines, rather than this, I think we’d get a better outcome.’ 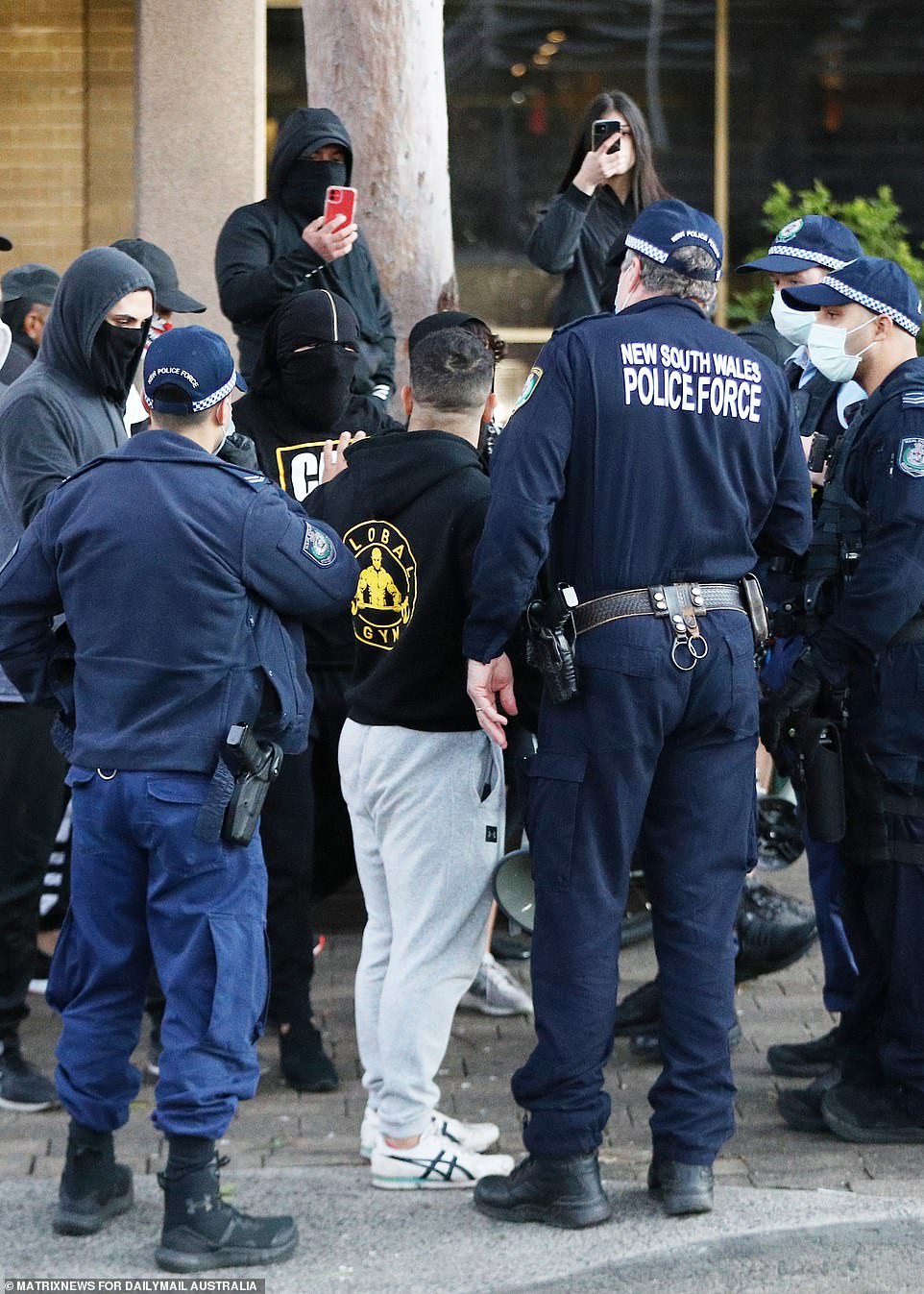 Pictured: A police clash with anti-lockdown protesters at a demonstration in Sydney’s west on Sunday afternoon

An extra 100 police officers patrolled the Liverpool, Fairfield, and Canterbury-Bankstown councils on Friday in a crackdown on people breaching lockdown restrictions.

Officers have urged people to follow stay-at-home directives, and warned that they would fine anyone who breaches the rules up to $1,000.

In total, 240 PINs were issued on Saturday, with 53 of those $200 infringements for failing to wear a fitted face covering.

Another 23 people were charged with failing to comply with Public Health Orders..

On Sunday, Ms Berejiklian said announcing the harsh restrictions on the three councils was ‘the most difficult day’ she’s had in her role as premier. 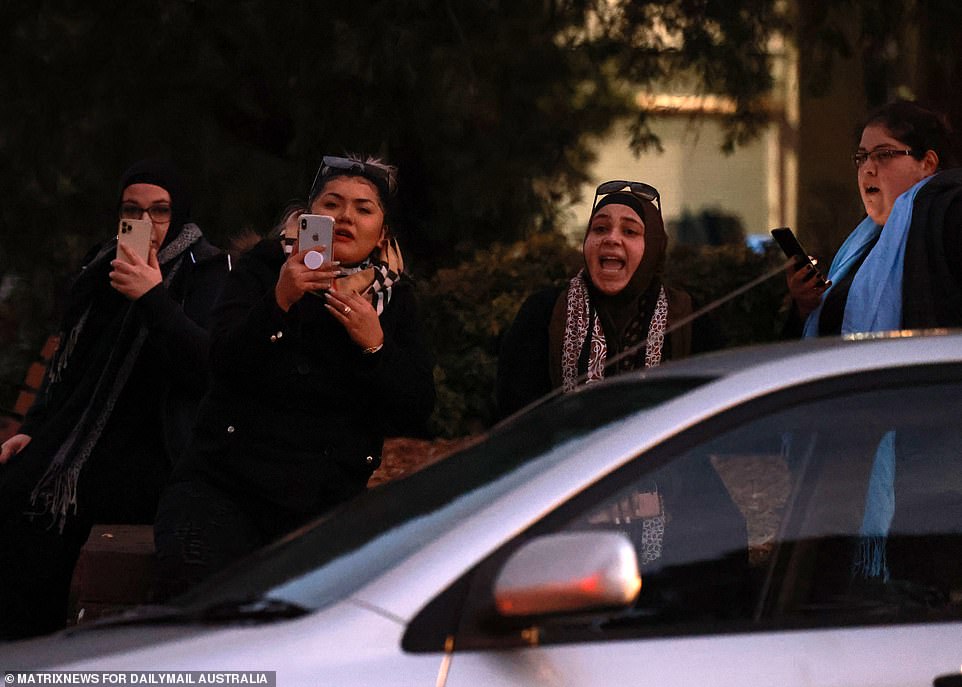 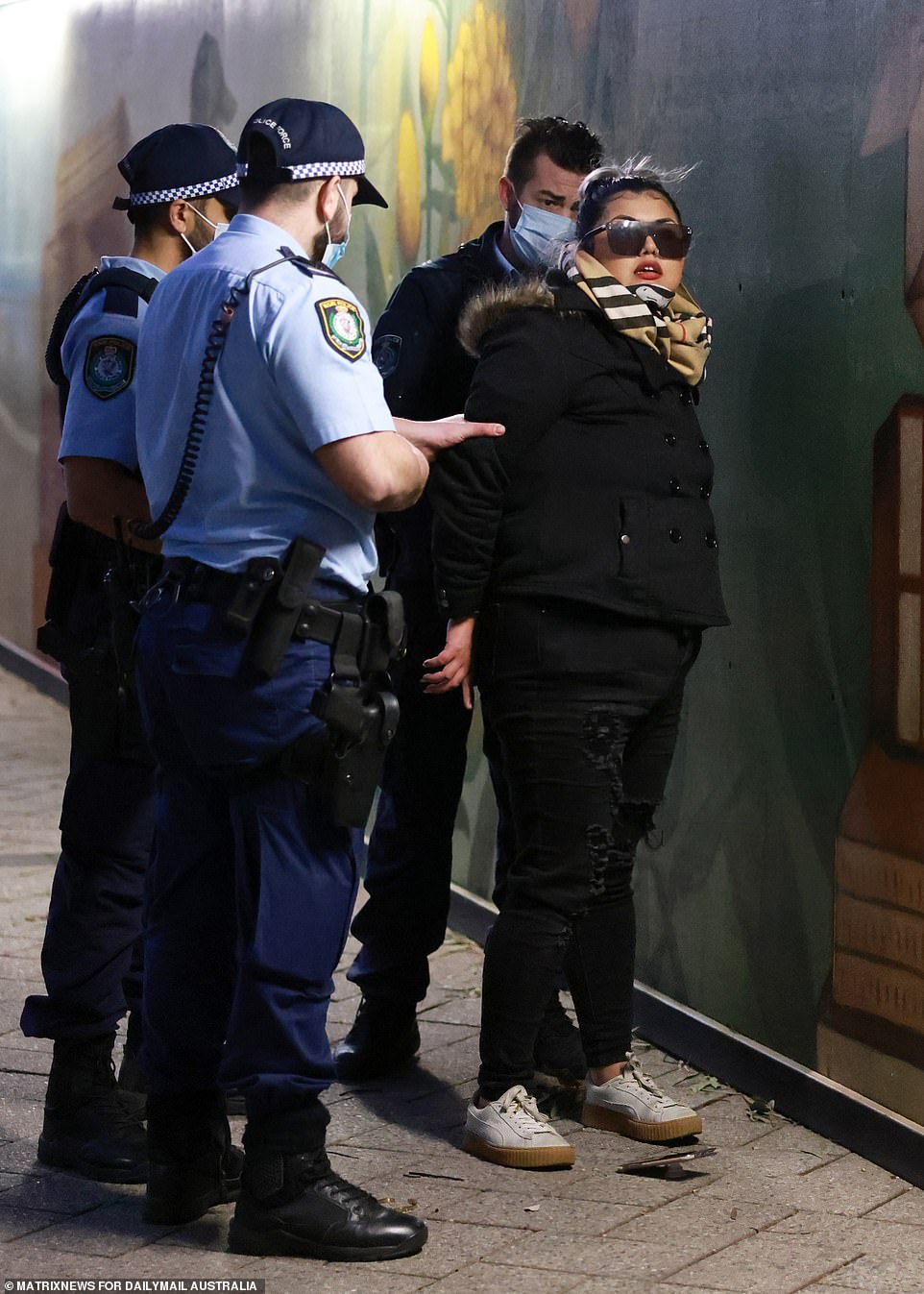 But she felt it was the only way to keep people safe and reduce the risk of transmission after the data proved they’re ‘still not managing to get the curve of transmission to come down’.

‘I can’t remember a time when our state has been challenged to such an extent,’ Ms Berejiklian said.

‘Not a single one of these decisions was taken lightly.’

One Bankstown local said the protesters were furious that already severe lockdown restrictions in the south-west were going to be toughened. 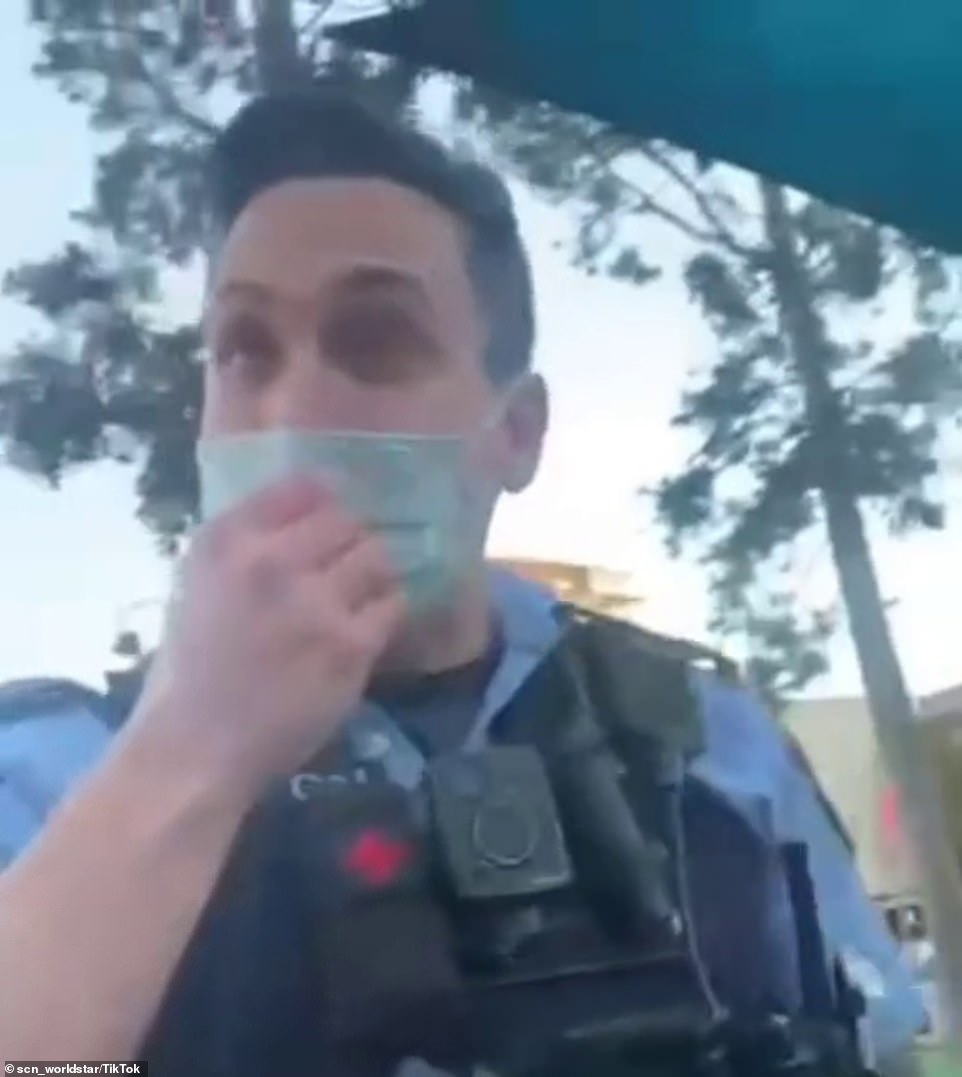 A no-nonsense cop has been praised for the way he handled lockdown protests in Bankstown, empthasing with residents and telling them that he, too, is struggling with government directives 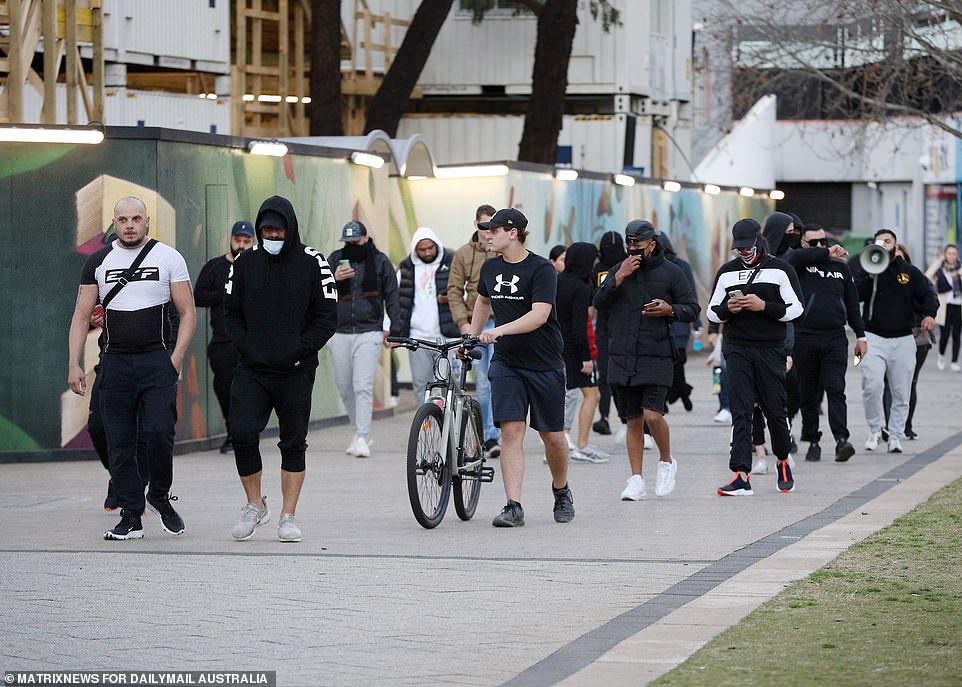 One Bankstown local said the protesters were furious that already severe lockdown restrictions in the southwest were going to be toughened. Pictured: People during the protest

He said those in Sydney’s southwest felt they were being unfairly targeted by the government.

Footage also emerged showing a police officer saying he was also ‘sick of lockdown’ but pleaded with attendees to abide by the rules.

‘We are sick of this lockdown rubbish. But this rubbish here [the protests] doesn’t help,’ the cop said.

He warned that the likely outcome of protesting would be increased public scrutiny and a deployment of even more police officers to contain crowds and civil unrest in the coming days.

‘The government has put in rules that we have to enforce… we’re as over it as you are,’ he continued.

‘I understand your frustrations, I’ve got family that are struggling as well. It’s rubbish.’

SYDNEY’S LOCKDOWN: WHAT YOU NEED TO KNOW UNTIL JULY 30

Masks are mandatory in all indoor settings outside the home, including offices and apartment buildings

Residents can travel only 10km from their homes

– Exercise and gather in groups of two while outside

– No browsing in supermarkets and retail businesses. Shop only for essential items

– Funerals are capped at 10, weddings are banned

– No car pooling with other households when going out for exercise

The new rules are in addition to the stay-at-home orders already in place until July 30, which include only leaving the home to:

*exercise or for work or education that cannot be conducted remotely

People in Fairfield, Liverpool or Canterbury in Sydney’s southwest are advised to stay home, unless:

*For work unless it is an essential service, such as health workers. Businesses must give employees the option of working from home.

* Any essential employees who are permitted to leave their suburbs for work are subject to the same restrictions previously in place, namely receiving a negative Covid test every three days.