Dan Andrews has accused the federal government of playing favourites by handing out extra doses of Covid vaccine from the national stockpile to New South Wales.

The fired up state leader took a swipe at his NSW counterpart Gladys Berejiklian, saying jabs have been taken out of the arms of Victorians so that Sydneysiders could ‘go and have picnics’.

Out of the additional one million shots of the Pfizer vaccine which arrived in Australia from Poland earlier this month, 534,000 vials were set aside for 20 to 39-year-olds living in Sydney’s Covid-ravaged hotspots.

‘You can’t ignore the fact NSW has received significant additional support – we don’t begrudge them for that,’ Mr Andrews told reporters on Sunday.

‘But we are now under a set of rules here in Victoria, with case numbers too high to be able to safely open up … that means we have a number of challenges as well.’

Victoria recorded their highest number of cases in a year overnight with 92 new locally-acquired infections.

Adding to the state’s woes is that mystery cases not yet linked to the rest of the outbreak jumped by 31 and health authorities are not yet sure how many were infectious in the community.

Of the latest transmissions, 61 are linked to existing outbreaks with at least 19 of the cases in full isolation during their entire infectious period.

The Premier said it was too early to provide details on when the statewide lockdown will finally be lifted and what restrictions will remain in place. 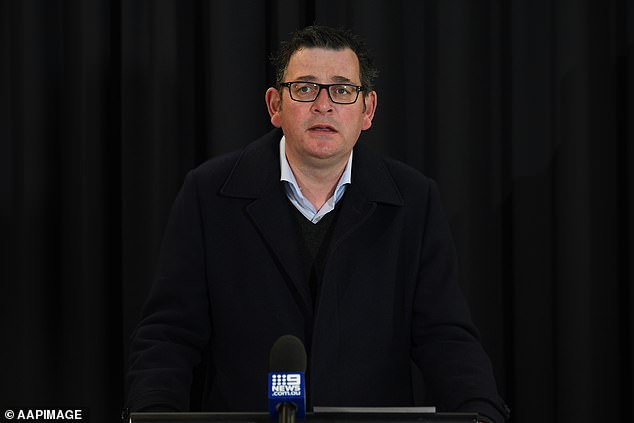 Victorians are being duded when it comes to its coronavirus vaccine supply, according to Dan Andrews (pictured addressing the media on Sunday 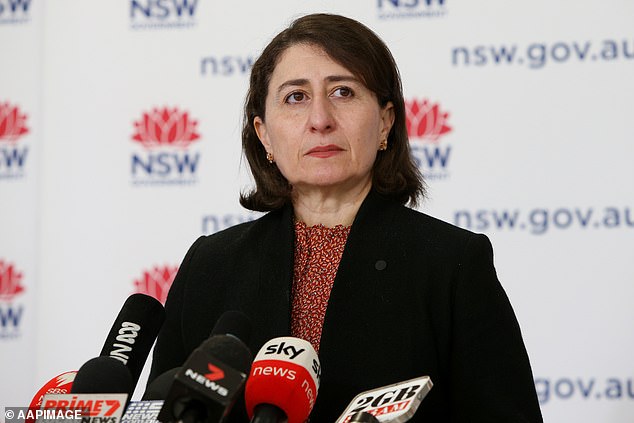 The fired up state leader also took a swipe at his New South Wales counterpart Gladys Berejiklian (pictured), saying jabs have been taken out of the arms of Victorians so that Sydneysiders could ‘go and have picnics’ 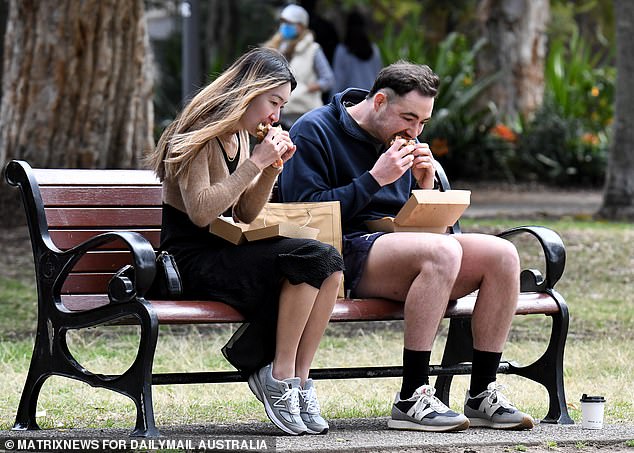 Mr Andrews said now is not the time for NSW to be streaking ahead of the rest of the country on vaccination rates. Pictured: Locked down Sydneysiders are seen at Rushcutters Bay Park

‘It is only fair that we distribute vaccines based on the population and need … but we can’t continue to see hundreds of thousands of extra doses pouring into Sydney at the expense of every other part of our nation,’ Mr Andrews said.

‘There has to be a limit to that and I’m very pleased that the Prime Minister has confirmed that that won’t be the case.’

He said now is not the time for NSW to be streaking ahead of the rest of the country on vaccination rates, outlining that the national plan set out by the Doherty Institute makes it clear all states must ‘move together’. 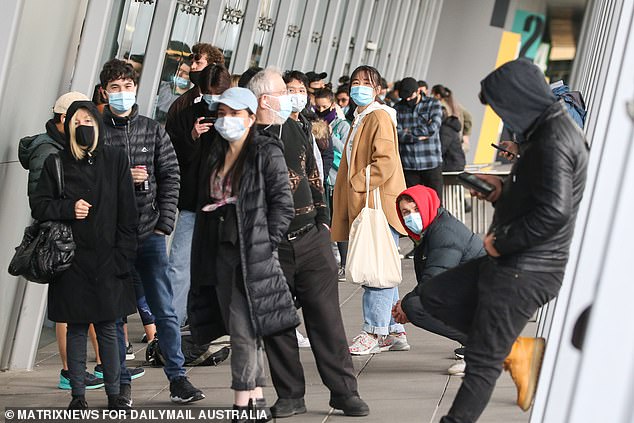 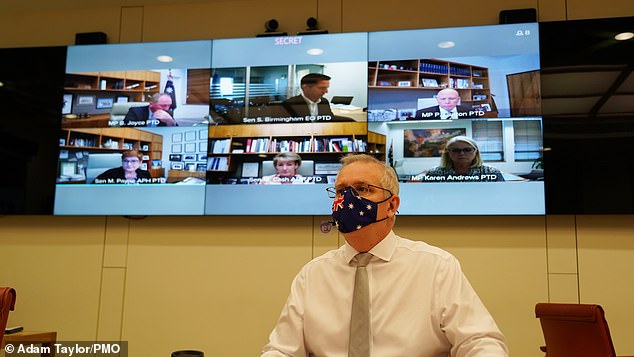 ‘I’m pretty keen that we get our fair share (of vaccine doses) now and I’m sure other state premiers would have a similar view that they’ve (NSW) had extra support,’ Mr Andrews said.

‘Now it’s time to not necessarily have them streaking ahead because the national plan is about all of us moving together.

‘It’s also not a national plan for picnics, just quietly, the notion of giving up vaccines so Victorians could go and have picnics … no that’s not what we are doing.’

Mr Andrews comments come after Premier Berejiklian announced that vaccinated Sydneysiders will soon be able to enjoy picnics in the sun with four other people, as some of the state’s harsh lockdown restrictions are set to be eased on September 13.

NSW recorded a record 1,218 infections on Sunday, the highest daily number ever seen in Australia, as well as six more deaths. 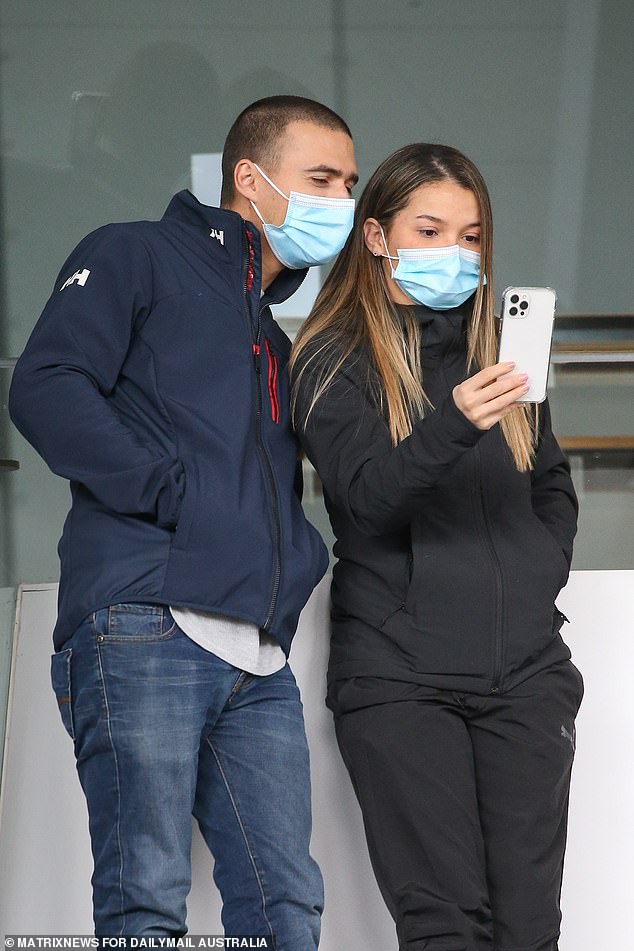 Victoria recorded their highest number of cases in a year overnight with 92 new locally-acquired infections. Pictured: A Melbourne couple queue for a Covid jab on Sunday 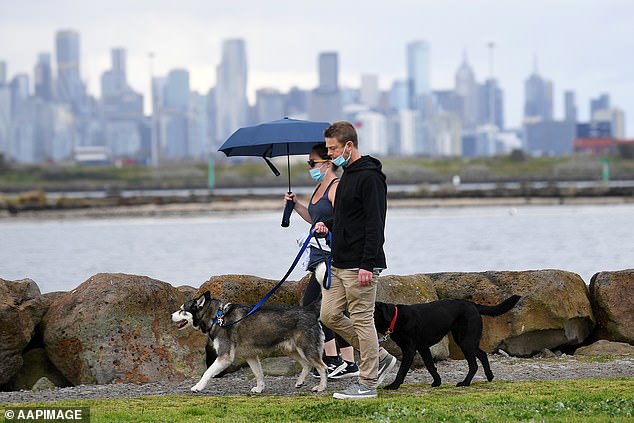 Pictured: People wearing face masks are seen walking their dogs in Melbourne on Sunday as the lockdown was extended

Mr Andrews also made it clear that Victoria will ‘not necessarily’ throw its borders open when the state hits 70 per cent to 80 per cent vaccination if Delta cases continue to surge.

At the Sunday Covid update, a reporter asked Mr Andrews if the border would reopen when Victoria reaches the vaccination targets.

‘Not necessarily,’ the Premier replied, adding that while the national plan could be backed up by modelling it would depend on ‘what was happening at that time’.

Mr Andrews gave the example of coronavirus running rampant through an unvaccinated community and resulting in thousands of hospitalisations.

‘Then we would have to look at that. You can’t just pretend that isn’t happening. That will be the really challenging part. How do you balance opening up, giving people freedom, that will promote infection,’ he said.

‘If you’ve got too few people vaccinated at that point, or too few vulnerable people then you will finish up with many, many people very ill and they will finish up in hospital.’