Daniel Andrews says being $400 out of pocket was nothing compared to the grief he copped from his family for breaching his own Covid-19 rules.

The Victoria Premier was busted not wearing a mask outside Parliament on two consecutive days last week.

Police launched an investigation after footage taken by journalists showed Mr Andrews walking through the car park towards the waiting media scrum after getting out of his car without a mask on Thursday.

An embarrassed Mr Andrews received two $200 fines on Friday, which he paid on the spot – and then copped a lecture from his wife Cath and children Grace, Joseph, and Noah.

‘I received them on Friday and I paid them moments later,’ he told reporters on Sunday.

‘That was one burden for me to shoulder, the grief I got from Cath and the kids was considerably more.’

The Premier insists he was wearing his mask in the car before taking it off on Thursday.

‘I don’t know why I took it off and walked up. I did the wrong thing,’ he admitted

‘It’s important we all follow the rules because the rules are there to keep us safe.

‘Four hundred dollars is $400. I don’t know if you can put a monetary value on it, but I got many thousands of dollars of grief from my teenage children and a little bit from Cath too.’

‘We’ve all got to follow these rules, just for a few more weeks.’ 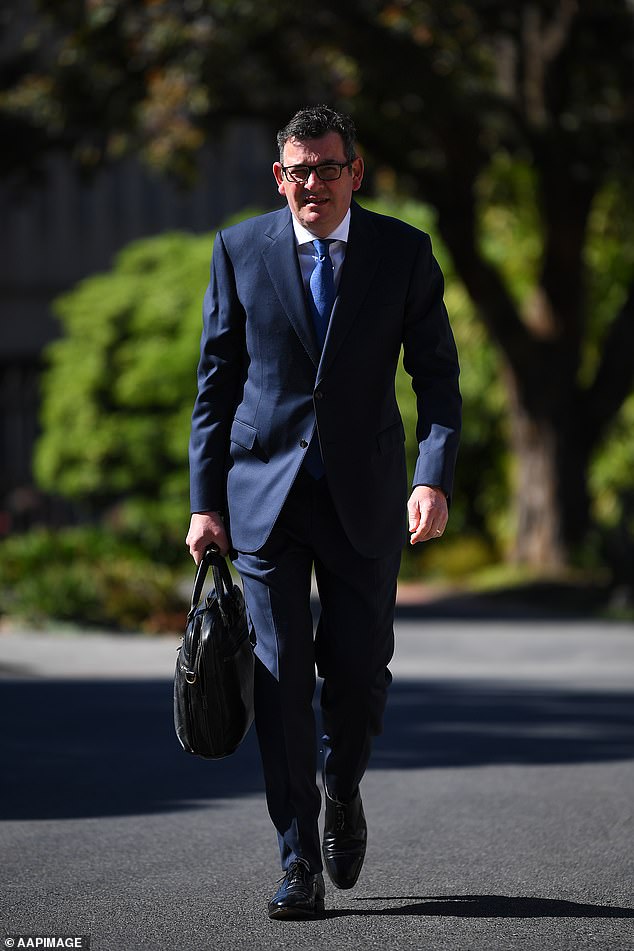 Victoria Premier was busted not wearing a mask outside Parliament on two consecutive days last week. He had since paid the two $200 fines

Mr Andrews then quickly changed the topic by urging Victorians get vaccinated before restrictions are eased in the coming weeks.

He announced on Twitter last week his teenage kids are now fully vaccinated.

‘There are thousands of appointments and they’ll keep you safe,’ Mr Andrews pleaded.

‘There were less than one in 10, and on Sundays, there is less that one in 20 other people in hospital really sick have had two doses so it works.’

‘It is safe, it is effective, and if you get it, you will be keeping yourself safe, that is a good outcome for you and your loved ones, and it will also be making the job of our nurses no harder than it is to be.’

Victoria recorded 1,890 new Covid-19 cases on Sunday, slightly down from a record-breaking 1,965 announced a day earlier.

Video filmed by Seven News journalist Paul Dowsley on Thursday showed Mr Andrews walking up to a microphone stand with his briefcase and passing a small group of media. 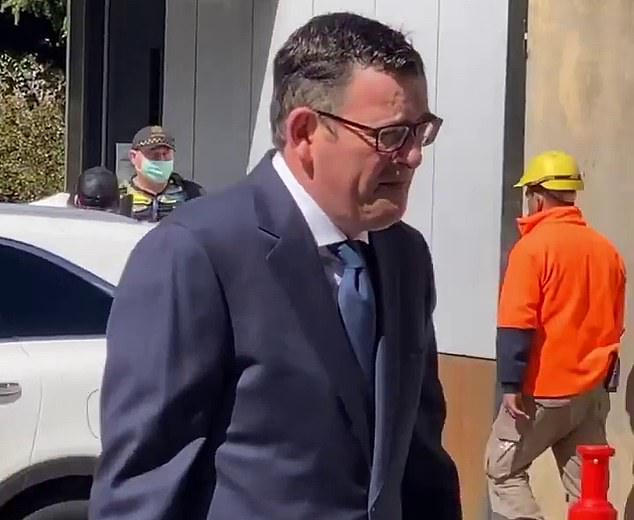 Daniel Andrews was filmed without a face mask while walking across the car park to reporters on Thursday. He’s since been fined $400

The footage sparked outrage with talkback radio hosts and social media users holed up in their sixth lockdown condemning the premier for his missing face-covering.

‘Premier, if you’re going to lock us up for lapses and fine businesses when they’re trying to do the right thing, well you’ve got to pay the price yourself,’ 3AW radio host Neil Mitchell said.

Under the state government’s Covid rules, anyone over 12 is required to mask up whenever they leave their home.

They must wear a mask in all public indoor and outdoor settings. Only those who have a medical exemption are not required to wear the face mask.

Nearly 39,000 fines have been handed out by police to residents breaching Covid-19 health orders between March 2020 and June 2021.

Only $5.7 million of the $60 million worth of fines have been paid.

Individuals face on-the-spot fines of up to $1,817 while businesses can pay as much as $10,904 if they breach public health orders.

Residents risk $5,452 in fines if they break indoor and outdoor gathering caps. 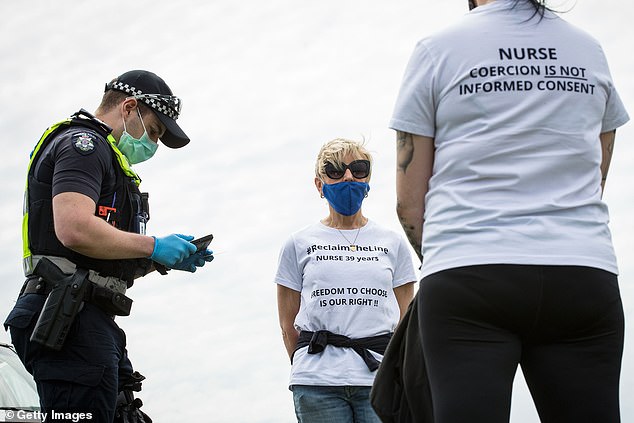