Coronavirus Australia: Expert says Sydney could be released from lockdown as early as October

An expert has offered a glimmer of hope for long suffering Sydneysiders desperate to be freed from lockdown, saying hard restrictions could see cases plummet within months.

New South Wales premier Gladys Berejiklian has given up on her hopes of cases returning to zero as the state recorded 400-plus coronavirus cases for a fourth consecutive day on Tuesday.

Instead, Australia’s roadmap out of the pandemic calls for lockdowns to largely end when 70-80 per cent of the adult population will be vaccinated, based on the Doherty modelling report, along with just 30-40 cases a day.

The Premier this week all but dashed hopes Sydney’s lockdown would end at 70 per cent vaccination without drastically fewer Covid cases.

While epidemiologist Professor Tony Blakely has higher hopes for Melbourne and the ACT in terms of declining infections, he believes NSW can significantly drop to as few as 30 cases a day by mid-October under a ‘hard lockdown’ of tough restrictions.

Cases in NSW could plummet to 30 a day by October under a ‘hard lockdown’ (pictured, Bondi beachgoers enjoying the winter sunshine on Tuesday)

‘It will take until about mid-October under really hard lockdown under modelling we are releasing tomorrow, or February under a soft lockdown,’ Professor Blakely told The Project on Tuesday night.

‘So it will take a long time to get those case numbers down to that level. So this is really challenging stuff. It is more about a bridge over towards October, November, when the vaccination coverages get up and seeing how we go at that point. It is challenging.’

He had difficulty describing the current state of Sydney’s 53-day lockdown when asked if it was a ‘soft’ lockdown unlikely to decrease cases.

‘I don’t know what they are in, to be honest,’ he conceded.

‘A hard lockdown would take until October to get to about five cases a day. 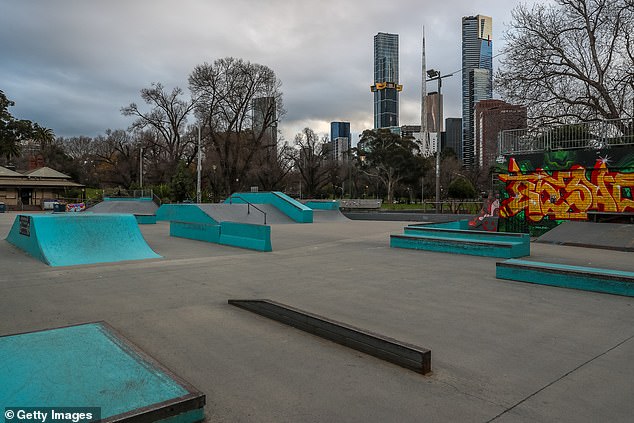 Melbourne is suffering an even harsher lockdown including a 9pm-5am curfew (pictured, closed parks in the city on Tuesday) 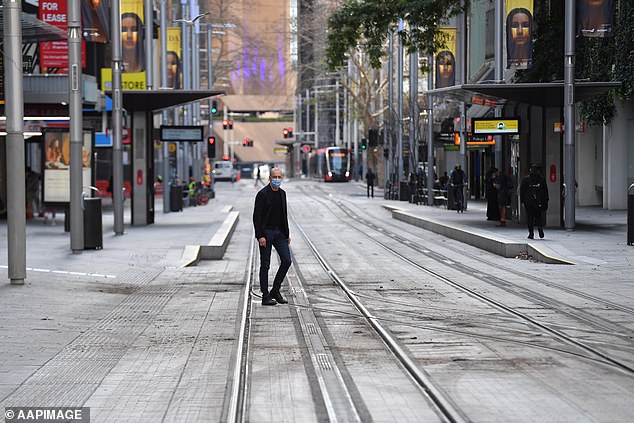 Infections won’t significantly drop in NSW for another six months under a ‘soft’ lockdown. Pictured is a deserted George Street in Sydney’s CBD

‘Everybody in NSW now knows they are living with Covid, so the trick now is as the rates go up and they plateau, what you want is to hold that and minimise mortality, and have a somewhat pleasant life with the lockdowns and the economic impact of that.’

He said NSW’s biggest challenge now is ensuring cases don’t break the 500 mark under the tough new restrictions ramped up this week.

Professor Blakely was more hopeful about Victoria, where Melburnians will remain in their sixth lockdown until at least September 2.

He gave his home state’s chances of returning to zero cases as ‘better than 50/50’ after Premier Daniel Andrews ramped up restrictions on Monday.

But he believes Victoria will eventually live with Covid similar to NSW.

‘From the Victorian perspective, I think it is one last shove,’ Professor Blakely said. 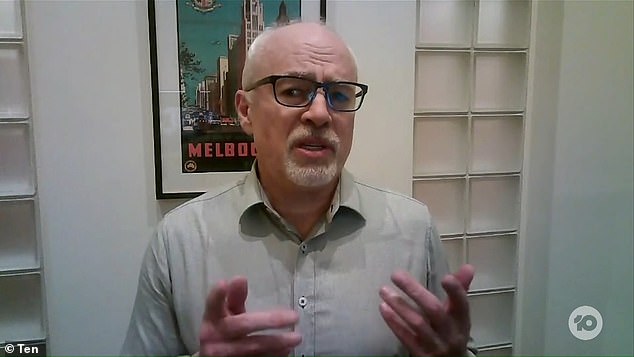 ‘There is a lot of fatigue out there with lockdown at the moment, myself included.

‘We were not achieving it before. We were seeing the numbers static at five mystery cases per day and eight or 10 infectious cases in the community so something more had to happen.

‘These measures will hopefully be enough just to tip it in our favour and will drive it down to zero.’

The ACT has had its seven day lockdown extended by another two weeks after 17 new cases on Tuesday.

Professor Blakely said it will be touch and go as to whether the nation’s capital can get infections under control.

He suggested they should, but added it wasn’t a guarantee.

‘They’ve got – they have not had it before, so they are all fresh, they should be enthusiastic about their lockdown, at least more than we are and they should give it a good nudge,’ he said.

‘They are surrounded by NSW. So, they must feel somewhat enclosed, if you like.’ 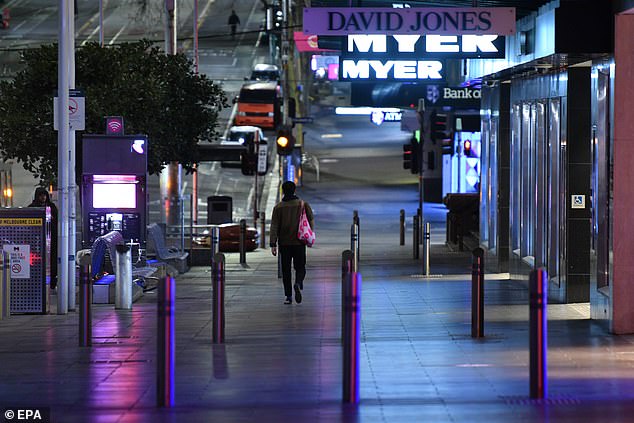 Professor Blakely described Victoria’s  chances of returning to zero cases as ‘better than 50/50’. Pictured is Melbourne’s Bourke Street on Monday as lockdown was extended 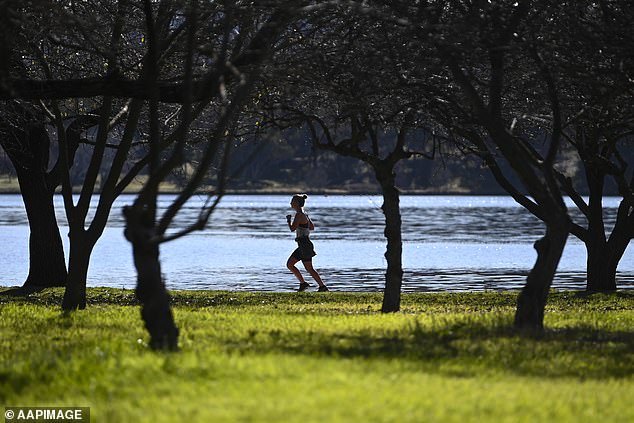 ACT’s lockdown has also been extended after 17 new cases on Tuesday. Pictured is a resident exercising along Canberra’s Lake Burley Griffin

His comments after the NSW Premier announced another 452 Covid cases on Tuesday, where she again broke ranks with the National Cabinet agreement over an end to lockdowns when vaccination rates reach 80 per cent.

‘Because even countries around the world with 80 per cent double-dose vaccination still rely on QR codes, mask wearing in certain settings,’ Ms Berejiklian said.

‘We know that whilst the Delta variant in particular is very active around the world, there will always be a level of protection we need to have.

‘I am not about to make any decision… which is going to either impact our case numbers or risk life.’

A day earlier, Ms Berejiklian confirmed Sydneysiders’ worst fears that she intended to keep restrictions well into 2022 to avoid outbreaks. 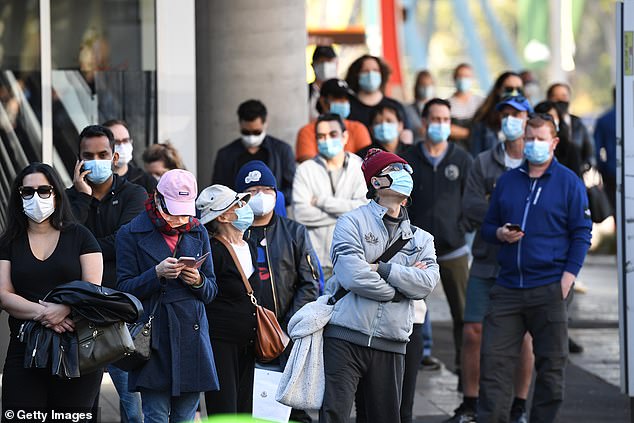 The NSW Premier this week all but dashed hopes Sydney’s lockdown would end at 70 per cent vaccination without drastically fewer Covid cases. Pictured are Sydneysiders queueing at the Sydney Olympic Pak vaccination hub on Tuesday

‘We will need to live with restrictions so long as Delta is around… even if we had zero cases and we were at 80 per cent double dose, you would still have to respect rules that exist… around social distancing, around mask-wearing,’ she said on Monday.

‘So long as Delta and deadly Covid is around, we will always need to live with a measure of restriction.’

The premier has also all but dashed hopes Sydney’s lockdown, now in its 53rd day, would end at 70 per cent vaccination without drastically fewer Covid cases.

She said the Doherty report, on which the path out of the pandemic is based, linked 30 to 40 cases a day to that milestone.

‘You can live life more freely than what you are today, but the extent of your freedom depends on case numbers,’ she said. 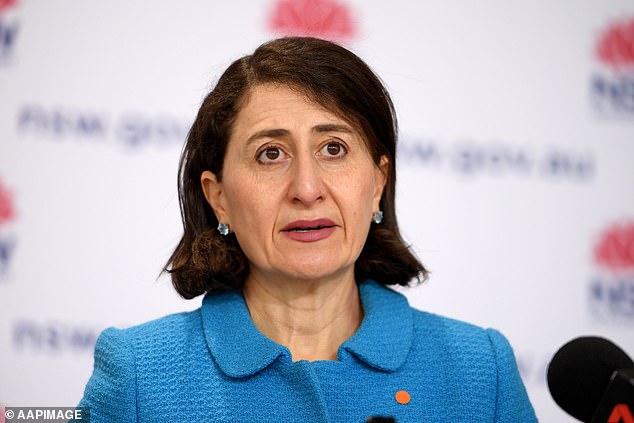