‘No jab, no car’: Furious anti-vaxxer calls out Toyota dealership after learning he can’t buy a vehicle unless he’s vaccinated against Covid – but doesn’t get much support

A furious anti-vaxxer launched an expletive-laden rant at a car dealership after being told he couldn’t enter without proof of a Covid vaccination.

Benjamin Johnson took to TikTok claiming a Toyota dealership on Sydney’s northern beaches wouldn’t allow him to buy a car because he wasn’t vaccinated.

‘Here we are. Toyota on the Northern Beaches. Bill Buckle Toyota, Brookvale,’ Mr Johnson said in the clip while standing outside the dealership.

‘You cannot buy a car from Toyota if you’re unjabbed. F***ing idiots!

Anti-vaxxer Benjamin Johnson blasted a Sydney Toyota dealership for not selling him a car – but did he read the company’s Covid-19 policy?

Johnson received mixed support to his TikTok, where he regularly posts videos in opposition of mandatory vaccination.

But his reception was much cooler on Facebook, where his clip was posted to a western Sydney community group.

‘Of course you can’t buy a car when unvaccinated. The dealer needs to safeguard both their staff and customers from Covid infection,’ one person wrote.

‘It’s Bulls***. The guy’s making a scene for attention. I bought a car, no problem, picked it up without going in, no problem,’ added another.

‘May I suggest get the jab and conform and tone the language down, you are coming across as a complete fool.’

But several fellow anti-vaxxers were firmly on his side. ‘Great job, well done champ,’ one wrote. 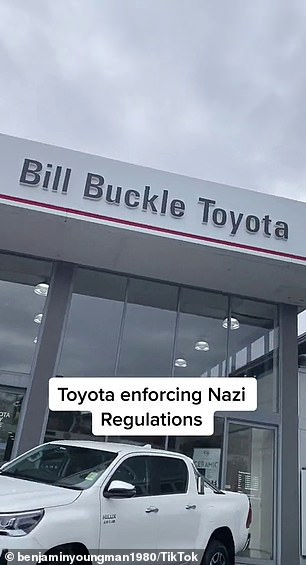 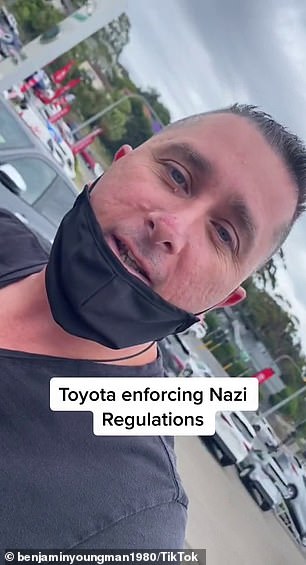 Anti-vaxxer Benjamin Johnson claimed the Sydney car dealership was enforcing Nazi laws in his angry TikTok video. He launched an expletive-laden rant at the dealership. But according to its website it has contactless sales options

The angry Sydneysider may not have checked the dealership’s Covid-19 update, which states that its face-to-face operations are open for ‘fully vaccinated customers as per the NSW Health guidelines’.

The dealership does appear to give unvaccinated customers other options for buying a car.

‘Contactless click and collect will continue to be available for all customers including virtual inspections, online stock search and deposit payment and contactless finance and delivery,’ its website says.

Toyota confirmed it does not have a policy about sales and vaccination.

‘Our Dealers are complying with Public Health Orders about entry to premises,’ the company said in a statement to Daily Mail Australia.

‘This does not mean customers cannot buy a vehicle … click and collect and contactless options are available to support all of our valued customers.’