Sydney’s lockdown could extend for another two months if Covid infection rates don’t start to fall this week, one expert predicts, as religious leaders urge 250,000 Muslim worshippers in the city’s virus-ravaged south-west to stay home during Eid celebrations starting on Monday.

The state-wide lockdown crippling Victoria, initially expected to last just five days, is also to be extended until at least the end of the week amid fears of several super-spreader events.

New South Wales recorded 105 new infections on Sunday as Sydney and surrounding regions entered their fourth week of what was supposed to be a snap two-week lockdown – originally set to end on July 9.

People in Greater Sydney, Wollongong, the Central Coast and the Blue Mountains are banned from doing anything other than exercising outside with one other person, buying groceries, doing essential work or visiting the doctor under rules that were extended until July 30.

That date has not officially changed, but experts who have looked at the consistent numbers of infected people moving in the community and predicted stay-home orders will extend well beyond this date.

The state-wide lockdown crippling Victoria, initially expected to last just five days, is also to be extended (pictured, locked down Melburnians on Sunday) 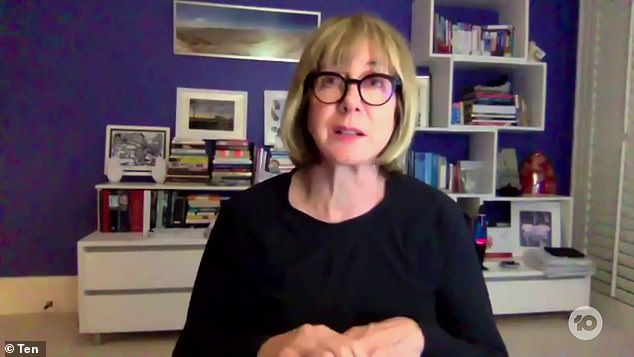 Senior ministers in Victoria are yet to decide exactly how long lockdown will be extended for, The Herald Sun reported, but it would be at least Friday before restrictions ease.

Next Wednesday, July 28, is also being considered, with the state’s fifth lockdown since the pandemic began originally scheduled to end at 11.59pm on Tuesday.

But with 18 new cases reported on Sunday, officials are said to be concerned about potential ‘super-spreading events’ at the MCG, at a Euro 2020 final party and at the Wallabies game against France at AAMI.

All those venues were unknowingly visited by people with Covid, after infected removalists transported the virus from Sydney to a Melbourne apartment block – from where it has spread like wild fire. 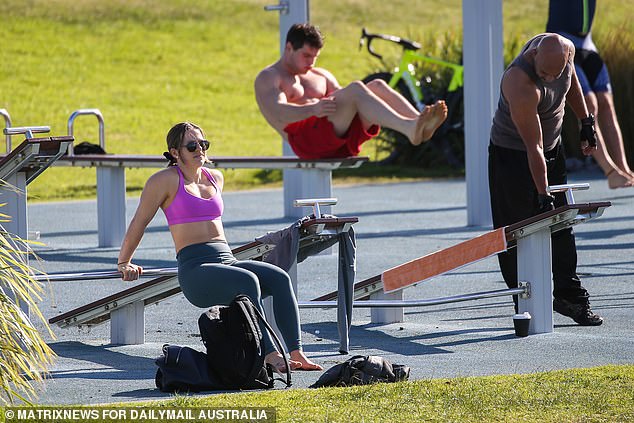 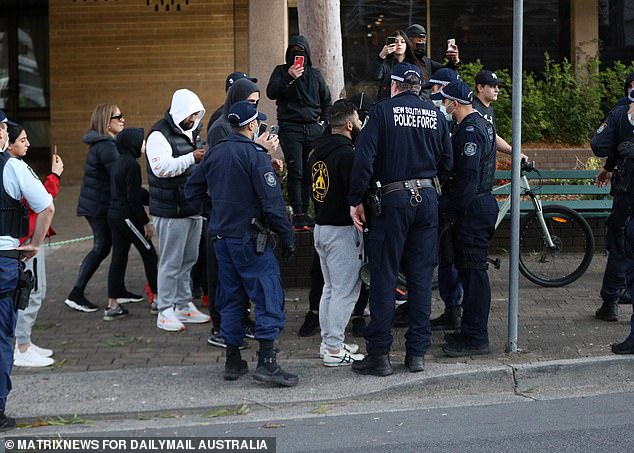 In Sydney, tightening restrictions in the city’s south-west prompted protests over the weekend (pictured in Bankstown on Sunday)

Melburnians are hopefully the situation won’t become as dire as Sydney’s.

On Sunday evening, scientist Mary-Louise McLaws told The Project that Sydneysiders could face up to eight more weeks of restrictions to quell the outbreak, which has since spread to Victoria and Queensland.

Dr McLaws explained that while the number of infected cases active in the community had plateaued rather than jumping drastically between one day and the next, the number needs to fall to zero and stay there for at least 28 days before before lockdown can end.

‘Expect another two months before we’ve absolutely eradicated it,’ she told the program.

‘We still need another three or four weeks [of lockdown] because we need to get that proportion to zero.

‘Once we get that to zero, we need that to continue for 14 days to ensure we’ve mitigated everything.’

After that initial period, Dr McLaws said there would need to be another 28 days of restrictions to ensure anyone who tested positive had been in lockdown the entire time.

Such a lengthy restriction would devastate the already crippled small business industry, and further inflame frustration in the community, which had been seen in regular rallies against the lockdown. 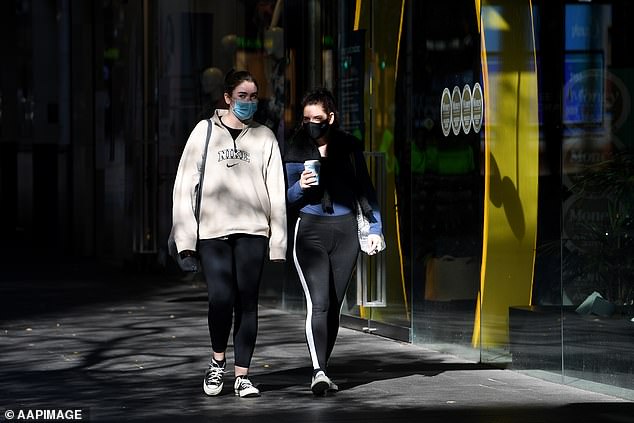 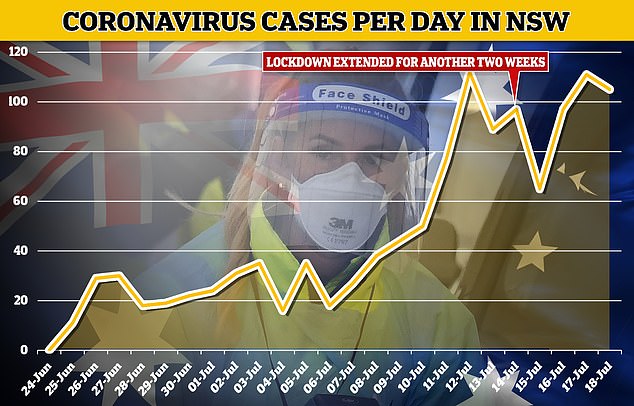 New South Wales’ Covid cases have crept up consistently since the outbreak began, albeit with one or two dips last week. Gladys Berejiklian expects numbers to keep climbing 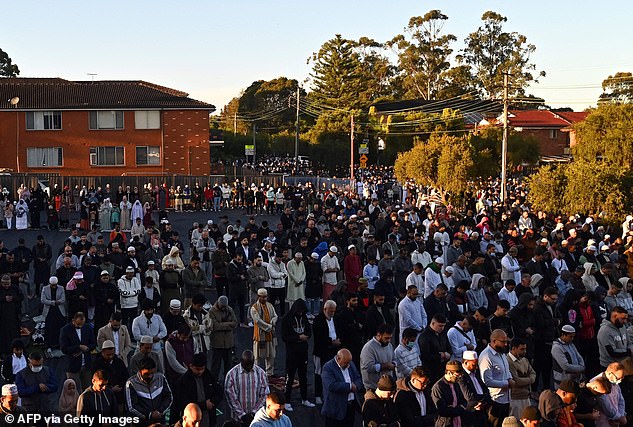 Worshippers take to the street to participate in Eid al-Fitr prayers at the Lakemba Mosque in Sydney on May 13 (pictured). Similar celebrations will have to be done from home this month 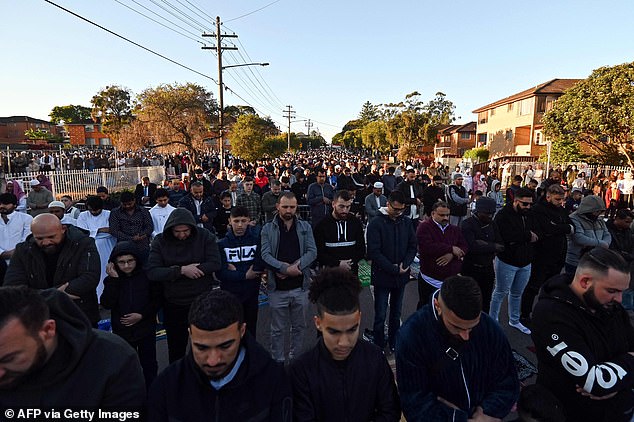 Eid al-Adha is a holiday for Muslims around the world and marks the end of Kajj – the annual pilgrimage to Mecca (pictured, worshippers at the end of Ramadan on May 13)

In total, NSW has recorded 6,833 Covid cases across the entire 18 months the virus has been a threat, including those acquired overseas.

But 1,242 of those cases were recorded in just four short weeks since the current cluster was first reported on June 16.

Number of days in lockdown: 23

Of Sunday’s 105 new cases, 79 came from the three local government areas – prompting Premier Gladys Berejiklian to force community members to stay home unless they are buying groceries or work in an essential service.

The tightened regulations forced Lakemba Labor MP, a devout Muslim, Jihad Dib, to urge about 250,000 people across Sydney not to celebrate Eid with their extended families – as tradition normally prompts.

Eid al-Adha is a holiday for Muslims around the world and marks the end of Kajj – the annual pilgrimage to Mecca.

It is usually a large event celebrated with food and prayer among extended families, and pulls thousands of people to festivities country’s largest mosque in Lakemba – which is so popular that whole streets are closed for the occasion.

This year, everyone will be confined to their own homes.

‘It’s going to be the first Eid in my life I don’t hug and kiss my mum and dad,’ Dib told the ABC.

‘This Eid is an occasion about sacrifice, so we are asking people to sacrifice their social interactions for the greater good, and that way they are actually practising their faith.

‘Our faith teaches us that we’ve got to look after other people… we are putting humankind before ourselves.’

But not everyone in the area is happy about the lockdown – with some claiming communities in the city’s south-west have been targeted.

Local leaders have already slammed the police blitz in her area to enforce Covid lockdown restrictions, instead advocating for more health workers.

‘We need the health response rather than the police response,’ Liverpool Mayor Wendy Waller told the Today show on Sunday. 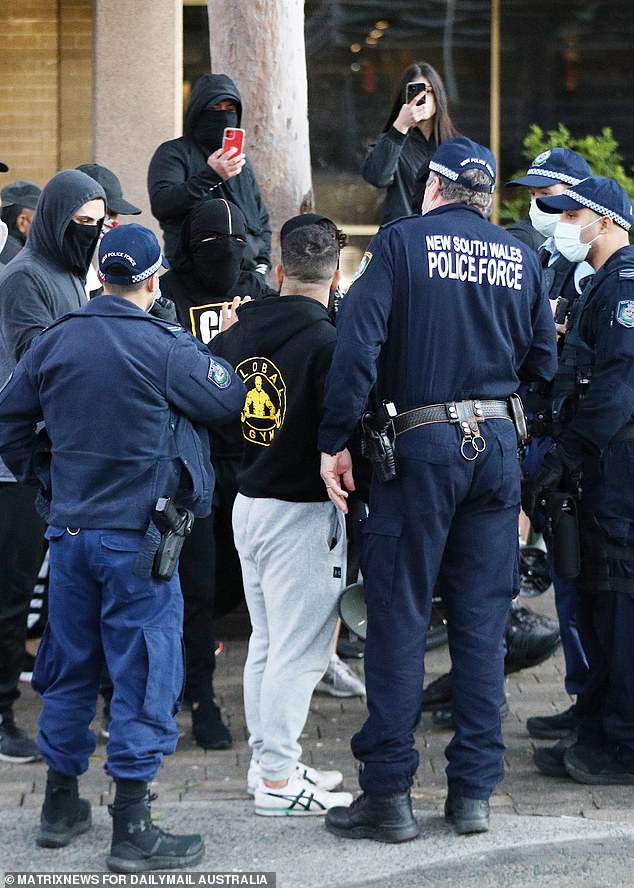 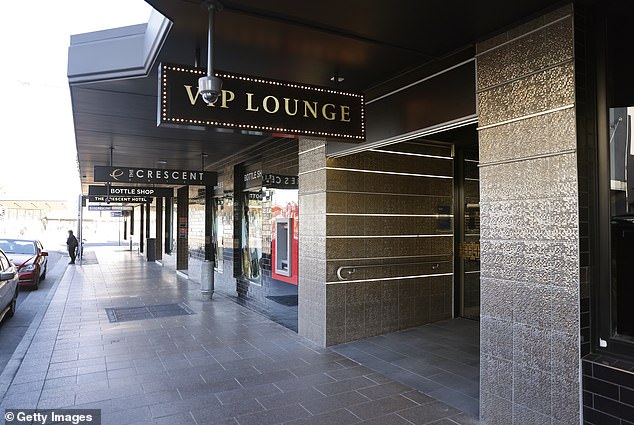 Experts predict lockdown could last for months longer than expected (pictured, an eerily quiet street outside a shut pub in Fairfield on Sunday) 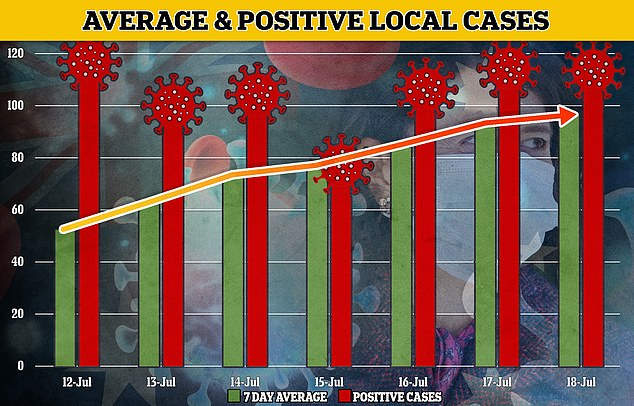 Mildura: Mildura Waves Aquatic and Leisure Centre, Monday July 12 from 11:30am to 4:00pm

Mildura: Caffeine Extraction at Mildura Central Shopping Centre, Tuesday July 13 from 9am to 11am

Tier 2 – Anyone who has visited the following locations during the listed times should urgently get tested, then isolate until confirmation of a negative result. Continue to monitor for symptoms, get tested again if symptoms appear:

Mildura: Mildura Central Shopping Centre, Tuesday July 13 from 9am to 11am

The mayor said people in her council area were mostly complying with Covid restrictions and deploying the army in addition to higher police visibility would be ‘overkill’.

‘[People] are very concerned that we’re being singled out,’ Ms Waller said. ‘We know from previous lockdowns [that people complied].

‘If we got an extra hundred health workers in our local area giving out the vaccines, rather than this, I think we’d get a better outcome.’

An extra 100 police officers patrolled the Liverpool, Fairfield and Canterbury-Bankstown councils on Friday in a crackdown on people breaching lockdown restrictions. 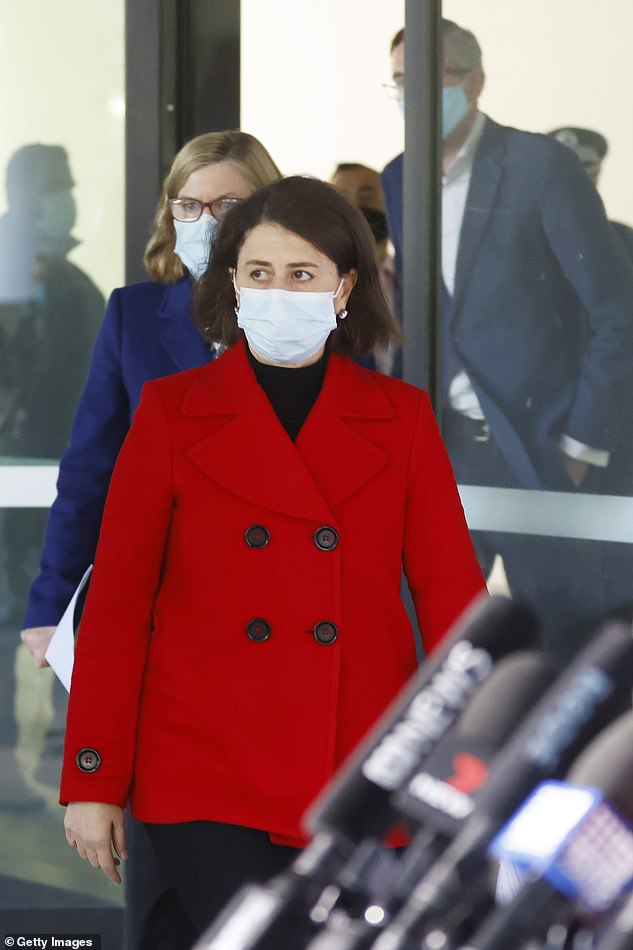 Officers have urged people to follow stay-at-home directives, and warned that they will fine anyone who breaches the rules up to $1000.

In total, 240 infringement notices were issued on Saturday, with 53 of those $200 infringements for failing to wear a fitted face covering.

A further 23 people were charged with failing to comply with Public Health Orders.

On Sunday, Ms Berejiklian revealed that announcing the harsh restrictions on the three councils was ‘the most difficult day’ she’s had in her role as premier.

The 810,000 people living in those regions were initially told they cannot leave their suburbs even for work unless they’re employed in healthcare, aged care or emergency services until at least July 30.

Any essential employees who are permitted to leave their suburbs for work are subject to the same restrictions previously in place, namely receiving a negative Covid test every three days. 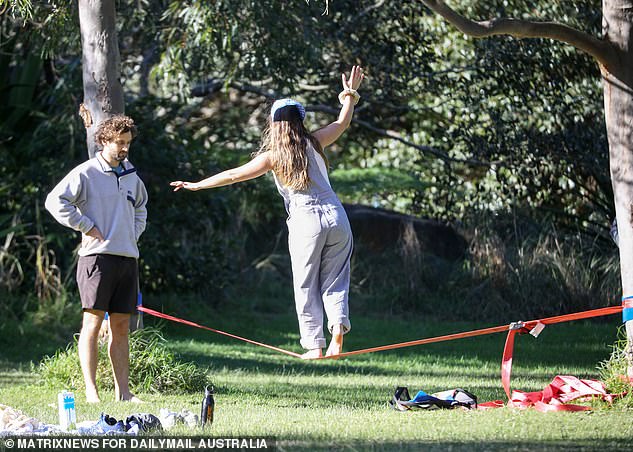 Ms Berejiklian revealed that announcing the harsh restrictions on the three councils was ‘the most difficult day’ she’s had in her role as premier. It contrasts hugely to the fun being had in lockdown in Sydney’s east (pictured on Sunday) 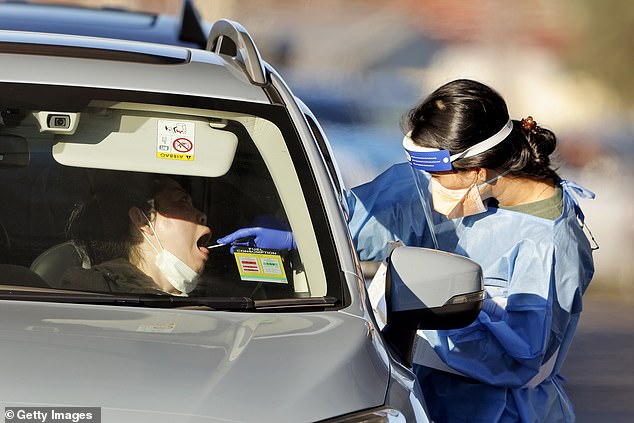 The announcement sparked frenzied calls to authorities and confusion over other industries which have otherwise been deemed essential.

In response, Ms Berejiklian’s team amended the criteria late on Saturday night, extending the parameters to include people working at garden centres, bottle shops and factories.

Delivery drivers, and people who work at supermarkets, newsagents or are required to maintain utilities like gas, electricity, waste management or water are also permitted to leave their locked-down suburbs for work.

In an attempt to ease the financial burden of lockdown on small businesses, Ms Berejiklian also announced a relief package totalling $4billion.

Treasurer Dominic Perrottet said businesses could start applying for the tax-free grants of between $7,500 and $15,000 from Monday.

‘There are a range of initiatives available to help small businesses with cashflow, rent costs, electricity and the like,’ he said.

Meanwhile, Victoria is on tenterhooks waiting to see if new infections pop up in regional areas of the state. 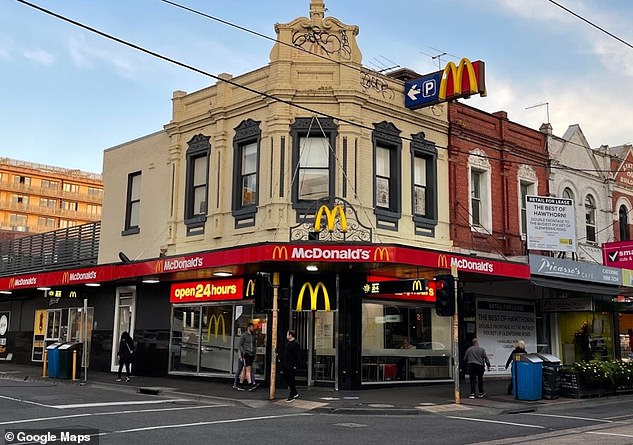 A busy Coles in Richmond has also been exposed to the virus, as well as a Fitness First in Brighton East and a McDonald’s in Hawthorn (pictured)

A busy Coles, Fitness First and McDonald’s were revealed as new Covid exposure sites late on Sunday, with fears an infected case at a popular shopping centre 200km from the city’s CBD may have already spread the virus.

Shoppers who visited the Mildura Central Shopping Centre on July 13 from 9am to 11am have been asked to get tested urgently until they receive a negative result.

The same advice applies to anyone who visited Caffeine Extraction during the same period at the centre or Mildura café Kaffeino on July 12 from 8:30am to 9:30am.

The busy shops and cafes raise fears the virus has already escaped Melbourne and fled into regional areas, which could have been released early from Victoria’s lockdown if infections stayed within the state capital.

A busy Coles in Richmond has also been exposed to the virus, as well as a Fitness First in Brighton East and a McDonald’s in Hawthorn.

SYDNEY’S LOCKDOWN: WHAT YOU NEED TO KNOW UNTIL JULY 30

Masks are mandatory in all indoor settings outside the home, including offices and apartment buildings

Residents can travel only 10km from their homes

– Exercise and gather in groups of two while outside

– No browsing in supermarkets and retail businesses. Shop only for essential items

– Funerals are capped at 10, weddings are banned

– No car pooling with other households when going out for exercise

The new rules are in addition to the stay-at-home orders already in place until July 30, which include only leaving the home to:

*exercise or for work or education that cannot be conducted remotely

People in Fairfield, Liverpool or Canterbury in Sydney’s southwest are advised to stay home, unless:

*For work unless it is an essential service, such as health workers. Businesses must give employees the option of working from home.

* Any essential employees who are permitted to leave their suburbs for work are subject to the same restrictions previously in place, namely receiving a negative Covid test every three days.