Doctors are calling for Stage Four restrictions to be implemented in Victoria which would force nearly all businesses to close and confine more than six million people to their homes.

Victoria’s new infections surged by 532 on Monday to a total of 8,696 – the largest increase since the beginning of the pandemic and the state’s 22nd straight day of triple-digit cases.

Of the 4542 active cases, 400 were healthcare workers, 245 patients were in hospital and 44 were fighting for their lives in intensive care.

Australian Medical Association Victoria President Julian Rait said a Stage Four ‘New Zealand-style lockdown’ would soon be needed to get Victoria’s case numbers down and to avoid hospitals being overwhelmed.

This graph shows how the horror second wave has hit Australia after the country was the envy of the world when it crushed the curve in April. Nearly all cases this month were recorded in Victoria 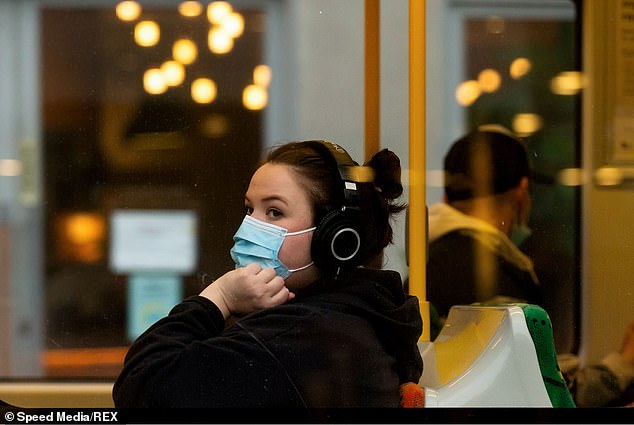 A woman is seen wearing a face mask in Melbourne on Monday. The personal protective equipment is now mandatory in the city

‘What New Zealand did for a month is that they closed pretty much all businesses other than pharmacies, medical clinics, grocery stores, petrol stations and really curtailed a lot of retail shopping and a lot of businesses,’ he told 3AW on Monday.

‘That’s the model that I would look to and clearly they were able to achieve elimination through that with a month of such measures. 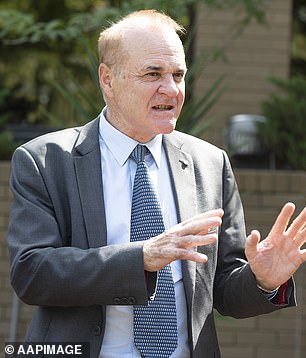 ‘I am not suggesting that is necessarily possible now in Victoria with the number of cases but I would suggest that stronger measures for a shorter period might be a preferable strategy to months and months of what we have got at the moment.’

Professor Rait said the rapid increase in numbers from 66 new cases on July 3 to 288 on July 10, to 428 on July 17 and 532 on Monday meant there was a ‘significant problem’ – with potentially another 2,500 undetected cases in the pipeline.

Meanwhile, young adult Victorians have been identified as the group with the highest infection rate in the state.

Some 1947 men and women aged between 20 and 29 have caught coronavirus in Victoria, the most of any demographic.

Many young people work as casuals and have little if any savings, encouraging them to risk going to work even if they feel slightly off. 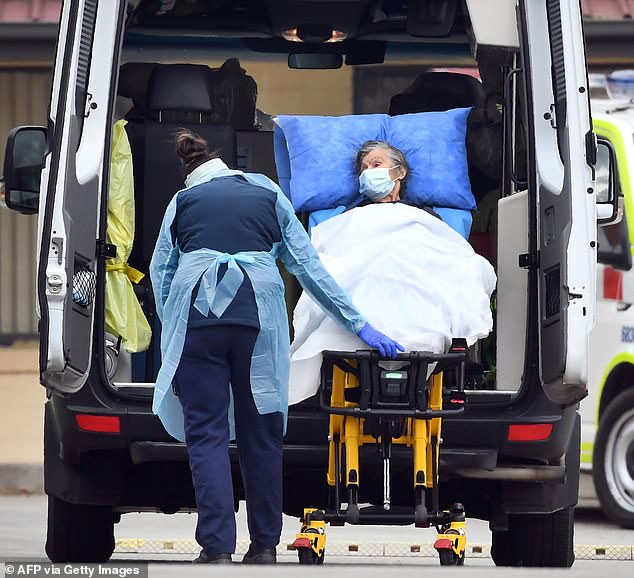 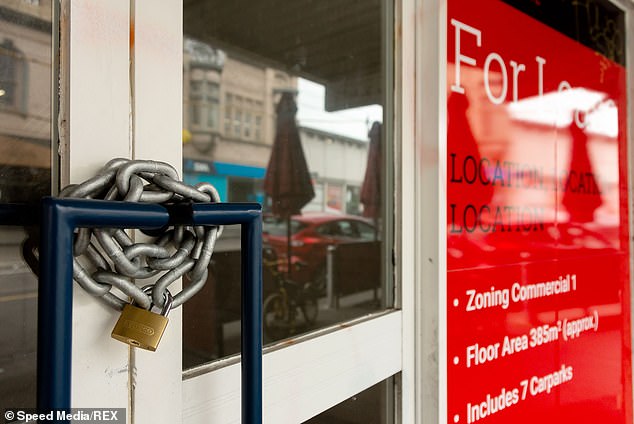 A For Lease sign is seen on Smith Street, Brunswick, as a record number of shops go out of business in Melbourne

‘Young, fit and otherwise healthy people are struggling to breathe.’

‘This is not an older person’s disease. A quarter of infections we are seeing are young people in their 20s,’ she said.

‘People in their 60s only represent six per cent. 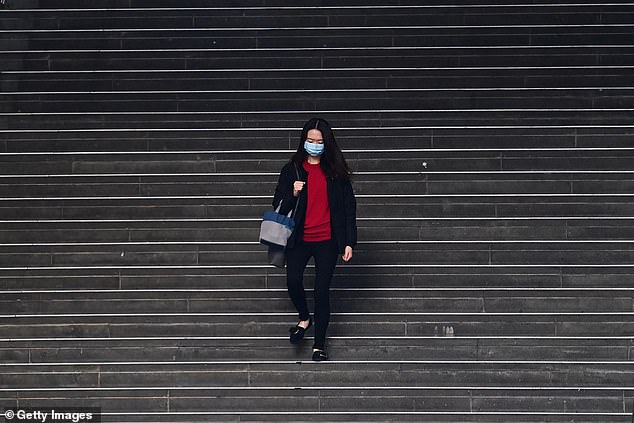 People have been banned from leaving their homes other than for essential reasons under Stage Three restrictions in Melbourne, leaving the CBD  strangely empty. Pictured: A woman arrives at Spencer Street Station on Monday 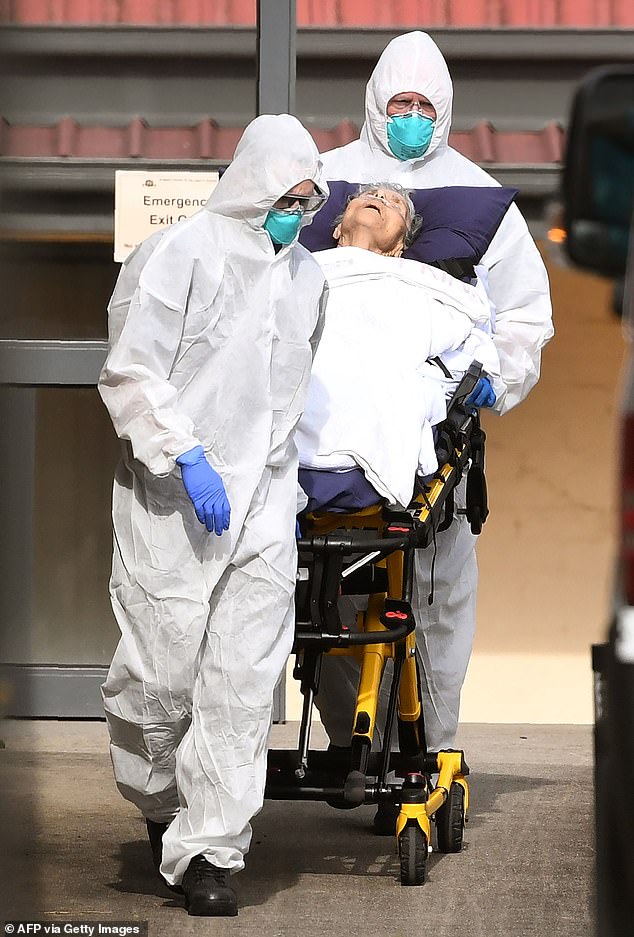 Ambulance officers take a resident from St Basil’s Home for the Aged in the Melbourne suburb of Fawkner on Monday. Aged care homes have been hard-hit with staff bringing in the virus

On Saturday, the premier said the implementation of mandatory masks in Metropolitan Melbourne and Mitchell Shire was ‘effectively our stage four’.

But a genuine New Zealand-style Level Four lockdown would be far more strict, and would see all businesses shut including construction sites, schools, retailers such as Bunnings and Kmart – and restaurant takeaways banned.

The Stage Four restrictions if imposed would be modelled on New Zealand’s lockdown rules, widely regarded as some of the toughest in the world.

ANU College of Health and Medicine Professor Shane Thomas said Victoria had been hoping for a downward trend after face masks were made mandatory, but it hadn’t yet happened.

‘As each day goes on it’s less likely,’ he told Daily Mail Australia on Monday night.

‘The next stage is a real lockdown where people have to stay in their houses – it won’t go down well.’

What would a New Zealand-style Stage Four lockdown look like?

New Zealand imposed ‘Level Four’ restrictions in March and April when Director-General of Health Ashley Bloomfield issued orders closing all but a small number of  ‘essential businesses’ to halt the spread of the virus.

People were not able to go to work unless they were in essential services, all others had to work from home or take a break.

Only pharmacies, grocery stores, medical centres and petrol stations were allowed to open. Butchers, bakers and fruit shops were told to close.

All schools, early childhood centres and universities were shut down. 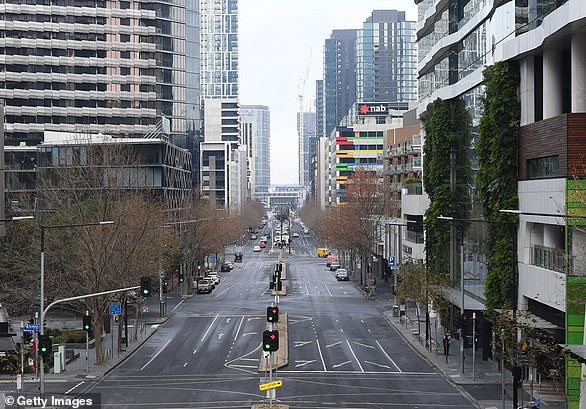 Empty streets are seen in the heart of Melbourne on Monday

All indoor and outdoor gatherings were banned.

People were not allowed to meet up with a friend for exercise or a visit, but were restricted to people in their ‘bubble’.

A person’s ‘bubble’ consisted of those people in their household only – or if they lived alone just one solo person in their area to visit.

Businesses such as Bunnings and Kmart were closed.

The High Court in Wellington is now hearing a legal challenge as of July 27, on whether the Level Four lockdown was lawful in New Zealand.

A judicial review is being sought by lawyer Andrew Borrowdale, who is arguing Mr Bloomfield exceeded his powers under the Health Act in making everyone stay home and closing almost all the businesses. The case is expected to last three days.

A Stage Four lockdown has not been defined in Australia and has never before been seen –  but the Victorian Premier is now considering it out of necessity in halting the rapidly spreading virus before it overwhelms the health system.

Professor Thomas said a major problem for Victoria was in getting rapid test results.

He said some people had waited up to eight days to get a result, and that meant people were getting tested but continuing their everyday lives and not quarantining until the result days later.

‘Why is the testing so slow?’ he said. ‘This is an administrative thing … it needs to speed up rapidly – what’s wrong with same day results?’

Professor Thomas said Victorians would be more co-operative waiting one day for results than five or six days.

Victoria’s Department of Health and Human Services says on its website it usually takes between one and three days to get a result, although sometimes there can be delays.

‘Victorian and interstate labs are working around the clock to process all the tests, but with so many coming in every day, sometimes it takes a little longer to confirm the results,’ the website said. 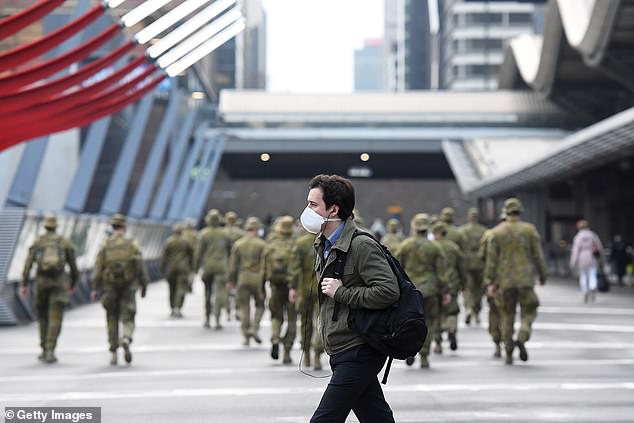 Masks are now compulsory in Melbourne and the Mitchell Shire. Pictured: a man walks through the Melbourne CBD on Monday in front of Australian Defence Force personnel on duty to help with the coronavirus response 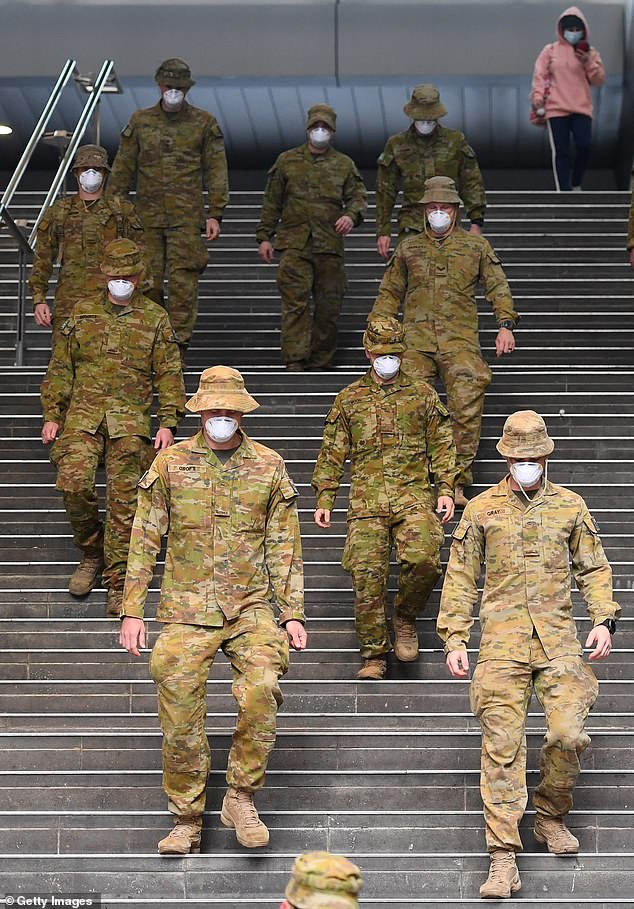 Health experts believe a short sharp lockdown to rapidly get Victoria’s case load down as New Zealand did might be tough initially, but better in the long term than extending ineffective partial restrictions indefinitely.

Premier Andrews warned Melbourne’s six-week lockdown, which began on July 9, may need to be extended as the virus keeps spreading.

On Monday he urged people not to go to work if they are ill after outbreaks were discovered in meatworks, aged care homes, law firms and other workplaces.

The premier said the next stage of restrictions may include shutting down industries where outbreaks are happening such as the freight, logistics and warehousing sectors.

‘Next steps may well have to include closing a number of these industries if we continue to see people attending work,’ he said.

*  532 new cases, and the 22nd consecutive day of a triple-digit increases, taking active cases across the state to 4542

* Six more deaths, bringing the state’s toll to 77 and the national figure to 161.

* Five of the deaths have been linked to aged care outbreaks.

* More than 1.5 million tests have been processed to date – or one in five Victorians 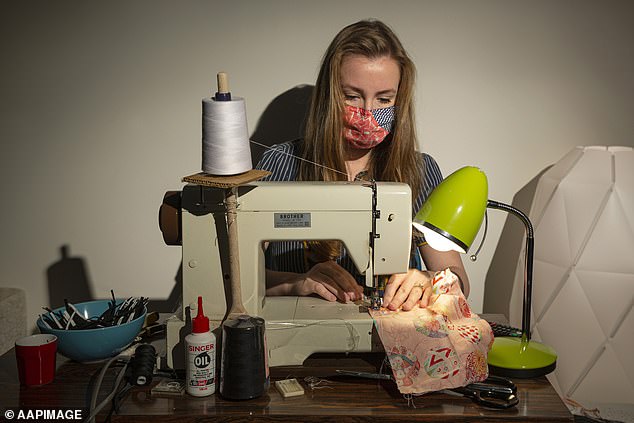 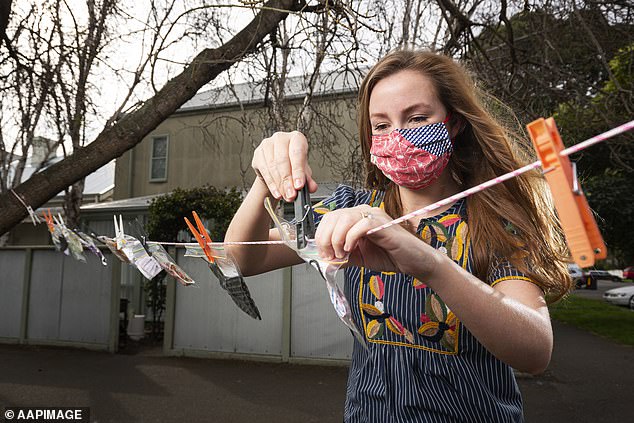 National deputy chief medical officer Nick Coatsworth said the lockdown should have brought case numbers down by now but coronavirus is ‘deeply embedded’ in Melbourne.

‘The virus is deeply embedded within the community in Victoria,’ he told Nine’s Today program.

Aged care centres have been particularly hard-hit with 683 active cases across 61 nursing homes, endangering elderly people, who are the most vulnerable to infection.

Most nursing homes are run by private companies and much of the spread has been from staff bringing the virus in from the community.

Victoria’s Department of Health and Human Services has voiced concerns about poor protective equipment usage in some non-government services.

Several people have died at the St Basil’s Homes for the Aged in Fawkner and the operator has pleaded with authorities to evacuate residents to hospital.

At the nearby Epping Gardens aged care home 83 people – 61 residents and 22 staff have tested positive.

A further 107 nursing homes were visited by the Aged Care Quality and Safety Commission  between March and May to assess their coronavirus readiness after being assessed as ‘high risk’, the Herald Sun reported.

The Victorian Aged Care Response Centre has been established over the weekend to co-ordinate the response between state and federal agencies. 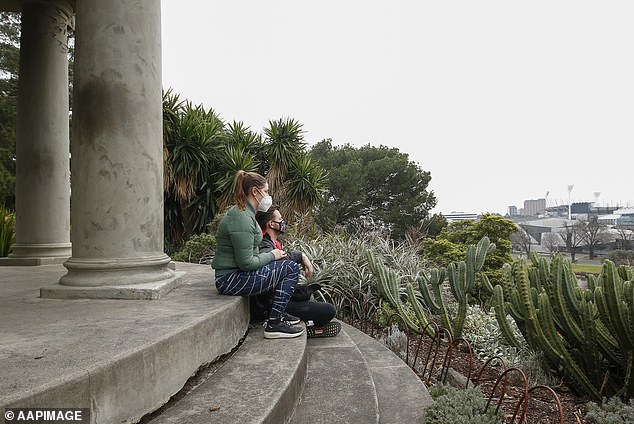 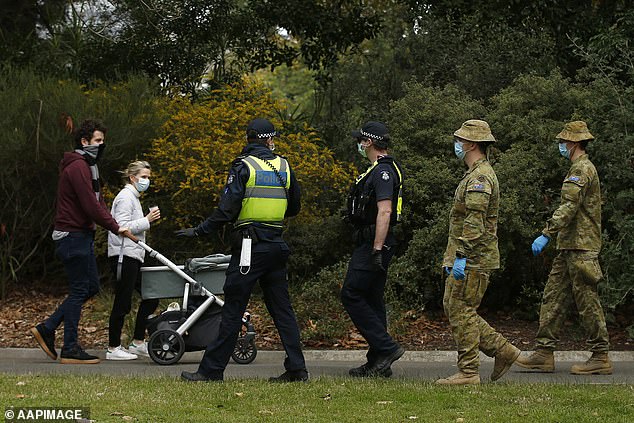 Medical experts had tough criticisms on Monday for anti-mask activists and conspiracy theorists who ridiculously suggest the coronavirus is a hoax.

‘They are a threat to public health,’ said Professor Raina MacIntyre the head of Biosecurity at the University of New South Wales’s Kirby Institute.

ANU College of Health and Medicine Professor Shane Thomas said the world’s 16.4 million confirmed coronavirus sufferers would disagree with the people that say the virus is an over-hyped hoax.

‘And in terms of the face mask refusers, they’re basically pursuing their own selfish interests at the expense of other people.

‘I think they should stop it and mask up.’

Premier Andrews said the more you argue with conspiracy theorists, the more oxygen you give them.

‘I think people can judge for themselves the efficacy, the credibility of people who are runnning those sorts of keyboard warrior campaigns,’ he said on Monday.

Becoming exasperated, he added: ‘One more comment about human rights –  honestly it’s about human life and if we continue with this stuff – standing in the car park of Bunnings reading whatever nonsense you’ve pulled up form some obscure website,’ before saying he didn’t want that to be the focus of media reports and changing the subject.

Led by Federal Chief Nursing and Midwifery Officer Alison McMillan, it will oversee the handling of outbreaks.

Prime Minister Scott Morrison said Victoria ‘has a long way to go’ before the huge daily totals are reduced.

‘We are still seeing case numbers at elevated levels and so, as we have seen from other jurisdictions, when you get community-based transmission, it does take some time to get that down,’ he said on Monday.

Mr Morrison said Premier Daniel Andrews ‘will be taking advice’ from health experts on whether lockdown will need to be extended and called on Victorians to follow the state’s lockdown rules to help stop community transmission.

* Nobody can go in or out of Melbourne or the Mitchell shire other than for work, medical care, caregiving and shopping for essential food

* Police will monitor traffic and issue on-the-spot fines of up to $1,652 for individuals and up to $9,913 to businesses for breaches

* Residents must only leave their homes for four reasons: shopping for food and essential items, care and caregiving, daily exercise, work and study

* Religious services must be broadcast online

* Weddings can have four people plus the celebrant

* As of July 22 face masks or face coverings are mandatory in public, breaches are punished with a $200 fine

* No visits to others or visitors allowed other than care giving, unless it is your intimate partner (there is no ban on bonking)

* You cannot go to your holiday home. Holiday accommodation and camp sites are closed

* Restaurants and cafes are takeaway only

* Shopping centres are open but you must stay 1.5m apart

* Pubs, bars and nightclubs are shut, as are entertainment and cultural venues such as cinemas, museums and casinos