Ministers are using mantra of ‘following the science’ as a defence to answer difficult questions about the coronavirus, Professor Brian Cox today claimed.

Prime Minister Boris Johnson and other Number 10 officials have often remarked in response to the pandemic that they have been guided by the science.

‘The science’ Professor Cox referred to is that which comes from the government’s SAGE committee, an independent panel that advises ministers.

The phrase has been used repeatedly when explaining why the lockdown was not implemented at an earlier stage and as a defence for allowing Cheltenham Festival to go ahead in mid-March, for example.

However, Professor Cox, who prides himself on relaying science to the public, said ministers should not use the ‘simple’ message as a way of avoiding critique.

He said blaming scientists on decisions that politicians had made themselves risks undermining public trust in science as a whole.

Ministers are using mantra of ‘following the science’ as a defence to answer difficult questions about the coronavirus outbreak, Professor Brian Cox claims 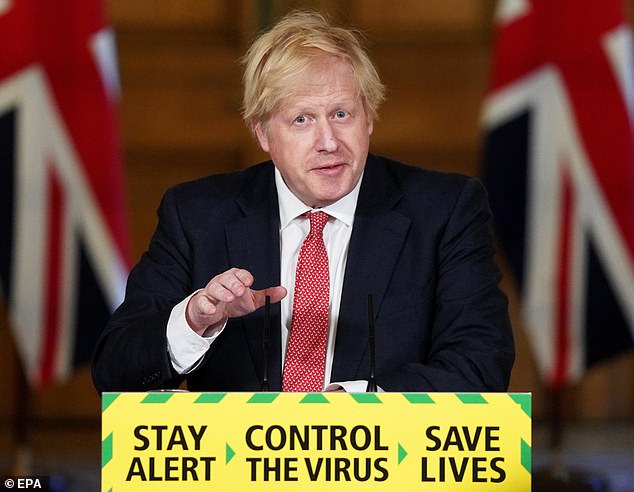 Boris Johnson, Matt Hancock, Dominic Raab and many other officials have claimed to be ‘following the science’ for every step of the handling the crisis

Speaking at a virtual Science and Media Centre press briefing, Professor Cox said: ‘My personal view is the trap that is perhaps being fallen into is that it’s a very easy defence.

‘I’ve seen it on several interviews with several different politicians. It almost seems sometimes like a defence that some ministers appear to have been coached to deploy, when asked a difficult question.’

The professor of particle physics in the School of Physics and Astronomy at the University of Manchester said he is concerned a ‘straightforward defence to a difficult question’ masks a whole area of debate that will have gone on behind the scenes.

The Scientific Advisory Group for Emergencies (SAGE) is a team of advisers who pull together scientific research to advise decision makers on what to do next.

They discuss their findings with ministers during COBRA meetings, which directs the government’s response to the emergency.

WHEN HAVE MINISTERS SAID ‘FOLLOWING THE SCIENCE’?

Prime Minister Boris Johnson said on March 12 there was ‘no reason’ to ban mass gatherings in response to Scotland and Ireland deciding to do so.

He said: ‘There is very little epidemiological or medical reason at the moment to ban such events… It is very important that we’re guided by the science.’

He accused other countries of ‘populist’ measures that ‘don’t have the right impact’, but conceded that Britain will soon need the same tough steps, as it was only a ‘little behind’ neighbours.

At Prime Minister’s Questions, Dominic Raab responded to accusations by Labour leader Keir Starmer that the government had been ‘slow’ to act on lockdown, testing, and protective equipment by saying: ‘We have been guided by the scientific advice, the chief scientific adviser, the chief medical officer, every step along the way.’

Health Secretary Matt Hancock said the government was reviewing scientific advice about the public use of face masks after several other countries had told citizens to use them.

‘We follow the science, throughout this, building on that science, and the science develops as we learn more about the virus,’ Mr Hancock said in a reply to a question at the daily press conference.

Mr Hancock claimed allowing the Cheltenham Festival – which has been blamed in part for the spread of the virus – to go ahead from March 10-13 was backed by science.

He said on LBC radio: ‘We followed the scientific advice and were guided by that science. Broadly, I think we took the right measures at the right time.’

But Professor Cox,a  former member of the bands D:Ream and DARE, emphasised there are a number of other influences, and that decisions are ultimately made by politicians, not scientists.

‘So given that, then it is too simplistic to just say, in response to a difficult question, “we are following the science”.’

Mr Johnson, Health Secretary Matt Hancock, Foreign Secretary Dominic Raab and many others have claimed to be ‘following the science’ for every step of the handling the crisis – particularly when attempting to excuse a delayed lockdown.

The Government finally bowed to mounting pressure and released the names of 50 experts across many fields who have sat in regular meetings during the pandemic on May 4 – with just two refusing to be identified.

There have been calls for documents considered by SAGE be made periodically public so the basis of decisions can examined.

Professor Cox agreed there should be transparency in decision making and for the scientific advice given to the Government to be available for the public to see.

‘We need to see how ministers made the decisions, and how they may have changed their minds as new knowledge became available, because this is the way to enhance the public trust,’ he said.

But he added: ‘It’s very tempting, I think, to blame the science if a decision is made which subsequently turns out to be suboptimal in some way.

‘But, this will have, I think, serious long-term consequences because it undermines public trust in science.

‘Ministers take a decision on not only the input of the science, but the economy and people who model behaviour. Decisions should be made on all the complex factors that make up a society.’

Previously there have been questions surrounding how much weight is given to science when making decisions in the absence of documents explaining the process.

A SAGE member has himself emerged as a major critic of the Government’s handling of the outbreak and has publicly clashed with Sir Patrick.

In early April, Professor John Edmunds, an infectious disease expert at the London School of Hygiene and Tropical Medicine, claimed that a total lock-down was not looked at until the middle of March when there had been opportunities to do it earlier.

He said that from the outset work by scientists had shown that, with only limited interventions, the virus would trigger an ‘overwhelming epidemic’ in which Britain’s health service was not going ‘to get anywhere near being able to cope with it’.

‘That was clear from the beginning,’ he said, adding: ‘I do think there’s a bit of a worry in terms you don’t want to unnecessarily panic people.’

The claims were later put to Sir Patrick live on television, where he said they were ‘not correct’.

Professor Cox, the Royal Society professor for public engagement with science, said that in the case of COVID-19, there are still a large number of holes in ‘the science’.

It is too early for even scientists to have all the answers, and therefore cannot be relied upon as an excuse for decisions.

‘Nothing would give us greater pleasure than finding solutions to these very very complex problems that are affecting society, but at the same time, one has to remember the process of science is uncertain,’ he said.

‘I have no doubt that, in the not so long term hopefully, but certainly eventually we will overcome it as we have many other adversities.’

Earlier this month SAGE published another trance of papers along with the names of most of its members.

But according to a Government-supplied list it left more than 90 that remain secret.

They include advice for ministers on stopping flights from certain countries, on when to stop contact tracing, and another on the impact of school closures.

The list also includes unpublished documents on the use of face masks, the risk of pets passing on the virus, and advice on restricting flights from specific countries.

These are all highly contentious issues as the death toll mounts and the Government seeks a way out of the current lockdown.

Additionally, some of the documents released previously included heavily redacted pages, including one on how to relax lockdown measures.