Coronavirus CAN enter the body through the eyes

A team led by Johns Hopkins University School of Medicine have now found the eyes produce ACE-2, making them a target for the virus.

It may explain why some patients have suffered conjunctivitis – an inflammation of the eye which causes it to become red and infected.

Not only could the virus enter the body through the eyes, but tears may serve as a spread of infection, scientists said.

The team was led by Lingli Zhou of the Department of Ophthalmology, Johns Hopkins University School of Medicine, Baltimore.

They analysed ten human post-mortem eyes from people who did not die of COVID-19 for the expression of ACE2 (angiotensin-converting enzyme 2).

ACE-2 receptors are structures found on the surface of cells in the lungs and airways which work with an enyzme called ACE (angiotensin-converting enzyme) to regulate blood pressure. 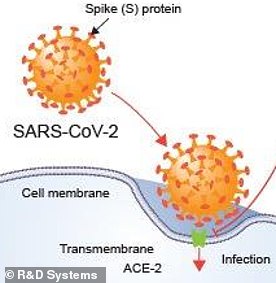 People who have higher than usual numbers of ACE-2 receptors may include those with diabetes or high blood pressure because they have genetic defects which make them produce more. Emerging evidence shows that smokers may also produce more.

All eye specimens expressed ACE-2 in the tissue that lines the inside of the eyelids, called conjunctiva, the clear outer layer of the eye, called the cornea, and the  limbus, which is the border between the cornea and the white of the eye.

TMPRSS2 was also expressed, according to the pre-print paper on MedRxiv yet to be reviewed by other scientists.

Dr Zhou and colleagues wrote: ‘Together, these results indicate that ocular surface cells including conjunctiva are susceptible to infection by SARS-CoV-2, and could therefore serve as a portal of entry as well as a reservoir for person-to-person transmission of this virus.’

The research was triggered by ‘extensive speculation’ that eye surfaces are a possible site of virus entry.

Although the virus primarily spreads through droplets of saliva or discharge from the nose from an infected person lands on the insides of another person’s nose or mouth, scientists have said it’s entirely possible it could enter through the eye.

Reports have suggested that COVID-19 may cause conjunctivitis, which was a symptom in around 30 per cent of patients in one study.

The researchers explained this could be as a result of the virus travelling from the respiratory tract to the eyes – a secondary complication often linked with a virus.

But it could also be a direct result of the virus attacking the eye cells in the first place by binding to ACE-2 receptors.

‘Infection of ocular surface cells could lead to the eye as being an important carrier, with ocular virus shedding constituting a significant mechanism for infection of other individuals,’ they wrote.

‘This highlights the importance of safety practices including face masks and ocular contact precautions in preventing the spread of COVID-19 disease.’

It was not specified if the general population would benefit at all from eye protection, or if the academics meant health workers specifically.

Medics on the pandemic frontline are supposed to wear goggles or face visors in order to protect their eyes.

Doctors first warned the killer coronavirus could be spread through the eyes in January, when the epicentre was in Wuhan, China, and had reached only a handful of other countries.

Just 26 patients have died in the outbreak in China when doctor Wang Guangfa said he thought he had contracted the SARS-like infection because he wasn’t wearing protective goggles.

Several days before the onset of pneumonia, Dr Wang – a Peking University respiratory specialist – complained of redness of the eyes.

Paul Kellam, professor of virus genomics at Imperial College London, told MailOnline at the time it was ‘absolutely possible’.

‘If you have droplets sneezed at you, they will wash from your eye to your nose,’ he told MailOnline. ‘Your eye connects to your nose through the lacrimal duct.

‘If you suffer from allergies and if your eyes run, so will your nose. Or if you put medication in your eyes, you’ll taste at the back of your throat.

‘It isn’t unusual for flu and other viruses to be transmitted this way. You can also get respiratory infections through the eye.’