Coronavirus: Children are now being hit by ‘long Covid’ symptoms too

It has, almost since the start of the pandemic, been the mantra of experts when it comes to Covid-19 and the threat it poses to children: they’re more likely to get hit by a bus than suffer severely from the virus.

And so in April, when Lois Benson’s two young sons developed a cough and a slight temperature, she was initially unconcerned. ‘I just gave them Calpol,’ says the 46-year-old air ambulance manager from Aldridge in the West Midlands. But Toby, seven, and Josh, six, went downhill rapidly.

‘At first, 111 [the NHS’s non-emergency helpline] told me to stay at home, but they just seemed to get worse and worse,’ she recalls. Finally, with the boys ‘almost unresponsive’ in bed, with temperatures soaring to 40C, she called 999. They were taken to hospital by ambulance, where they were given oxygen and kept in overnight.

Lois admits that while sitting by their hospital beds she had feared the worst – and when they pulled through, the relief was indescribable. But, shockingly, this wasn’t the end of their ordeal.

Now, seven months on, Toby and Josh are still suffering, sleeping constantly and unable to go back to school. The boys have developed serious stutters, complained of headaches and have begun repeating words over and over again.

Toby and Josh Benson are still suffering, sleeping constantly and unable to go back to school seven months after battling coronavirus in hospital

‘Just when I thought they were getting better, they went downhill again,’ says Lois. ‘I’ve been caring for them non-stop for seven months now and I’m terrified they’ll never be well again.’

It seems that Toby and Josh, who were ‘normal, active, fun-loving children before all this’, are among the youngest victims of what many are calling long Covid – a collection of debilitating symptoms that linger for weeks or even months after the initial infection has subsided. Despite thousands of adults reporting such problems, doctors seem mystified and unable to find anything physically wrong with them.

And the worried parents of youngsters with the condition tell a similar story: many have been told their children are simply suffering from anxiety or growing pains.

‘It’s been so overwhelming,’ said one parent of a teenager who has been suffering symptoms since first becoming sick in March. ‘We have a child chronically ill and absolutely no support. Nobody can tell us what is wrong with her.’

The Mail on Sunday was among the first to report on the long Covid phenomenon back in May, but it has now received scientific attention, with results from a UK study published last week showing that one in 20 Covid sufferers has experienced symptoms more than three months after infection. Problems vary, but adults have commonly reported fatigue, breathing problems, heart palpitations and brain fog.

The study, carried out by Professor Tim Spector, a genetics expert at King’s College London, collected information from 4.2 million users of the Covid Symptom Study app – but it does not include data on under-18s. The NHS has announced plans to provide specialist services for patients with long Covid but, at present, none of these clinics will be open to children.

‘This is a massive blind spot,’ says Dr Nigel Speight, a paediatric specialist in chronic fatigue syndrome. ‘If adults can have long Covid, then children can too.’

Now, for the first time, a small-scale survey has provided a clearer picture of the impact of long Covid on families across the country.

Frances Simpson, whose two children have been unwell since catching the virus in March, polled parents on social media groups asking if their children had experienced similar symptoms. In all, 162 parents responded, of whom 86 per cent stated their children had ongoing symptoms more than three months after exhibiting the first signs of infection. Frances, a psychology lecturer at Coventry University, hopes her findings will spur further research.

She said: ‘This problem can affect children, badly.’

Frances caught Covid-19 in March, and a while later so did both her children. Her ten-year-old son, Magnus, suffered a temperature, insomnia, headache, back pain and a metallic taste in his mouth. A few days later her nine-year-old daughter, Saskia, came down with the virus, and for weeks was unable to eat and had to be helped out of bed by her mother.

‘The whole thing was traumatic,’ says Frances. ‘I worried they weren’t going to get better.’

After a month their symptoms subsided but, in a pattern described by many long Covid sufferers, soon returned. Saskia began having breathing problems and rashes broke out across her body.

Frances took her daughter to a paediatrician, who diagnosed eczema. Another doctor gave Saskia a blood test but said there was nothing to be concerned about. 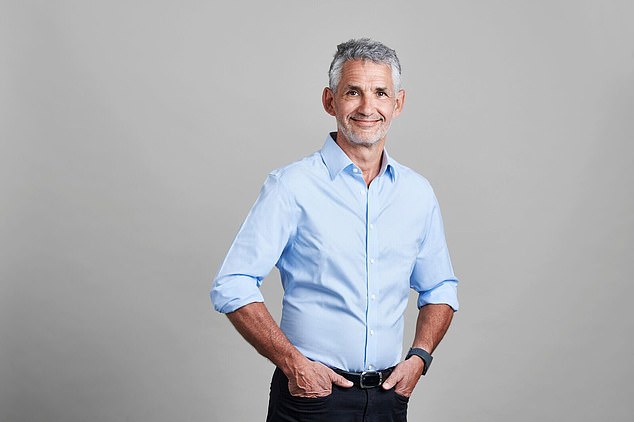 Results from a UK study carried out by Professor Tim Spector, pictured, published last week, show that one in 20 Covid sufferers has experienced symptoms more than three months after infection

Frances says her daughter now has ‘attacks’ where she struggles to breathe normally. She also complains of stomach aches and constant tiredness, which has caused her to struggle at school. ‘It’s awful to see your child not able to do anything,’ says Frances.

It is universally recognised that children are far less likely to catch Covid-19 than adults. Studies show they are half as likely to be infected and even less likely to suffer serious symptoms – with only one per cent of those under the age of 19 hospitalised.

But experts point out that any child who catches Covid-19 runs the risk of long Covid – and it is well recognised that many viruses run the risk of causing long-lasting illness. While it may take time, the majority of those hit by such problems do recover.

Dr Speight said: ‘Long Covid exhibits some unique symptoms, but the overall pattern is the same as any post-viral illness, and children suffer from those constantly.’

Most people will experience some level of post-viral fatigue at some point in their lives.

‘At its mildest, it’s that tired, slow feeling you get after a cold or the flu,’ says Dr Charles Shepherd, medical adviser to the ME Association, a chronic fatigue charity. ‘For most people that goes after a few weeks, but for some it lingers for months, sometimes years.’

Scientists are still unsure what triggers post-viral fatigue but many theorise it is caused by the immune system continuing to try to fight the virus after it has left the body. But post-viral fatigue can come from even mild illnesses, meaning even children who don’t suffer severely with Covid-19 can be susceptible to a protracted illness.

This is certainly true for Kitty McFarland, a 15-year-old ballet dancer who has been bedbound since catching Covid-19 in April – despite having mild symptoms at first. Her mother Sammie, 44, says: ‘She used to be incredibly active and never had any health problems. Now she’s crushed with fatigue.’

Kitty initially had a slight temperature and a sore throat. Sammie’s main worry at the time was for her elder daughter, 22, who suffers from serious asthma.

As a precaution, to protect her sister, Kitty isolated in her bedroom for seven days. Sammie says it was only after that period that she began having problems.

Kitty began complaining of dizziness and heart pain. Her symptoms soon worsened and she collapsed several times. At one point her father had to carry her in from the garden because she couldn’t stand up on her own.

Eventually she stopped leaving her bed and her family started bringing her meals up to her. 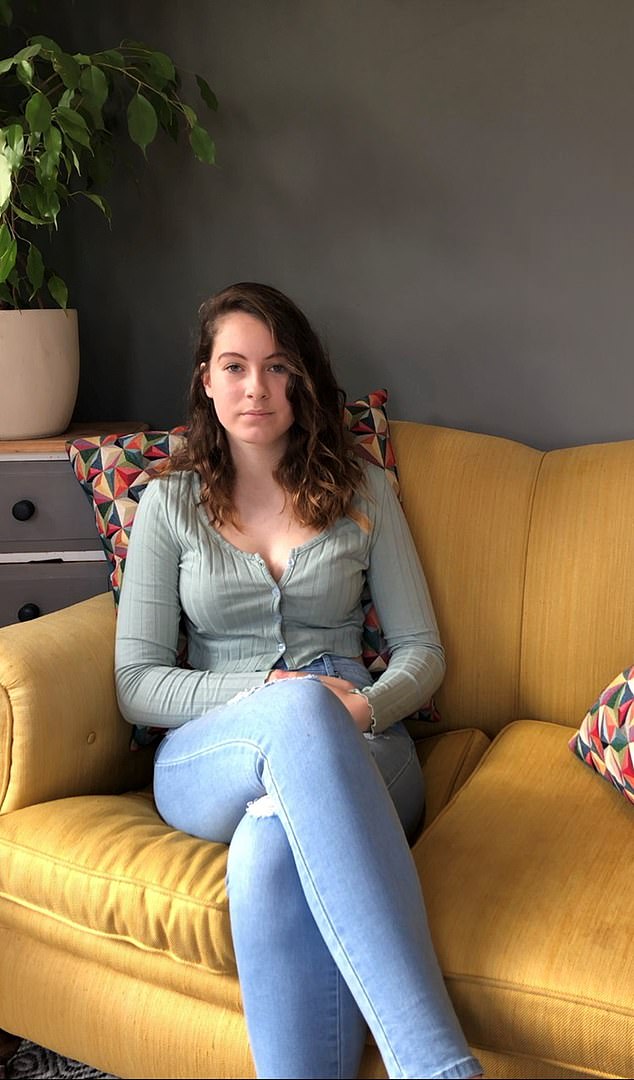 Kitty McFarland, a 15-year-old ballet dancer who has been bedbound since catching Covid-19 in April – despite having mild symptoms at first

When school restarted, Kitty was eager to return. But halfway through her first day back, the school rang Sammie and told her to come and pick her up. ‘When Kitty got home, she slept for four days straight,’ adds Sammie.

In May their GP carried out a home visit but could not find anything seriously wrong and a blood test showed nothing.

‘The one thing he noticed was Kitty’s heart rate would race every time she stood up,’ says Sammie. ‘He said it was abnormally high but couldn’t say what was causing it.’

The GP referred Kitty to a paediatrician in London and, despite the next available appointment being five months away, Sammie jumped at the chance. However, only last week, the specialist’s office contacted Sammie attempting to cancel the appointment because they said they doubted there was anything they could do to help.

Sammie insisted they attended, and travelled with Kitty from their home in Dorset to London. After a 90 minute consultation, and an original diagnosis of growing pains, the doctor conceded it may be long Covid but said he had no idea how to treat it.

Mothers Lois, Frances, and Sammie all worry that if they push doctors too much, they may be branded with a mental health disorder themselves. Fabricated or Induced Illness – formerly known as Munchausen syndrome by proxy – is a recognised disorder in which a parent or carer exaggerates, invents or causes an injury or illness in a child. It’s seen as a form of child abuse and, although no one knows what triggers someone to act this way, one theory is that it’s a way of gaining attention.

Dr Speight says it’s not uncommon for mothers, in particular, of children with post-viral conditions, to be accused of it.

‘It’s a story we’ve heard hundreds of times,’ he says. ‘Sadly, some doctors have little interest or expertise in chronic fatigue and are quick to dismiss concerns.’

Nearly half of all children with chronic fatigue so make a full recovery. ‘But in the meantime, these parents need support, not suspicion,’ adds Dr Speight.

Experts also say it is important that parents don’t immediately assume long Covid is the cause of problems, as this could lead to other, more treatable conditions, such as anxiety disorder, being missed.

Chronic fatigue expert Dr David Strain, based at the University of Exeter Medical School, is yet to see any children with long Covid because his clinic is for over-16s. But he worries that, as Covid infections surge again, so too will the number of patients suffering long-term problems.

He worrries the NHS could be blindsided: ‘There are few paediatric chronic fatigue specialists in the NHS, and this is definitely an area where we need more research.’

Dr Shepherd agrees: ‘These children deserve to be listened to.’