Children are just as likely as adults to get infected with the coronavirus and spread it to other people, a study has found.

In research that will come as a blow to Britain’s hopes of reopening schools any time soon, scientists in China found children are just as at risk of infection.

How COVID-19 affects youngsters has confused experts since the pandemic began because so few of them seem to get seriously ill or die after catching the virus.

This had led to speculation children were somehow protected from the disease or less likely to catch or spread it – something the Chinese research has dispelled.

The study, done in Shenzhen, found the virus’s ‘attack rate’ among children was 7.4 per cent, which was on par with the 6.6 per cent seen in the general population.

One scientist in England said the research was ‘important’ and showed that children ‘could expose parents, grandparents and teachers… risking a second wave’.

A study in Shenzen, China, found that infection rates are just as high among children as they are in adults. (Pictured: A woman and child walk wearing face masks in Beijing)

The researchers, who worked with Johns Hopkins University in Baltimore, Maryland, studied 391 people who caught COVID-19 in Shenzhen between January 14 and February 12.

They said ‘attack rates were similar across all age categories of infected contacts’.

People who lived with, or were contacts of, someone who had the virus were about equally likely to catch the illness of them regardless of their age, they found.

The proportion of someone’s contacts who catch the virus from them is the ‘attack rate’ and the scientists found it did not vary significantly depending on age.

People in their 60s appeared to have the highest attack rate, and it was elevated for those in their 50s and aged over 70, but for the younger age groups there was little difference.

Another figure that also stood out on the researchers’ data was that the proportion of people who tested positive but didn’t have the tell-tale fever was significantly higher among under-20s, suggesting they might be more likely to spread the virus without realising it. 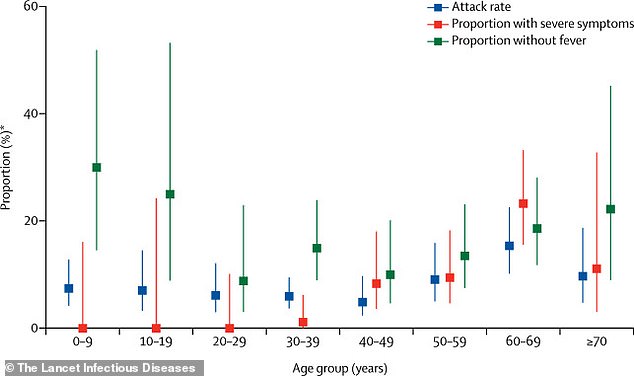 People in their 60s appeared to have the highest attack rate, and it was elevated for those in their 50s and aged over 70, but for the younger age groups there was little difference

An NHS memo this week warned doctors about rising numbers of children being hospitalised with an ‘inflammatory syndrome’ which appears to be linked to the coronavirus.

The memo warned of a rise in the number of children being admitted to intensive care with a ‘multi-system inflammatory state’.

In a storm, the proteins start to attack healthy tissue, which can cause blood vessels to leak and lead to low blood pressure.

The children being seen with the new syndrome often suffer from stomach pain, cardiac inflammation and ‘gastrointestinal symptoms’ – which could include vomiting and diarrhoea.

The cases share overlapping features of toxic shock syndrome and atypical Kawasaki disease, according to the memo that was sent around.

Two of the most common symptoms of Kawasaki disease include a rash and a fever. TSS also causes a rash, dizziness and diarrhoea.

Officials did not confirm how many cases have been spotted across the UK – but senior paediatricians have said there are just a ‘handful’.

It is unclear if any children have died from the condition.

In the paper, published in the British journal The Lancet Infectious Diseases, the researchers said: ‘Notably, the rate of infection in children younger than 10 years (7.4 per cent) was similar to the population average (6.6 per cent).

‘There was no significant association between the probability of infection and age of the index case.’

This meant that children were as likely as adults to both catch the virus and to spread it.

The researchers added: ‘Analyses of how cases are detected, and use of data on individuals exposed but not infected, indicate that infection rates in young children are not lower than the population average (even if rates of clinical disease are).’

Rates of disease do appear to be considerably lower in children than in adults and reports from hospitals worldwide show tiny numbers of children getting seriously ill.

Scientists are not totally clear on why this is, but suggest that a lack of age-related lung damage may be a contributing factor.

And people tend to get more seriously ill if they have other health problems such as high blood pressure or diabetes, which are rare among children.

The Shenzhen study throws cold water on any hopes there were that schools would open quickly and fully as the UK moves out of its coronavirus lockdown.

Education Secretary Gavin Williamson said the Government was considering reopening schools in a phased approach, a few year groups at a time, and attempting to maintain social distancing when classes resumed.

The vast majority of children, except those whose parents are essential workers like doctors and nurses, have been off school since the middle of March.

Evidence that children are just as likely to spread the virus as adults may force officials to reconsider how they move forward with schools.

Professor Simon Clarke, a virus expert at the University of Reading, told The Times: ‘This is an important paper. It means we should be extremely careful.

‘As children are carriers, reopening schools could expose parents, grandparents and teachers to infection and in turn anyone they might come into contact with… risking a second wave.’ 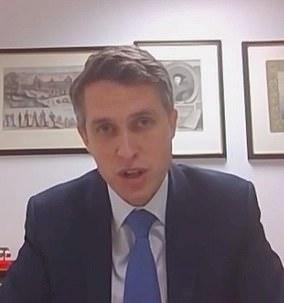 Schools across England will reopen in a ‘phased manner’ when the government decides the time is right to allow pupils to return, the Education Secretary said.

Gavin Williamson would not be drawn on a fixed date for when schools could be able to resume but ruled out the prospect of them opening over the summer holidays.

He told MPs: ‘I do expect schools to be opened in a phased manner. I also intend to be giving schools as much notice as possible.’

Schools, colleges and nurseries across the UK closed their doors to the majority of pupils, apart from the children of key workers, more than five weeks ago.

Education is a devolved issue which means the administrations in England, Wales, Scotland and Northern Ireland will be able to take their own decisions on the return of schools.

But it will be a key focus of the UK government’s lockdown exit strategy because resuming teaching will free up workers with children to return to their jobs and re-start the economy.

There appears to be a growing consensus that schools will have to stagger the return of pupils in order to comply with expected continued social distancing rules.

Nicola Sturgeon, the Scottish First Minister, has suggested school classrooms may have to be redesigned to allow pupils to sit at least two metres apart.

She also hinted classes could be split into different alternating groups, attending school on different days to keep numbers down.

It is thought another approach could see different year groups return at different times.

Addressing the Education Select Committee, Mr Williamson suggested he is on the same page as Ms Sturgeon.

‘We recognise that the idea of schools all returning on day one with the full complement of pupils is not realistic or practical,’ he said.