Coronavirus: Choirs told singing might be as risky as coughing

Singing might be just as risky as coughing when it comes to spreading coronavirus, a new study has found.

Singing, particularly in large groups for a prolonged duration, should be viewed as a ‘more risky practice’, a new paper by Scientific Advisory Group for Emergencies (Sage) has found.

Evidence suggests that singing can produce more aerosols, or droplet nuclei, than normal talking or breathing.

Covid-19 is spread through respiratory secretions, which can take the form of large droplets or smaller aerosols.

Singing, particularly in large groups for a prolonged duration, might be just as risky as coughing when it comes to spreading coronavirus, a new paper has found (file photo)

These are either inhaled directly or transferred by the hands from surfaces where they have been deposited.

The new document says that the smaller the particle, the further it can advance into the respiratory tract.

The authors said: ‘There exists some evidence to suggest that singing can produce more aerosols than normal talking or breathing; it may be more akin to a cough.

‘Singing for any appreciable amount of time therefore may present a risk for the creation of infectious aerosols and allow for infection transmission.’

But it is not clear if playing wind instruments poses the same risk, as the authors add that more research is needed into the risk of transmission from both activities.

This comes as Public Health England and the Department for Digital, Culture, Media and Sport have been coordinating a working group to explore safe resumption of singing and choirs.

Normally, around two million people regularly sing in the UK and there are a staggering 70,000 choirs.

At present, social distancing remains the most effective way to reduce transmission.

But rapid testing of people before congregation is not currently available and face masks are not compatible with singing, the paper says. 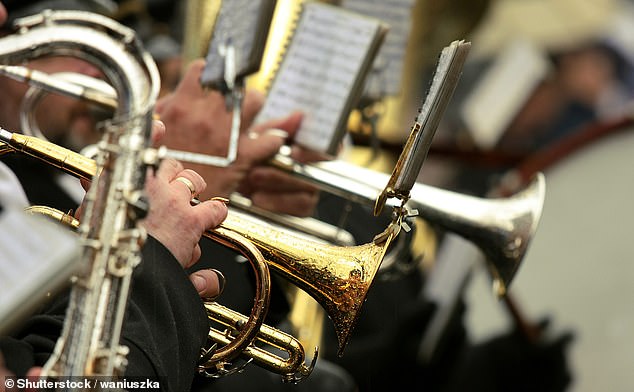 Evidence suggests that singing can produce more aerosols than normal talking or breathing, but it is not known whether playing wind instruments poses the same risk (file photo)

The authors said: ‘Even in outdoor settings, the wind can keep droplets airborne for longer and in a closely clustered arrangement where people are singing for a long period of time, this could still pose a risk.

‘Therefore, at the present time the safest way for groups to sing together is to i) sing outside, ii) use the 2m rule to socially distance and iii) avoid face-to-face positioning.’

This comes after the trial reopening of ‘high-risk’ areas including theatres and music venues was postponed by Boris Johnson on Friday amid fears of a second coronavirus wave.

The Prime Minister announced he is ‘squeezing the brake pedal’ on lifting the coronavirus restrictions.

He said: ‘Indoor performances will not resume. Pilots of larger crowds in sports venues and conference centres will not take place.’

The Music Venue Trust said: ‘We are saddened but not surprised to hear that live music events planned from Saturday 1 August in response to Government advice must now be cancelled.

‘Since May 2020, Music Venue Trust has repeatedly informed the government that live music events in grassroots music venues would be extraordinarily difficult to stage, not economically viable, and at risk of being cancelled at short notice during the current pandemic.’

Church of England bishops also announced at the start of July that large traditional carol services over the Christmas period could be banned this year. 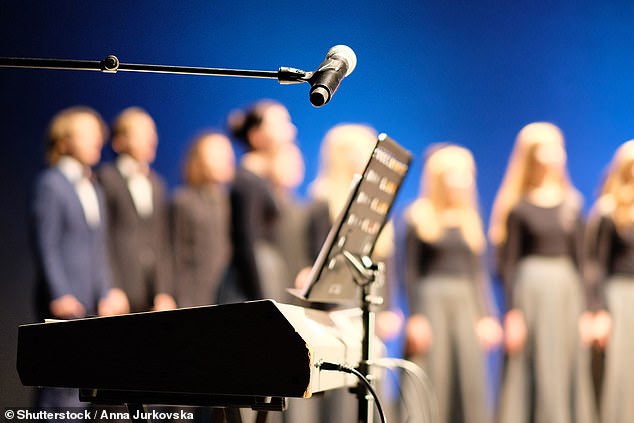 Church leaders warned that because of social distancing restrictions services during Advent in December and at Christmas ‘are inevitably going to look very different’.

But curbs on church services say there may be no hymns or choirs in places of worship, and wind instruments, such as recorders often played by children, or trumpets, may not be used.

They say that there should be only one singer, who must stand behind a screen, and the rules recommend that churches use recorded music in services.

A separate paper considered by Sage also recommends that performers in concert venues and theatres use more microphones.

There is evidence louder voices can produce more aerosols but it is not known if volume has an effect on how far they can spread.

Venues should keep the air well ventilated, restrict numbers of people in areas such as the foyer, bar and backstage and ensure surfaces are cleaned between performances.

They should also consider not using balconies, where the virus may build up, while staff members working on lighting rigs should wear masks.

It has also been recommended that singalongs involving the audience for a significant period of time should be avoided.