Coronavirus could spark the ‘deepest economic recession of our lifetimes’

The coronavirus pandemic could spark the ‘deepest economic recession of our lifetimes’ with global trade expected to plummet by up to a third in 2020, the World Trade Organisation warned today.

‘World trade is expected to fall by between 13 per cent and 32 per cent in 2020 as the COVID-19 pandemic disrupts normal economic activity and life around the world,’ the WTO said in a statement.

There were a wide range of possibilities for how trade would be hit by the ‘unprecedented’ health crisis, it added.

However, WTO chief Roberto Azevedo warned the downturn ‘may well be the deepest economic recession or downturn of our lifetimes’.

A 2019 file photo shows the sign outside the World Trade Organisation headquarters in Geneva, Switzerland. The WTO warned today that world trade is ‘expected to fall by between 13 per cent and 23 per cent’ due to disruptions caused by the coronavirus 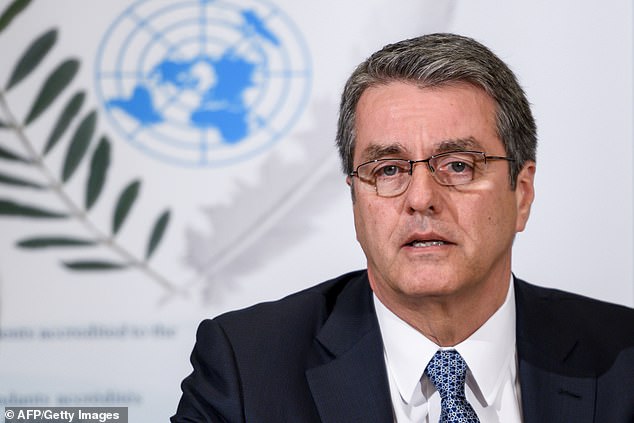 World Trade Organization (WTO) Director-General Roberto Azevedo delivers a press conference in Geneva on November 27, 2017. Today, Mr Azevedo warned the aftermath of the coronavirus pandemic ‘may well be the deepest economic recession or downturn of our lifetimes’ 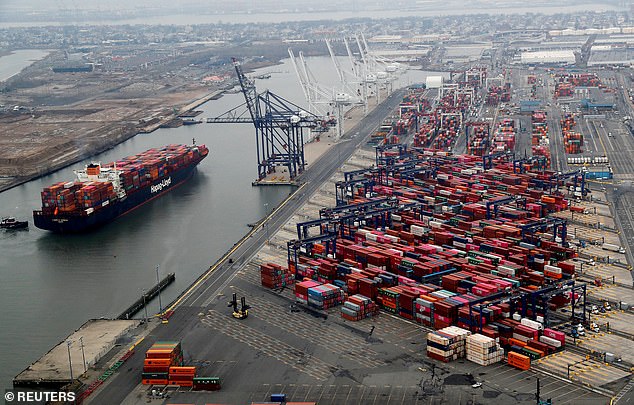 A container ship is seen at the port of New York and New Jersey, with hundreds of shipping containers stacked on land, in New Jersey, U.S. at the end of last month

In its main annual forecast, the 164-member WTO pointed out that trade had already been slowing in 2019, before the emergence of the novel coronavirus.

But the virus has now infected some 1.4 million people since late last year, killing more than 80,000 and forcing governments across the world to take radical measures.

More than half of humanity has been asked to stay at home and economic activity has ground to a virtual standstill in many places.

Global trade, already hit by trade tensions and uncertainties around Brexit, is expected to register ‘double-digit declines in trade volumes’ in nearly all regions this year, the WTO said.

‘This crisis is first and foremost a health crisis which has forced governments to take unprecedented measures to protect people’s lives,’ Azevedo said in a statement.

‘The unavoidable declines in trade and output will have painful consequences for households and businesses, on top of the human suffering caused by the disease itself,’ he said.

Before the current crisis, trade tensions, uncertainty and slowing economic growth weighed on global merchandise trade, which registered a slight decline of 0.1 per cent in 2019 after rising 2.9 per cent a year earlier.

The dollar value of world merchandise exports fell by three percent to $18.89 trillion, the WTO said.

World commercial services trade fared better last year, with exports in dollar terms rising by two percent to $6.03 trillion, but the expansion was far slower than in 2018, when services trade increased by nine percent, said the WTO.

But the situation has taken a dramatic turn since the new coronavirus first emerged in China late last year.

The WTO said that while the global shock might invite comparisons to the financial crisis of 2008-2009, the situation now was worse. 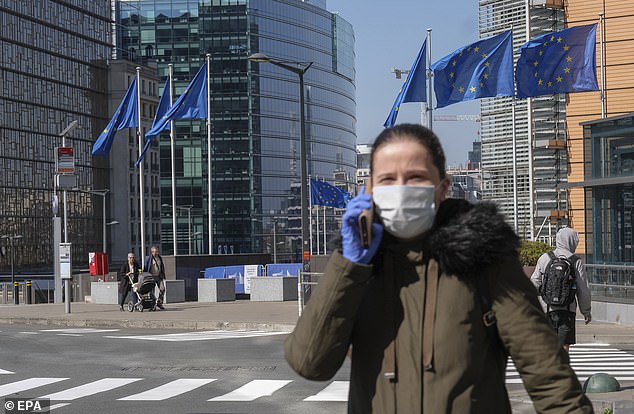 A pedestrian with a mask passes in front of the European Commission and Council headquarters in Brussels, Belgium, yesterday. Global trade was already affected by uncertainty around Britain’s departure from the European Union

‘Restrictions on movement and social distancing to slow the spread of the disease mean that labour supply, transport and travel are today directly affected in ways they were not during the financial crisis,’ it said.

‘Whole sectors of national economies have been shut down, including hotels, restaurants, non-essential retail trade, tourism and significant shares of manufacturing.’

An optimistic outlook posits that a sharp drop in trade will be followed by a recovery starting in the second half of 2020, said the organisation.

But the more pessimistic view is that the initial decline will be steeper and the recovery will be ‘prolonged and incomplete’.

‘Under both scenarios, all regions will suffer double-digit declines in exports and imports in 2020’, it said, adding that North America and Asia would be hardest hit.