Coronavirus deaths in America surge to 53,396 and the number of cases edge closer to 1 MILLION

More than 53,000 Americans have been killed by the coronavirus pandemic and confirmed cases are creeping closer to the one million milestone, as states start testing their residents for antibodies.

The US coronavirus death toll surged to 53,396 and infections reached 945,976 as of midday Saturday, with figures set to rise further as states begin to release their daily figures.

The daily rate of coronavirus deaths slowed to 2,113 Friday, down from 2,416 on Thursday and markedly lower than the US’s most fatal day on record from the pandemic when 2,524 Americans died on April 15.

The US coronavirus death toll surged to 53,396 and infections reached 945,976 as of midday Saturday, with figures set to rise further as states begin to release their daily figures

Confirmed cases are creeping ever closer towards the one million mark with 945,976 infections Saturday

The US continues to be the hardest-hit nation in the world, with both the highest number of confirmed cases and the highest death toll.

It has more than double the death toll of the next hardest-hit nations of Italy and Spain.

By comparison, Italy has recorded 26,384 deaths and Spain has 22,902 fatalities as of Saturday afternoon.

A predictive model relied on by the White House this week increased its projection of expected deaths in the US by August by 10 per cent to 66,000.

The University of Washington’s Institute for Health Metrics and Evaluation now expects the national death toll to hit 65,976 by August – 5,561 more than previously forecast.

The US’s epicenter for the crisis recorded a renewed spike in deaths Friday, after what had been a steadily declining daily death toll.

A further 437 people died from coronavirus in the state Friday, up from the 422 deaths recorded on Thursday.

Prior to Friday’s spike, the state had registered a fall in deaths for five days in a row.

Nursing home residents accounted for 19 of these deaths and 418 hospitalizations.

New York Governor Andrew Cuomo announced the rise in fatalities in a press conference Saturday, where he confirmed that antibody testing for New Yorkers started today.

Cuomo said the state is carrying out antibody testing in four downstate New York hospitals and on New York City transit workers and the NYPD from Saturday.

The state is also allowing independent pharmacists to conduct diagnostic coronavirus tests and opening up testing eligibility to all first responders, healthcare workers and essential workers. 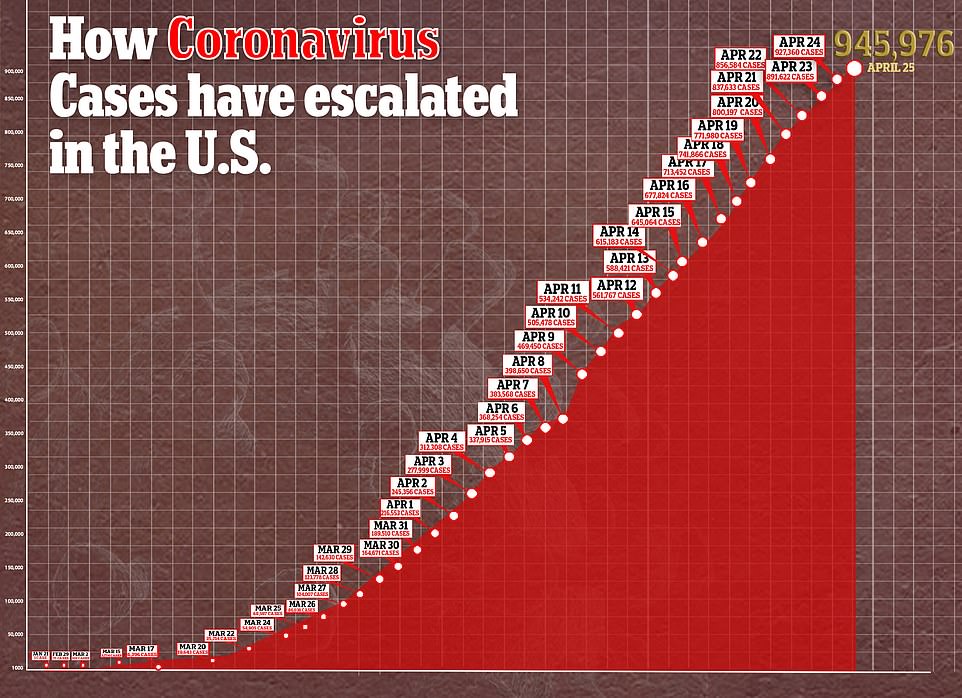 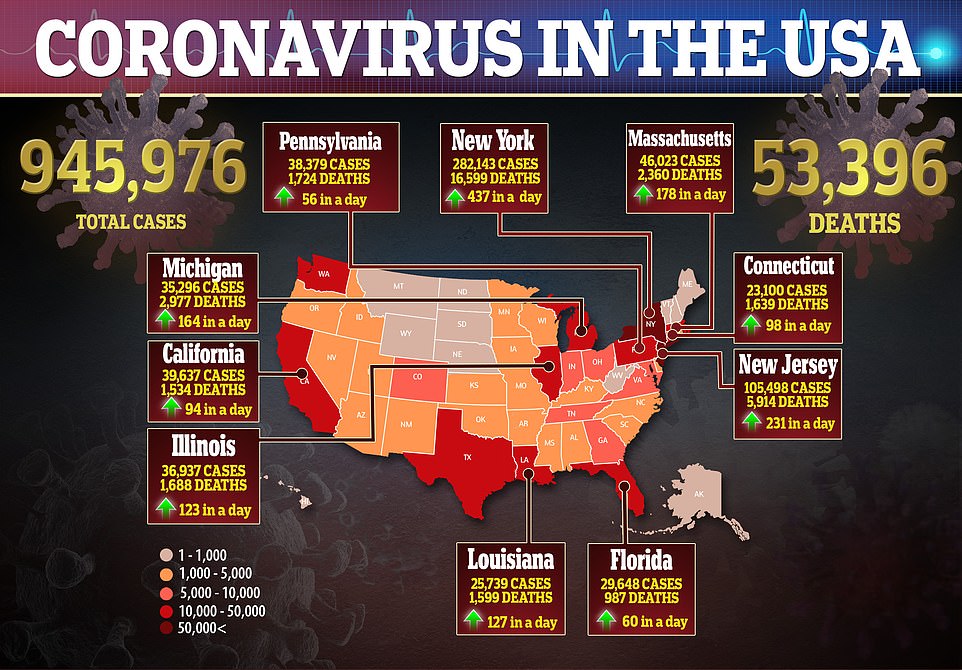 The state is now testing on average 20,000 people a day and arranged a template with the federal government this week to divide responsibility between federal and state governments.

New York state is carrying out more diagnostic testing per capita than any country in the world as well as more testing than the rest of the US combined.

The antibody testing, which tests for traces that a person has already had the virus, will begin Saturday downstate in some of New York City’s hardest hit hospitals as well as among the city’s police force and transit workers.

Cuomo also said no decision had yet been made about the lifting of New York’s social distancing guidelines but it would be discussed further next week as he works with other governors in the tri-state area to outline phased openings. 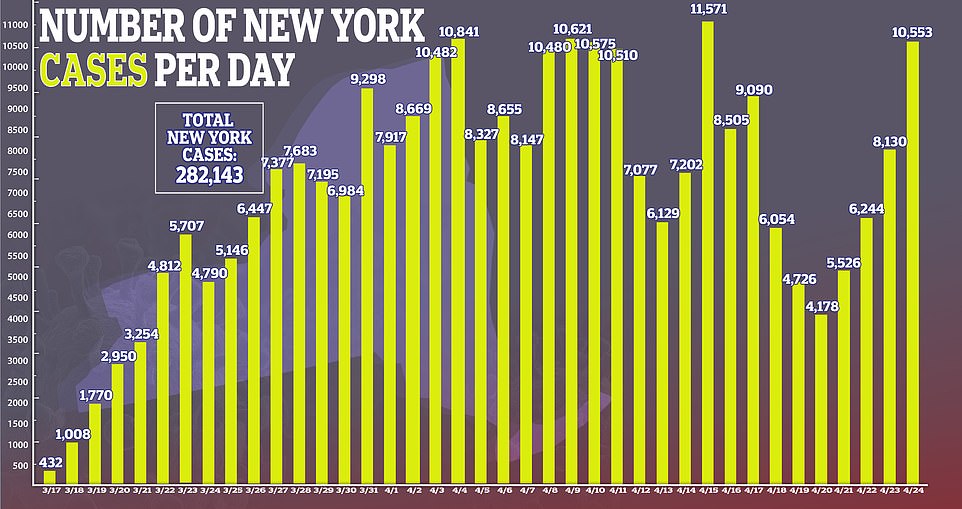 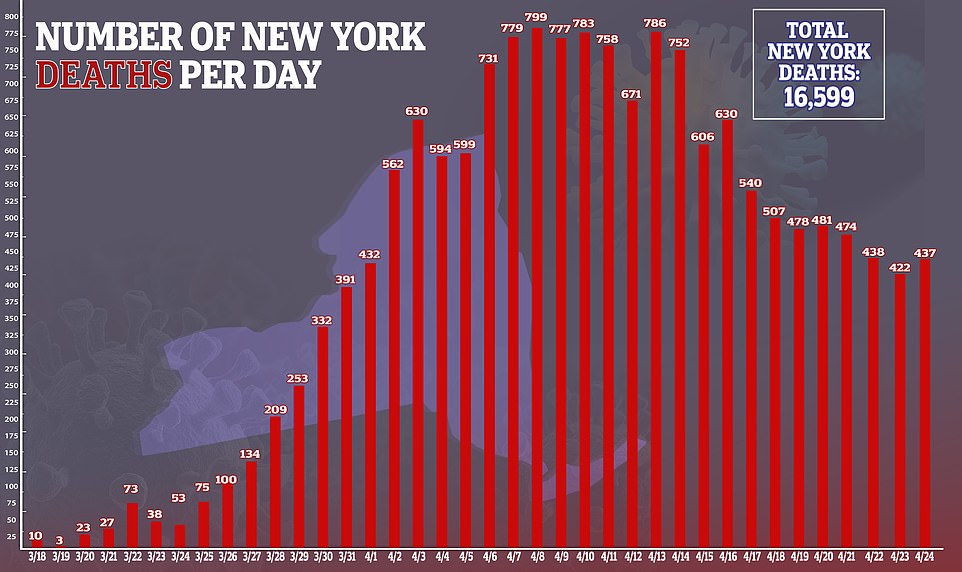 Other states across the nation have been less cautious with their reopening plans, as several governors have relaxed lockdown rules despite death and infection rates rising.

It comes as health experts and some governors in parts of the country have warned that a premature easing of restrictions on movement could trigger a surge in new cases.

Georgia became one of the first states to ease lockdown restrictions, as Republican Governor Brian Kemp cast CDC cautions and even President Trump’s criticism aside, to allow some non-essential businesses to reopen Friday.

But the scenes in Georgia were far from the enthusiastic uptake for which Kemp must have hoped, as many businesses kept their doors closed in protest against the move to reopen so soon.

Meanwhile, anti-lockdown protesters have taken to the streets across several states this week to demand an end to stay-at-home orders.

One of the country’s largest anti-lockdown protest was held Friday as thousands swarmed Wisconsin State Capitol and residents in South Carolina held a mobile protest at the Statehouse.

A massive crowd of protesters gathered to protest stay-at-home orders enforced by Gov. Tony Evers amid the COVID-19 pandemic in Madison.

They took a particular grievance with Gov. Evers recent extension of Wisconsin’s stay-at-home orders, which have been continued through May 26.

Meanwhile, in California residents flocked to open beaches during a heatwave Friday despite Gov. Gavin Newsom’s pleas for them to stay home and the state recording its deadliest day yet of the pandemic with 115 fatalities in the 24 hours from Wednesday to Thursday. 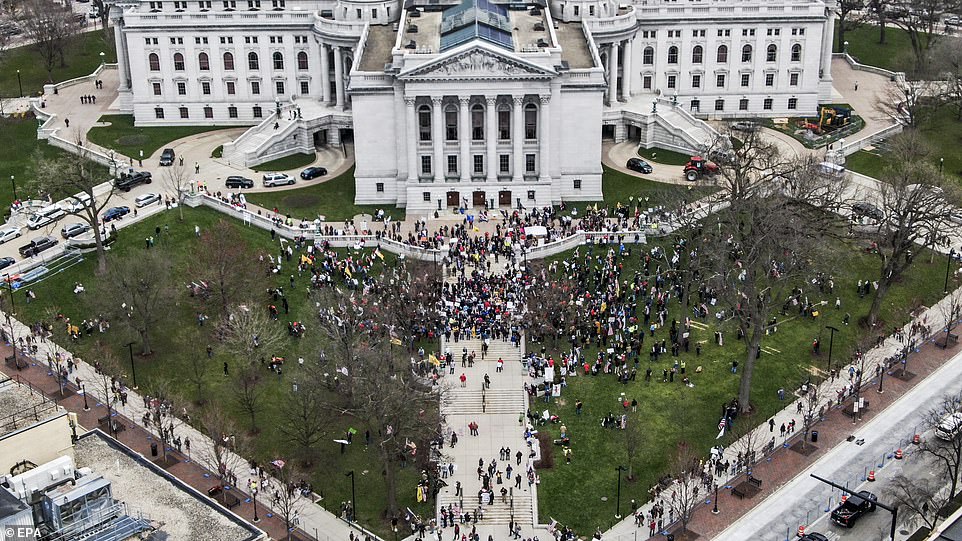 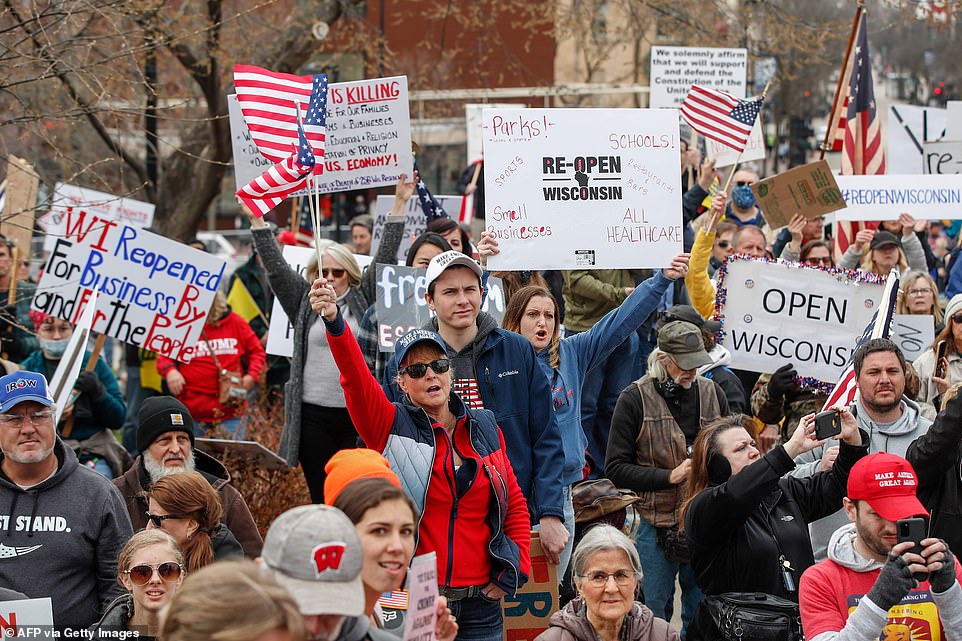 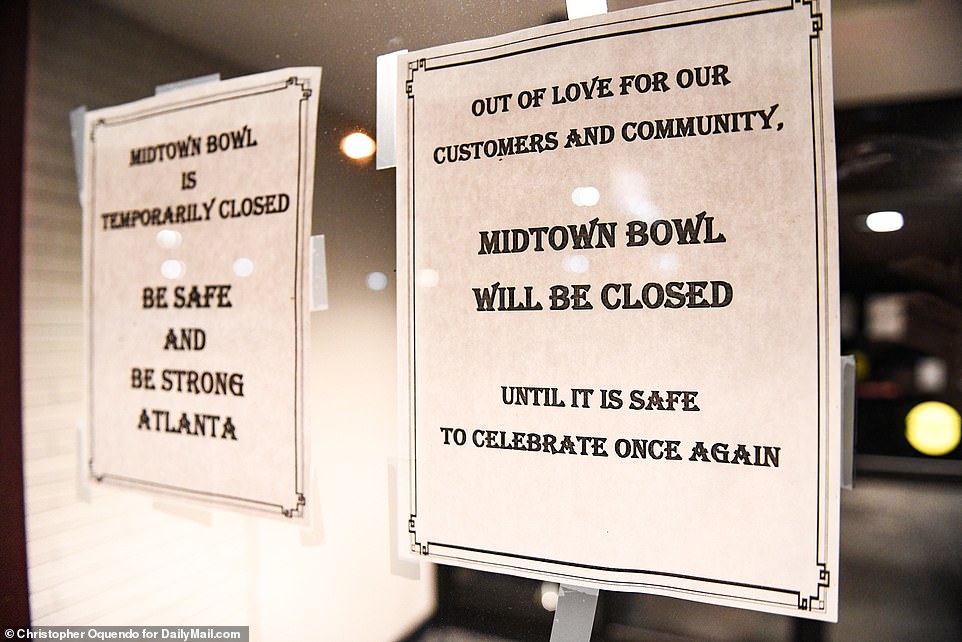